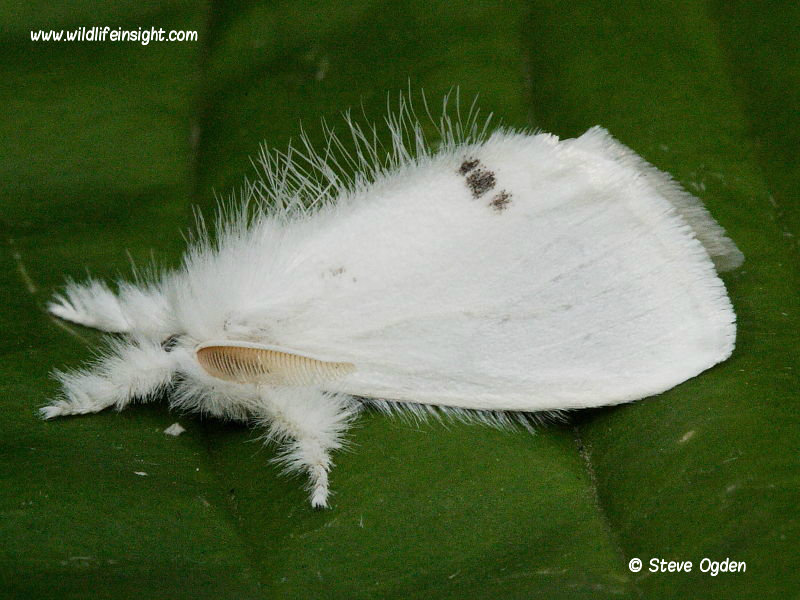 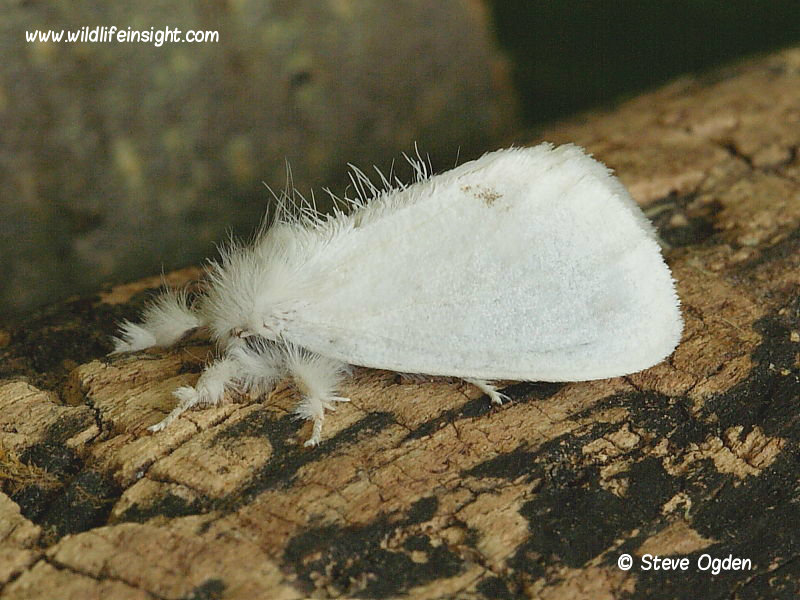 The Yellow-tail moth is found throughout much of the Uk but becoming scarcer further north and absent in Scotland.

It flies mainly in a single generation between May and August when it’s attracted to light and sometimes disturbed during the day.

They commonly occur in gardens and woodlands as well as more open areas with deciduous tree hedges.

The red, black and white caterpillars, shown below, are frequently seen during the day. 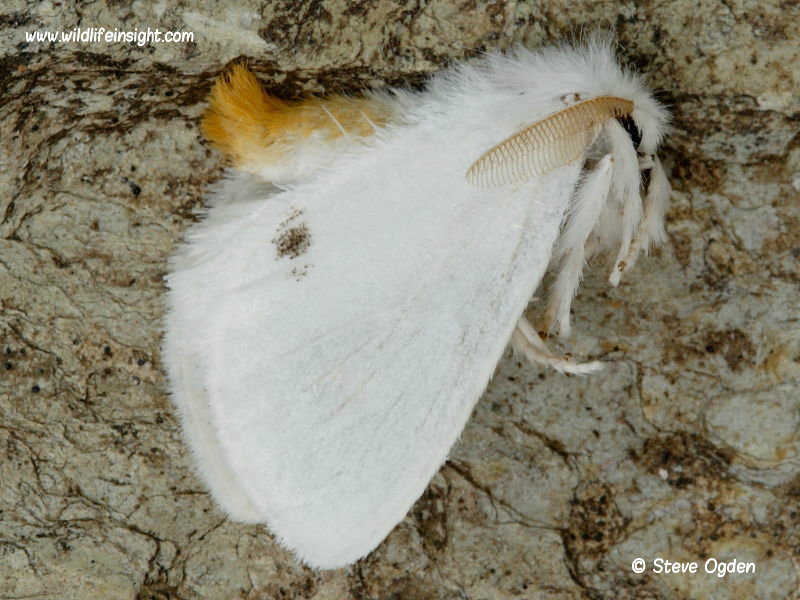 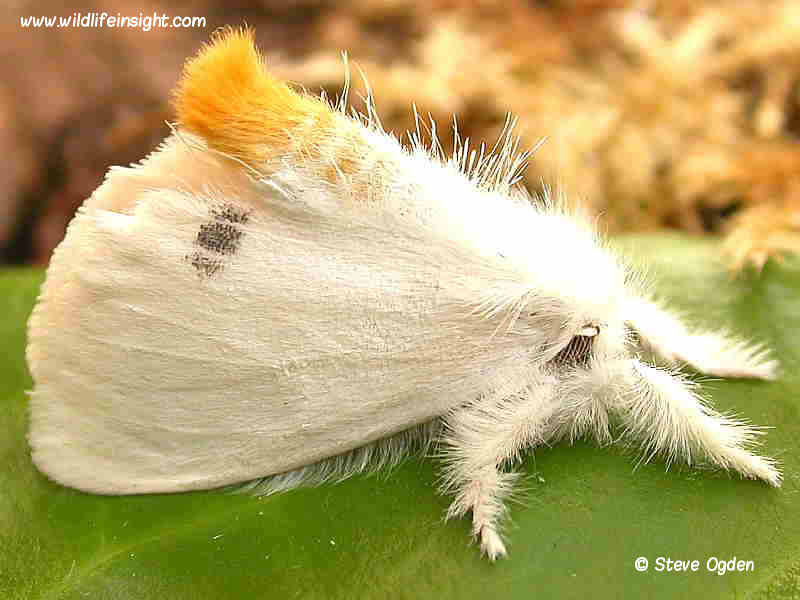 The Yellow-tail moth has a wingspan of between 35-48 mm with the male generally slightly smaller than the female.

The male has pectinate antennae (comb like) and one or two distinctive black/grey spots on the trailing edge of the forewing.

The female is white but occasionally has a faint grey mark on the trailing edge of the forewing.

When threatened both male and female feign death by lying on their side and exposing the yellow tips to their abdomen. 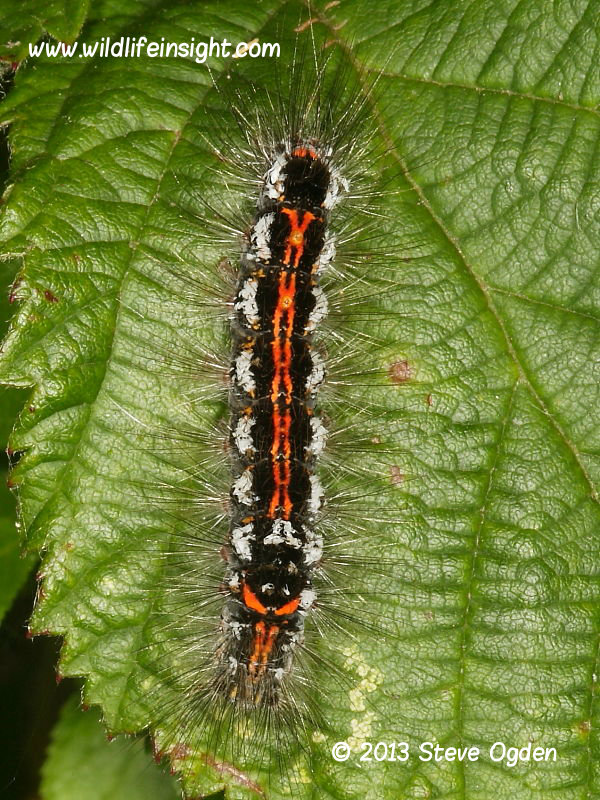 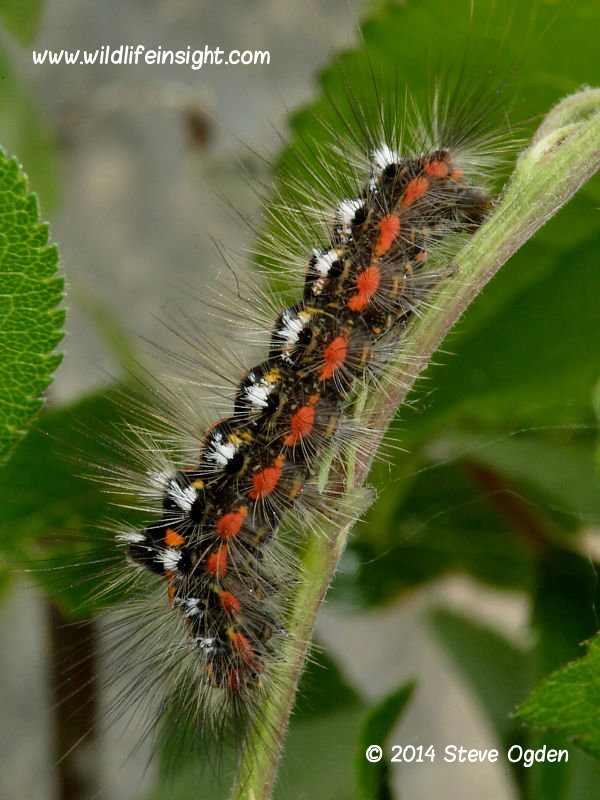 The Yellow-tail caterpillars grow up to 43 mm and feed on a variety of deciduous trees including oak, hawthorn and blackthorn.

The body is black with greyish/white hairs, a pair of intermittent red lines extending along the dorsum, a row of white blotches sub dorsally and a line of red marks in the spiracular region.

The caterpillars are sometimes confused with those of the Brown-tail caterpillar and The Knot Grass caterpillar. 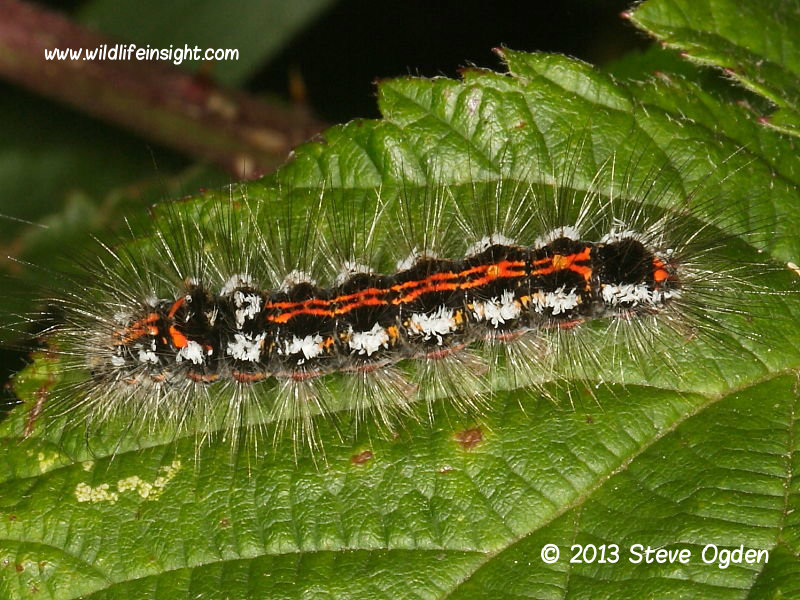 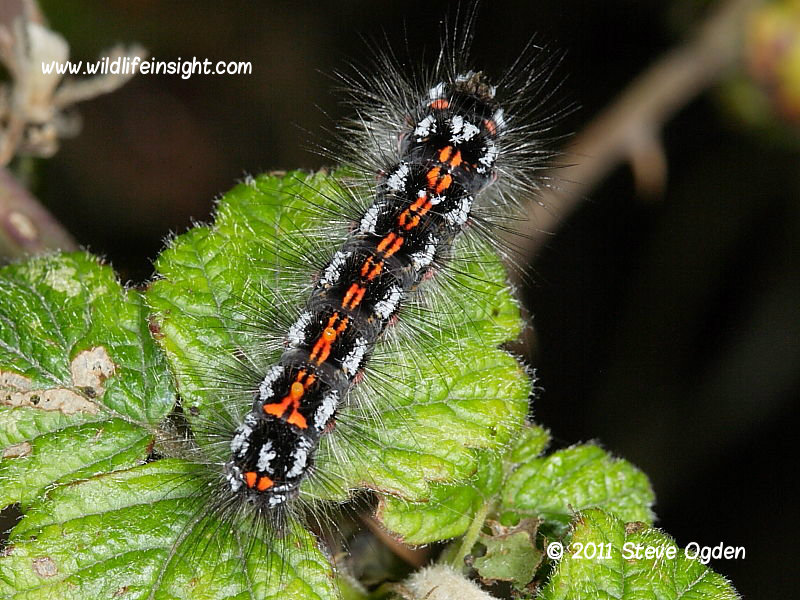 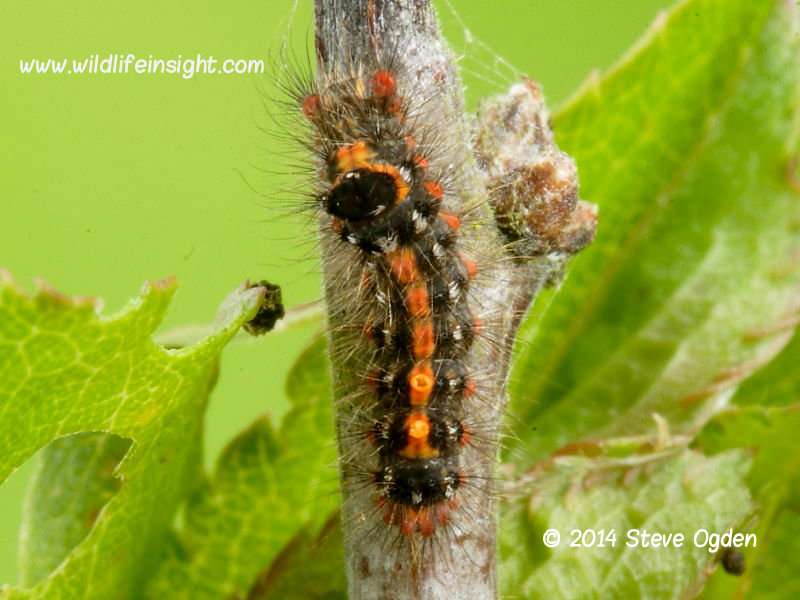 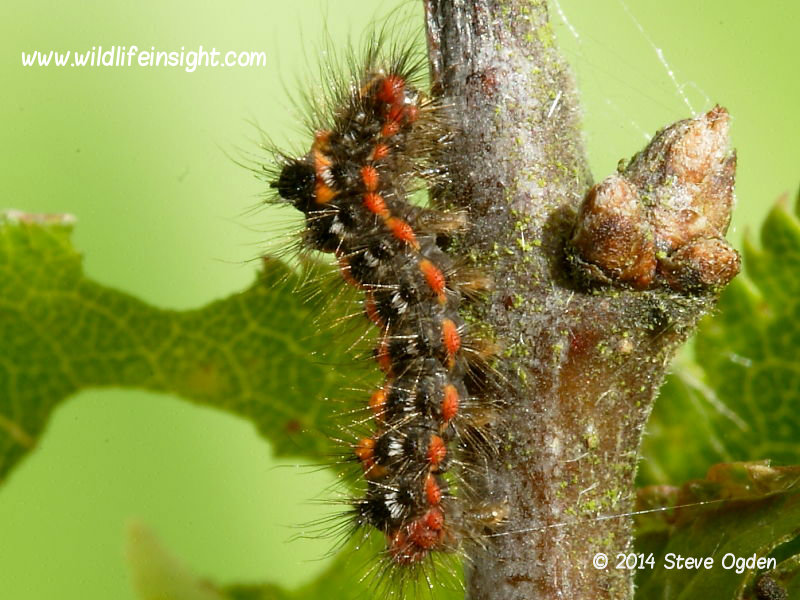 The Yellow-tail moth flies between May and August with an occasional smaller second generation later in the year.

The female lays a batch of eggs and coats them with hairs from the tip of her abdomen.

The caterpillars hatch within a few days and overwinter when still small in an individual hibernaculum before resuming feeding in the Spring.

The 7mm caterpillars shown above were recorded on hawthorn in a Cornish hedgerow at the beginning of May having over wintered.

The caterpillars pupate inside a cocoon amongst leaf litter and the larval foodplant.

The adult moth emerges from the over wintered cocoon in May. 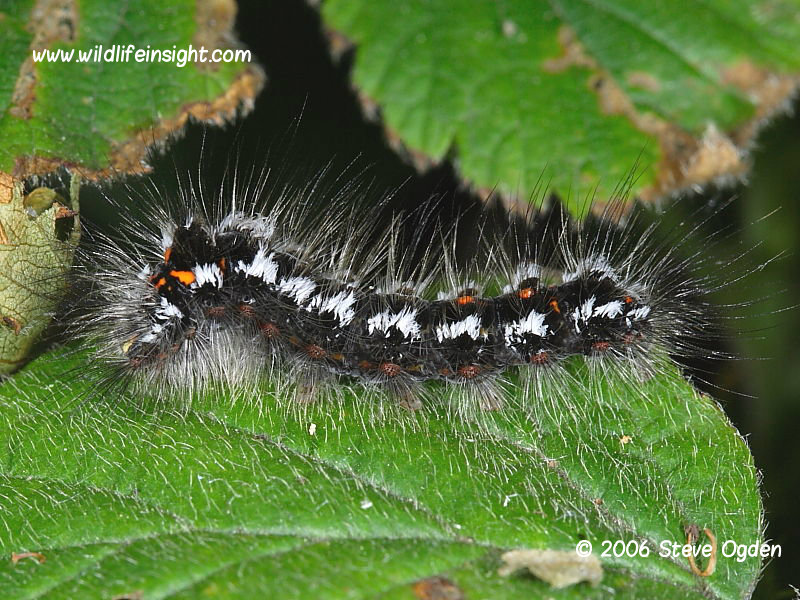 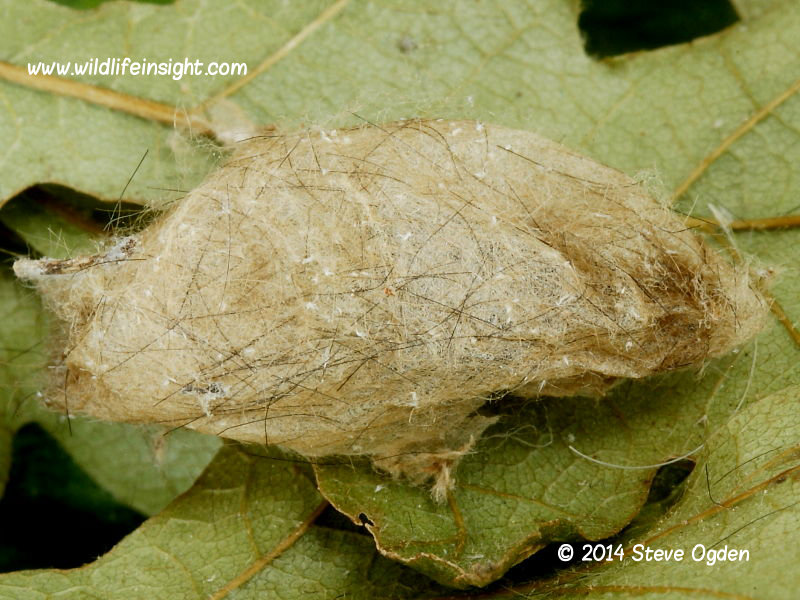 The caterpillars of the Yellow-tail moth and are very easy to rear.

They require no specific requirements other than some leaf litter in which to pupate.

The larvae can be readily found in the Spring by searching and beating.

In areas where the species is common a search of blackthorn and hawthorn hedges is often productive.

The overwintering cocoons should be stored in a cold room or outhouse.