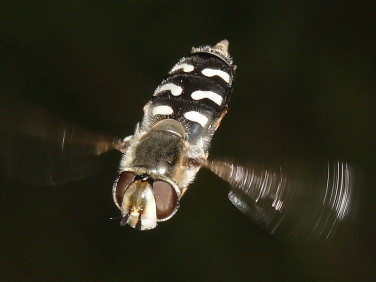 Fortunately, in this day and age with modern digital technology it’s possible to take countless out-of-focus shots without the added despair at having to pay for rolls of expensive film.

Well, I don’t like to admit it but, in my experience, taking good photographs of hoverflies in flight requires a modicum of skill, a lot of persistence and buckets of luck! 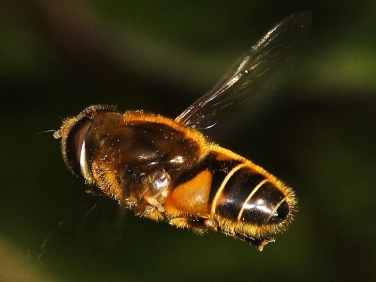 Following the posting of images of hoverflies in flight I often receive comments and emails asking how it was done and what camera equipment was used. A wildlife photography section will shortly be added to the site. In the meantime, the camera equipment I use is a twin-headed flash mounted on the end of a macro lens fitted to a full frame six year old Canon IDS MK II Digital SLR camera.

If I can get away without using flash for wildlife macro photography I will but, when faced with a fast moving insect such as a hoverfly, I find it’s the only way to guarantee a fast enough shutter speed that will freeze the subject.

Paradoxically, one of the reasons I don’t like using flash for a lot of macro photography is the black background it often creates and, yet, having such a background for a hoverfly in flight can sometimes dramatically increase the impact of an image. 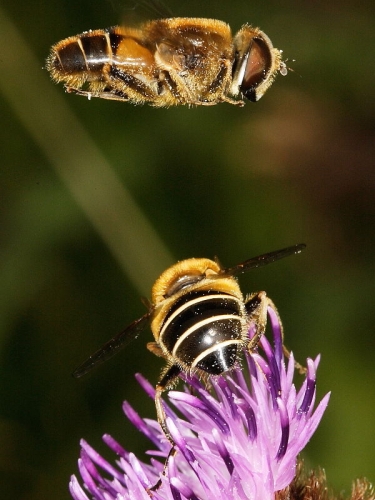 The first few shots I take are to adjust the flash output to cast the right amount of light at the anticipated focusing distance; something best done on a fixed object. And because I don’t find the automatic focus on my set up fast enough I manually focus. Sometimes, when manually focusing a macro lens, I find it is easier to actually move the camera back and forth until the subject is in focus instead of actually turning the focusing ring on the lens. It’s all about what can be done fastest.

Once the camera and flash settings are ready it’s really just down to finding the species of hoverfly you’re after and having a go. There is no doubt that with practice I’ve become a little more adept at focusing quickly and the results have become more consistent but, even so, I still find it very hit and miss.

As ever when photographing any form of wildlife I find it helps to understand the subjects behaviour. Some species of hoverfly offer a better chance of success than others because of their more prolonged and predictable hovering flight pattern. For example, the male hoverfly Eristalis nemorum will often hover just above the female for a second or two before suddenly dropping on to her to mate. This pattern of behaviour provides the briefest of opportunity to snatch a shot of him and her together in one shot. 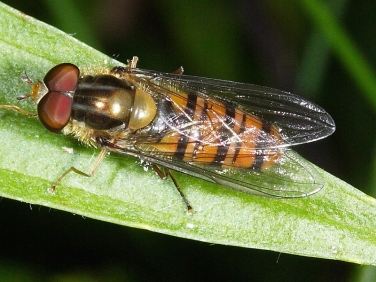 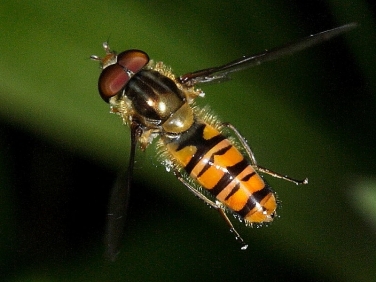 Taking a good shot of a hover in flight is not solely a bit if an ego trip but because many hoverflies settle with their wings closed, obscuring their body, any flight shots that clearly reveal the hovefly’s anatonomy can also prove useful in the identification process.

Even the normally easy to identify common resident and migrant hoverfly Episyrphus balteatus may not be instantly recognisable when settled with wings closed. This can be a particular problem when sunlight is reflecting off the wings of a hoverfly. So my recommendation is that if you are bored with photographing static wildlife and wish to experience the true meaning of frustration then have a go at capturing an image of a hoverfly in flight. But be prepared for a sudden ‘wow moment’ when you capture that shot – it’s well worth the effort.