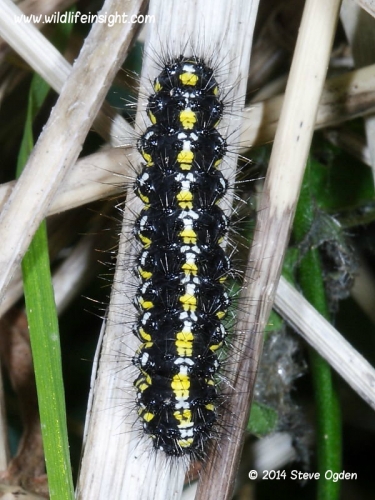 It’s always pleasing when a search for a particular species actually pays off without undue hardship !

It would be an understatement to say a return to search for their caterpillars last week was a simple quest.

No grovelling about on hands and knees for hour after hour amongst long grasses and prickly undergrowth.

We just simply walked to the spot where we’d seen the moths flying last summer and without even bending over, looked down and there they were – lots of brightly coloured Scarlet Tiger caterpillars sitting obligingly out on top of the leaves of a variety of plants – particularly nettle.

The over wintered caterpillars were on average 25mm long with still plenty of growing to do.

Why can’t all caterpillars be so accommodating!