The Wall or Wall Brown butterfly and caterpillar (Lasiommata megera)

The Wall Brown butterfly in the British Isles 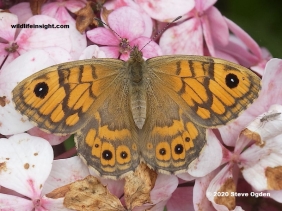 The Wall or Wall Brown is well distributed throughout most of the UK, becoming less common further north and absent from much of Scotland.

The butterfly is found in varied habitats but most numerous in open countryside and coastal areas with unimproved grasslands.

Its flight period is from the middle of April to early October during which two broods occur with a partial third in the south.

The female featured nectaring on a hydrangea in a Cornish garden in late September was likely to have been a third generation butterfly. 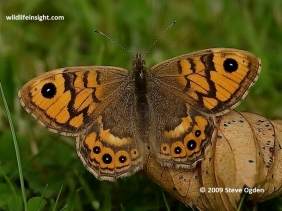 Despite being relatively common the butterfly is never seen in large numbers.

Being a sun loving species its frequently encountered when disturbed whilst basking on the dry soil of worn paths or on stone walls.

The larvae feed on broad leaved grasses and the butterflies feed on a variety of flowers.

The Wall Brown butterfly in Europe 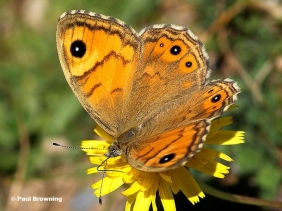 The species range extends as far south as North Africa and northwards throughout much of Europe as far as southern Scandinavia and eastwards into Turkey. 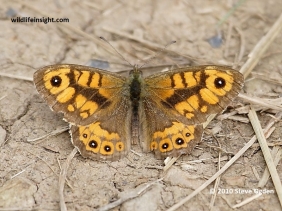 The male is slightly smaller than the female and has a prominent dark band of scent scales centrally on the forewing.

The male featured was basking on the parched ground of a Cornish coastal path.

Other butterflies are featured in the British Butterfly galleries and species pages. 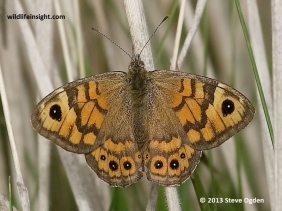 The female Wall Brown in slightly larger than the male, brighter in colour and with more rounded wingtips.

Both male and female have a single eye spot on the forewing and a row of smaller ones on the hindwing. 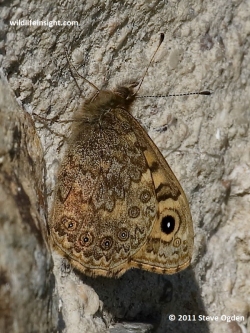 The undersides of both male and female Wall Brown butterflies are similar.

The undersides of the forewings are similarly marked to the upper sides but paler.

The underside of the hindwings are subtly marked with grey and brown shading and undulating brown lines.

An arc of small circles, normally 5 singles and a double, are towards the outer edge.

When settled with wings closed on a path or stone wall the butterflies blend in beautifully with their surroundings, making them easily overlooked until disturbed. 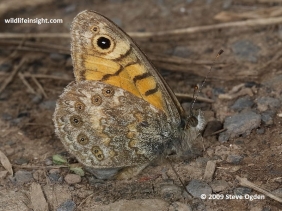 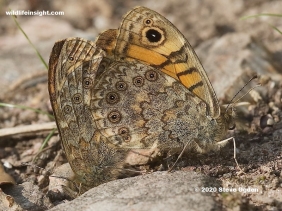 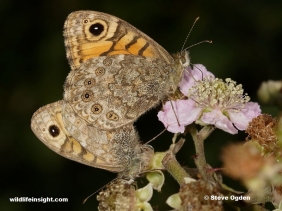 Throughout its UK range the Wall brown normally has two broods, the first from mid April to June and the second in July/August.

A partial third brood occurs during good summers in the south between late September and early October.

The butterflies nectar at a variety of flowers.

Eggs of the Wall Brown Butterfly 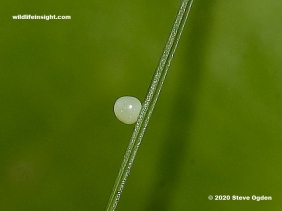 The eggs are laid singly on the blades of various grasses.

Grass growing beneath an overhang in a stone wall or in a bank hollow are sheltered places favoured by the females to lay. 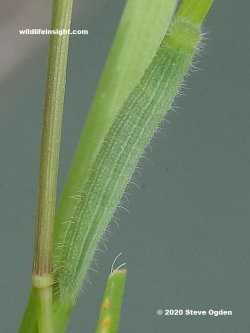 The caterpillars feed on most of the common grasses such as Couch, Cock’s-foot, Tor-grass, Wavy Hairgrass, Yorkshire-fog. and annual meadow-grass.

Later overwintering broods tend not to feed, resuming feeding in early Spring before pupating amongst grasses in April for about two weeks. 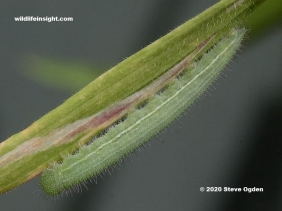 Other instars of the Wall Brown caterpillar (larva) 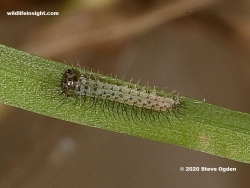 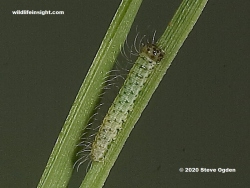 Featured are the development stages of a Wall Brown Butterfly larva reared from an egg laid at a coastal site in South West Cornwall.

Several eggs were seen being laid on the 8th August on grass growing beneath an overhang in a stone wall. 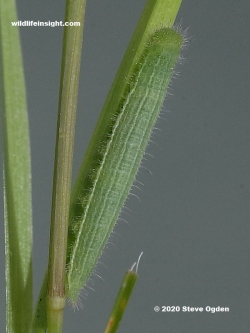 The lateness in the season suggests the eggs were laid by a second generation butterfly. The larvae developed rapidly producing a third generation of butterflies in 35 days of the eggs being laid. 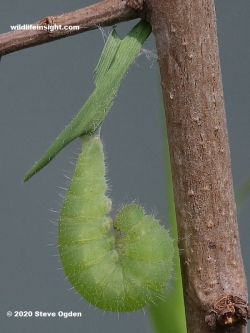 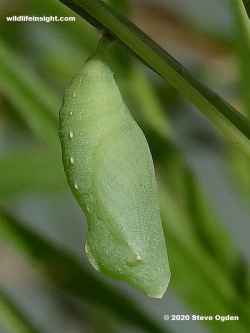 The Wall Brown chrysalis is secured by a silken pad spun beneath a stem of the foodplant or nearby plant.

The chrysalis is variable in colour, most commonly green but may be darker and on occasions almost black. 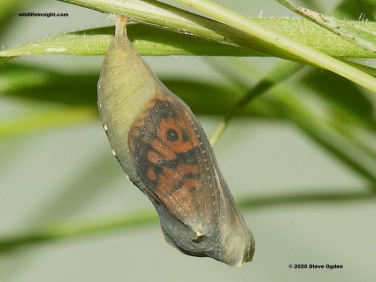 The larvae are easy to rear but those overwintering are best kept outside in a sheltered place on potted grasses with some leaf litter in which they can later spin their cocoon.