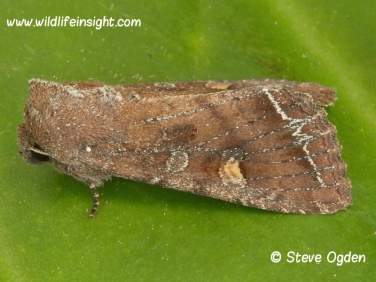 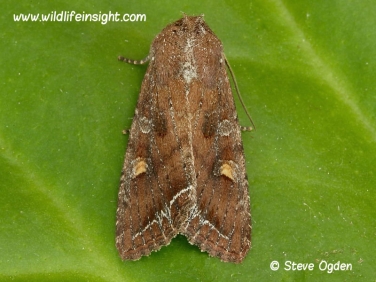 The Bright–line Brown-eye moth is a common species found throughout most of the British Isles.

It is often referred to as the Tomato moth by gardeners as its caterpillars also feed on the fruit and leaves of tomato plants as well as many other herbaceous plants.

The adult moth flies mainly in a single generation between May to July with a smaller second generation in parts of the south.

The adult moth has a wing span of about 35mm, is overall a warm lightish brown with some slightly darker specimens. The moths name refers to the two most obvious identifying features – the white line incorporating a ‘W’ which extends across the forewing close to the outer edge and the orangey blotch in the kidney mark.

Identification of the Tomato Moth caterpillar 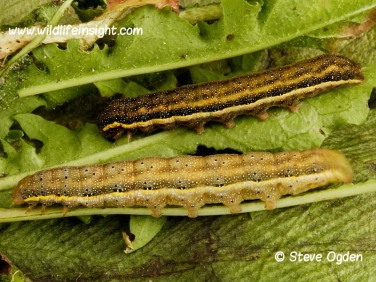 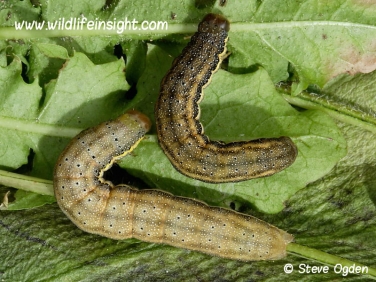 The caterpillar of the Bright-line Brown-eye reach 40mm when fully grown and are variable shades of brown.

A distinctive feature is a sprinkling of white specks and more pronounced black spots over most of the body. A side on view also reveals a broad yellowish line just beneath the spiracular line.

See illustrated guide to caterpillars for links to galleries and help with caterpillar identification.

Life cycle of the Tomato Moth 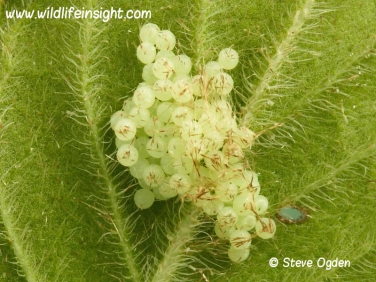 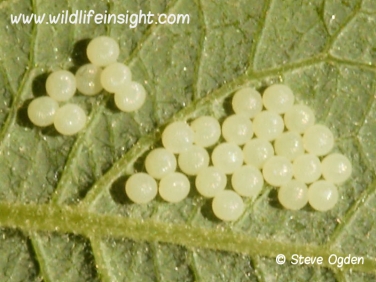 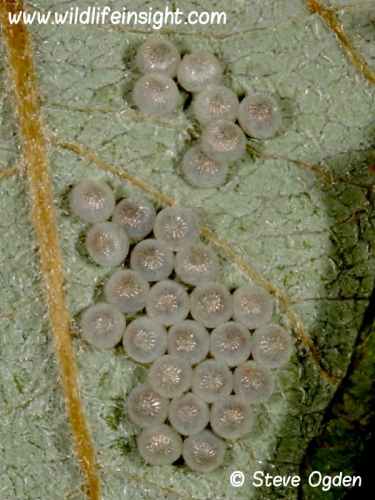 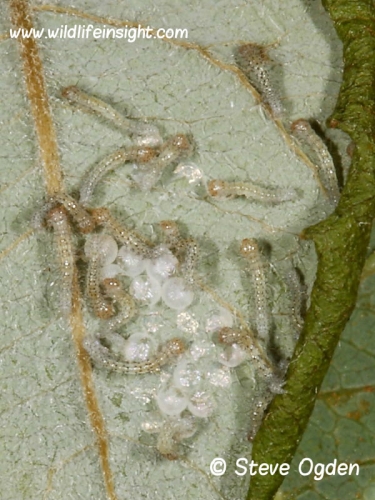 Eggs are laid at night on the underside of leaves of a variety of common, low-growing herbaceous plants such as dock, dandelion, plantain and water mint. They have also been recorded on trees such as sallows.

The batch of eggs shown above was laid on water mint beside a pond in Cornwall. The smaller batch shown were found on the underside of a sallow leaf on The Lizard peninsular, Cornwall. 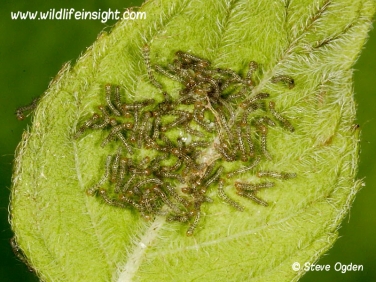 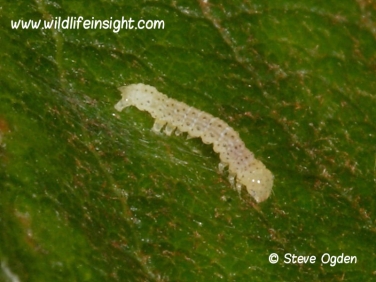 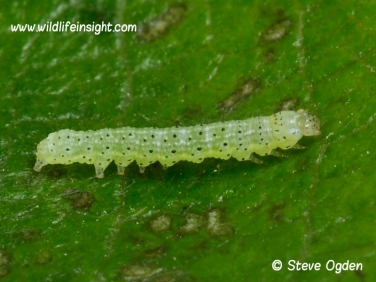 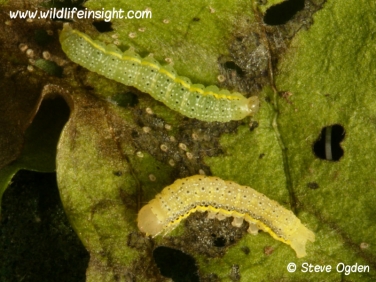 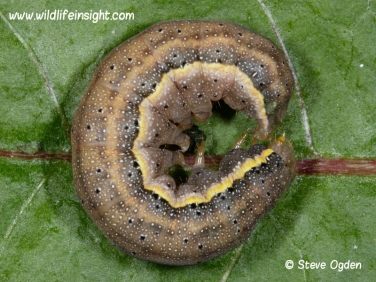 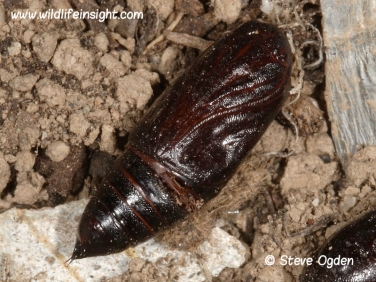 Batches in excess of 100 eggs hatch within seven days and the caterpillars are fully grown within 30 days. The larger they become the more frequently they feed at night.

Once fully grown they stop feeding and leave the food plant to pupate in the soil.

The overwintering pupae have a twin hook cremaster and are formed inside a thin protective covering of soil.

The adult moth normally emerges in May with slight variation in timing according to temperature.

Females attracted to light lay readily in captivity and the caterpillars are easy to rear. 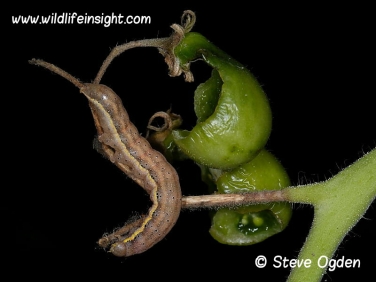 The caterpillars frequently feed on plants considered weeds by gardeners such as dandelions, dock and plantain and so cause little damage.

However, on occasions females will lay their eggs on tomato plants. The hatching caterpillars will at first feed gregariously on the leaves leaving fenestrations in the leaves. The image below shows early damage caused to tomato plant leaves by recently hatched caterpillars.

When large they will feed on ripening tomatoes, often penetrating deep into the tomato and ruining the fruit. They have also been recorded feeding on yams.

The image shows a fully grown caterpillar next to a partially eaten tomato grown inside a greenhouse. 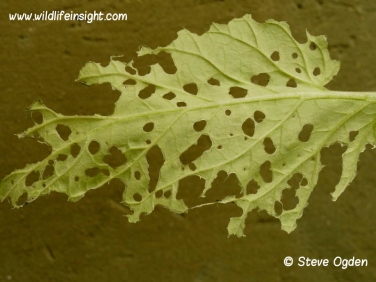 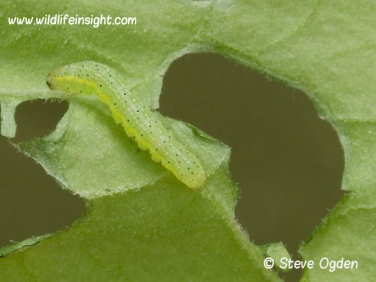 To prevent the adult moths from laying eggs on the plants some fine mesh should be placed over the greenhouse windows between May and August. Doors left open during the day to allow bees to enter should be netted off if left open at night.

If growing tomatoes outdoors then the whole plant will have be cloaked in netting.

Any clusters of eggs are usually easy to find on the underside of the leaves and can then be scrapped off.

At the first sign of fenestrations appearing in tomato leaves check the undersides for the tiny caterpillars.

The location of the feeding caterpillars is often given away by fine dark freckling of frass on the leaves directly beneath those being eaten.

Once caterpillars are found they can be picked off individually when large or flicked off into a container when small using a fine artist’s brush.

When very small and feeding gregariously they can be scooped off with a spoon.

Continual checking for leaf and fruit damage will soon reveal any caterpillars missed.

Pupa of the Bright-line Brown-eye moth

Any soil remaining in the greenhouse for the next season should be lightly sifted through for the pupa of the caterpillars. This will prevent more moths emerging the following year inside the greenhouse.

The use of insecticides and sprays to eradicate Tomato Moth caterpillars

For most small scale growing of tomato crops in greenhouse and conservatories the use of insecticide sprays are unnecessary and can kill many other beneficial insects. Keeping an eye open for the first sign of leaf damage and immediately removing the caterpillars as described above is both effective and more environmentally friendly.