Where to see dolphins, seals, Basking Sharks and seabirds in Cornwall 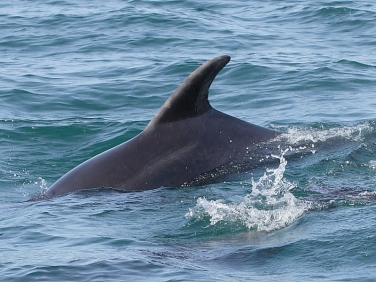 Cornwall is one of best places in the British Isles to see marine mammals, Basking Sharks and seabirds from the land and sea.

Oceanic Sunfish are not uncommon and even a few whales and Loggerhead Turtles are sighted annually.

In recent years thousands of huge Barrel jellyfish have been sighted from all around the coast and in harbours such as Newlyn and Falmouth. Please see update on Portuguese Man-of- War and Barrel jellyfish.

Although sightings come from all around the hundreds of miles of Cornish coastline there are several places that have historically produced consistently large numbers of records.

Conveniently, in South West Cornwall, visitors are never too far away from one of the top sea watching places.

Please Note – Due to an increase in disturbance to hauled out seals visitors are requested to keep their distance, keep dogs on leads and to not fly drones in the vicinity of any wildlife. 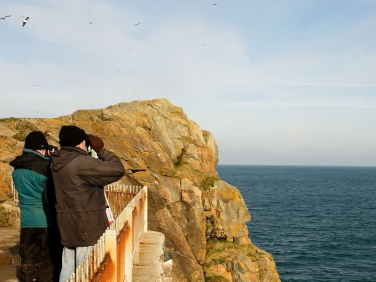 Click on the places below for more information on the best seawatching sites. 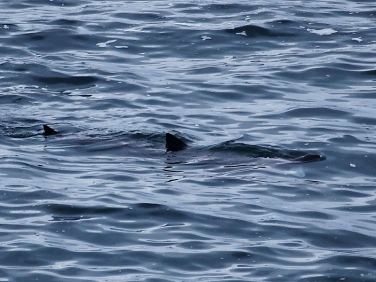 The best times of the year to see dolphins, Basking Sharks and seals in Cornwall

Please Note – Due to an increase in disturbance to hauled out seals visitors are requested to keep their distance, keep dogs on leads and to not fly drones in the vicinity of any wildlife.

Sightings can be unpredictable but, in general, seals, dolphins and porpoises can show at any time of the year.

Basking Shark first show as the plankton bloom increases in late Spring and then depart in the Autumn.

Oceanic Sunfish arrive inshore during the summer to feed on jellyfish. 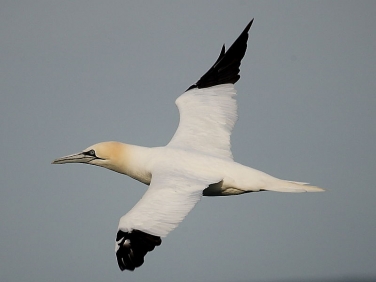 Large numbers of seabirds, including a wide variety of different species, can be seen all year round.

From April to October is the best time for numbers of passage birds such as Shearwaters and Skuas.

The best weather conditions are during strong onshore winds which drive birds that are normally far out to sea close to the coastline.

In south west Cornwall the north and south coasts are never too far apart so there is usually somewhere within reach that is worth a visit regardless of the wind direction.

In 2017 there was a large influx of Portuguese Man-of- War jellyfish into Cornish waters. Many were washed onto the beaches and left stranded in rock pools. Although this was a rare event, should anyone come across one of these colourful jellyfish the recommendation is not to touch it due its long, stinging tentacles