Distribution of the Red Sword-grass moth 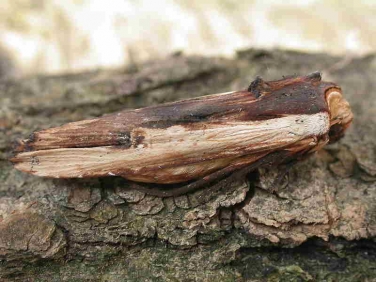 This cryptically disguised moth has a localised distribution and is found most commonly in the damp areas on the western side of the UK as far north as Scotland and the Hebrides. Less common in the south where some migration is thought to occur.

Flight period is between September and May, over-wintering in a dormant state during the colder months.

It is locally recorded in damp woodlands and moorlands although may be under-recorded because of the often exposed nature of its habitat and its early and late flight season.

Identification of the Red Sword-grass moth 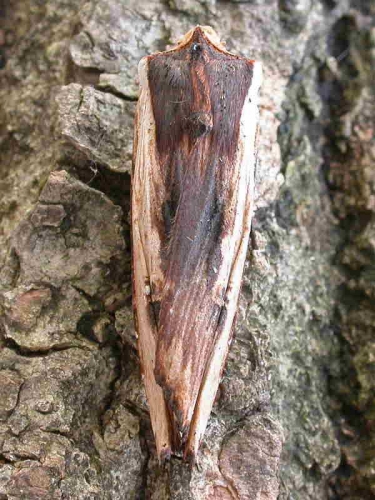 A very distinctive moth and only likely to be confused in the British Isles with the scarcer Sword-grass, Xylena exsoleta, which appears paler and less contrasting, lacking any reddish brown colouring.

It is deceptively large with a wingspan of approx 55mm and flies at night, rarely being seen unless attracted to either light or sweet smelling lures.

In the autumn it will feed on blackberries and flowering Ivy (Hedera helix), and in spring will visit sallow catkins.

When at rest it rolls its wings up tightly and its cryptic shape and colouring make it extremely difficult to see when at rest. 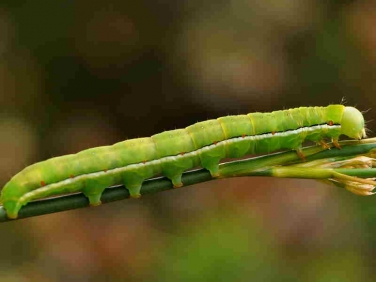 The caterpillars reach up to 60mm in length and although predominately green can be shades of brown.

The orange spiracles are outlined in black and both true legs and pro legs have orangey/yellow traces. A broad white spiracle line is highlighted above by a fine black line.

The caterpillars hatch in May and are fully grown by the end of June when they are occasionally found sitting on reeds, grasses and low vegetation prior to pupating in the soil.

This image is a green form of Red Sword-grass caterpillar recorded and photographed by Helen Sly in the RSPB Arne reserve in Dorset on 16 June 2014.

The caterpillars feed on a variety of low growing herbaceous plants often associated with damp moorlands such as bog myrtle, heather, sedges and docks.

To supplement information gained through personal studies the following books have been consulted: