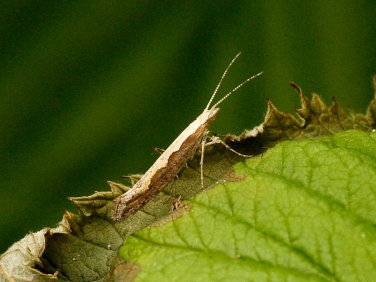 Diamond-back Moths are found throughout much of America, Europe, Africa, Eurasia, Australia and New Zealand.

They have strong dispersal tendencies with huge numbers annually migrating to countries where the cold winters prevent their permanent residency.

In many parts of the world they are also referred to as Cabbage Moths due to the damage caused to cabbages and other crucifers by their caterpillars. This can lead to confusion with the other similarly named caterpillar pests The Cabbage Moth and The Cabbage Looper.

Distribution of the Diamond-back Moth 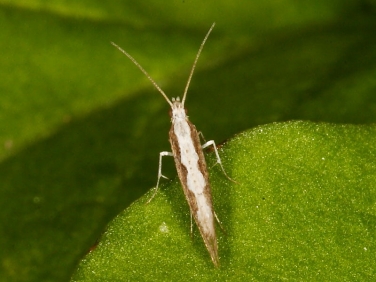 In the British Isles it is one of the commonest migrant moths with annual influxes often in the millions.

Although commonest in southern counties their range extends to the most northerly Scottish Islands.

Migrants mainly arrive between the spring and autumn from Europe and North Africa but can be recorded in any month. Normally it is unable to survive the cold winters but with recent mild winters small numbers may now be over-wintering in parts of warmer southern counties.

Identification of the Diamond-back Moth 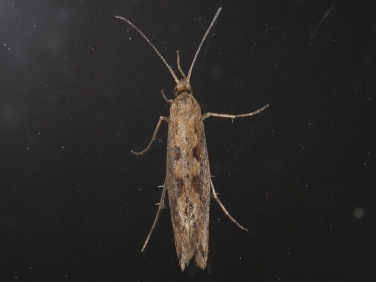 This tiny brown moth, about 7mm in length, is normally best identified by the pale diamond pattern on its back.

However, the colour is variable ranging from dark brown to pale and on some specimens the diamond back pattern is almost indeterminable from the overall wing colour.

It seems likely that the temperature of the country of origin may have a bearing on the degree of colour contrast.

Life-cycle of the Diamond-back Moth 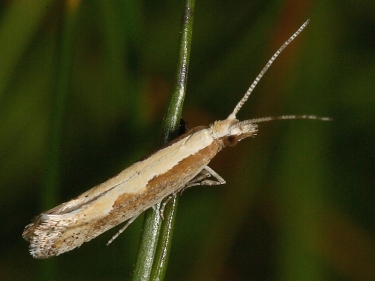 The Diamond-back Moth is multi brooded and depending on weather may start to lay eggs as early as March until September in the British Isles.

The tiny pale oval eggs, less than 0.5mm long, are laid both singularly and loosely spread in small groups on either side of the leaves of the caterpillar food plant.

Females will lay in excess of one hundred eggs over ten days with them normally hatching within 7 days depending on temperature.

The caterpillars have four instars, changing skins in slight silk webs on the underside of leaves, and are fully grown within 30 days. 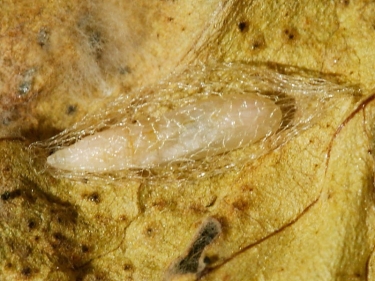 The pale/yellow pupae are about 7mm in length and formed inside a slight silk web often on the underside of the leaves.

The adult moths emerge within 14 days depending on temperature.

The life expectancy of an adult Diamond-back Moth is thought to be between 14–21 days.

Both male and females are attracted to light and are often disturbed from low-lying plants during the day.

Identification of the caterpillar of the Diamond-back Moth 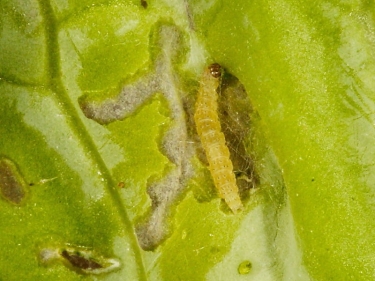 The caterpillars are almost transparent at first with darker heads that turn greener as the caterpillar grows.

The tiny caterpillars are small enough on first hatching to feed between the epidermis of leaves leaving dark blotches and mines.

In their second instar they are a pale greeny yellow with protruding forked rear claspers and feed on the leaf surface. 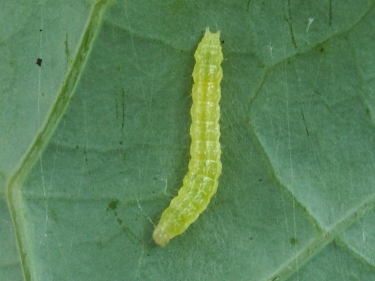 An often quoted key identification feature of the Diamond-back Moth caterpillar is that it wriggles frantically backwards and drops on a silk thread when feeling threatened. This may be true but this behaviour is also shared by many of the thousands of other micro moth larvae. 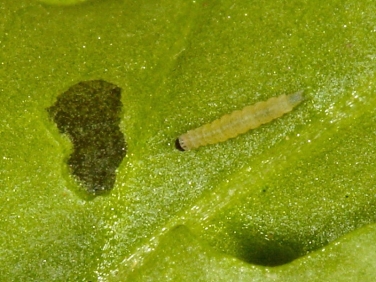 The caterpillars of the Diamond-back Moth feed on a wide range of wild and cultivated crucifers.

The caterpillars cause considerable damage to many vegetables.

Feeding signs consist of mines and fenestrations in the leaves made by recently hatched caterpillars and small holes created by later instars. 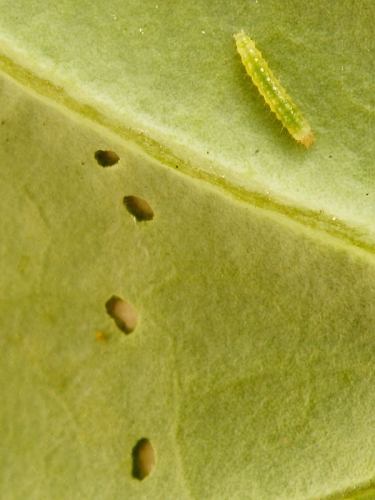 Females will often lay freely on caterpillar food plants in captivity. Eggs can also be found in the wild by close inspection of food plant leaves on which singles or small clusters are often laid close to the leaf stem.

Caterpillars are best found by searching for feeding signs on the food plant leaves.

The caterpillars pupate in a slight silk web on the food plant.

If kept inside in warm temperatures continual broods can be reared.