The Dark Green Fritillary is one of the worlds most widespread Fritillary butterflies with a range extending throughout Europe, into northern Scandinavia, as far south as Morocco and eastwards into Asia, China and Japan.

In the British Isles, Dark Green Fritillary butterflies are well distributed with the largest populations found in western coastal areas.

In South West Cornwall the coastal dunes systems on the north coast have some of the highest populations in Cornwall with fewer sightings inland.

The Dark Green Fritillary flies in a single generation from late May to the end of August.

The butterfly is one of the strongest flying fritillaries and males may often be seen flying in strong winds in search of the more sedentary females.

In south west Cornwall they can often be found nectaring on thistles, teasels, knapweeds, wild privet and red valerian amongst coastal dune systems.

The Dark Green Fritillary is one of the largest species of European Fritillary having a wingspan of c55 mm, with females generally larger than males.

The upperside of both fore and hindwings are orange-brown with black markings.

Females are a paler orange with the outer marginal spots often contrastingly so, particularly those nearest the wing tip which can appear almost white.

Undersides of the hindwings are green with large silver spots and a marginal row of smaller, silver markings.

The tips of the antennae are orange.

Other similar sized fritillary butterflies found in the UK are the Silver-washed Fritillary and the much scarcer High Brown Fritillary.

The caterpillar of the Dark Green Fritillary butterfly grows to a length of c38 mm and is black with a row of 8 conspicuous red spots down the side.

The larval foodplants are species of violet with Common Dog Violet, Viola riviniana, the most common caterpillar hostplant. 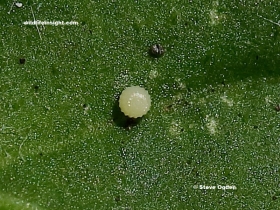 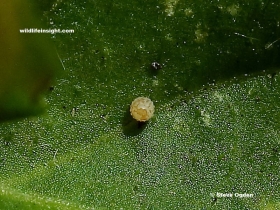 Eggs are laid singly on the leaves and stems of the larval foodplant. The females will often select violets partially hidden by vegetation, crawling down the stems of surrounding plants and disappearing from sight to lay.

The eggs are a pale yellow when freshly laid, becoming streaked with brown markings after a few days.

hibernating at the base of the foodplant.

Feeding commences in early spring when the larva becomes active in sunshine.

In second and third instars, the caterpillars are grey with white stripes and pale orange spots down the side.

The caterpillar stage lasts about 10 months with most fully grown by late May.

The distinctively curved chrysalis is suspended inside a tent like structure formed by leaves drawn together with silk low down amongst grass stems and leaf litter.

The butterfly emerges within 3-4 weeks dependent on temperature.