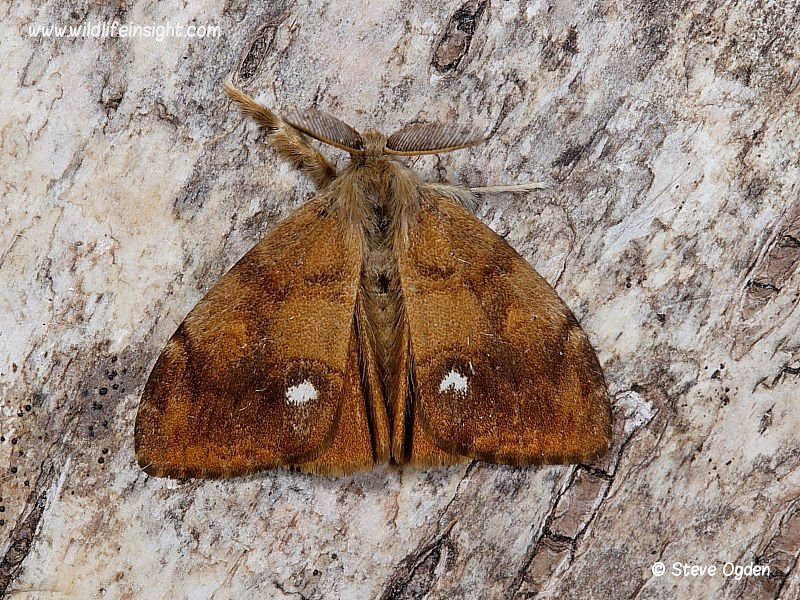 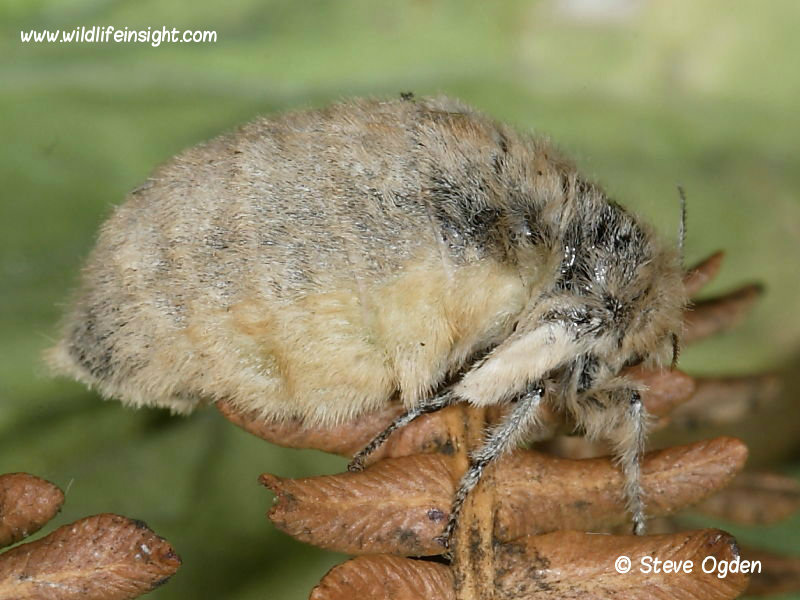 The Vapourer moth is a common species with a fascinating life cycle.

It’s found in a wide range of habitats including open woodlands, moorland, valleys and urban gardens throughout most of the British Isles ranging from northern Scotland to the extreme south west of Cornwall.

The Vapourer is also found throughout much of Europe and in North America where it is known as the Rusty Tussock Moth.

In the British Isles it flies mostly in a protracted single generation between May and October. However, the long flight period and variable peaks and troughs in numbers suggest that second generations in the southern half of England may not be uncommon.

The males are attracted to light in small numbers but are most frequently seen flying in afternoon sunshine.

For most people the Vapourer moth is best known for its spectacular caterpillars which are commonly found feeding on a wide variety of plants, shrubs and trees in gardens and the countryside. 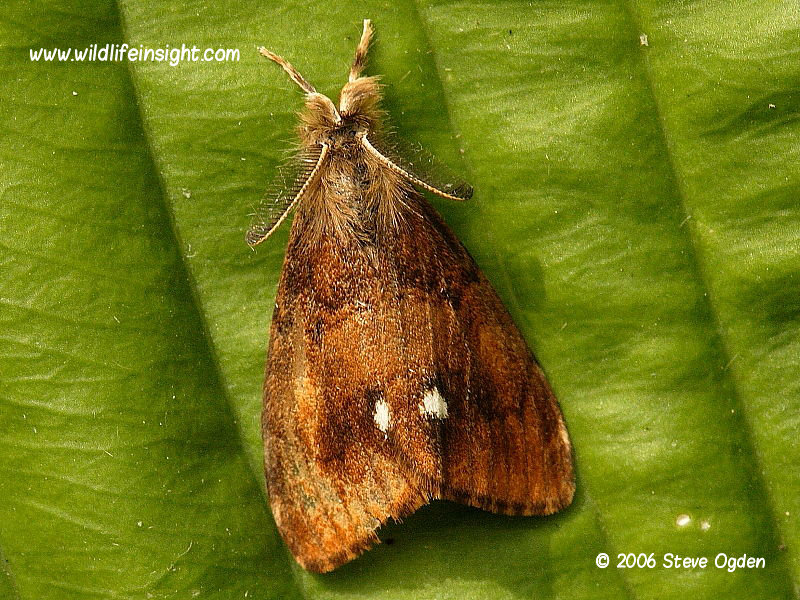 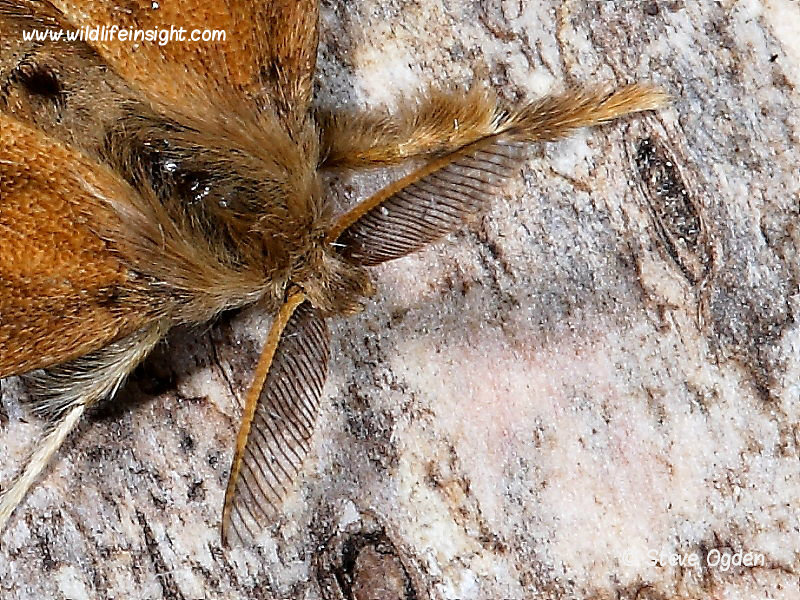 The male Vapourer has a forewing of between 25-30mm and is most frequently seen flying in sunshine when it can appear a rich orange brown.

It has a weak, fluttering flight that can be mistaken for a small butterfly.

Despite being diurnal the males are recorded sufficiently often at light traps to suggest they may also be partially active at night.

Overall it is a dull chestnut brown with a white spot towards the outer edge of the forewing. At rest it may either take on a flat triangular posture or retract its wings into a tighter scroll.

The males pectinate antennae are used to detect pheromones given off by the females. 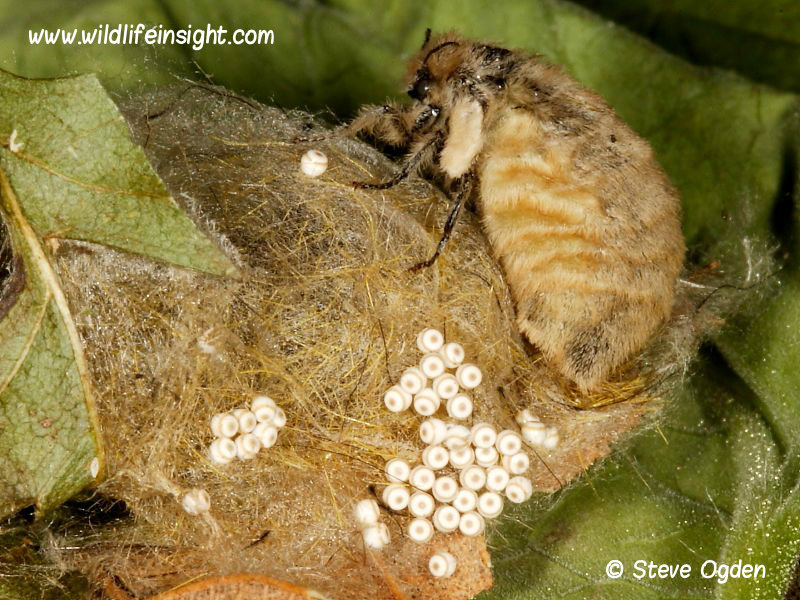 The flightless female is between 16-18mm long with vestigial wings.

Having no size or weight limitations associated with flight her large rounded abdomen can contain hundreds of eggs.

She remains on her cocoon and attracts males by giving off pheromones.

Following fertilisation she lays a large batch of eggs on the side of her cocoon and adjoining leaves.

Life Cycle of the Vapourer Moth 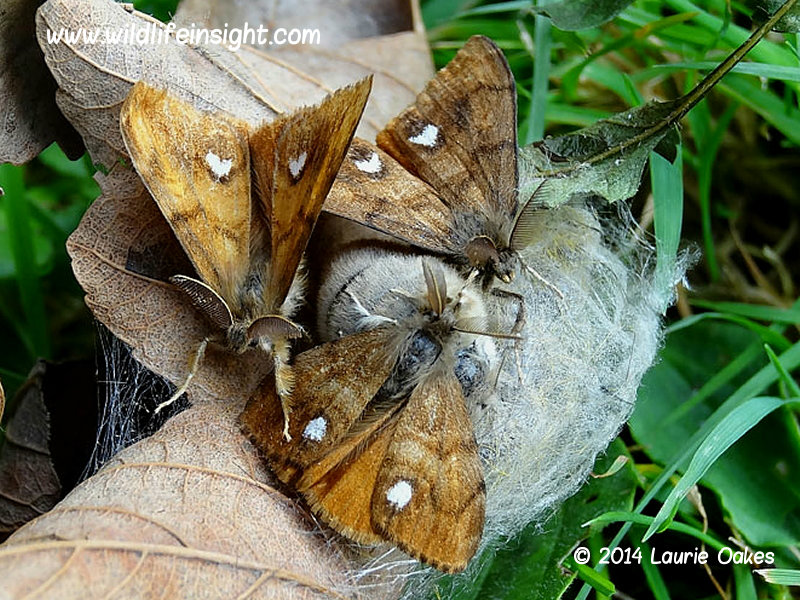 Females that have already laid a fertilised batch of eggs have been observed attracting males several days later, although it is uncertain whether this ever results in a second batch of fertilised eggs. 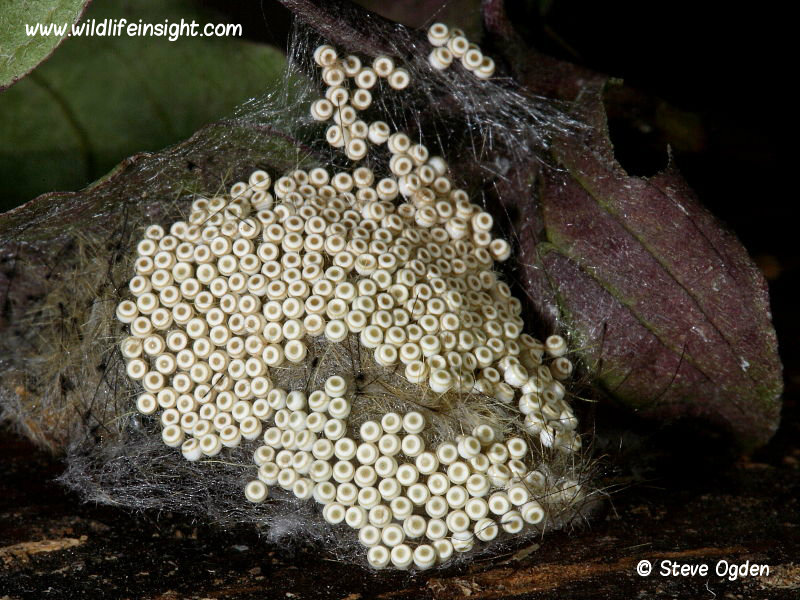 The eggs of the more normal single generation broods over winter before starting to hatch in May.

Unusually for most moth species eggs from a single batch do not all hatch within a few days, instead periodic hatching may occur over several weeks.

In captive rearing the time span between the first and last egg hatching during the Cornish study was 8 weeks.

Other life cycles of moths and butterflies can be seen in the species pages. 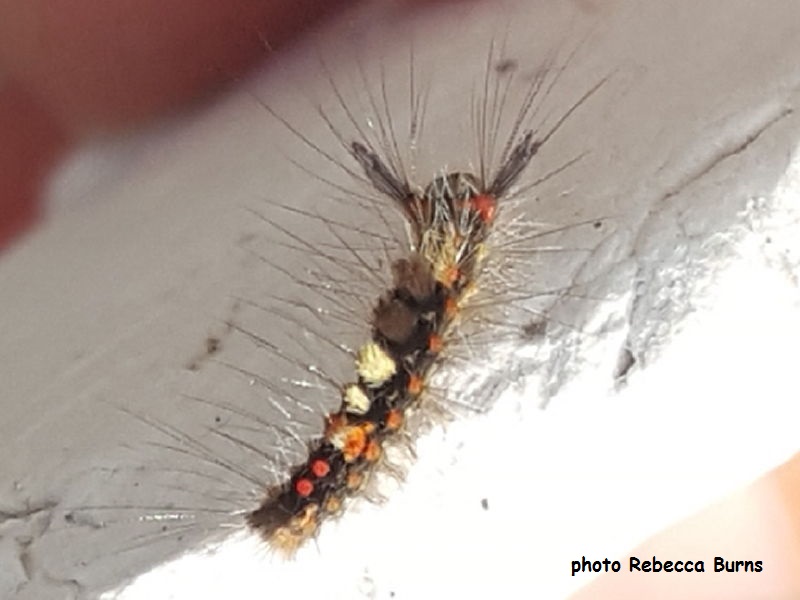 Rebecca Barns recorded 10 mm Vapourer caterpillars on her walnut tree in her garden in North Somerset in early June 2018.

One shown left was reared inside resulting in a female emerging from the pupa at the beginning of July.

When placed outside on the walnut tree she immediately attracted males and laid a batch of eggs.

The laid eggs remained on the tree for several days before Rebecca brought them inside out of the hot sun. Instead of the eggs overwintering they began hatching on the 11th July to produce a second generation. 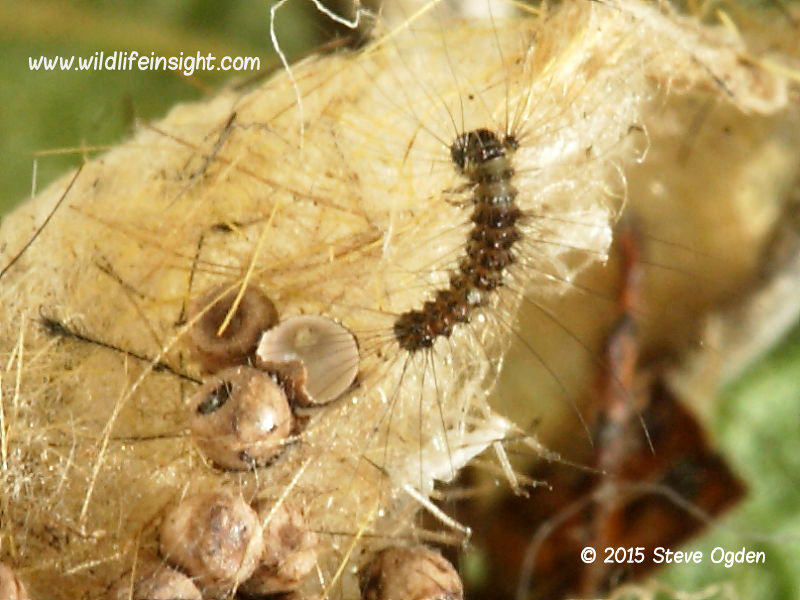 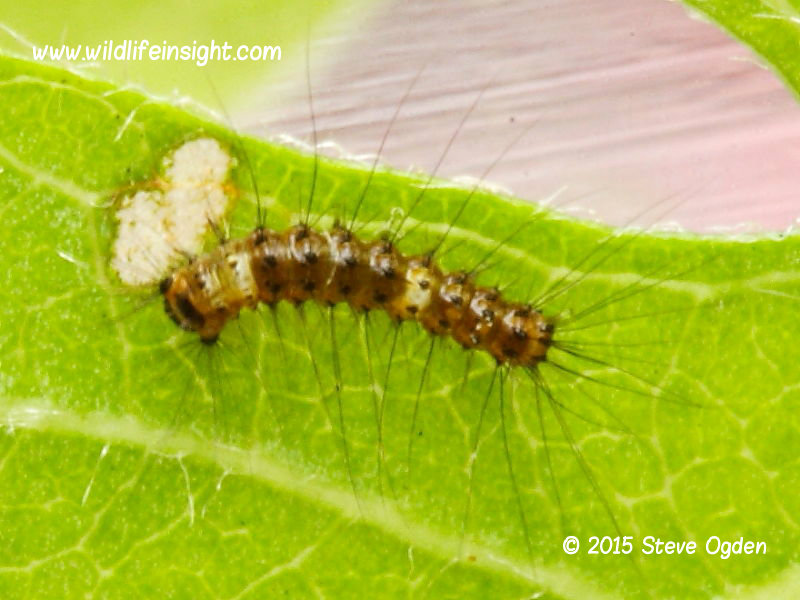 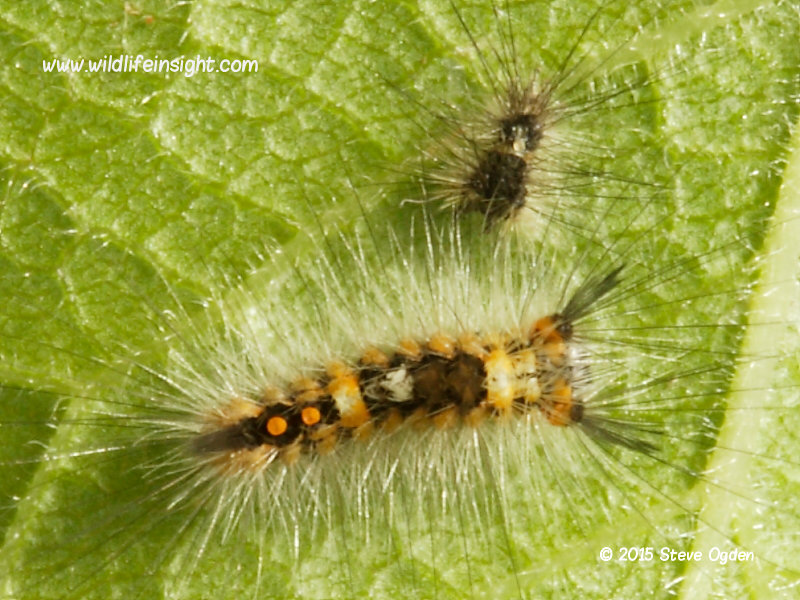 The hatching caterpillars feed on their egg before seeking out the leaves of nearby food plants.

Dispersal has also been recorded by the caterpillars being blown on silk threads.

In captivity as part of the Cornish study the first caterpillars were fully grown and pupated within 37-44 days.

Pupation takes place in a cocoon spun to either the food plant or on other stable structures such as tree trunks, walls of buildings or fence posts. 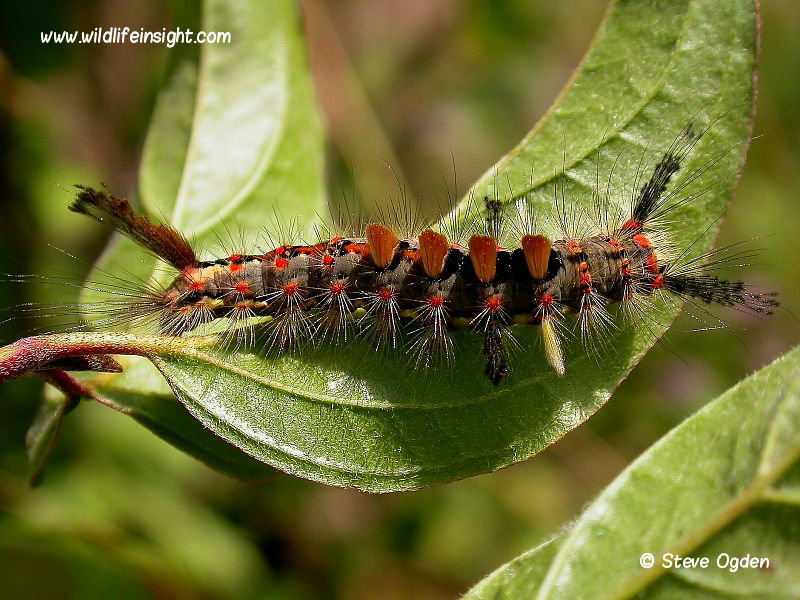 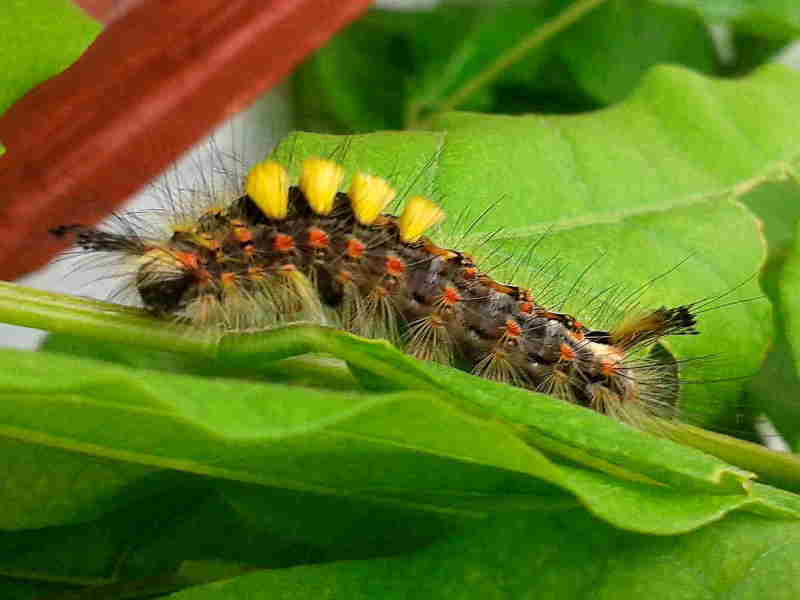 The spectacularly colourful, fully grown Vapourer Moth caterpillar is one of the most instantly recognizable caterpillar in the British Isles.

It’s also one of the most commonly sighted caterpillars in gardens where it can sometimes become so numerous to be considered a pest.

One of its most distinctive features are the dorsal tufts on the fourth to seventh segment which can be white, brown or yellow.

The ground colour is grey/dark blue with red pinacula from which sprout clusters of light/grey hair.

Thanks to Martin Frankham for use of the image showing a yellow tufted form above right. 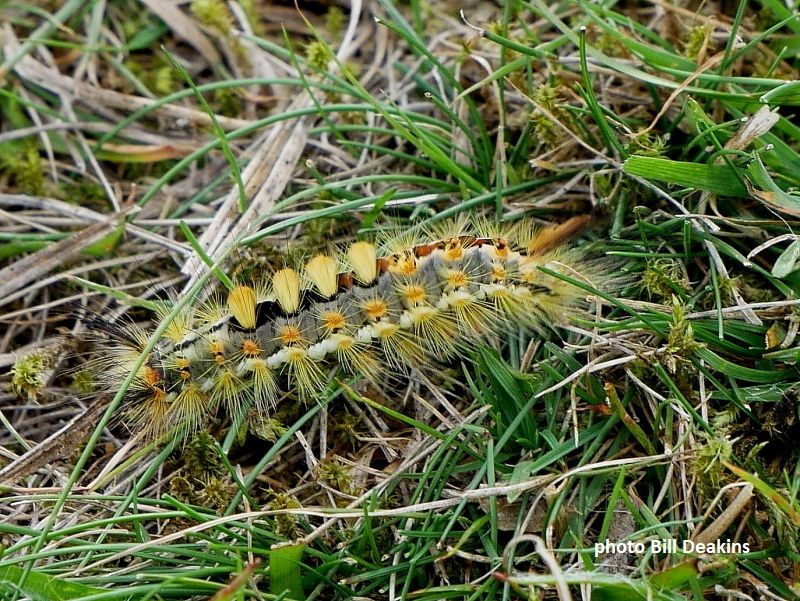 In west Cornwall there is a ‘yellow form’ which occurs on moorlands and in valleys. This has orange/yellow pinacula with yellow hairs which combine to give an overall much yellower appearance than those found in other parts of the Uk.

Interestingly, not only was it similar to those found in Cornwall but it was also recorded in similar moorland habitat and at the same time of year as those in Cornwall. 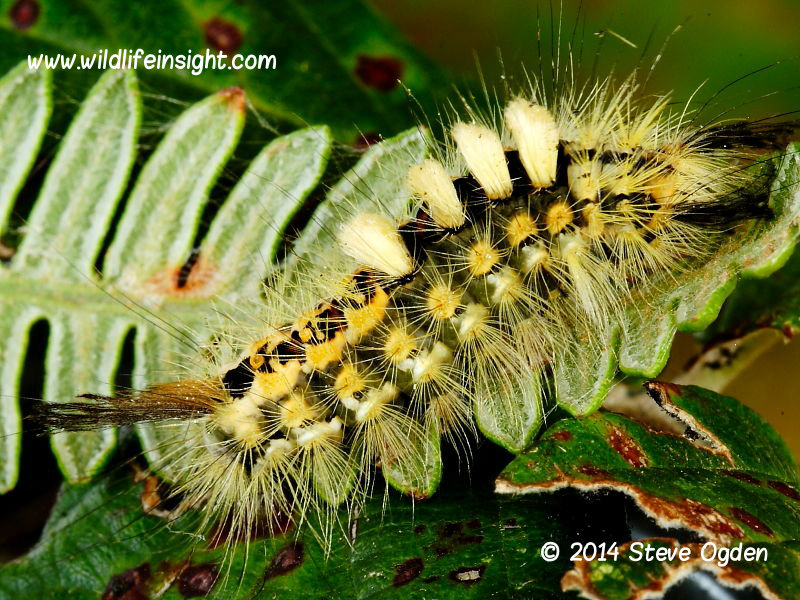 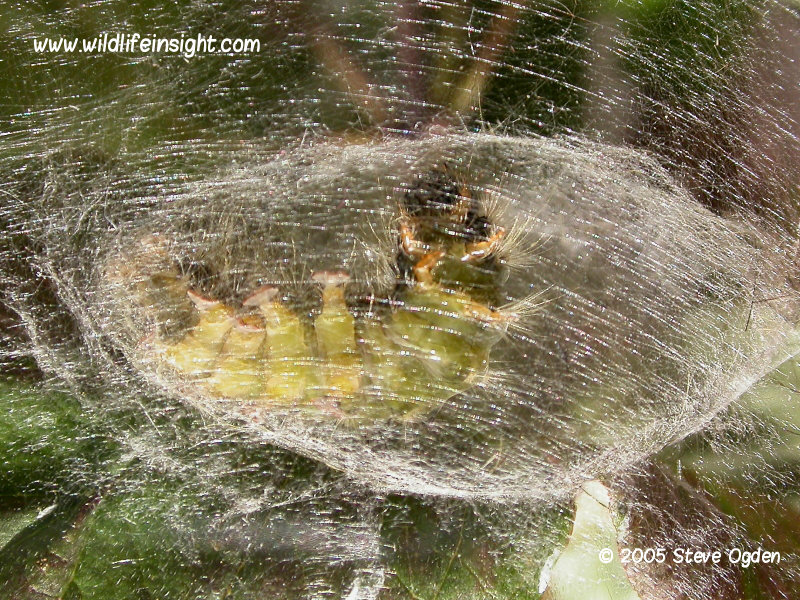 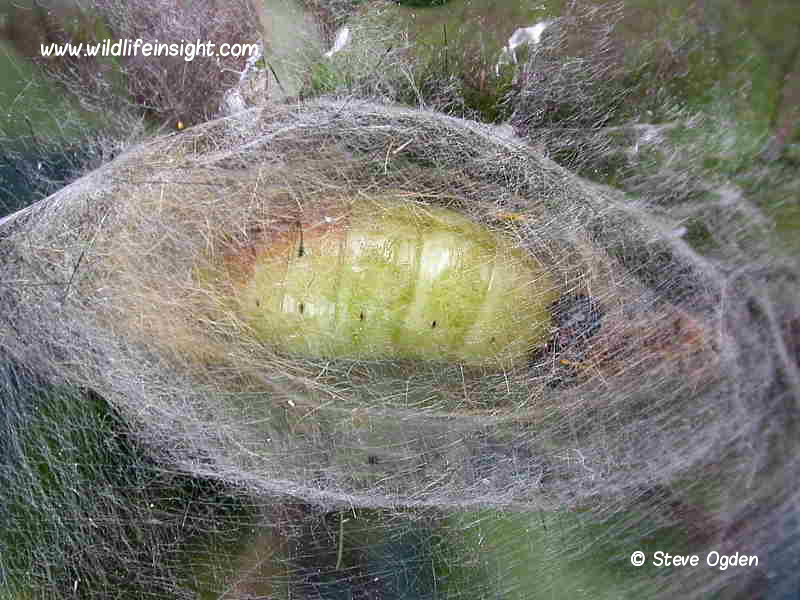 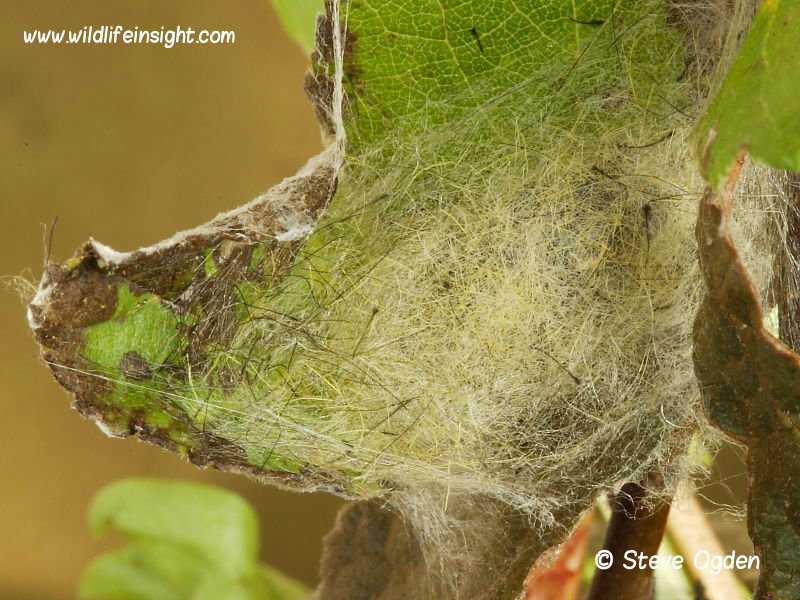 Foodplants of the Vapourer Moth caterpillar

The caterpillars feed on a wide range of deciduous trees such as Blackthorn, Hawthorn, apple and Oak as well as many shrubs.

In gardens they are frequently reported early in the year on Wisteria climbing up the sides of houses as well as many other shrubs such as Roses and Blueberry.

In Cornwall it’s suggested that ling may prove to be an important larval foodplant.

The caterpillars are very easy to rear and can be collected by sweeping. Late instar caterpillars found wandering prior to pupating are often parasitised.

Finding the eggs can be a laborious exercise and the simplest way to see the whole life cycle is to collect caterpillars and rear them through hoping a female will emerge.

She can then be taken outside on a sunny afternoon into an area known to have a population of Vapourer Moths to attract a male. Once mated she will readily lay eggs.

In the majority of cases the Vapourer moth causes little damage to shrubs and trees other than slight defoliation. However, in some urban areas and in gardens they can occasionally become so numerous they become a pest, causing severe defoliation of shrubs and specimen trees – although, most trees will fully recover the following year.