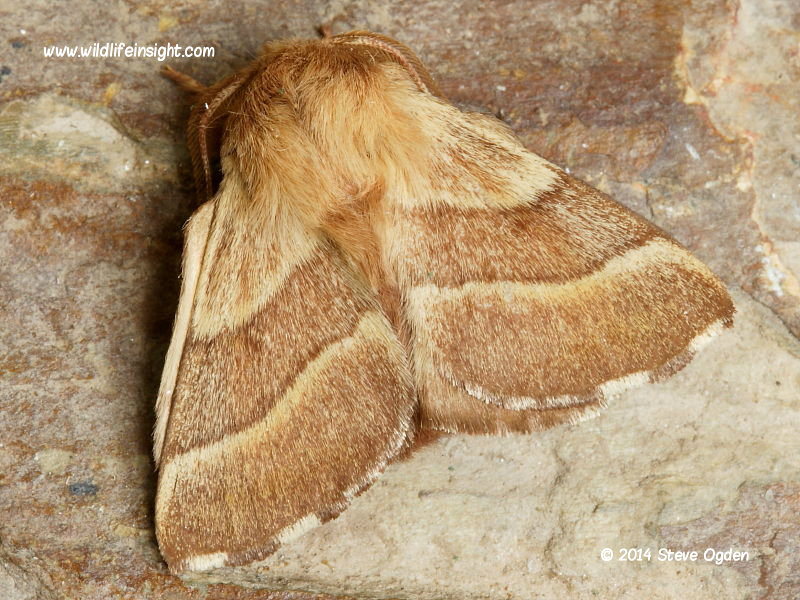 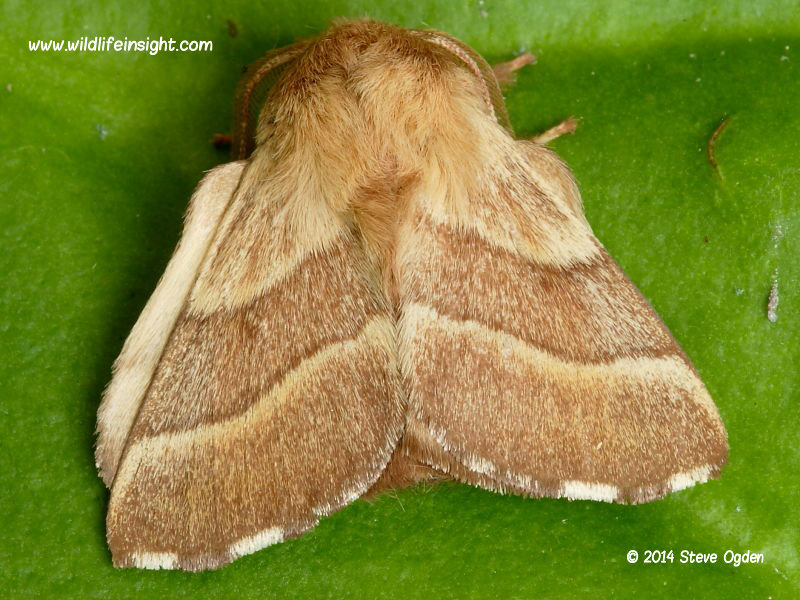 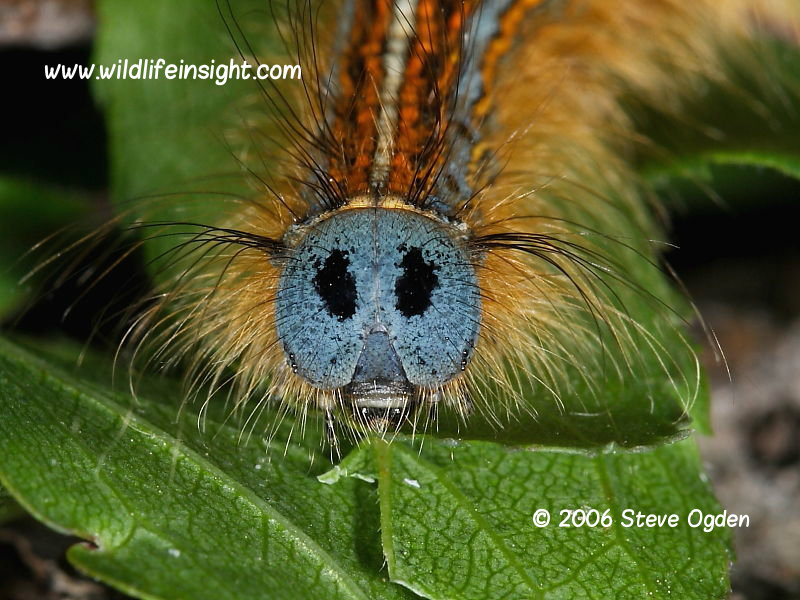 The Lackey Moth is a common species in the southern half of England roughly from below a line drawn from the Wash to the River Severn estuary and along the south and west coasts of Wales.

They inhabit open and wooded countryside with a variety of deciduous trees.

In south west Cornwall the species is frequently found in coastal regions where the silk webs of the Lackey caterpillars are often seen in low lying blackthorn and hawthorn hedges.

Latest sightings from Cornwall and other around the world

Both male and female Lackey moths have yellowy/orange forewings which can vary in shade and crossed by two darker lines.

The larger female has a wingspan of over 30 mm and the smaller male Lackey a wing span of about 25 mm.

The male lackey has feathered antennae. 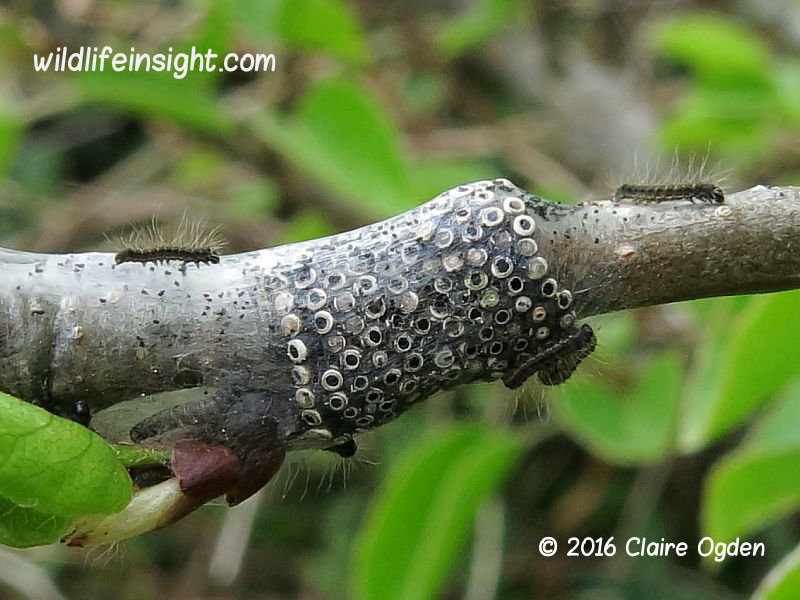 The adult moths fly in a single generation from late June to end of August and are attracted to light.

The females lay a ‘band’ of eggs around twigs of the larval food plant and over winter before hatching in early April.

The caterpillars live gregariously in a silk spun web and grow rapidly.

Other help with caterpillar identification 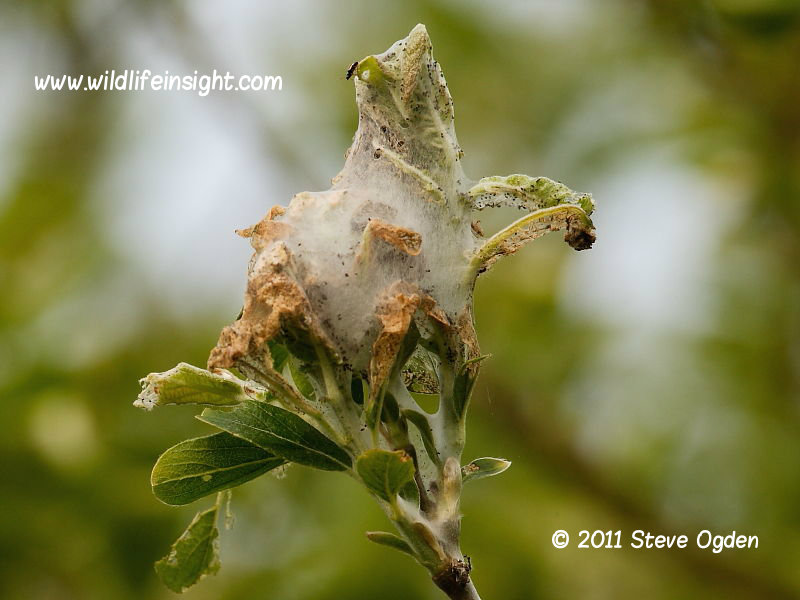 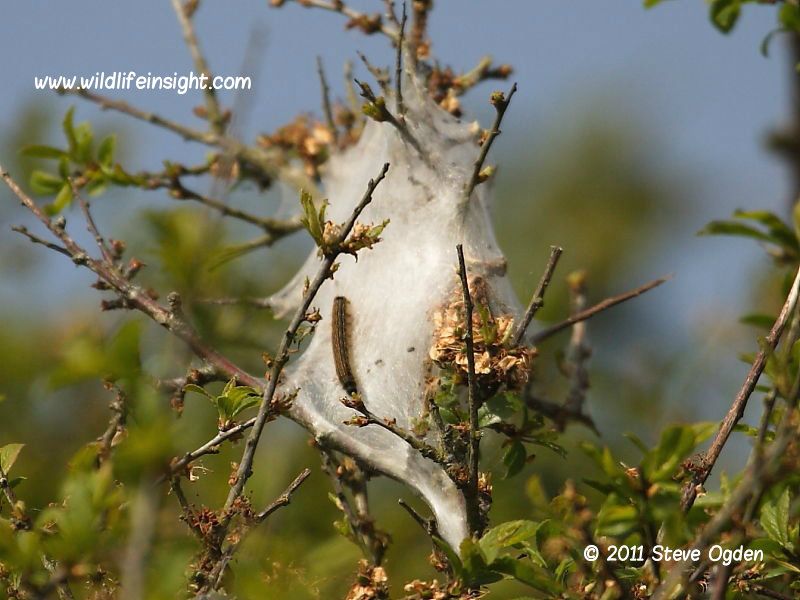 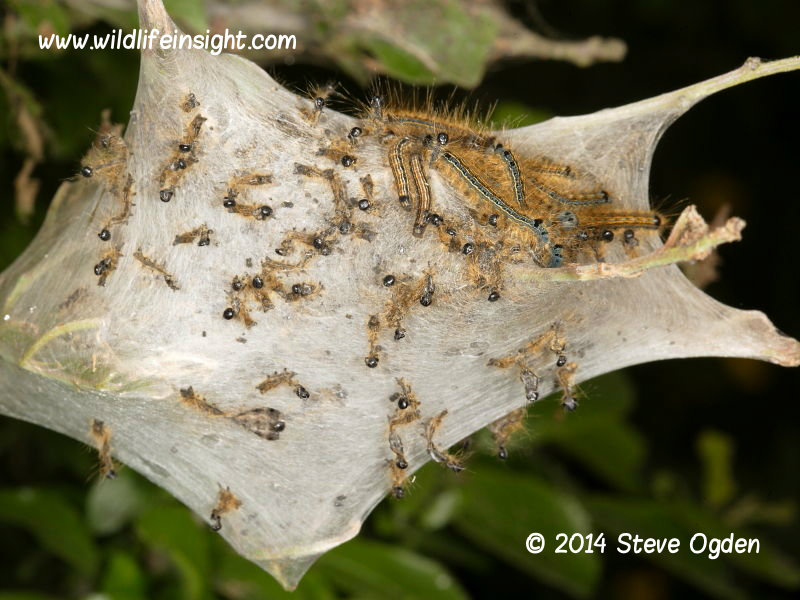 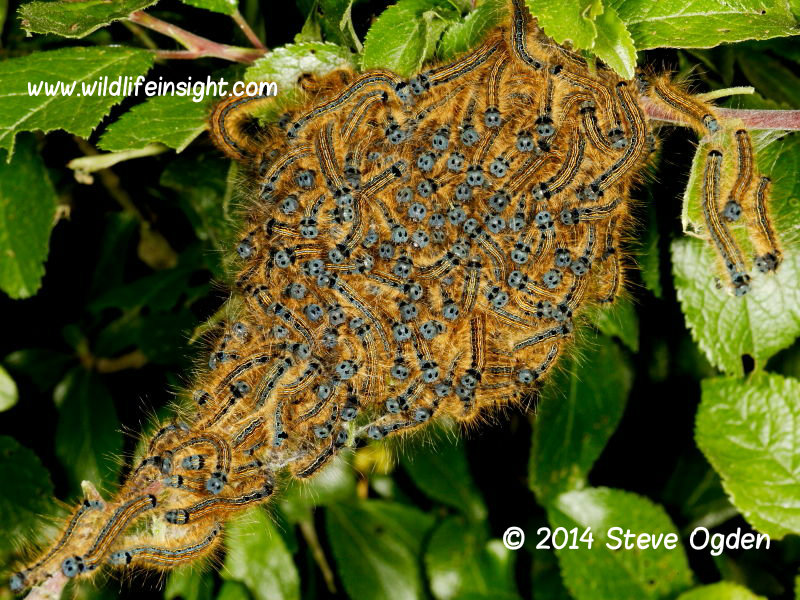 The Lackey caterpillar and webs

The webs of Lackey caterpillars are a common site amongst many low growing deciduous trees such as blackthorn, hawthorn and apple.

Over a hundred caterpillars may be seen in a single web and if undisturbed may be seen sitting on the outside during the day.

Even when recently emerged the caterpillars are distinctively marked having a range of blue, orange and pale stripes and long brown hairs.

The caterpillars grow rapidly reaching a length of 55mm by June. 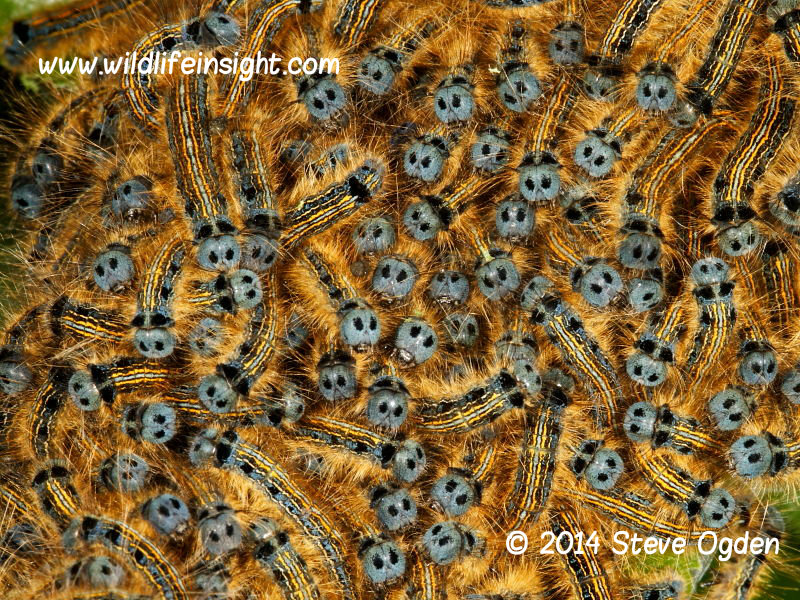 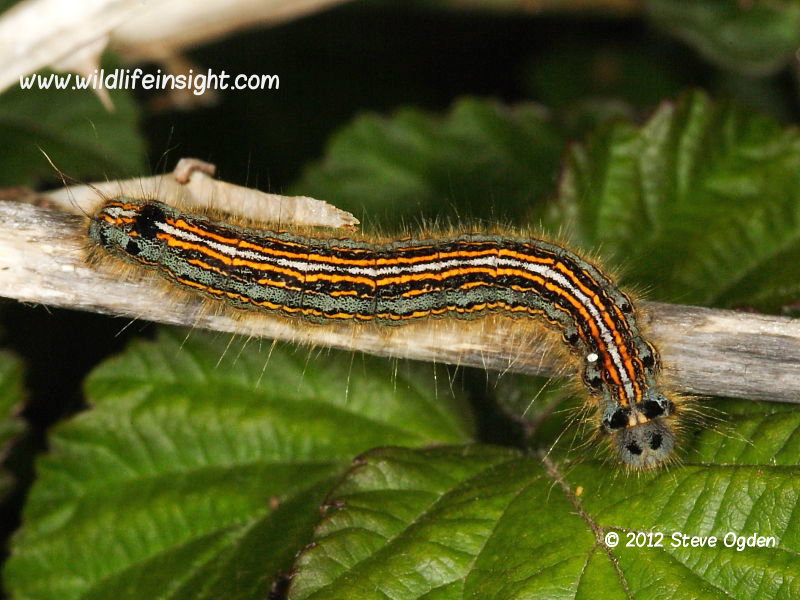 When fully grown they disperse to find a suitable place low down amongst plants to spin a cocoon and pupate.

The adult moths emerge within a month. 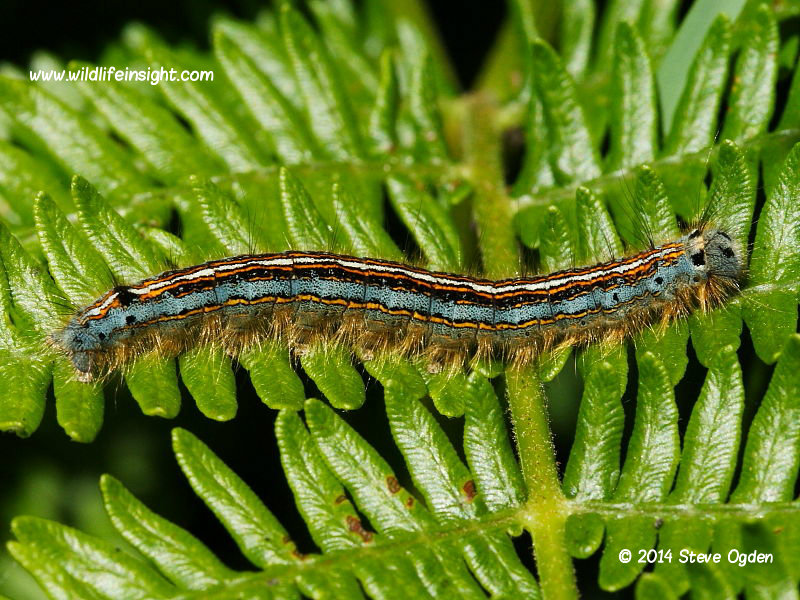 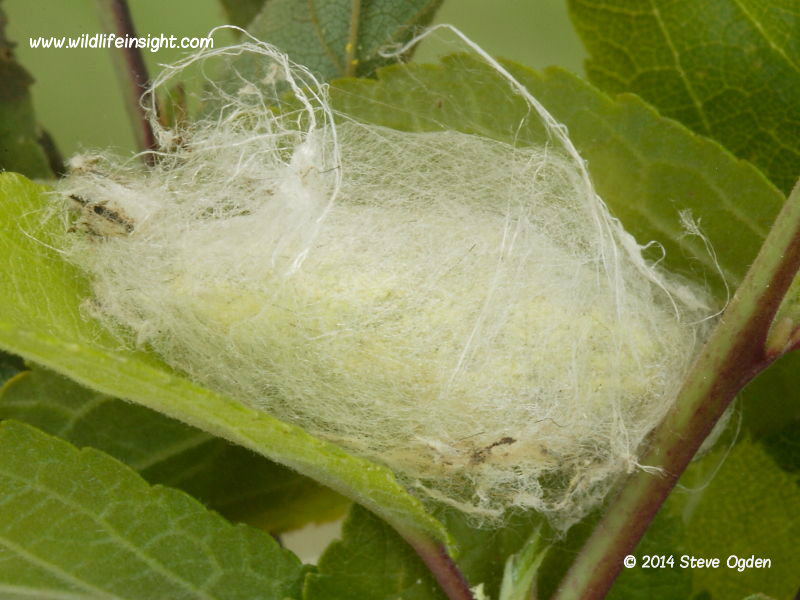