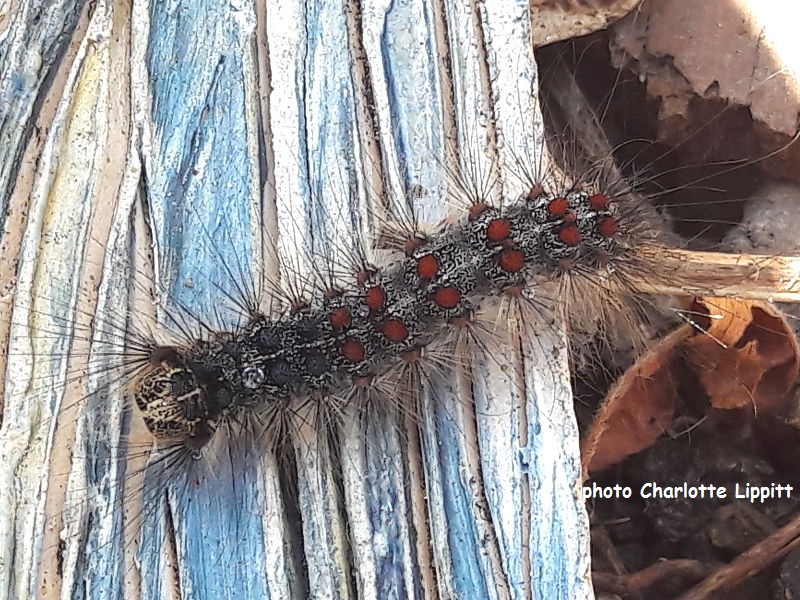 The Gypsy Moth, Lymantria dispar, is also known as the North American Gypsy Moth and the European Gypsy Moth.

The species is best known for the damage the caterpillars do to deciduous forests in many different parts of the world.

In the US it is a particular pest of trees in eastern states.

Warning – avoiding direct skin contact with the caterpillars is advised as the hairs may cause allergic skin reactions. 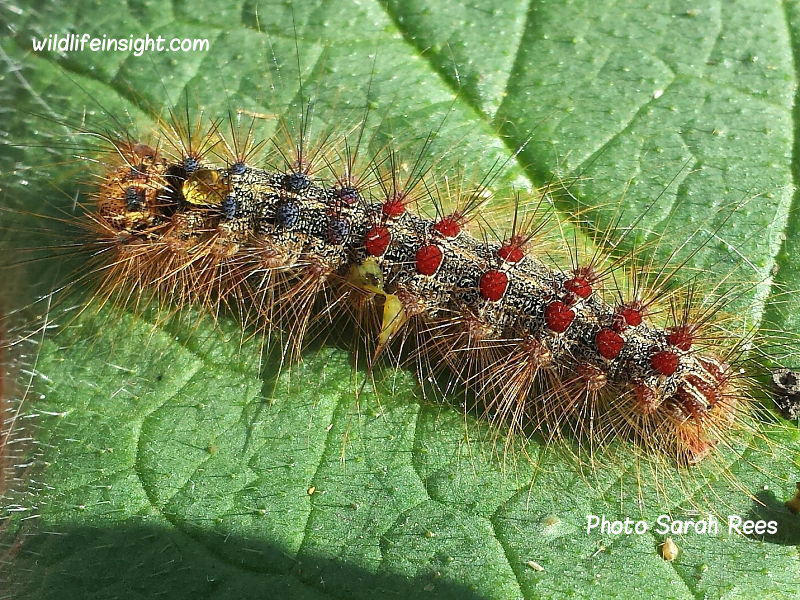 In the British Isles the Gypsy Moth became extinct over 100 years ago but was accidentally reintroduced into parts of London and the south east sometime around the turn of the century.

It soon become established in the London area and parts of the south east and attempts to eradicate it in recent years have proved unsuccessful.

Furthermore, sightings of the caterpillars now appear to be on the increase in these areas.

2017 update – sightings of Gypsy Moth caterpillars once more appear to be on the increase. Records from as far west as Wiltshire also suggest the species is extending its range. 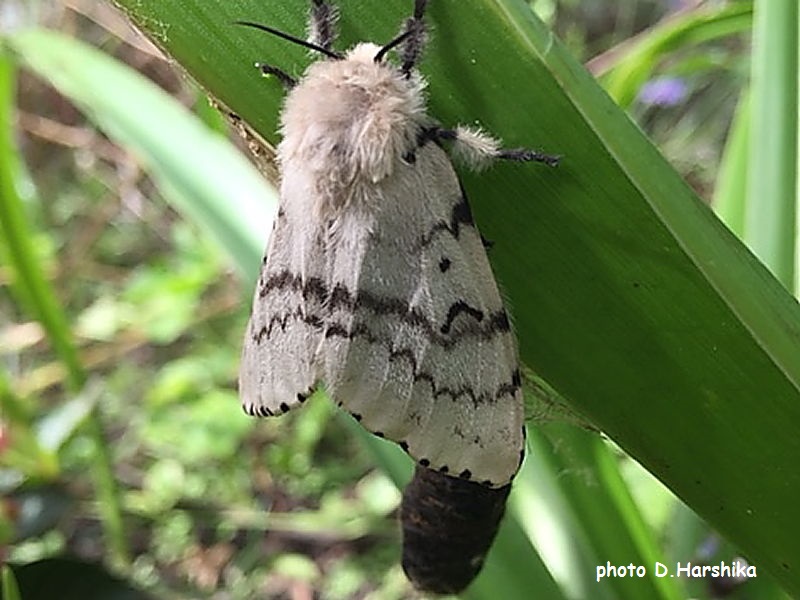 The male Gypsy moth is a scarce but regular migrant from Continental Europe to the south eastern regions of the UK.

However, the females are poor flyers and the English Channel appears to act as a barrier to their natural northward range expansion.

The female Gypsy moth is larger and whiter than the male with contrasting dark, cross lines on the forewing.

The female shown left was recorded emerging from a pupa in a Surrey garden by D. Harshika. 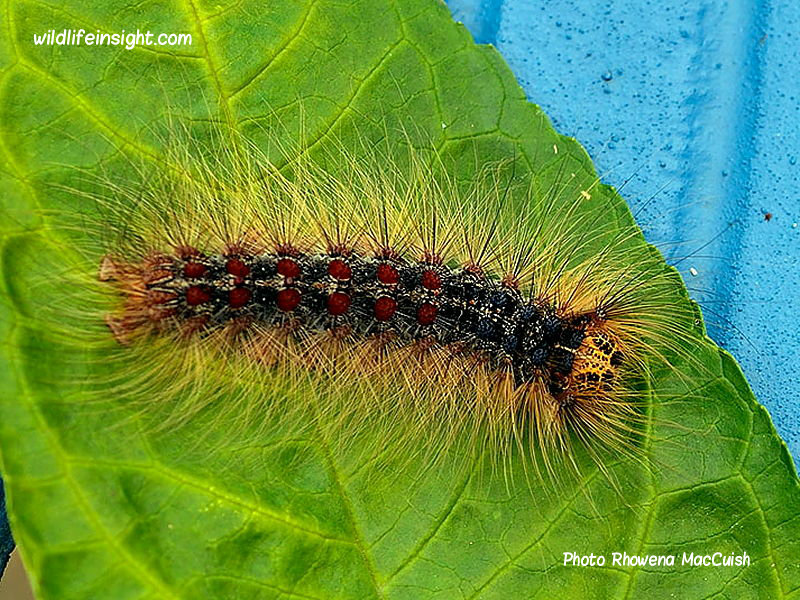 The restricted flight of the female Gypsy Moth has led to discussions as to how the species is able to significantly extend its range, particularly across large natural barriers such as seas.

Dispersal of young caterpillars has been recorded by ballooning – early instar caterpillars on silk threads being carried by the wind.

In the recommended Caterpillars of Eastern North America by David Wagner reference is made to the caterpillars being dispersed several hundred metres by ballooning.

However, ballooning has its distance limitations and in the Uk it’s thought that imported eggs on timber could explain the reappearance and spread of the Gypsy moth.

While in the US, all eastern state populations are believed to have originated from a single, intentional introduction in Boston in 1869, carried out in the mistaken belief the caterpillars were capable of producing commercial quantities of silk – Ref Wagner. 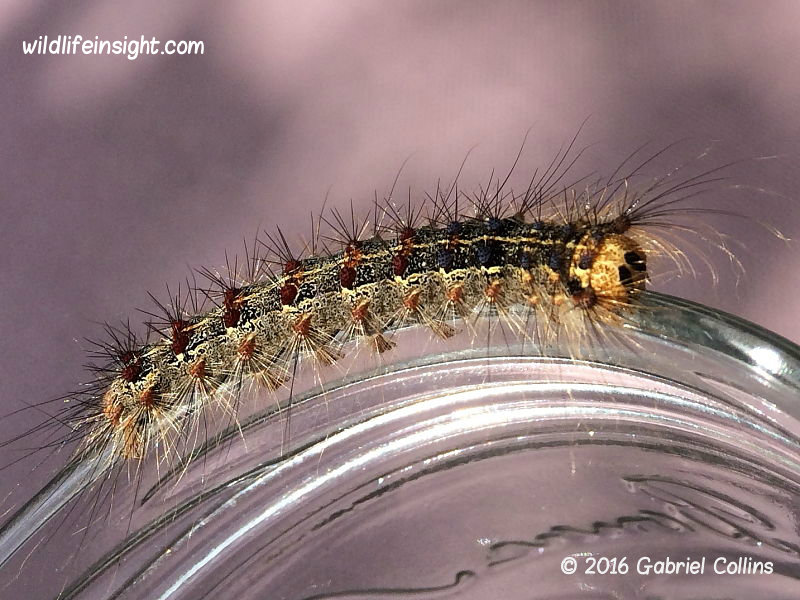 The caterpillars grow to up to 50 mm in length and are polyphagous – feeding on an extensive variety of foodplants including many different species of deciduous tree.

The caterpillars feed gregariously until fully grown when they seek out places to pupate on the trunks of trees or on man made structures such as sheds and fences.

Pairs of blue and red spots extend down the dorsum from the head.

The pairs nearest the head are bright blue and those lower down a deep red. 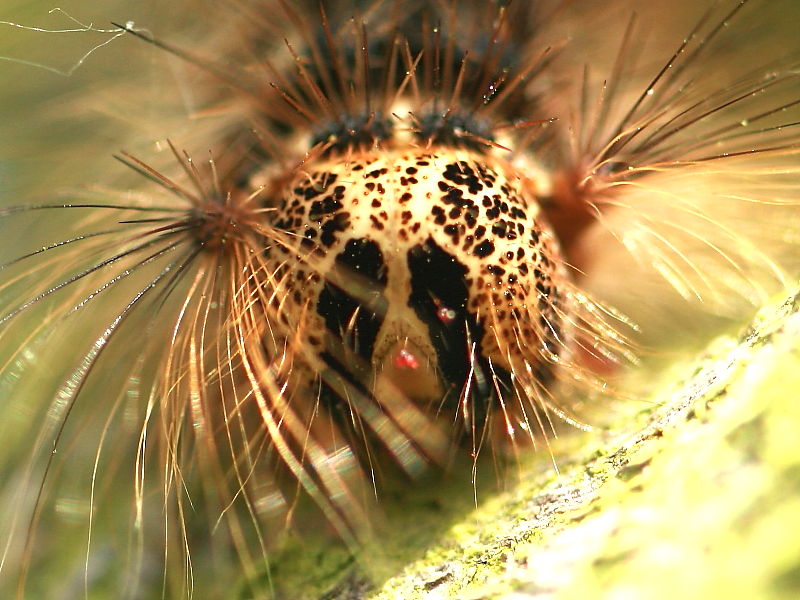 The face is distinctive, cream with dark brown mottling and a pair of downward extending black stripes.

Other moth caterpillars can be seen in the caterpillar galleries below 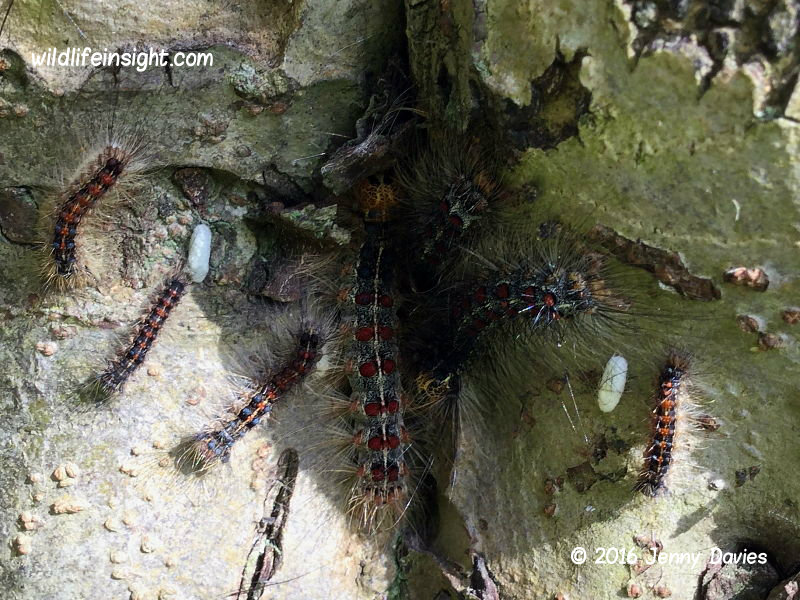 Large numbers of caterpillars in different instars may be found on the trunks of the larval host tree.

The different instars below were recorded by Isabella Read feeding on Wisteria.

Others may also be featured in latest news and sightings 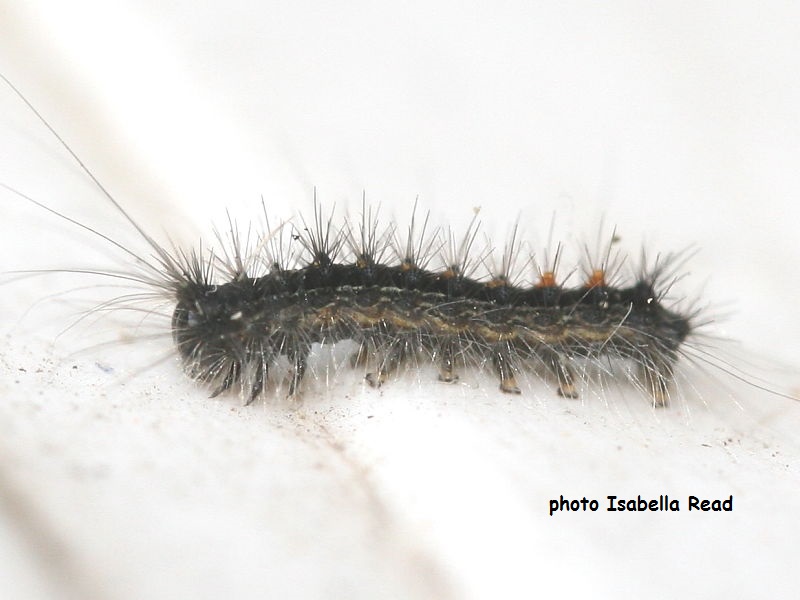 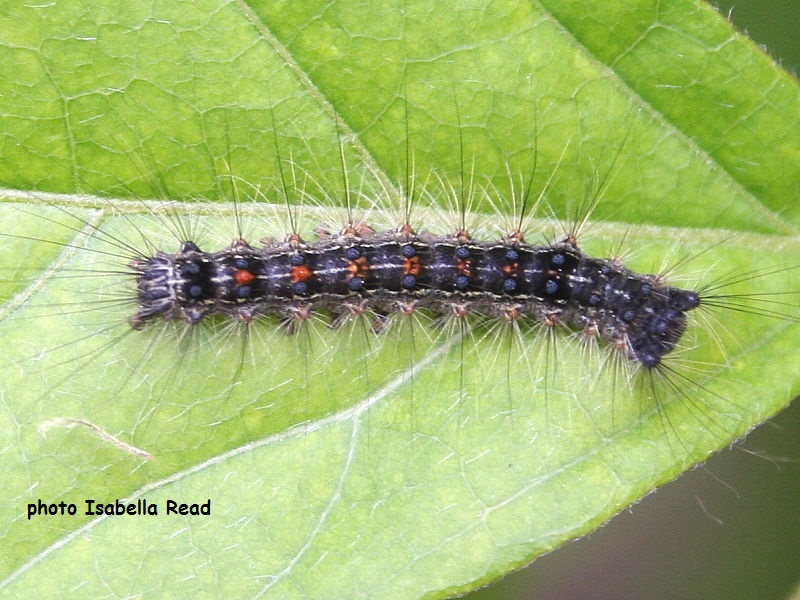 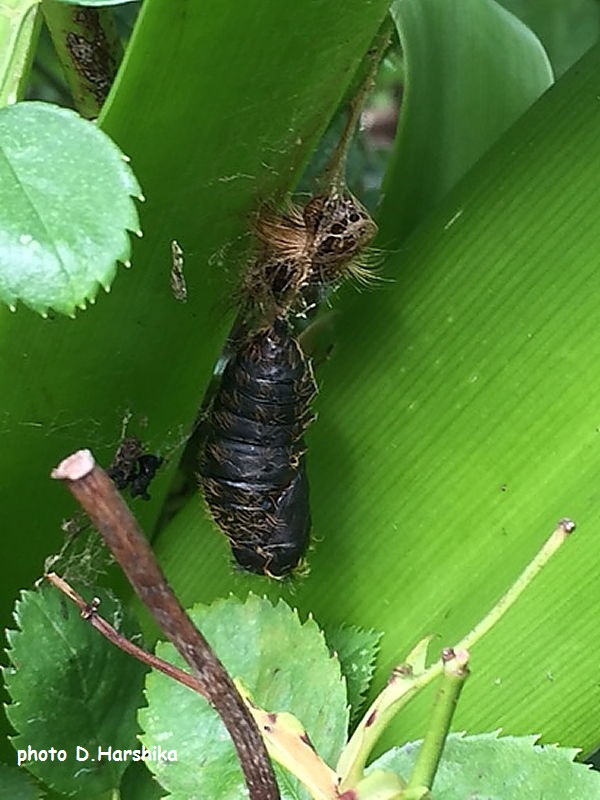 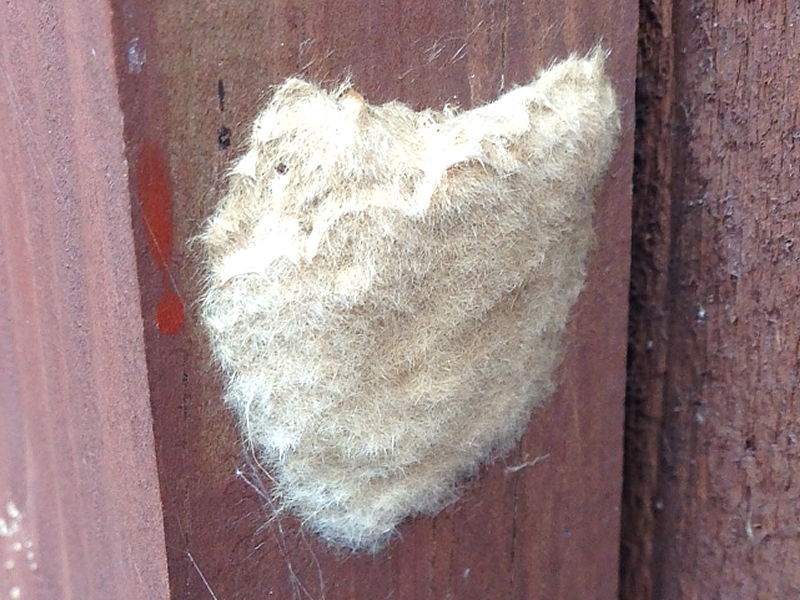 The female Gypsy Moths lays a large cluster of eggs and coats them in hairs.

The eggs overwinter before hatching in the Spring.

Those eggs featured were recorded by Marie Lewis in a London garden.

The fully grown caterpillars wander in search of somewhere to pupate.

Often the cocoons are formed on the bark of a tree, wooden fences or wall of a building.

The one featured was recorded by B. Harshika in a garden in Surrey, UK in July.

Defoliation of trees and hedging by Gypsy Moth caterpillars 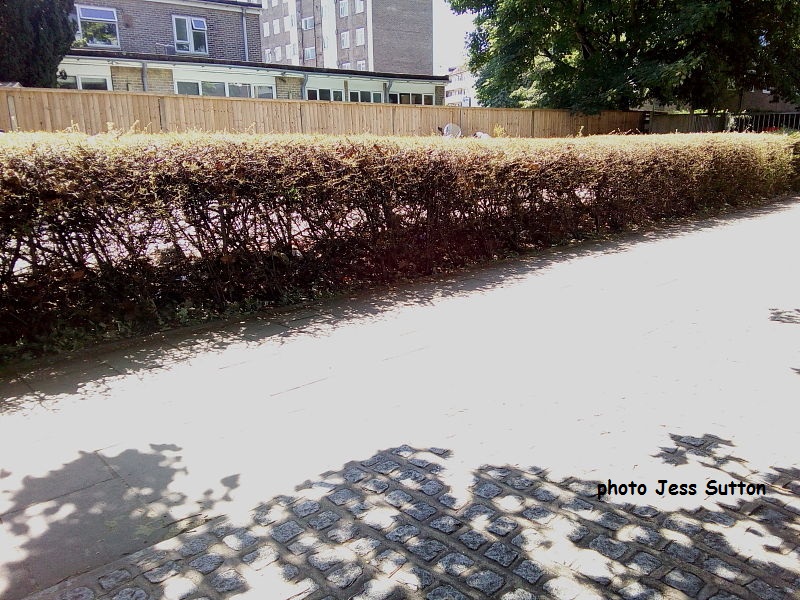 These photos of pyracantha hedging defoliated by Gypsy Moth caterpillars in London UK were taken by Jess Sutton in Hammersmith, London, UK.

The caterpillars are polyphagous and worldwide they’ve been recorded feeding on several hundred different foodplants.

The extent of defoliation that can be caused to trees and shrubs by infestations of Gypsy moth caterpillars are well illustrated by the photos shown taken by Jess. 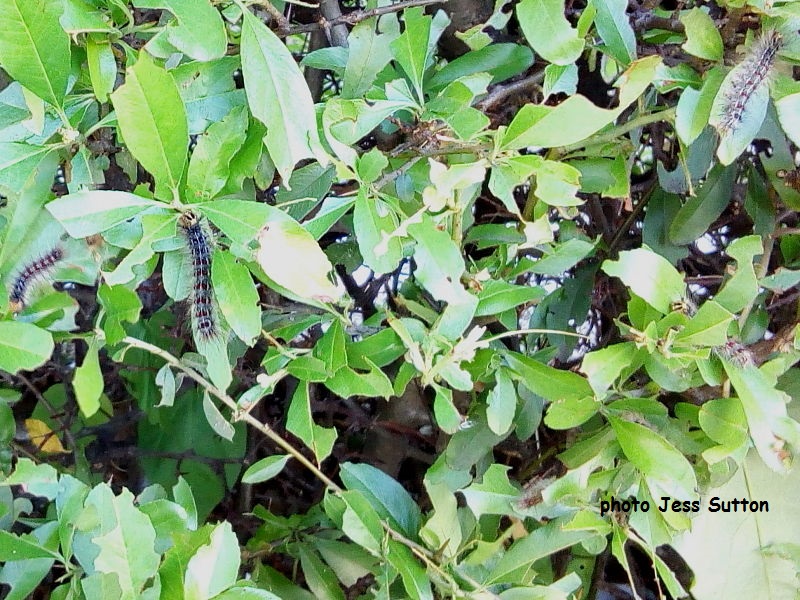 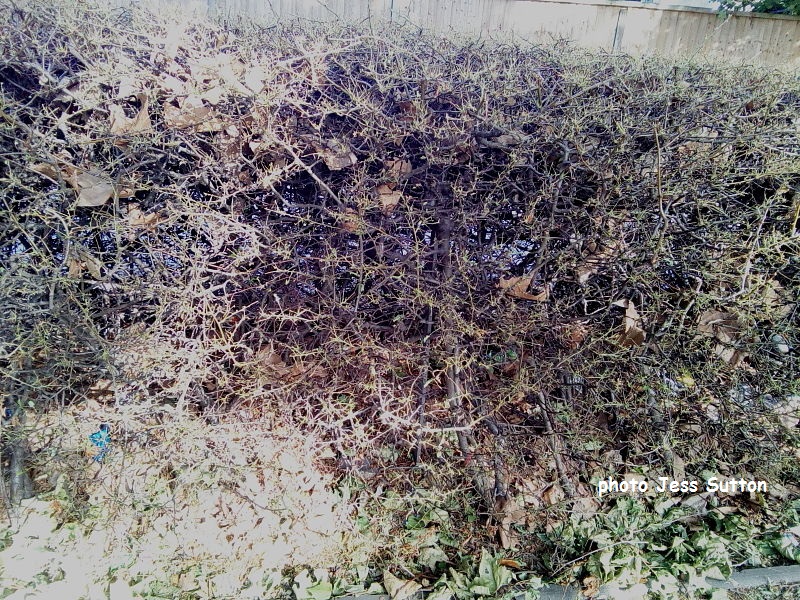 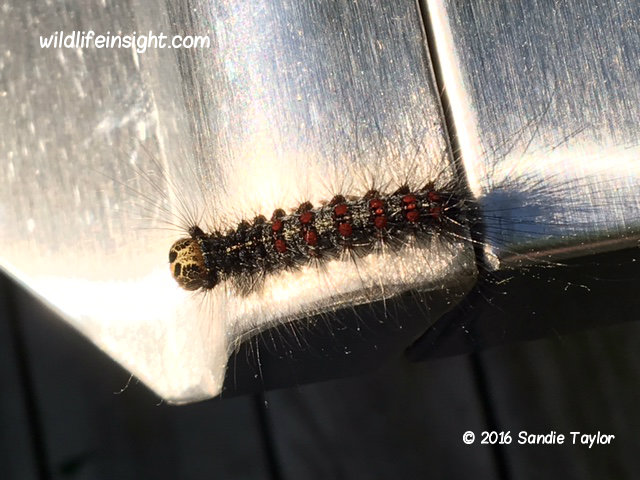 The sightings featured below are of a small sample of the sightings received from London in the Uk and the US. 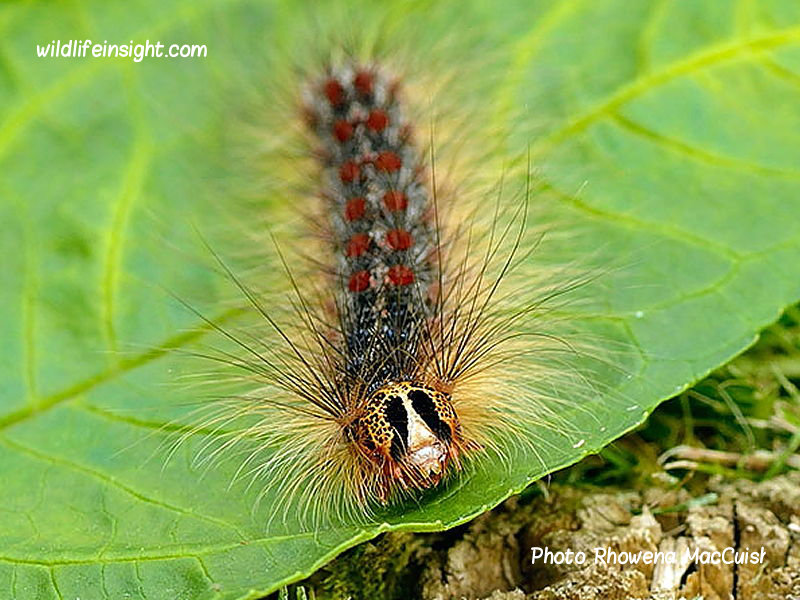 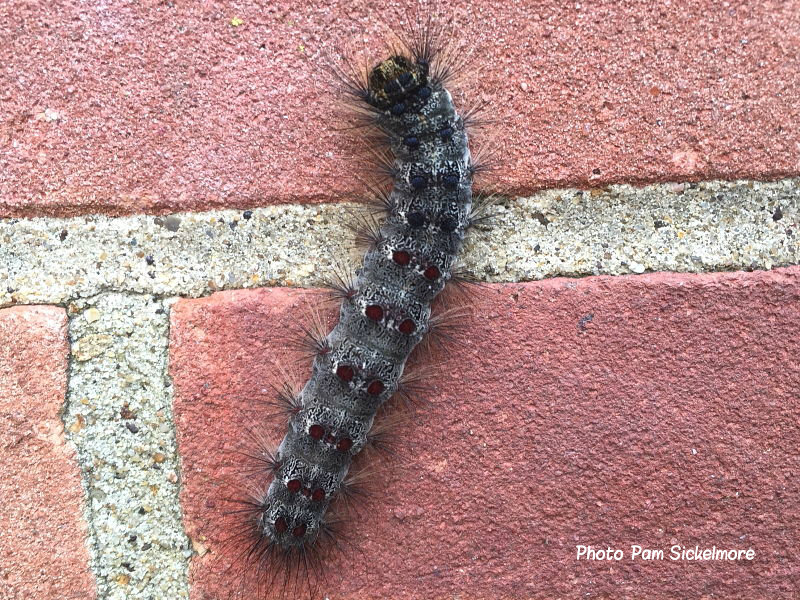 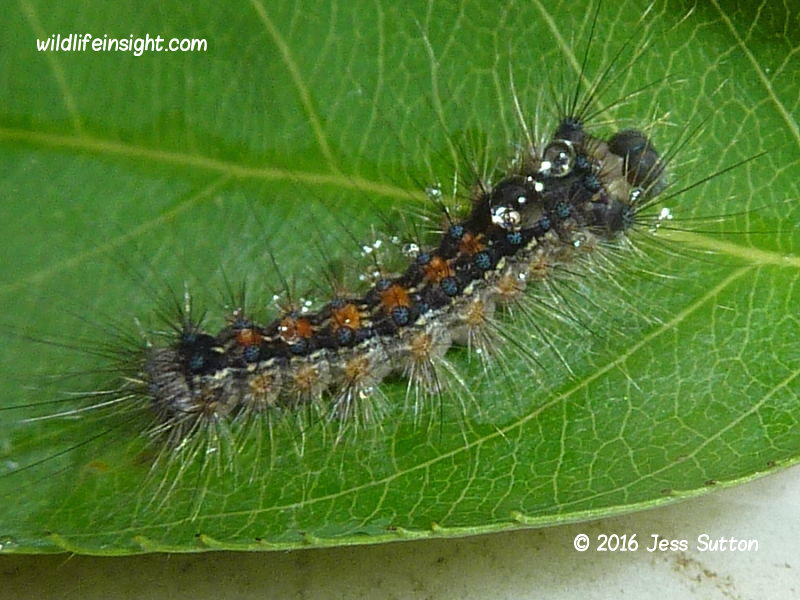 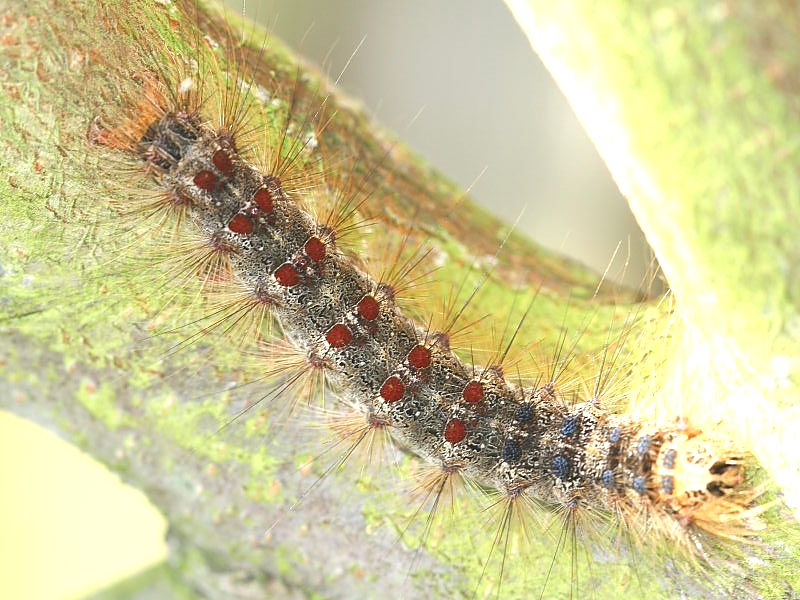 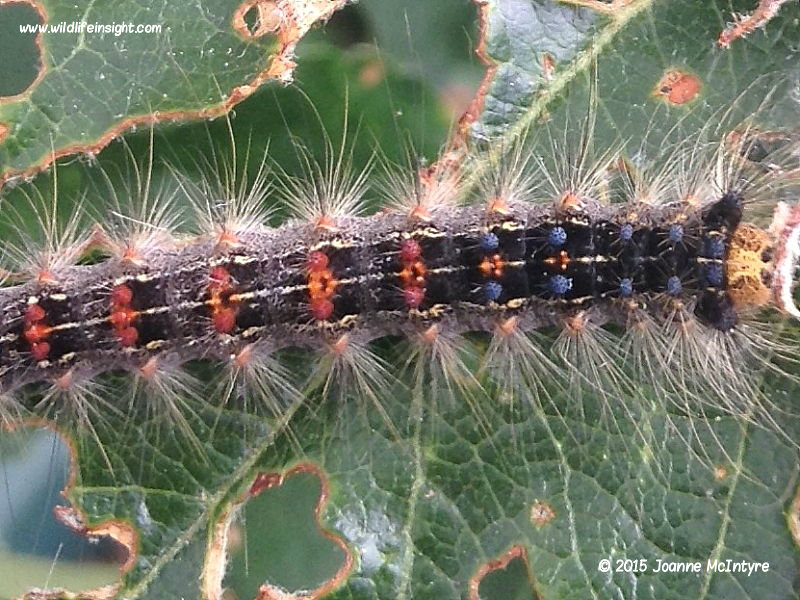 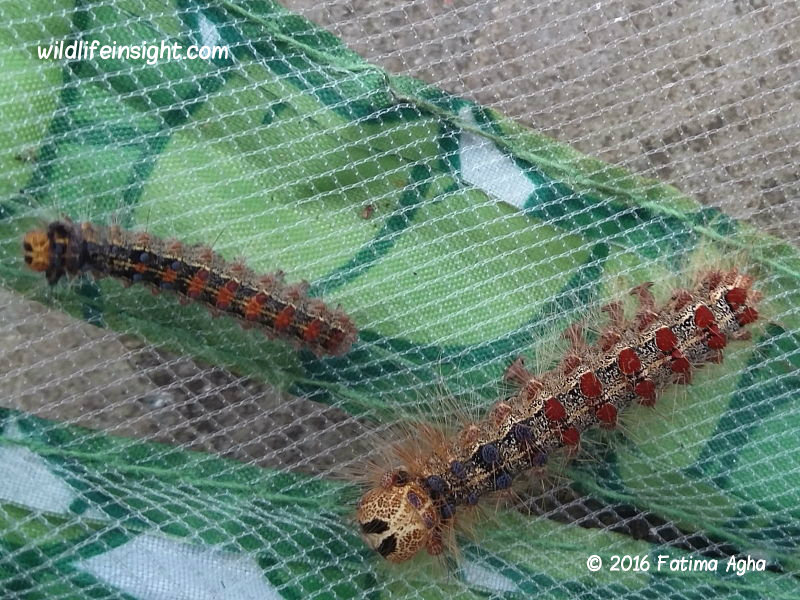