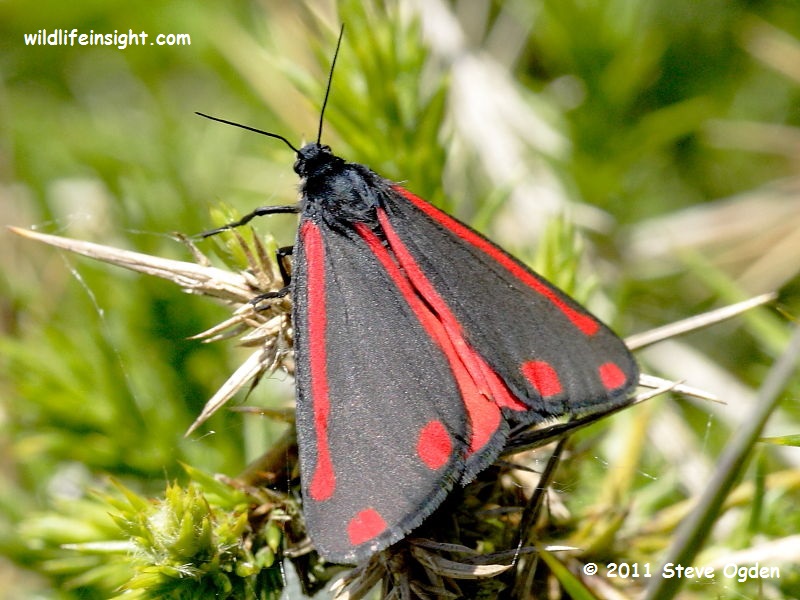 The red and black Cinnabar Moth is a common species in southern and central parts of the British Isles becoming scarcer further north and into Scotland. It’s also found in many other European countries.

It inhabits a wide variety of habitats but favours dry, well grazed grasslands where the main larval foodplant, ragwort, is plentiful.

It flies mainly at night in a single generation between late April and August when it’s attracted to light but is also commonly disturbed from low vegetation during the day. 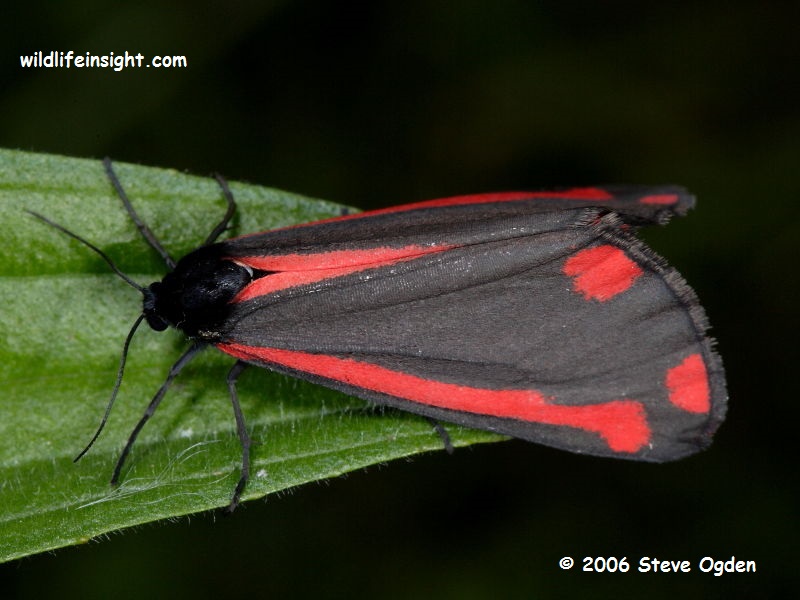 The Cinnabar Moth has a wingspan of approximately 40 mm.

The females lay large batches of yellow eggs on the underside of the leaves of the larval foodplant.

Other red and black moths often encountered during the day in similar habitat are the Burnett moths.

The Ruby Tiger Moth can also seem surprisingly red when in flight if disturbed during the day.

Other moths can be seen in the species pages, galleries and Latest sightings 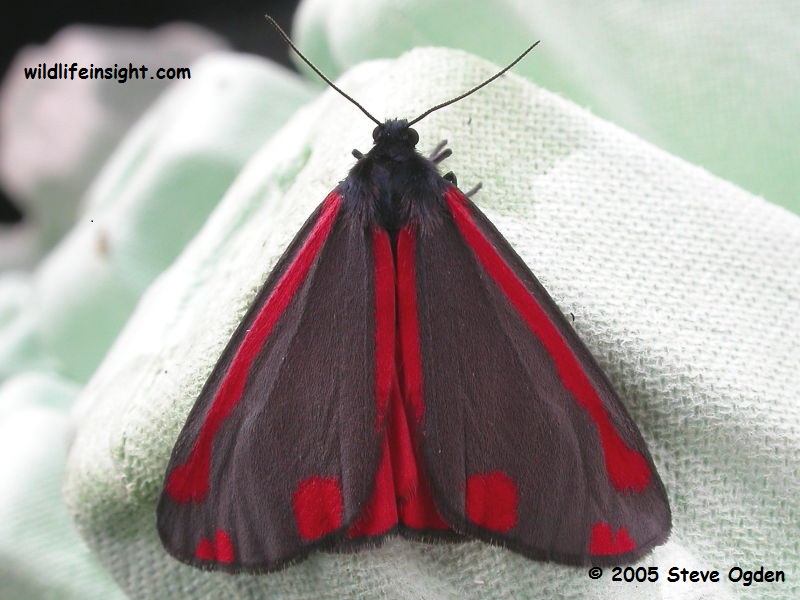 Photographs are of moths and caterpillars recorded in many sites throughout the south west including Avon, Somerset, Devon and Cornwall.

More caterpillars can be seen in the Caterpillar galleries

Jim Porter’s Colour Identification Guide to Caterpillars of the British Isles.
Field Guide to the Moths of Great Britain and Ireland – Waring, Townsend and Lewington.
The Provisional Atlas of UK’s Larger moths-Randle, Fox and Parsons 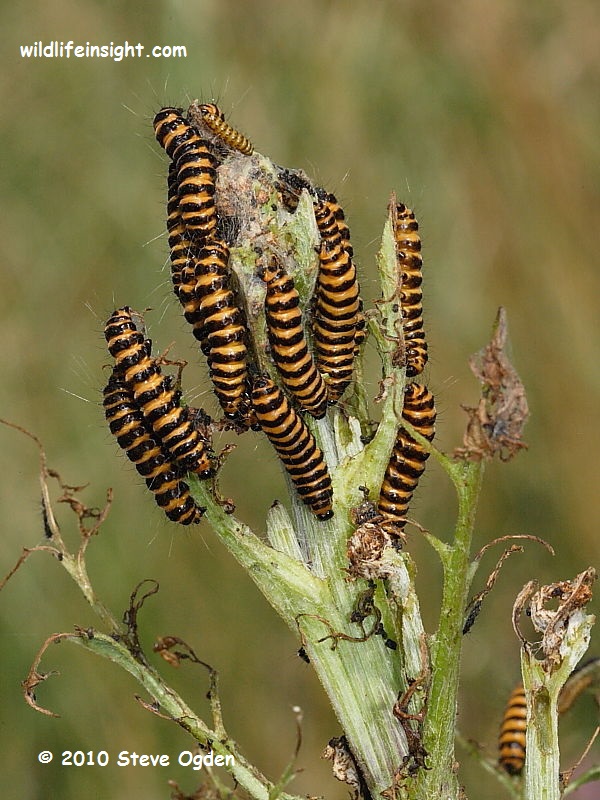 The black and yellow striped caterpillar of the Cinnabar Moth is one of the most instantly recognisable caterpillars in the British Isles and Europe.

The caterpillars grow up to 28 mm and feed mainly on ragwort but also groundsel and colt’s foot (ref Porters).

The conspicuous caterpillars feed gregariously on the larval food plant during the day mainly between May and August.

Their bright colours warn birds and other predators that they are distasteful.

The larval food plant is often denuded of leaves. When this happens cannibalism may occur with surviving caterpillars wandering in search of a new food source.

When fully grown the caterpillars leave the foodplant and pupate just beneath the surface of the soil.

They overwinter as a pupa.

Another caterpillar with yellowy/orange stripes is a pre wintering Fox Moth caterpillar. 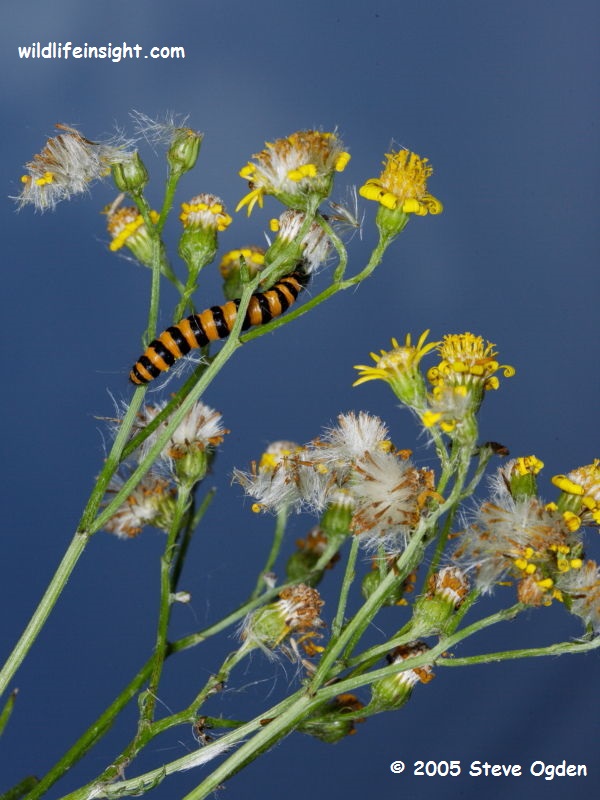 In recent years there has been a decline in Cinnabar numbers throughout much of its range.

One reason for this decline is thought to be attempts to eradicate ragwort, the caterpillars main foodplant.

Ragwort has caused much debate over the years due to it being poisonous to livestock.

Reports suggest that ragwort, while still growing and green, is unlikely to be eaten by livestock such as horses. However, when dry and mixed with hay it may be consumed by animals. Sometimes in sufficient quantity to be fatal.

Hopefully, management practices will evolve that protect livestock while still leaving the ragwort to flourish as they are a valuable plant for many insects. 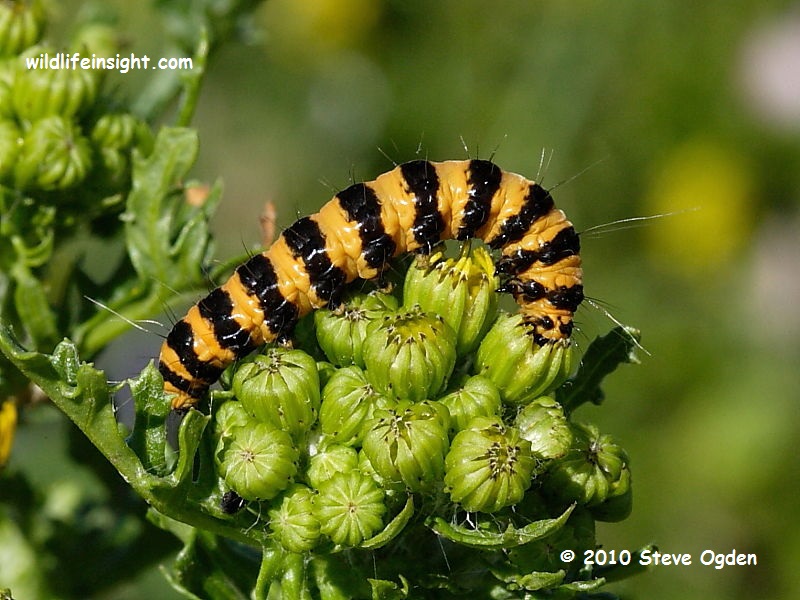 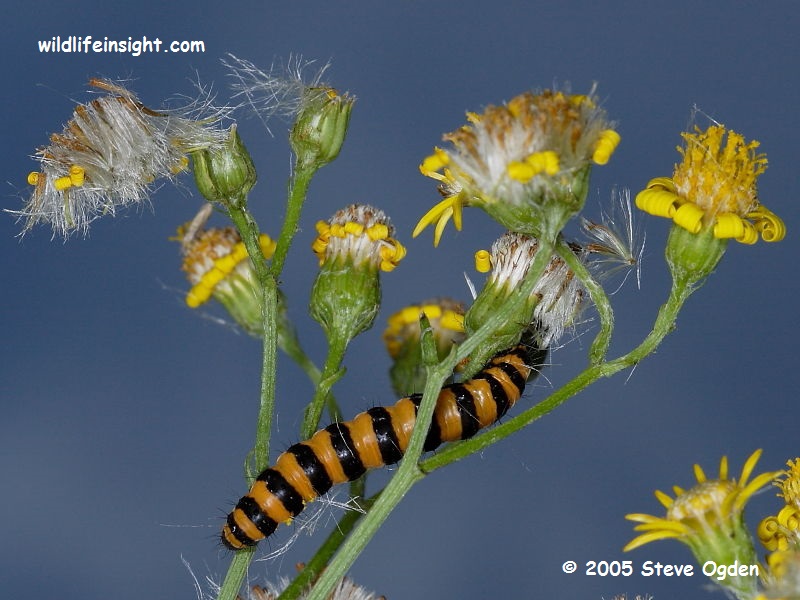