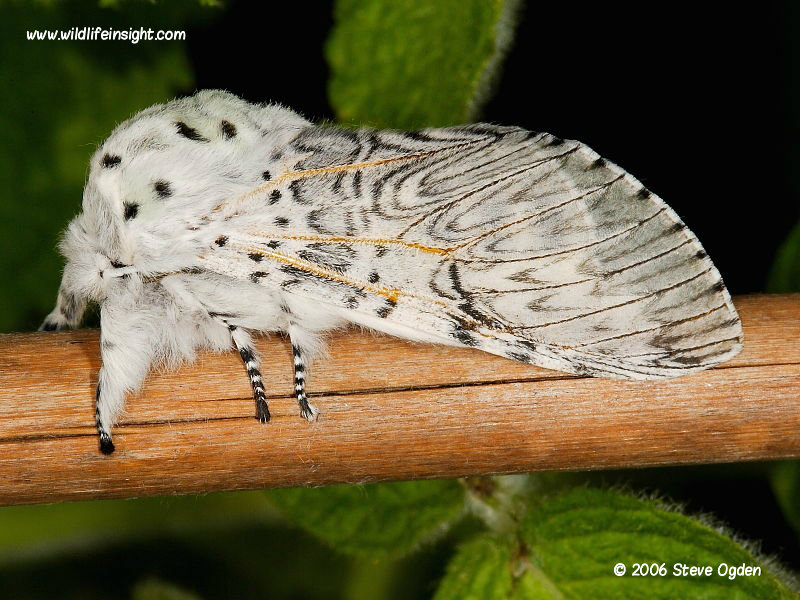 The Puss Moth, Cerura vinulais, is well recorded through most of the southern half of the British Isles becoming less common in the north.

This distinctive nocturnal moth flies in a single generation between May and July when it is attracted to light.

It can be found in a wide range of habitats including moorland, gardens and open woodland.

Photographs and information of the Puss Moth’s complete life cycle from egg, caterpillar, pupa to adult moth together with rearing information are featured below. 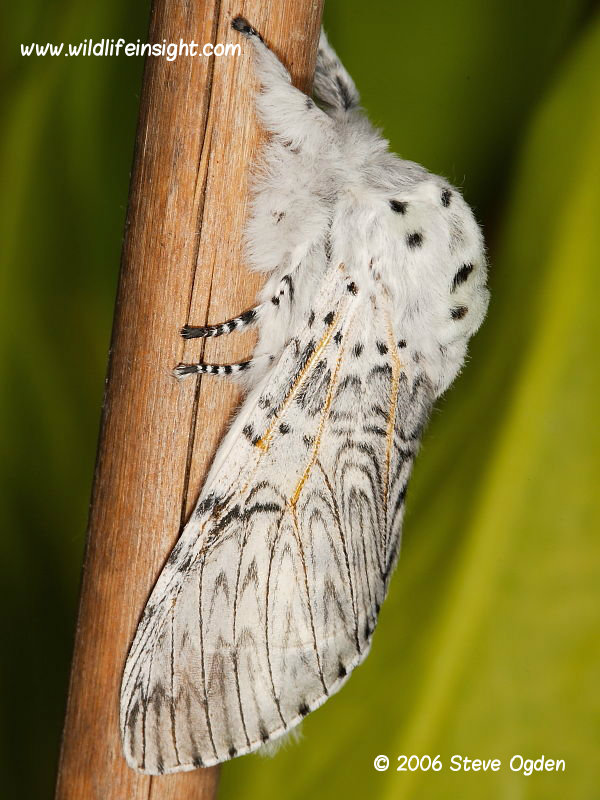 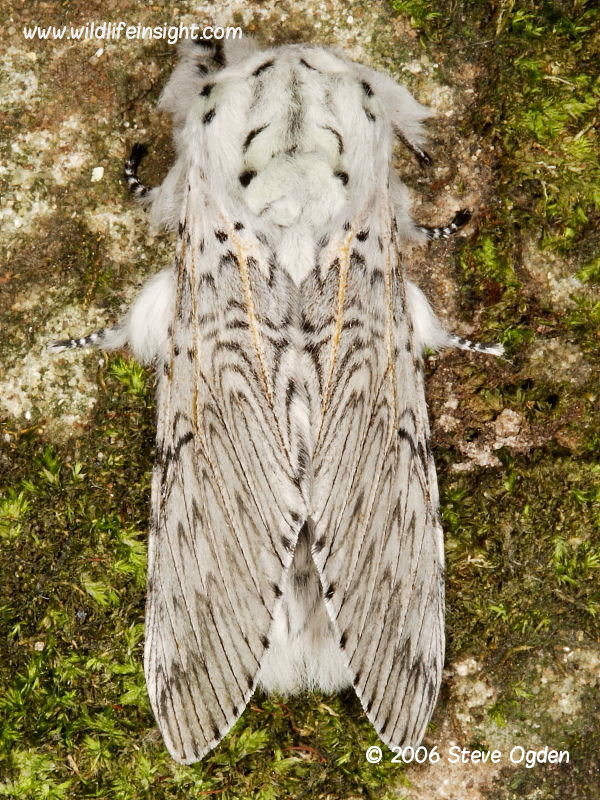 The Puss moth is a distinctive species with a forewing length of up to 38mm. The forewings are greyish white with a series of black lines and marks.

The head and upper front legs are coated in white hairs.

Other notable features are the three orange veins radiating from its head down the forewings.

Other medium sized black and white moths found in similar habitats include the Leopard Moth and Black Arches.

In North America the caterpillar of The South Flannel Moth is also known as the Puss Moth Caterpillar but is unrelated and carries a nasty sting. 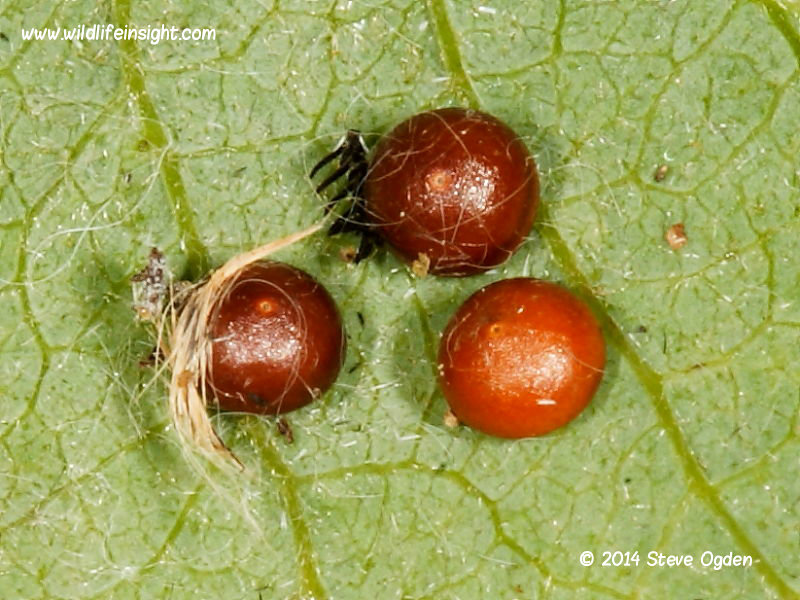 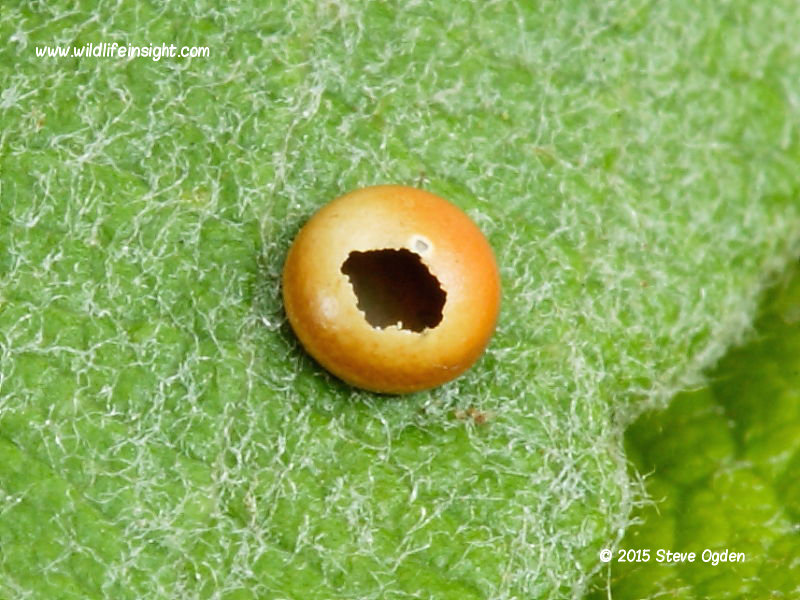 The female Puss Moths lay orange brown eggs on the upper side of the food plant leaves between May and July.

The distinctive eggs are laid in small groups of less than five and not difficult to find. 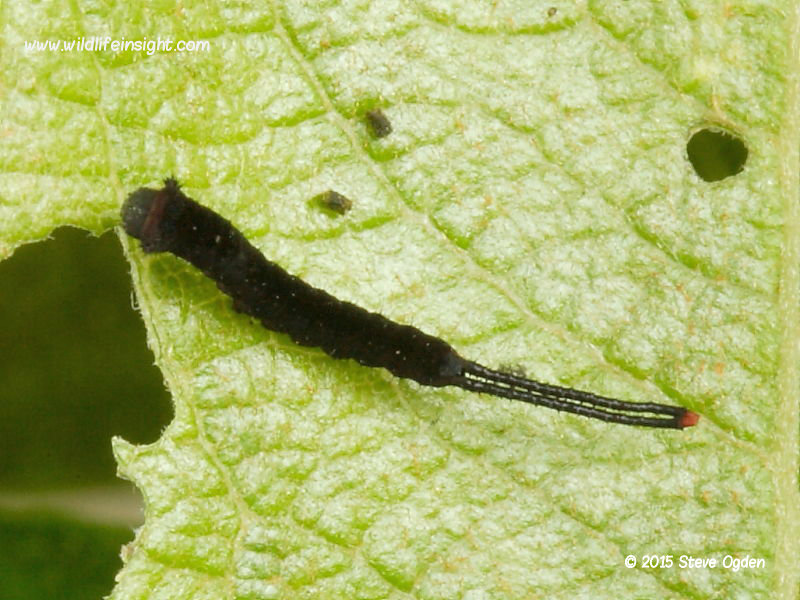 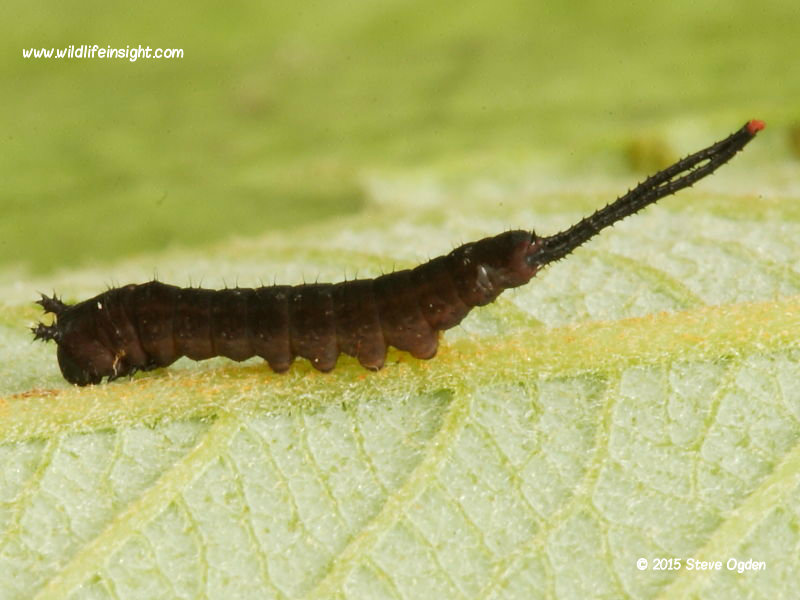 The eggs hatch within 14 days.

If hatched eggs are found a close inspection of nearby leaves often reveals the tiny caterpillars.

The caterpillars are dark brown at first with a pair of small horn like protuberances on the dorsum behind the head.

A pair of red tipped, modified rear claspers, over half the body length long, are raised to warn off predators when disturbed. 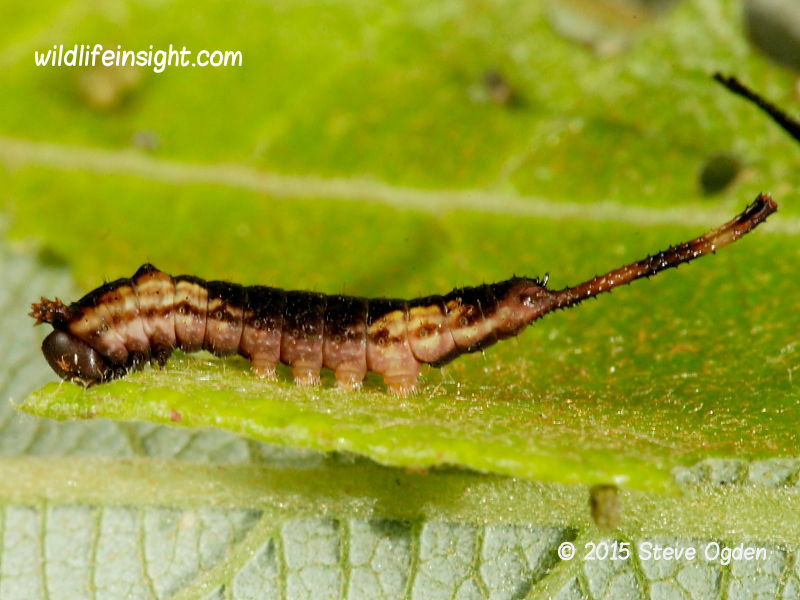 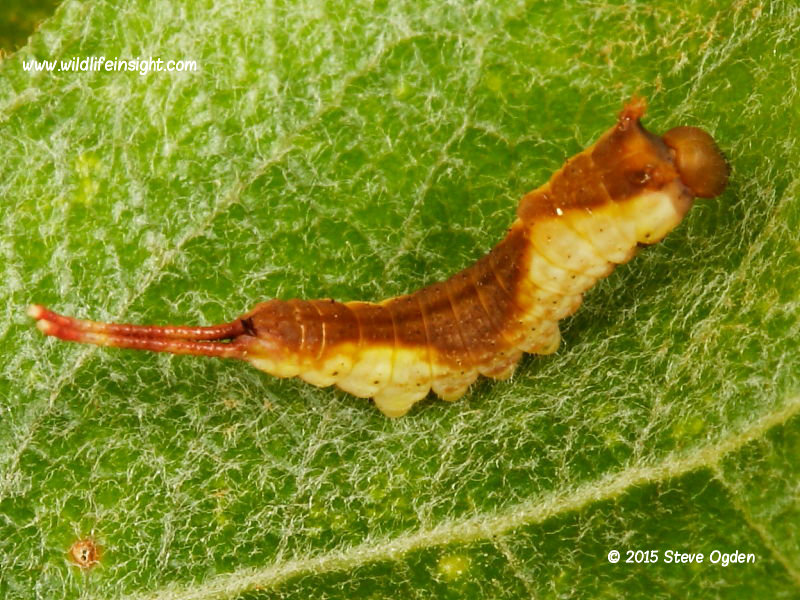 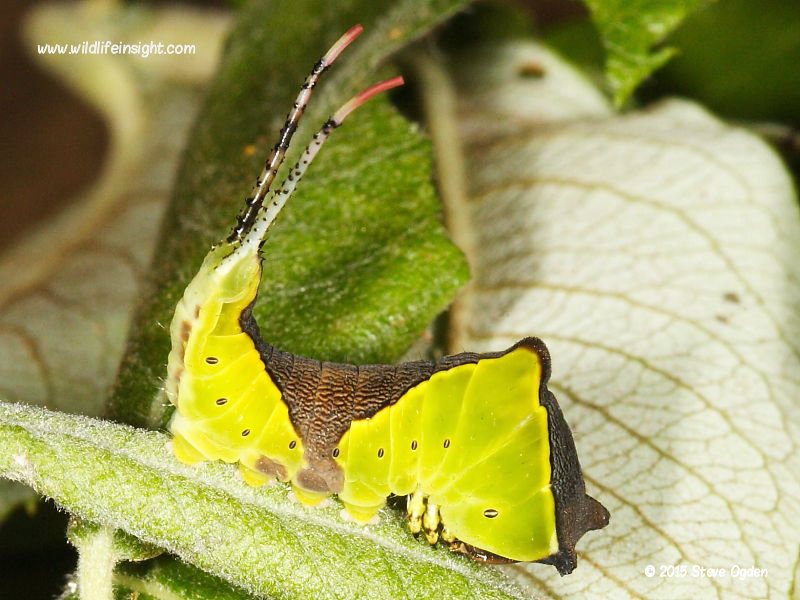 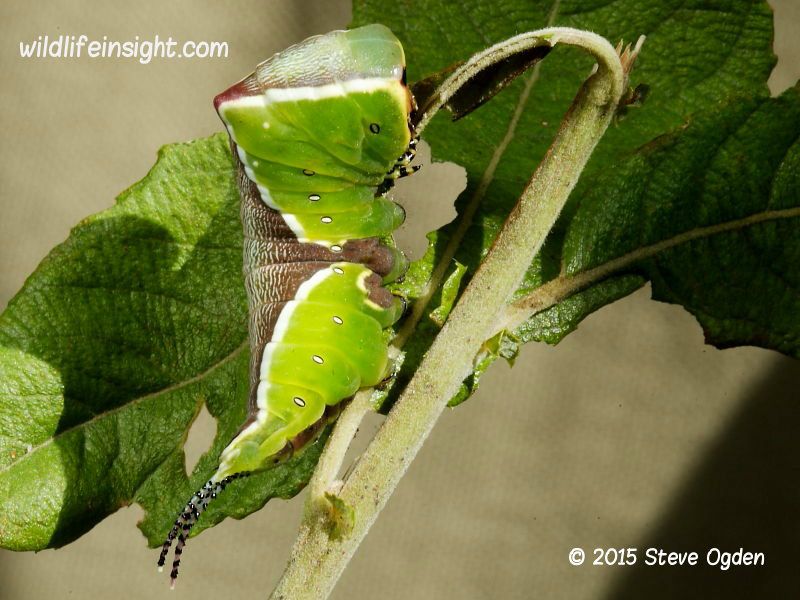 Within 7 days the caterpillars have changed into a third instar – the subtle shades of brown, yellow and green designed to blend in with the foodplant leaves.

The caterpillars continue to feed on top of leaves as they grow. In strong sun light their dark silhouette on the upperside of a leaf may at times be seen when looking up from below. Moulted skins are eaten.

When in the penultimate instar the two elongated adapted rear claspers from which red flagellae extend when threatened are fully developed.

In final instars the red head surround, the shape of the brown saddle and the white edging highlighting the divide between brown upper and green lower body pattern are distinctive identification feature.

Within 30 days of hatching the Puss Moth caterpillar is about 60mm in length and fully grown. 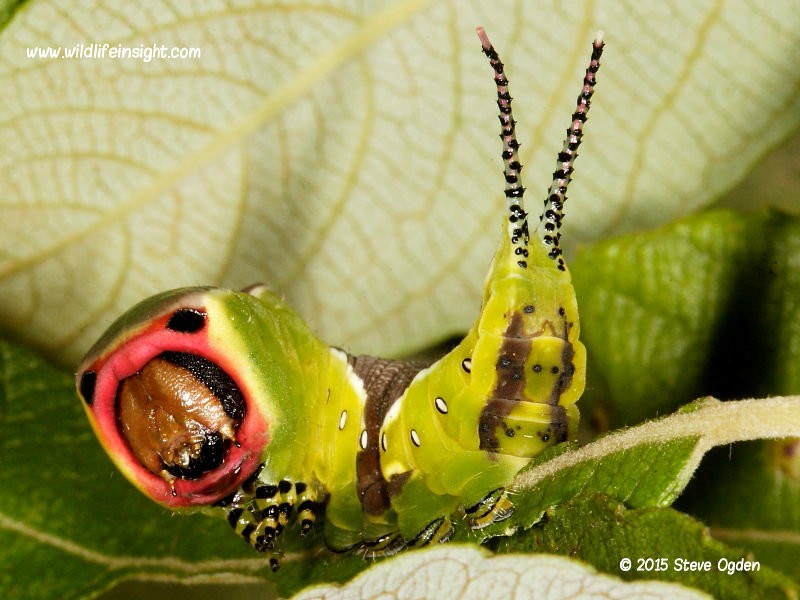 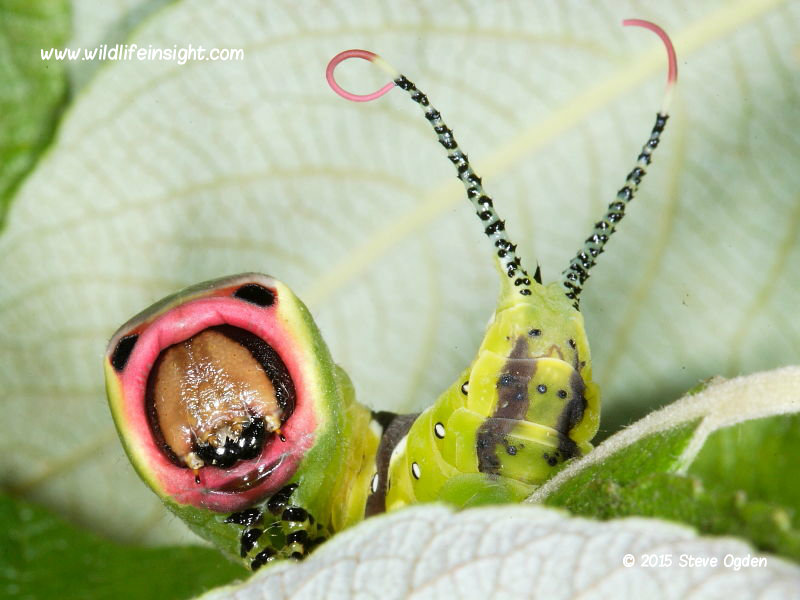 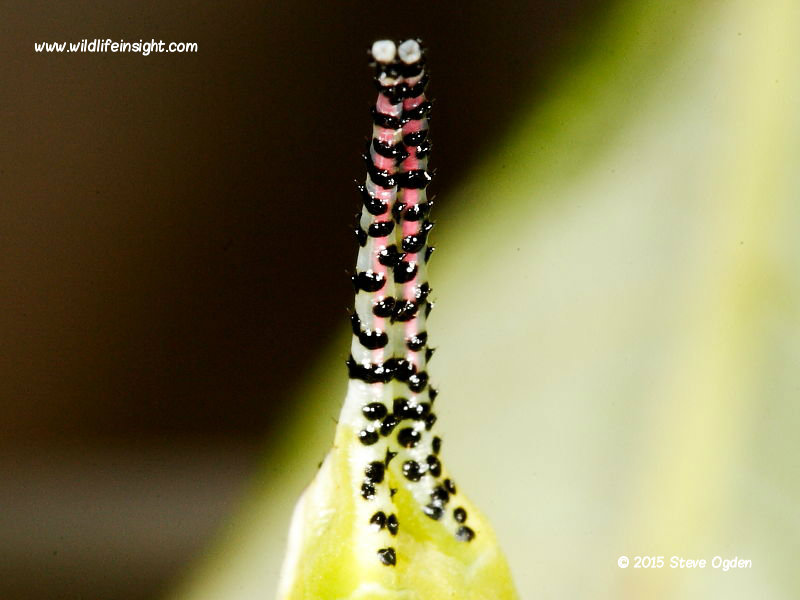 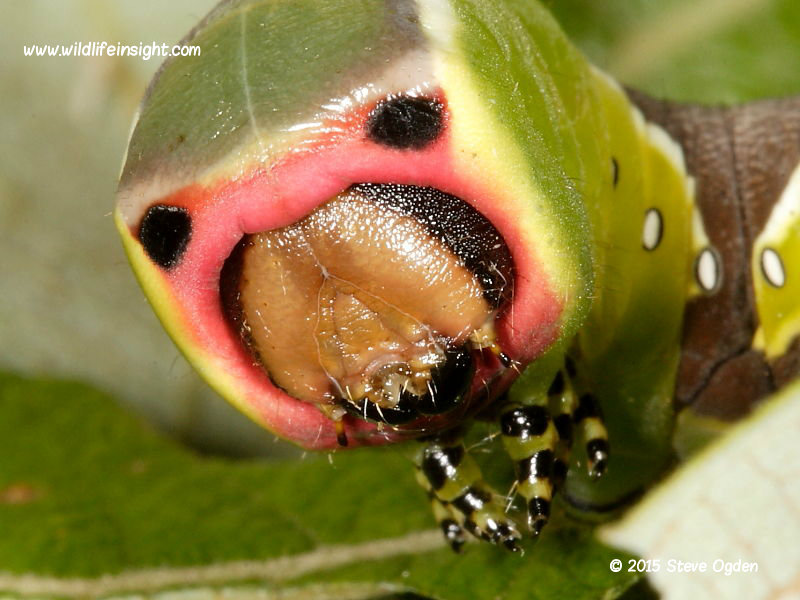 Most caterpillars are fully grown by late July/early August.

At this stage the Puss Moth prepupating caterpillar turns from green to a dark purplish colour.

Having stopped feeding it will often leave the food plant to search for a suitable place to pupate.

It is at this stage, when wandering over the ground, that it is frequently come across – resulting in many caterpillar identification requests.

Using its strong jaws the Puss Moth caterpillar forms a very hard cocoon by chewing up bark and cementing it with silk into crevices in tree trunks and woody/plant litter.

They overwinter inside the cocoon with the adults emerging in May. 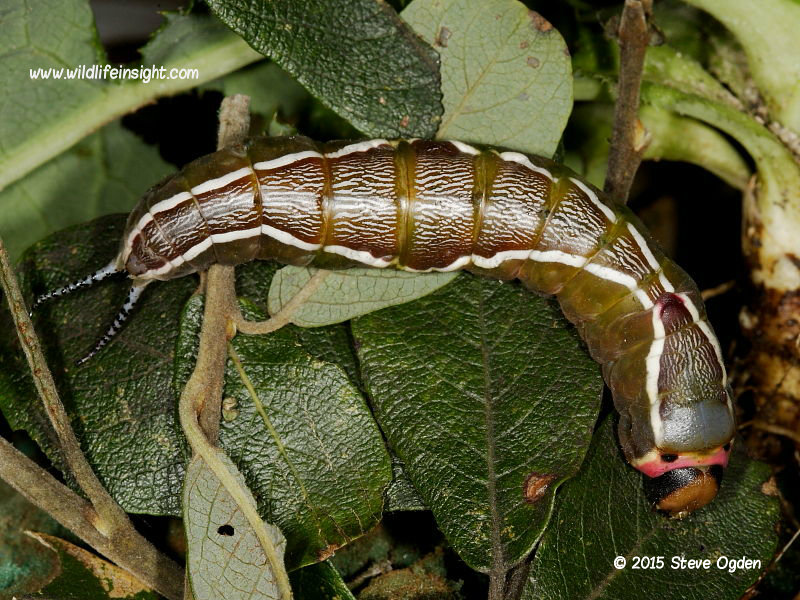 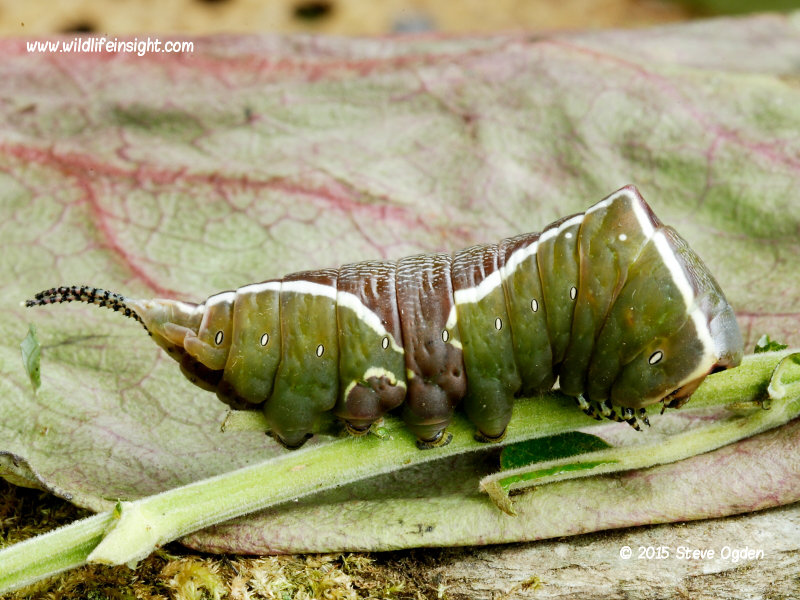 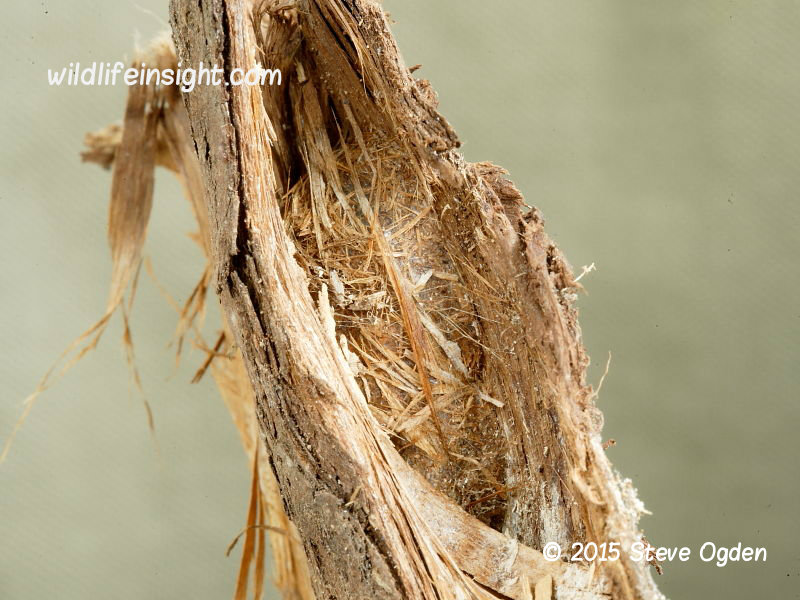 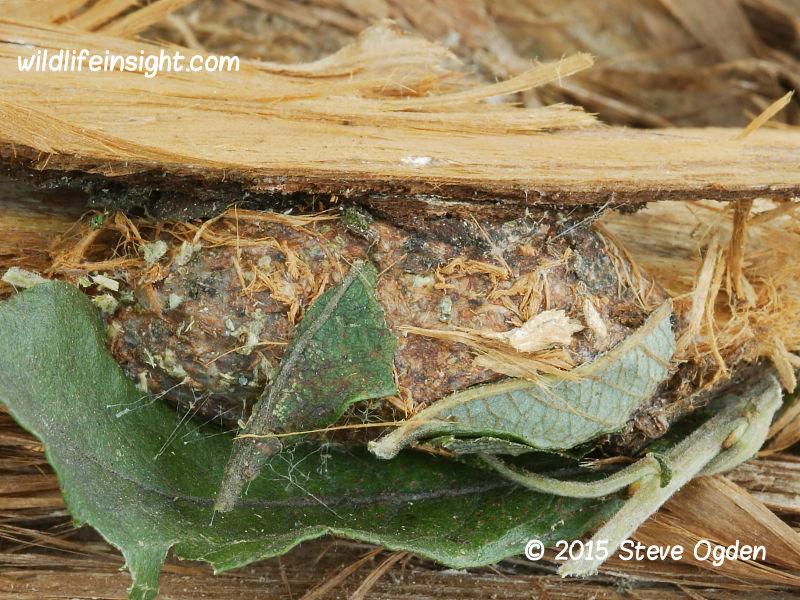 The Puss Moth is very easy to rear either from eggs or larvae.

And because of its extraordinary looks and waving flagellae it is one of the most popular species of moth for breeders.

Females attracted to light will sometimes lay eggs but the orange brown eggs are also fairly easy to find on the upper side of the foodplant leaves in the wild.

The larval foodplants are sallows, willow, aspen and poplar.

Only when fully grown and in prepupating dark purple colours does it have any special rearing requirements.

As soon as it becomes actively searching for somewhere to pupate the caterpillars should be provided with bark or cardboard to chew up and construct their very tough cocoon.

The cocoons should then be placed in a cool place to overwinter.