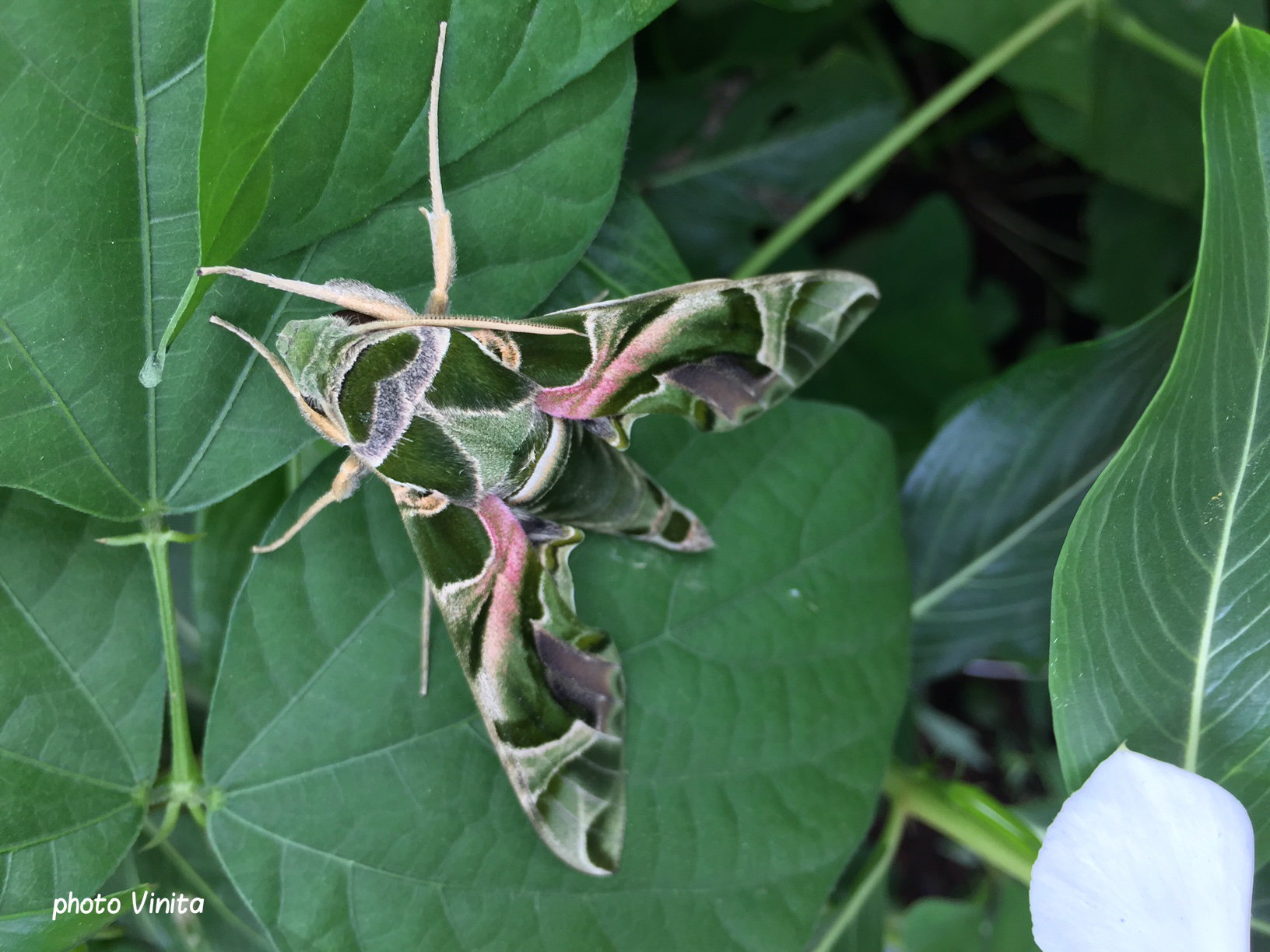 The Oleander Hawkmoth, Daphnis nerii, is a member of the Sphingidae family of moths and one of the most beautiful Hawkmoths in the world.

Although a rare migrant to the British Isles it has a wide global distribution, being recorded in much of southern Europe, Africa and Asia, either as a migrant or resident,

It has a wingspan of 90-110 mm and like many Hawkmoths is a strong flier.

Its beauty has made it one of the most sought after species amongst many lepidopterists, breeders and those interested in insect photography.

In the warmest areas of its range it has several, overlapping generations.

However, in the northern parts of Europe, where small numbers of migrants are recorded annually, it’s unable to survive the colder winters at any stage of its life cycle.

Other Hawkmoth caterpillars and moths can be seen in the Hawkmoth galleries and species pages. 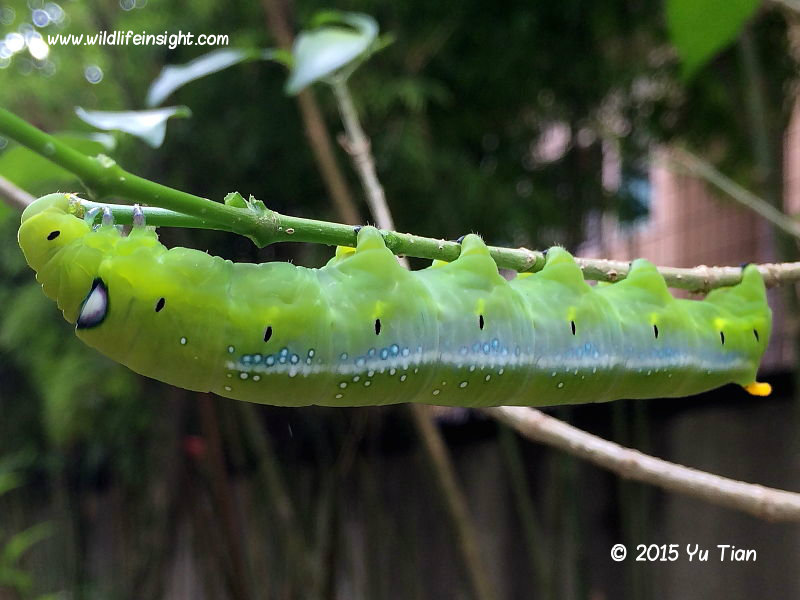 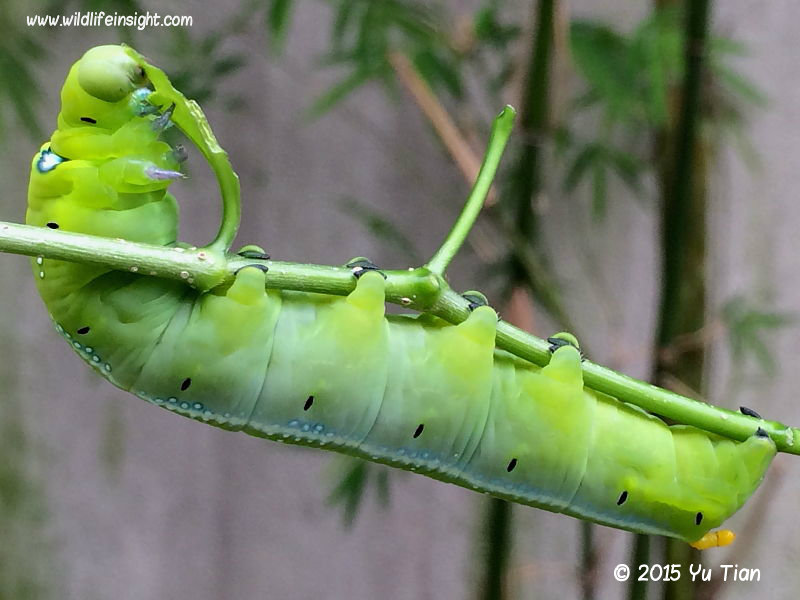 The Oleander caterpillars grow to 130 mm in length and are very variable in colour.

The pattern of the white freckling in sub dorsal and dorsal areas is quite distinctive.

The startling blue false eyes are most clearly seen when a fully grown caterpillar is threatened.

By retracting its head and arching up the swollen anterior body sections the eyes appear startlingly large, giving the impression of a much larger animal. 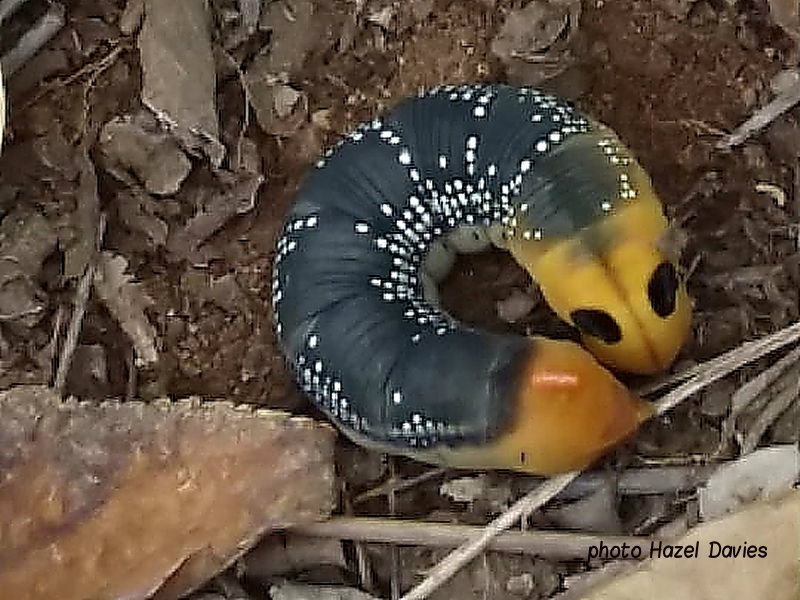 The upper half of prepupating caterpillars such as the one featured left sighted by Hazel Davies in the Krugger National Park, South Africa, is generally much darker against which the white freckling stands out.

The main larval foodplants are the flowers and leaves of oleander and periwinkle but include others such as Jasminum, Vinca and Vitis, also accepting privet in captivity – recommended references Jim Porter and A.R Pittaway (see below)

Other migrant Hawkmoths to the UK from Africa and southern Europe include the The Death’s Head Hawkmoth’s caterpillar, The Convolvulus Hawkmoth, The Striped Hawkmoth and The Hummingbird Hawkmoth. 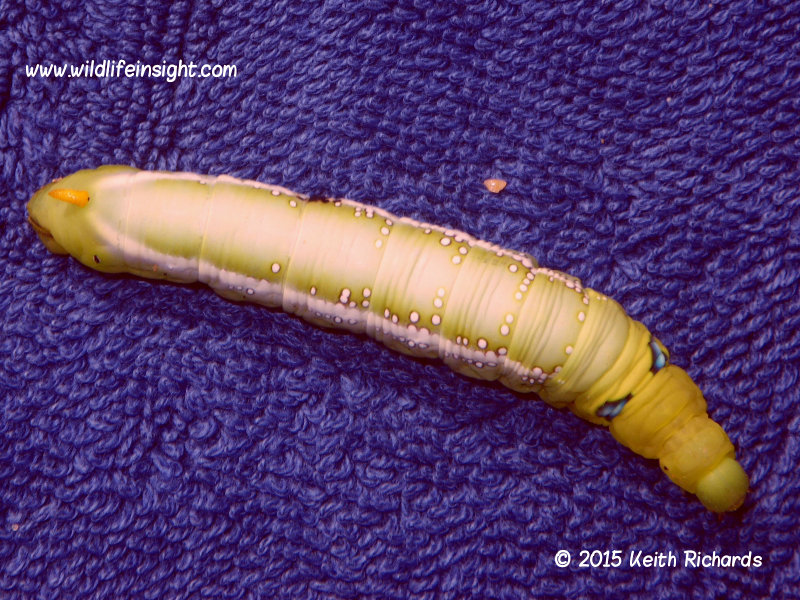 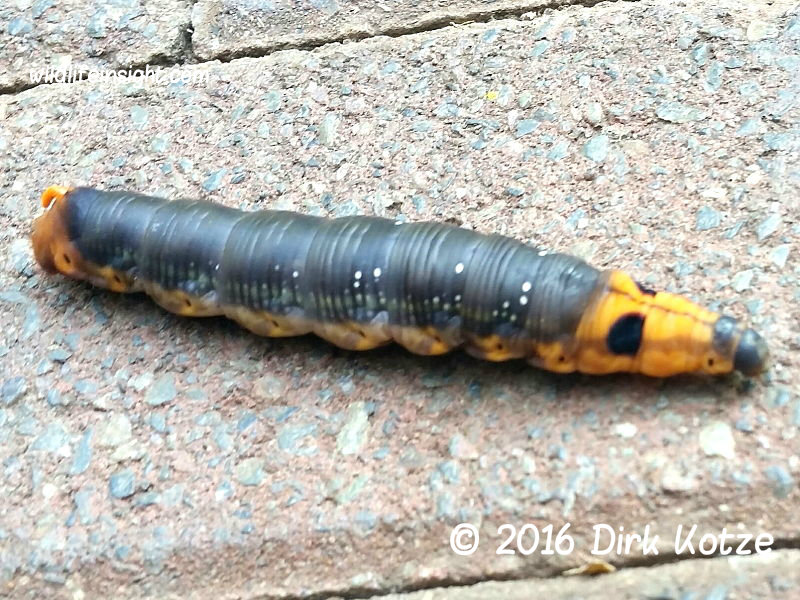 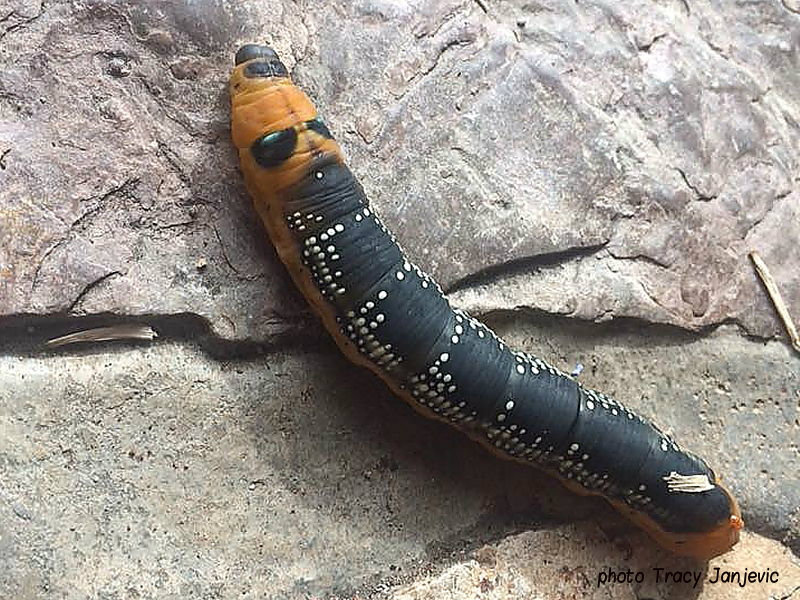 Sightings and identification requests are very welcome and images may be added to the site with accreditation. Copyright remains with the photographer. 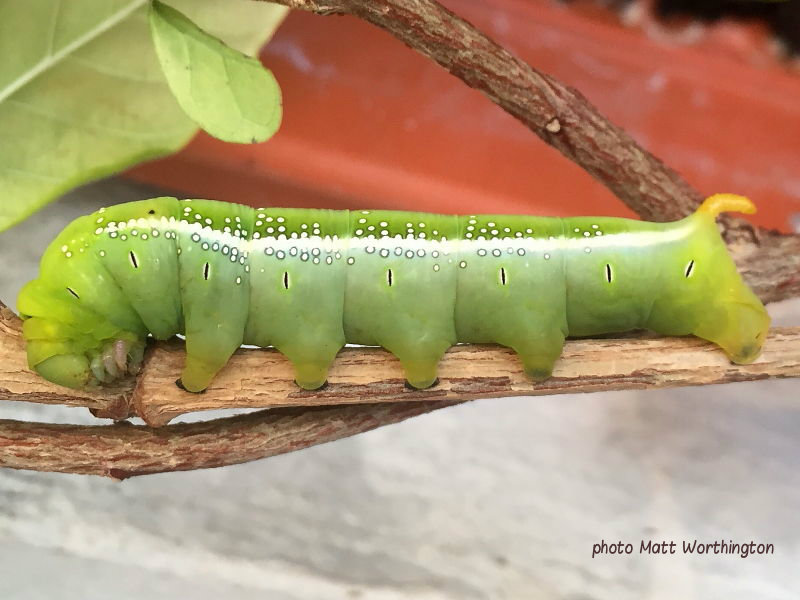 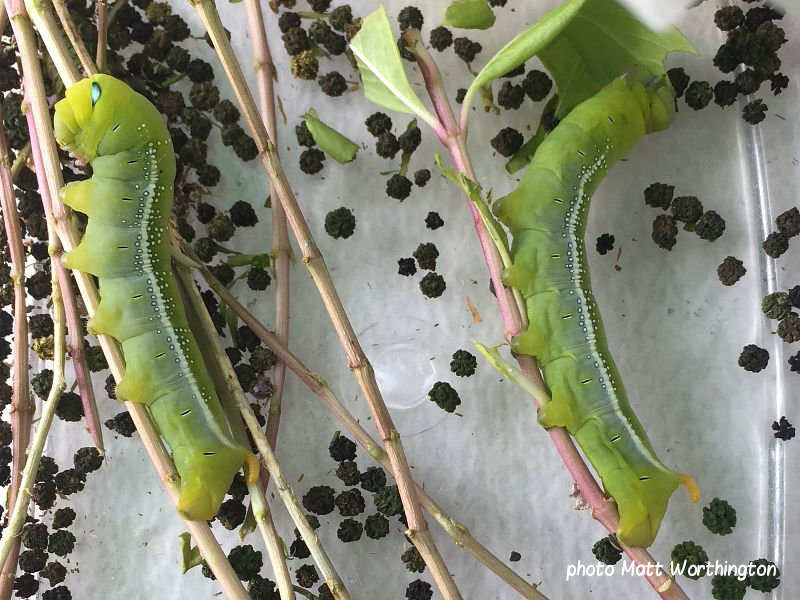 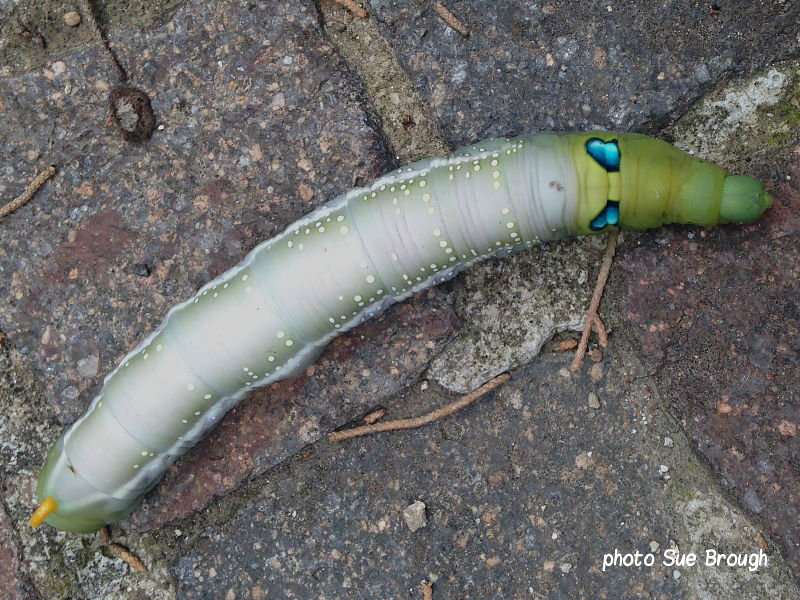 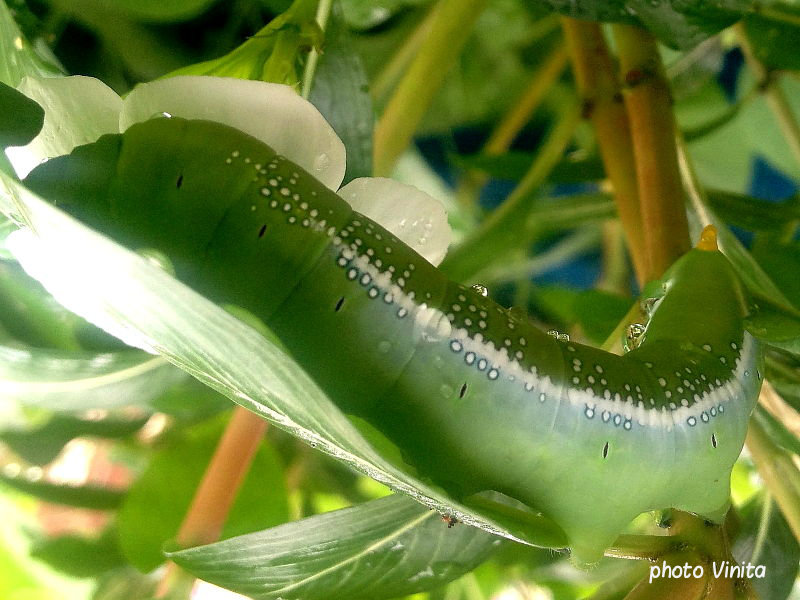 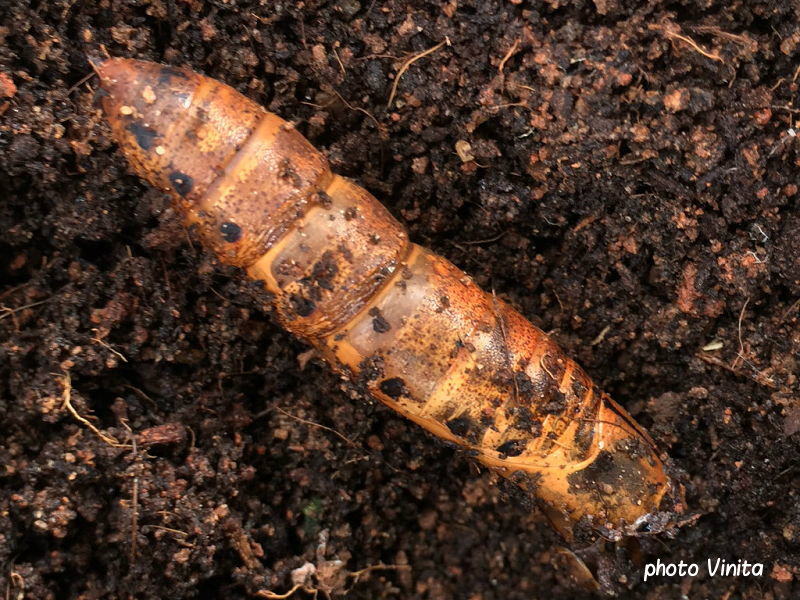 The Oleander Hawkmoths pupate amongst dry leaf litter and soil.

In warm temperatures the moth emerges within 30 days.

One caterpillar was successfully reared through with the moth emerging in 18 days.

Other Indian Oleander Hawkmoth caterpillars shown below were reported by Abhiroop Singh in the Punjab and Arindham Mukhopadhyay in West Bengal. 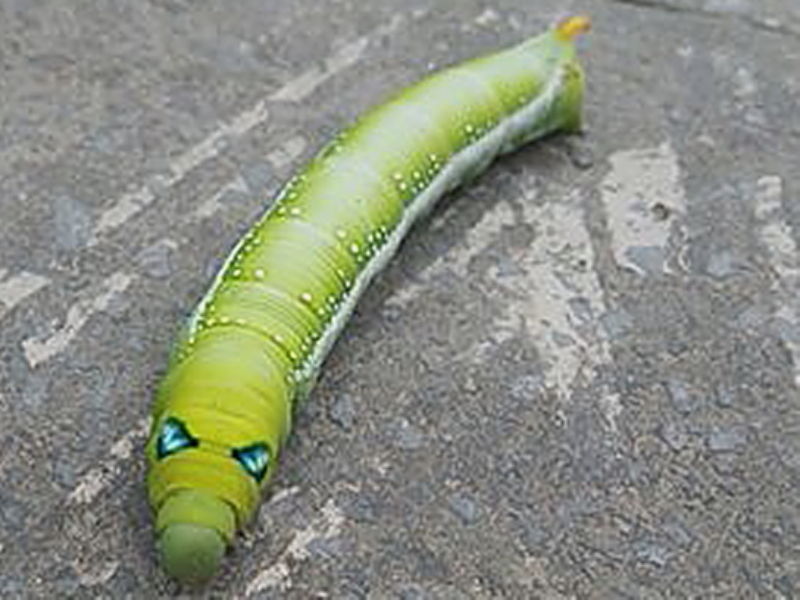 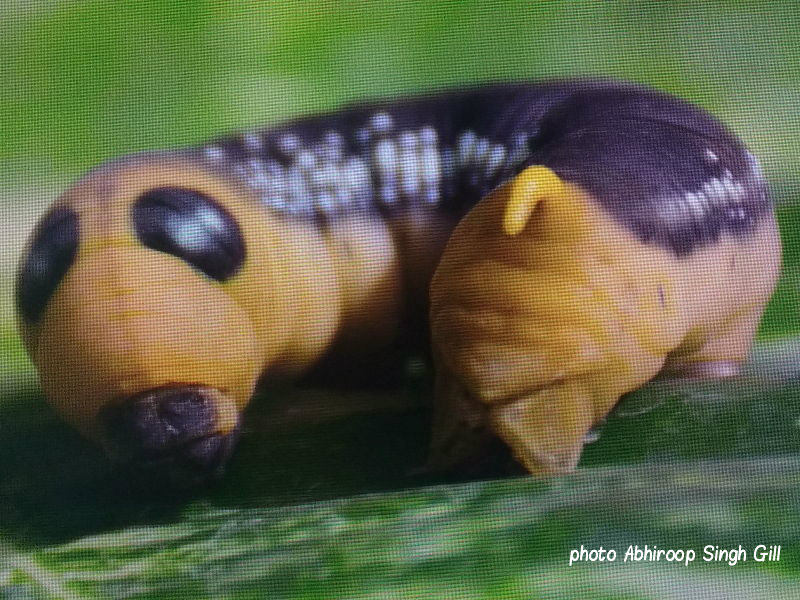