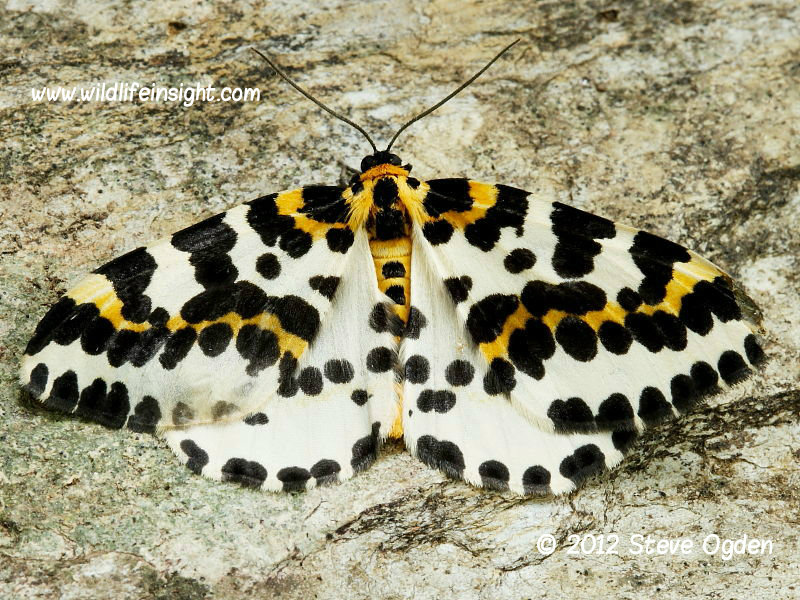 The attractive black and white Magpie Moth is found throughout much of the British Isles but more abundant in the southern half.

It’s commonly found in gardens as well as open countryside and wooded areas.

The species has a wingspan of c 50 mm and flies in a single generation from June – August when it’s attracted to light in small numbers and often disturbed from vegetation during the day. 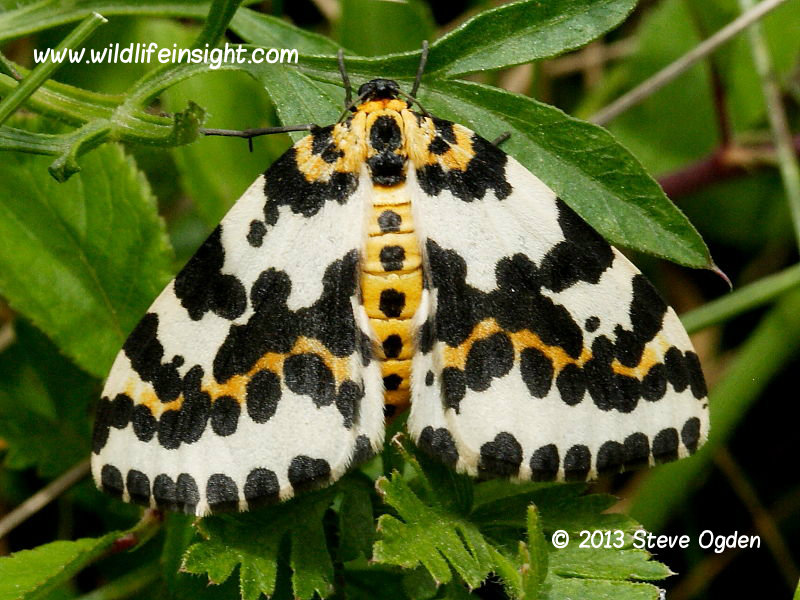 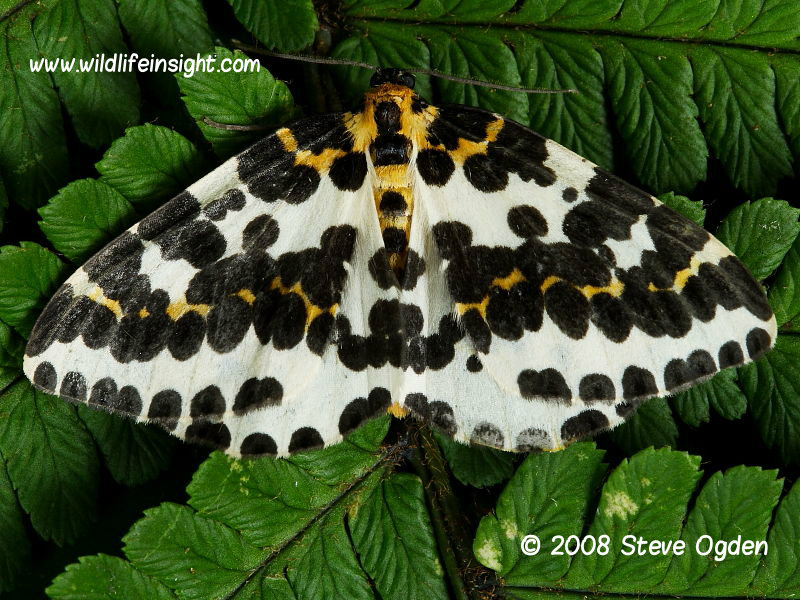 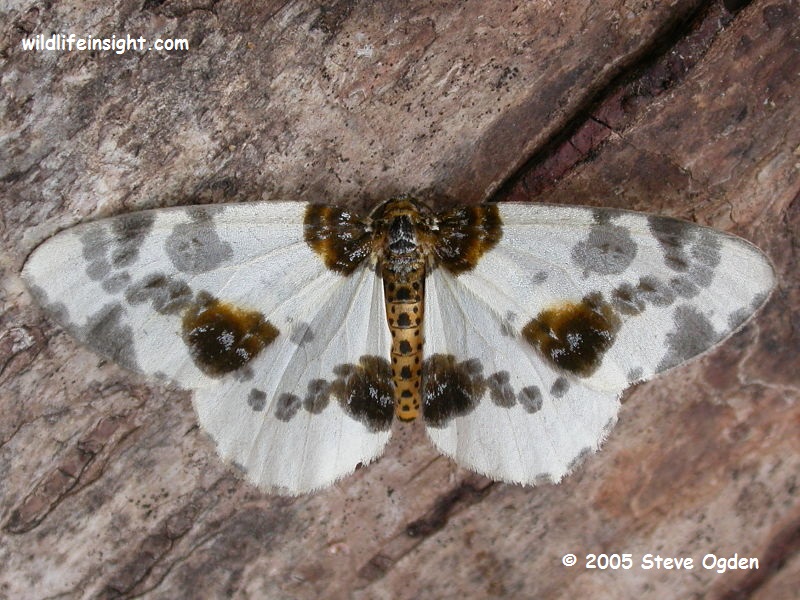 Two other moth species also having black, white and yellow markings are the Clouded Magpie and The Small Magpie.

The Clouded Magpie Moth, Abraxas sylvata is a close relative to The Magpie Moth but more locally distributed. 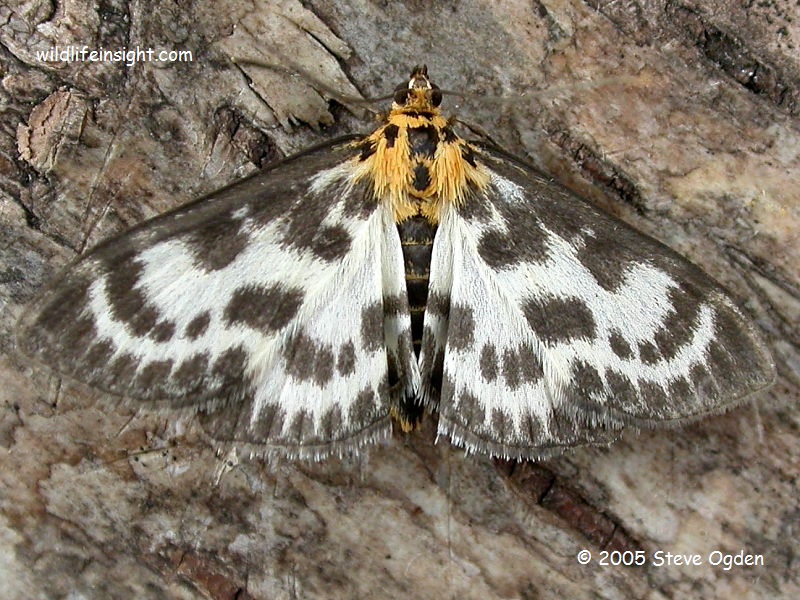 The Small Magpie, Anania hortulata, is smaller and a member of the Pyralidae family of Micro moths.

Other moths can be seen in the Moth galleries and species pages. 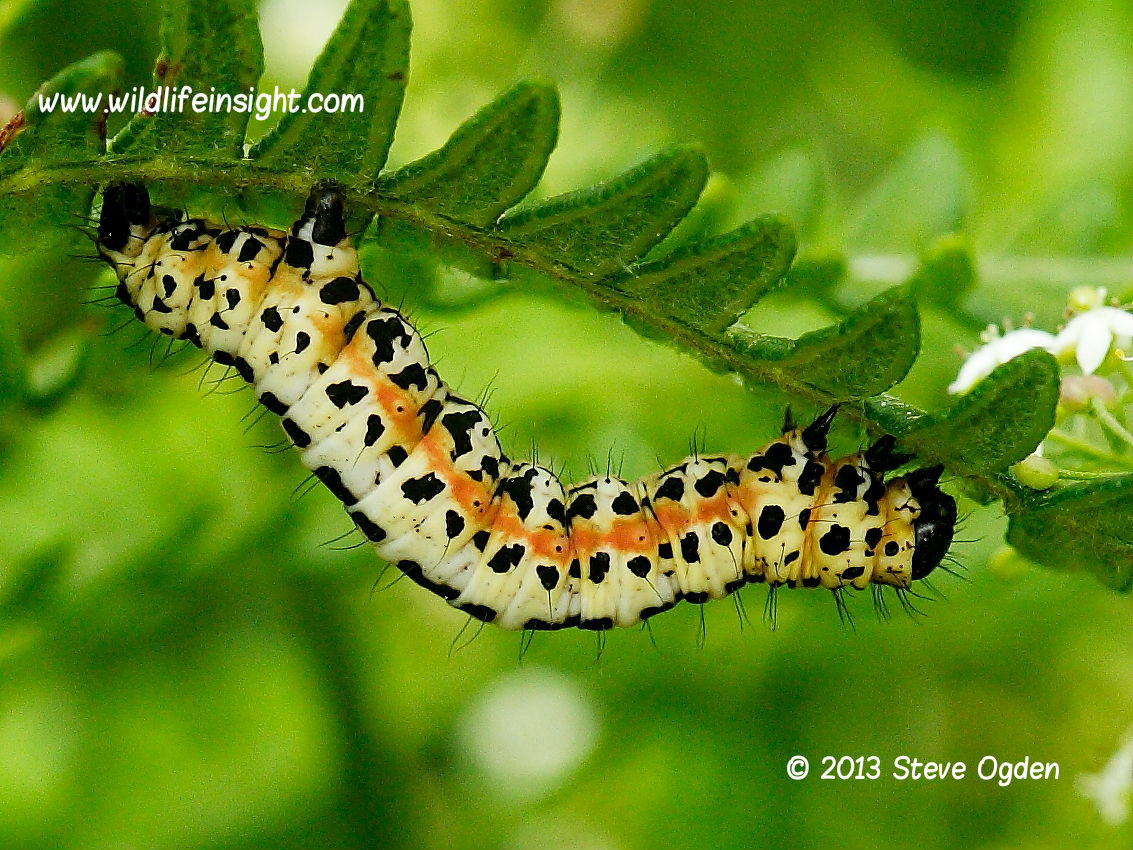 The distinctive Magpie Moth caterpillar is c 30 mm with a creamy white body, rows of black and white spots and an orange spiracular stripe.

Larval foodplants include a wide range of deciduous trees including blackthorn, hawthorn, hazel and spindle.

The caterpillars are also frequently found feeding on current and gooseberry bushes.

These larvae may also be found hanging on silken threads from bushes and trees during the day. 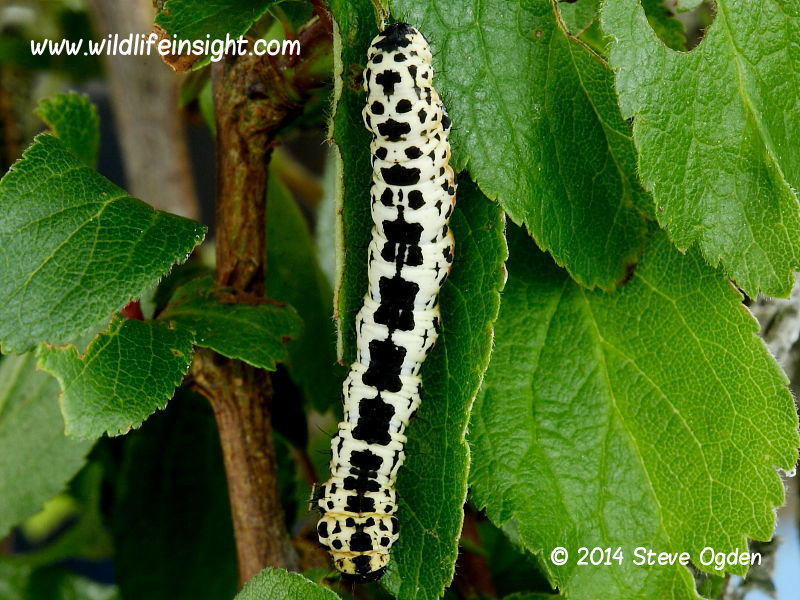 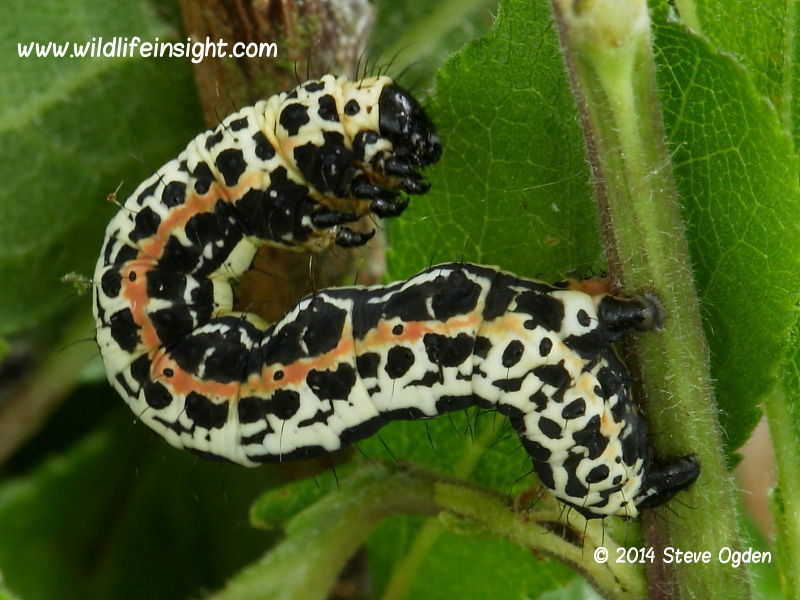 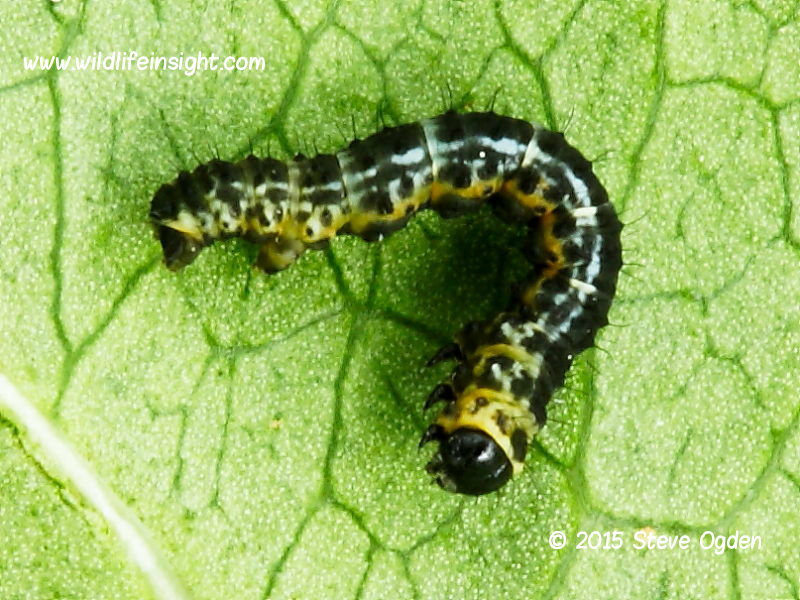 The overwintering 4 mm caterpillar featured was found on spindle in November in South West Cornwall and reared through.

Feeding and growth increased rapidly in April and by mid May the caterpillar was fully grown.

Other species may be seen in the caterpillar galleries – 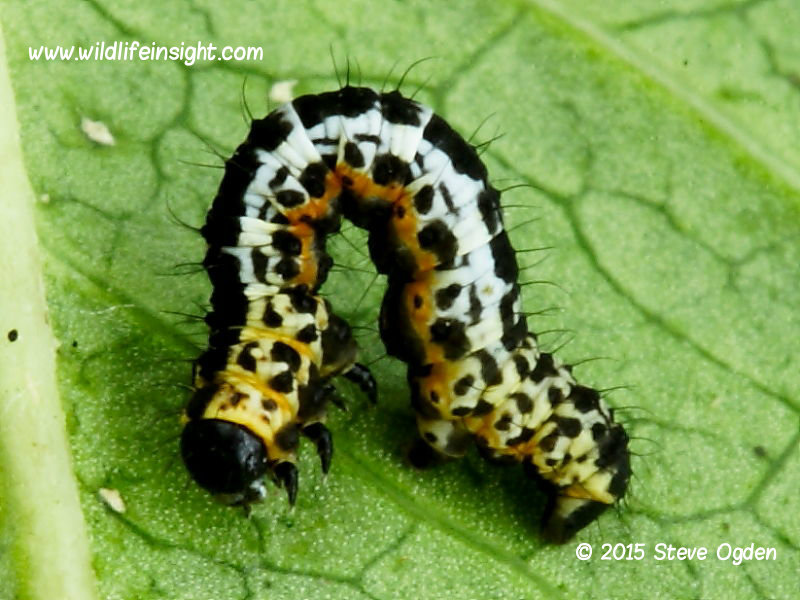 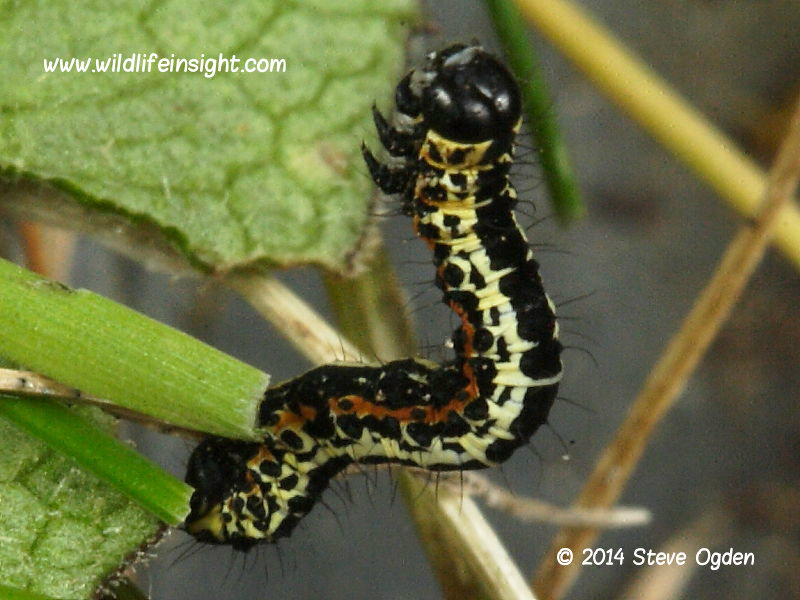 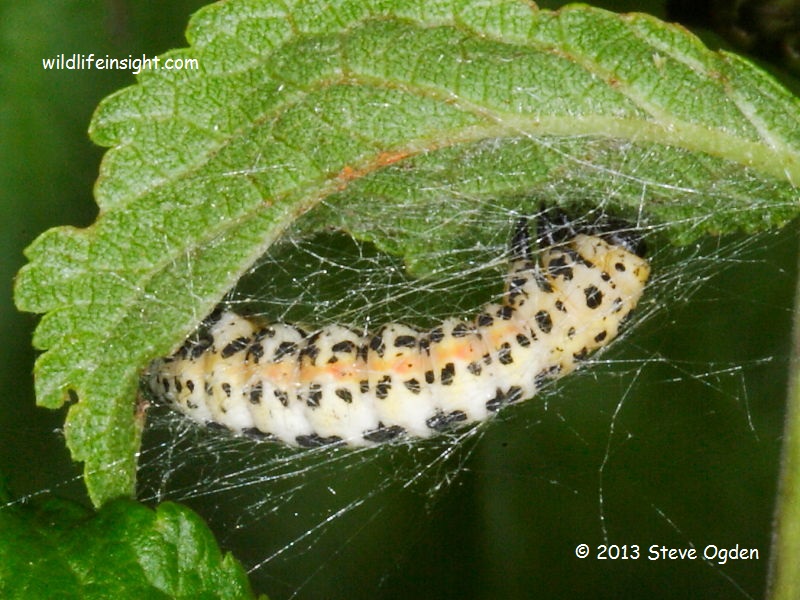 The distinctive black and yellow striped pupa of the Magpie Moth caterpillar is commonly spun up amongst leaves of the foodplant. On occasions, however, the pupae have also been found suspended on silk thread from twigs in hedgerows.

The moths emerge within a month.

The caterpillars are easy to rear.

The Colour Identification Guide to Caterpillars of the British Isles – Jim Porter.
Field Guide to the Moths of Great Britain and Ireland – Waring, Townsend and Lewington.
The Provisional Atlas of UK’s Larger moths -Randle, Fox and Parsons 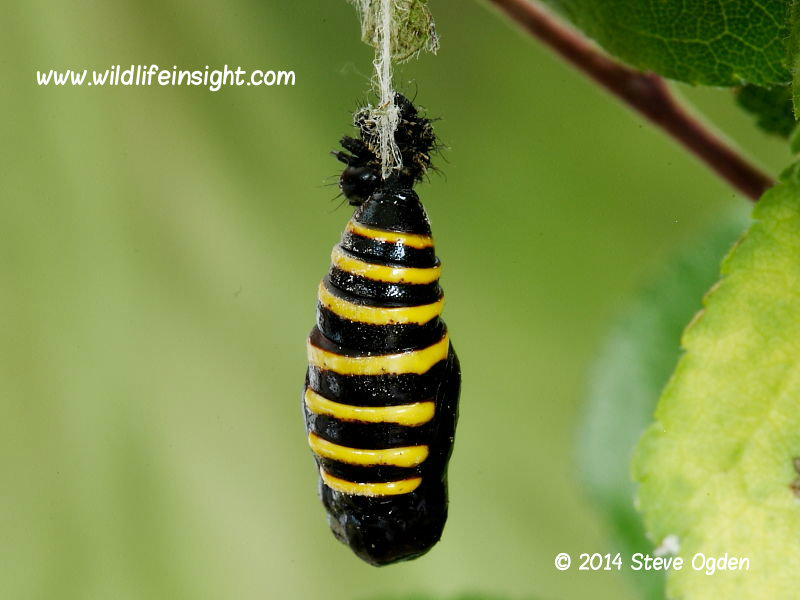 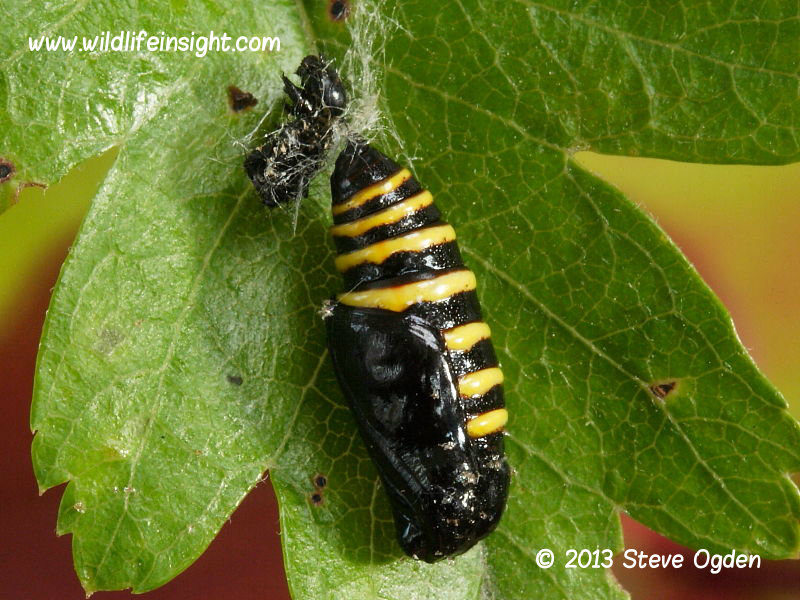