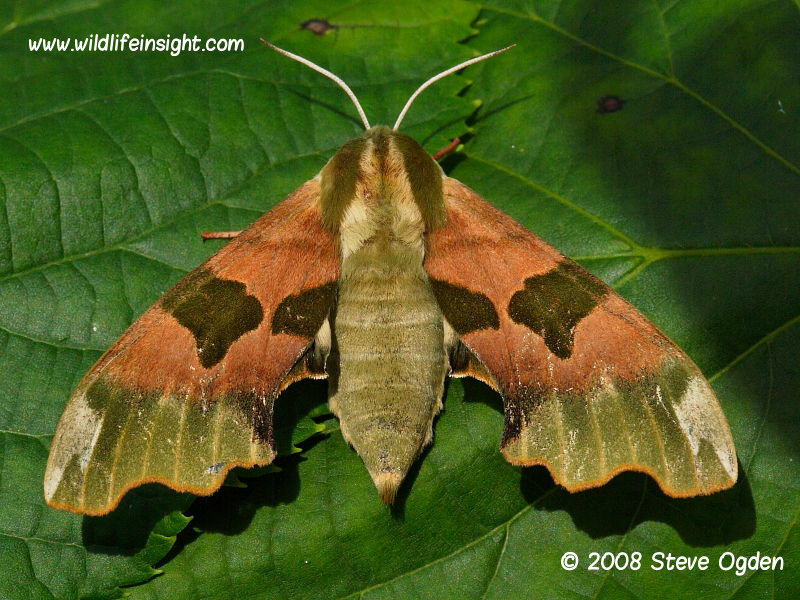 The Lime Hawkmoth, Mimas tiliae, is a member of the large Sphingidae family of Hawkmoths.

It’s found in areas of deciduous woodland throughout much of the southern half of England and Europe.

It has a wingspan of up to approximately 80 mm and flies in a single generation from May to July in northern regions with a second generation in warmer parts of its range.

Despite having variable brown and green ground colouring to the forewings it’s an easily recognisable species.

Females generally having a brown ground colour to the forewing while males tend to be greener. The central, irregular shaped, dark bar is commonly broken but may be complete or occasionally absent. 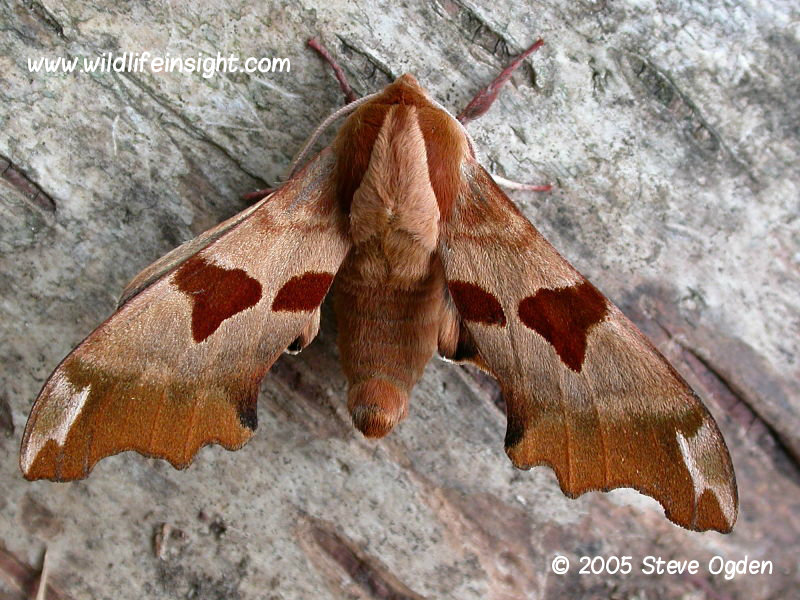 Both males and females are attracted to light.

The normally browner females can be reliably identified by their swollen and straighter abdomen when compared to the slimmer and upward curving abdomen of the males.

Photographs of the Lime Hawkmoths shown are of different coloured forms attracted to light in south west England.

More Hawkmoth information and sightings from around the world can be seen in the Hawkmoth galleries, species pages
and British caterpillar gallery. 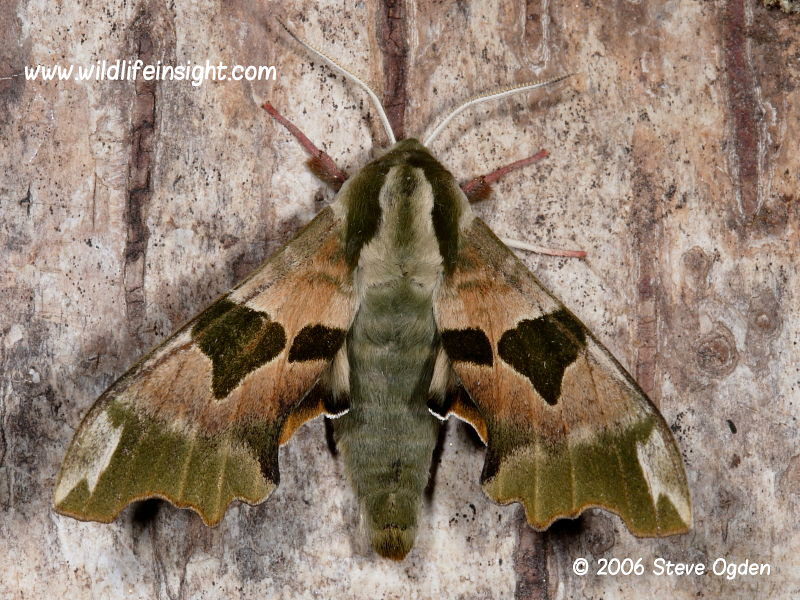 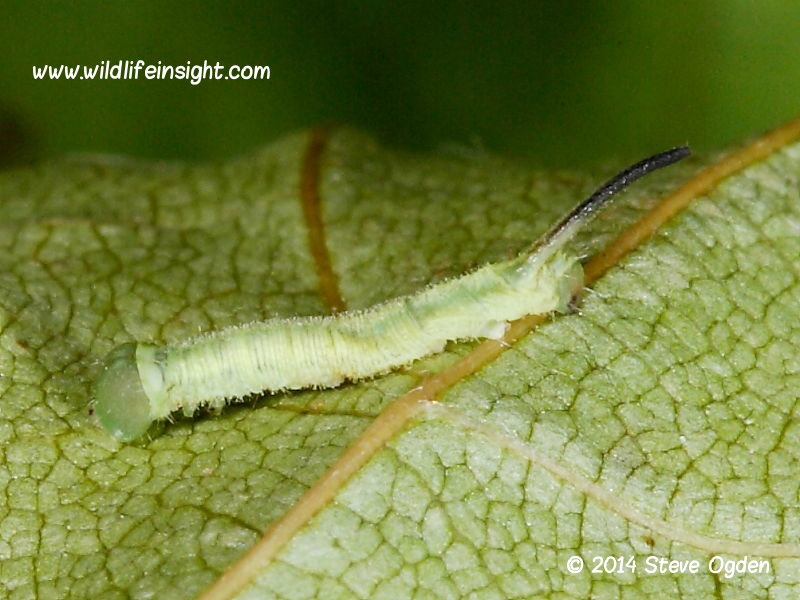 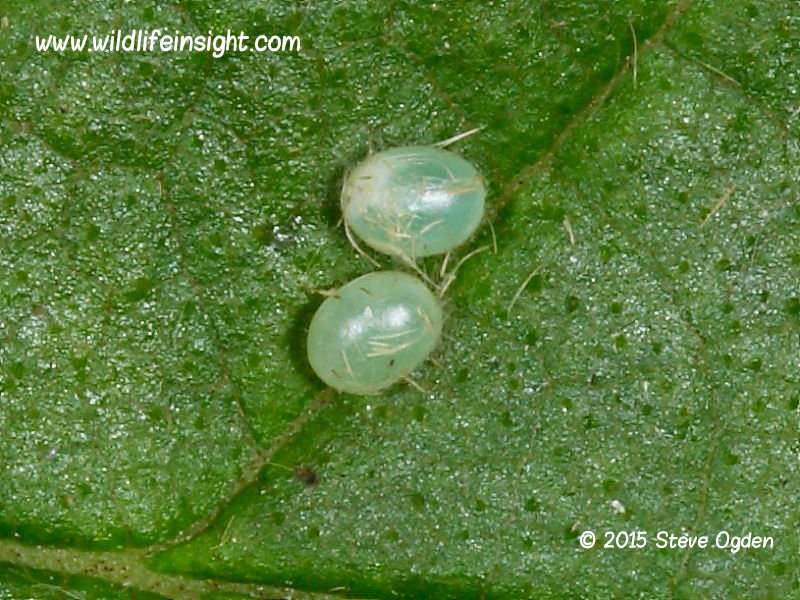 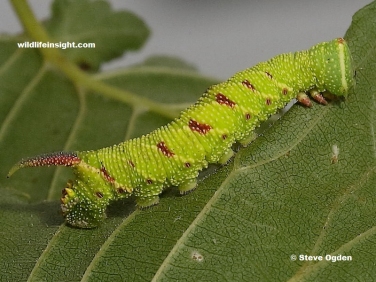 Females attracted to light readily lay eggs and the hatching larvae are easily reared through.

Eggs hatch within 7-10 days depending on temperature.

The caterpillars can be found throughout the summer and into September.

The fully grown caterpillars pupate in the soil and overwinter as a pupa.

Emergence occurs in May. 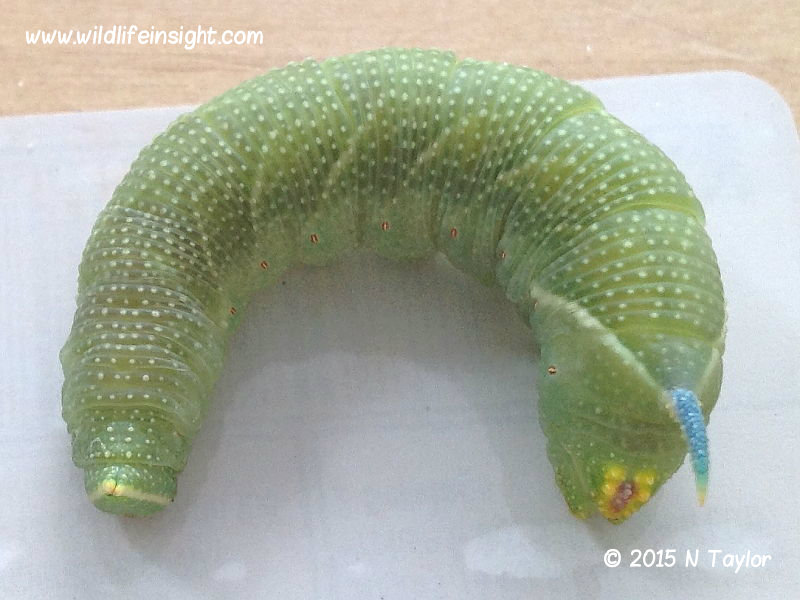 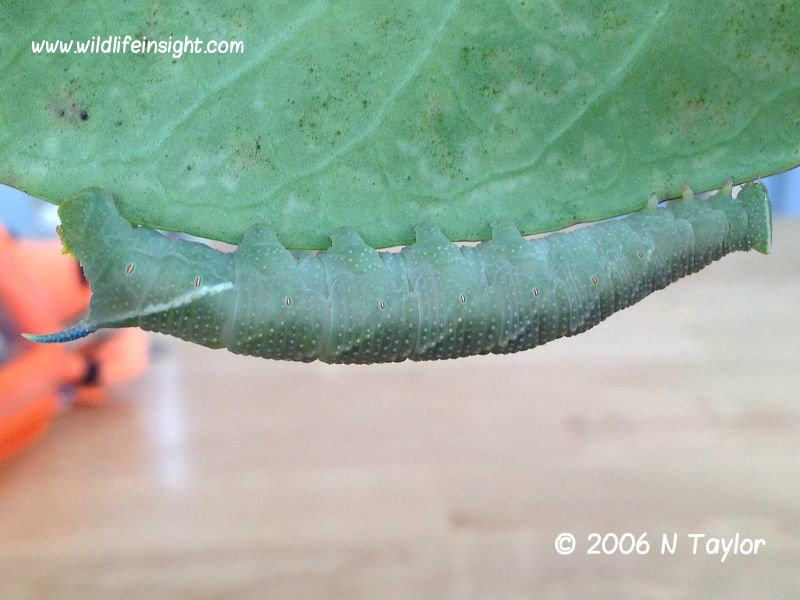 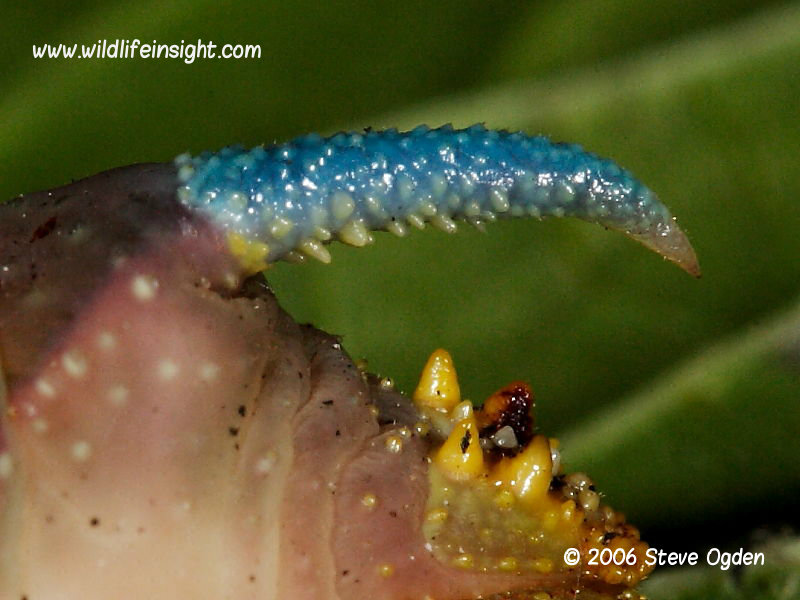 Notable features of the caterpillar are the curved blue tail horn with hints of red and yellow on the underside.

Beneath the tail horn is a small cluster of raised yellowy orange tubercles. 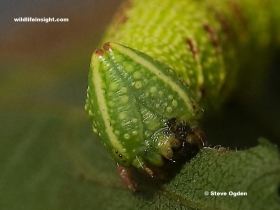 The head is triangular with pale yellow borders. 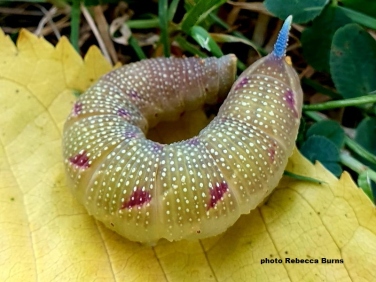 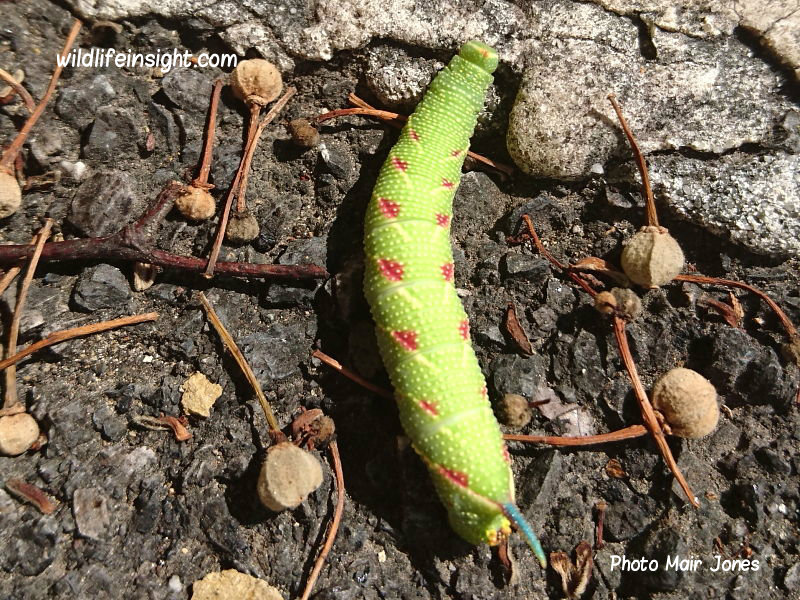 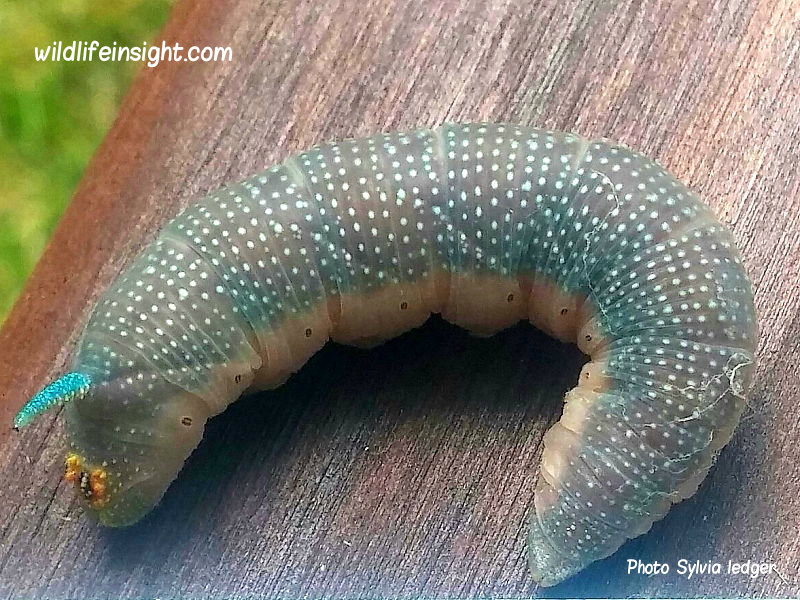 The prepupating caterpillars are brownish grey, sprinkled with white tubercles.

The pupae may be found buried just below the surface of the soil beneath trees of the larval foodplant.

The pupae overwinter with the adult Hawkmoth emerging in May. 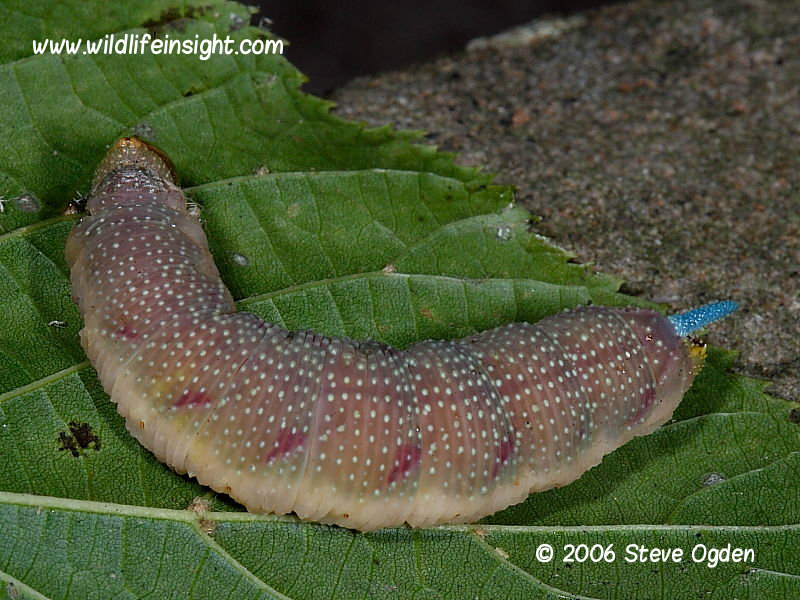 Other commonly sighted Hawkmoth caterpillars in the British Isles include the Elephant Hawkmoth, Privet Hawkmoth, Eyed Hawkmoth and Poplar Hawkmoth.

Other Hawkmoths that occur in the British Isles as migrants but are common in parts of Southern Europe, The Middle East and Africa are –
The Death’s Head Hawkmoth, Convolvulus Hawkmoths, The Hummingbird Hawkmoth, Striped Hawkmoth and Oleander Hawkmoth.

Photographs and sightings of caterpillars, moths and butterflies from around the world are appreciated and will be added to the site with accreditation. The copyright of photographs remains with the photographer.