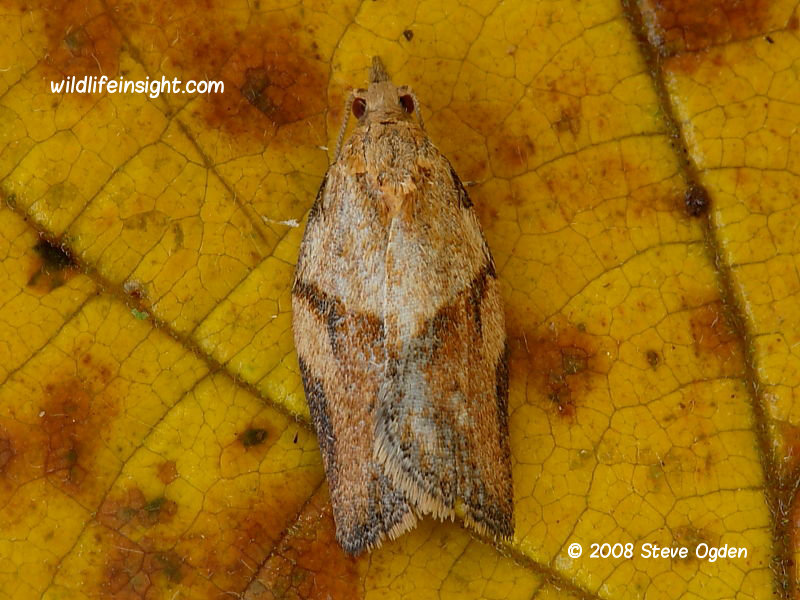 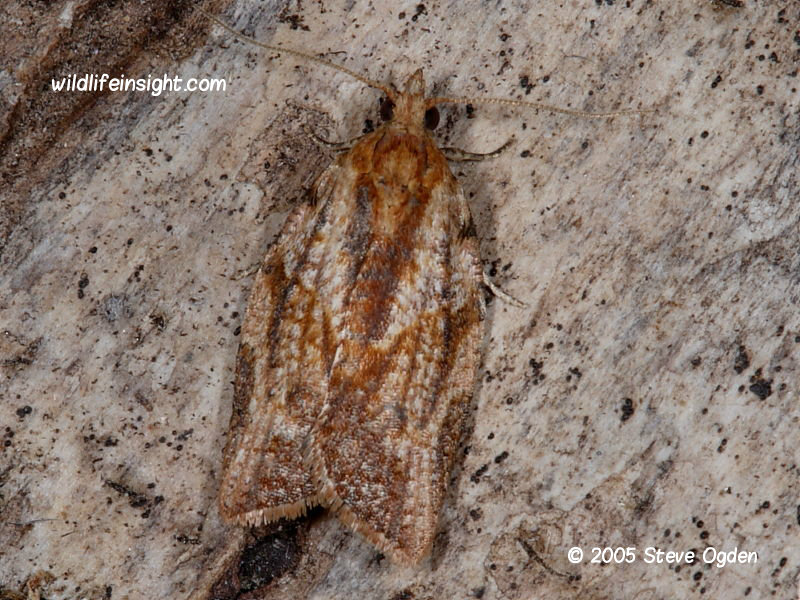 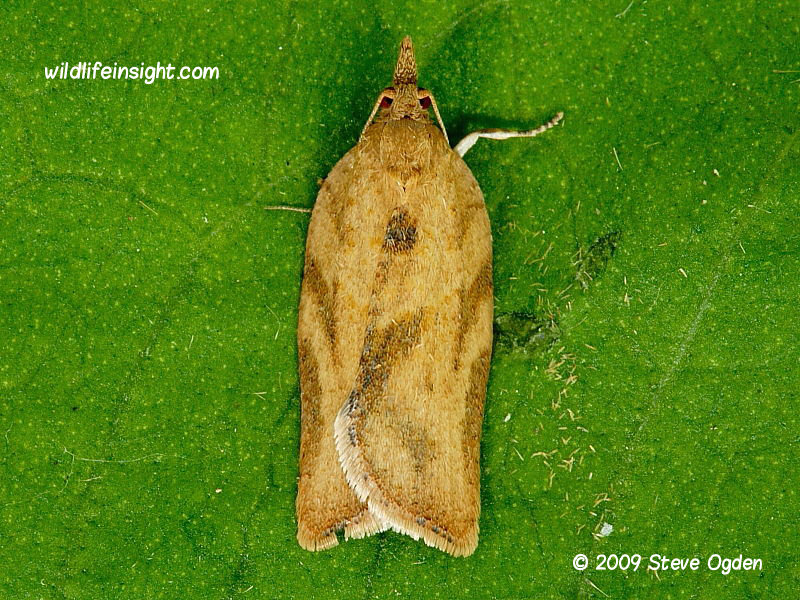 The Light Brown Apple Moth, Epiphyas postvittana, is a member the tortricidae family of micro moths commonly know as tortrix.

It’s an Australian species that in recent years has spread its range to many other parts of the world including parts of Europe and the US.

In the British Isles it was first recorded in Cornwall in the 1930s when it was thought likely to have been accidentally imported from Australia. 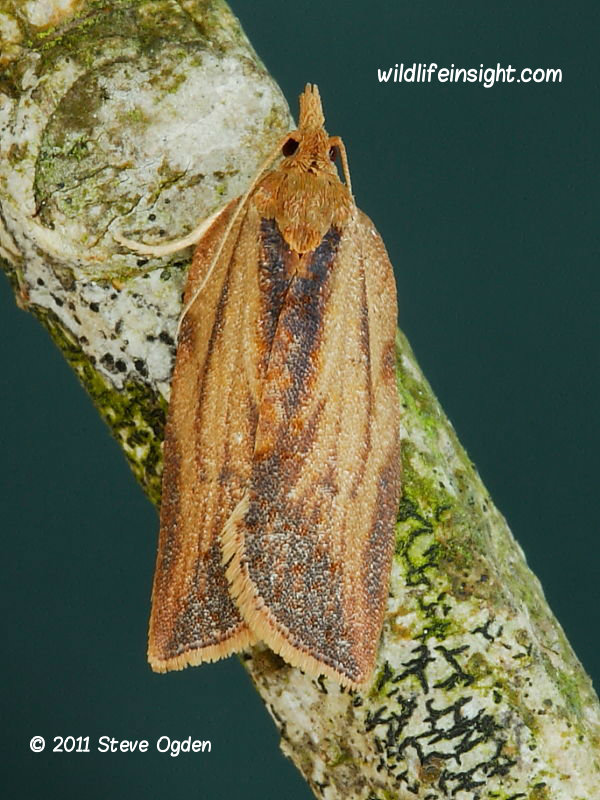 Since then it has spread rapidly and is now a common species in the southern half of the British Isles.

In the mild south west of Cornwall the larvae of the Light Brown Apple Moth can now be found throughout the year, although their development is slow during the colder months.

The photographs featured are of adult moths, caterpillars and pupa recorded in various locations in south west England.

Its common name, The Light Brown Apple Moth, is reference to the damage caused by the caterpillars to fruit trees in Australia.

The caterpillars are polyphagous and have now become pests of a wide variety of horticultural plants, fruits, deciduous trees and garden shrubs in many parts of the world

Indications of the caterpillars presence are leaf rolls and leaves wrapped together, often near buds, flowers and fruit.

As well as feeding on the fruit and leaves their droppings and larval spinnings can also damage commercial crops.

Gardeners frequently find the leaf rolls on a wide variety of plants including roses.

The Light Brown Apple Moth is extremely variable in both size and colour.

Its wingspan ranges between 16mm to 26mm with the females considerably larger than the males.

The wings are of variable patterns and shades of brown.

The main flight period is between May and October and at least double brooded in the south of the British Isles.

The moths are frequently disturbed during the day and attracted to light at night. 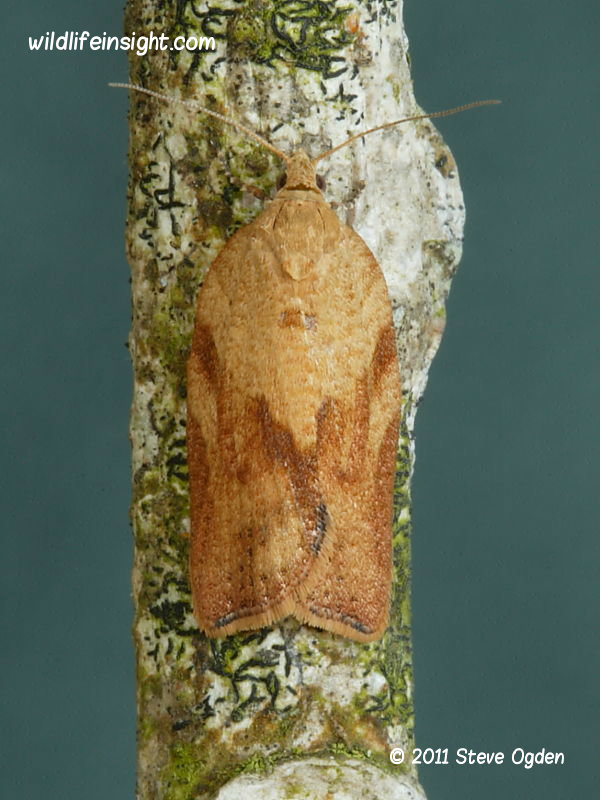 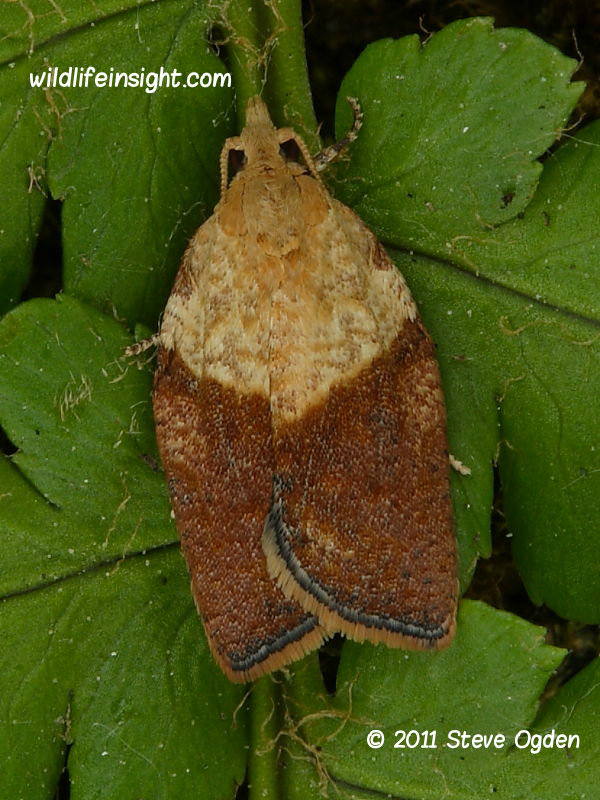 The females lay eggs in pale, greeny yellow clusters of up to 150 or more on the upperside of the larval foodplants leaves

As with many other members of the Tortricidae family the caterpillars (larvae) of the Light Brown Apple Moth are often referred to as leaf rollers due to their habit of constructing a shelter by rolling up a leaf of the foodplant.

As they grow larger two leaves are bound together by a light spinning.

Fully grown larvae pupate within the leaf roll and emerge within 30 days depending on temperature. 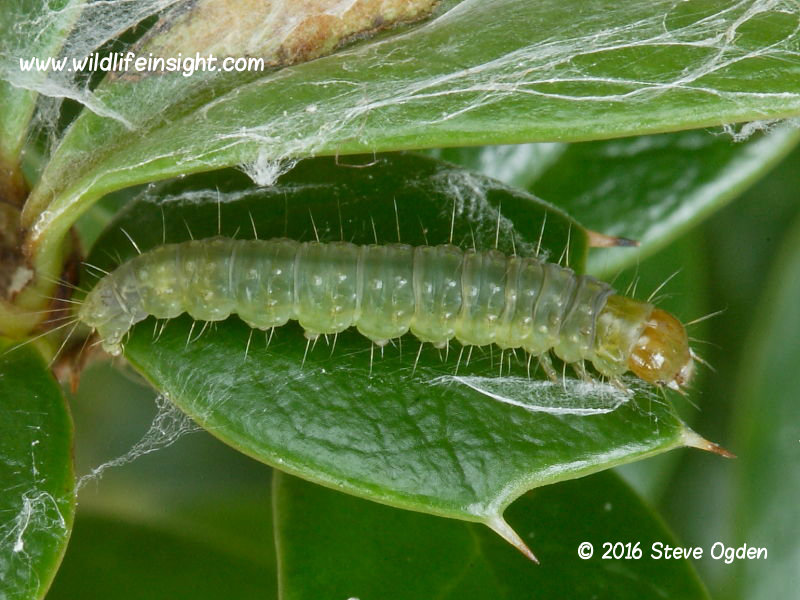 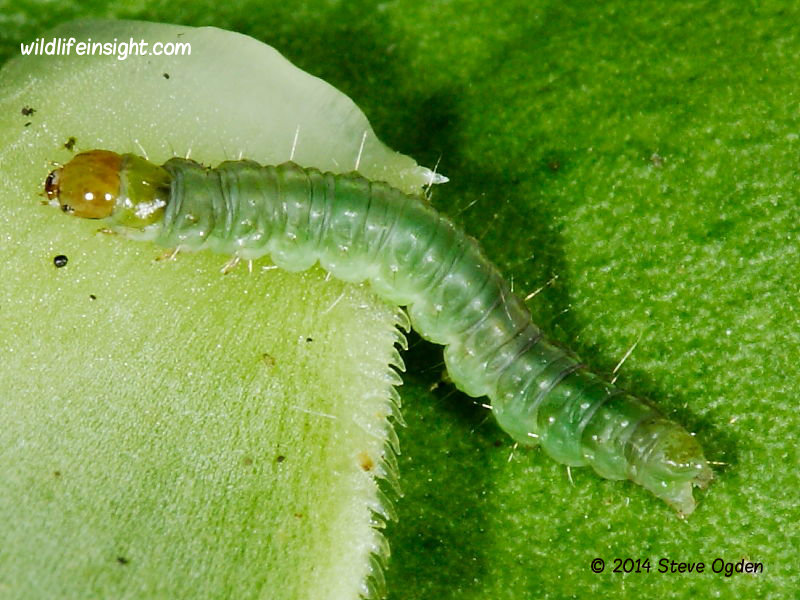 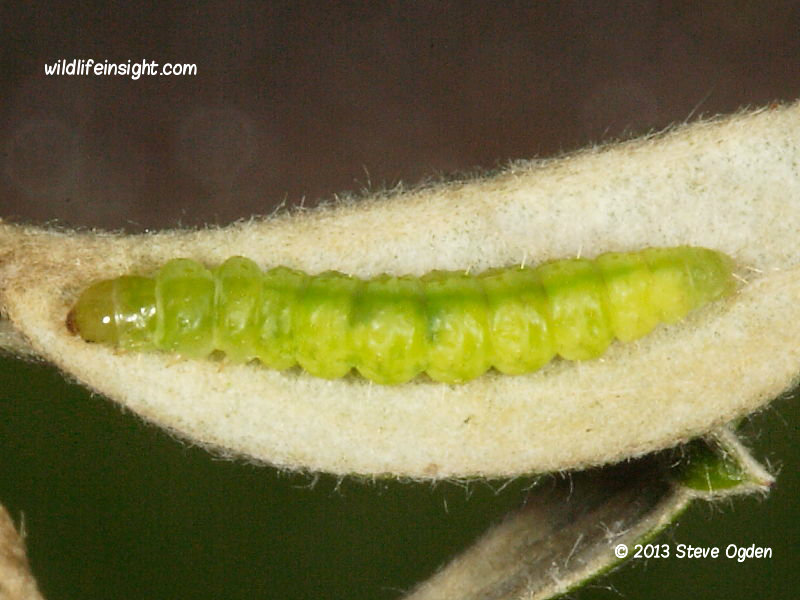 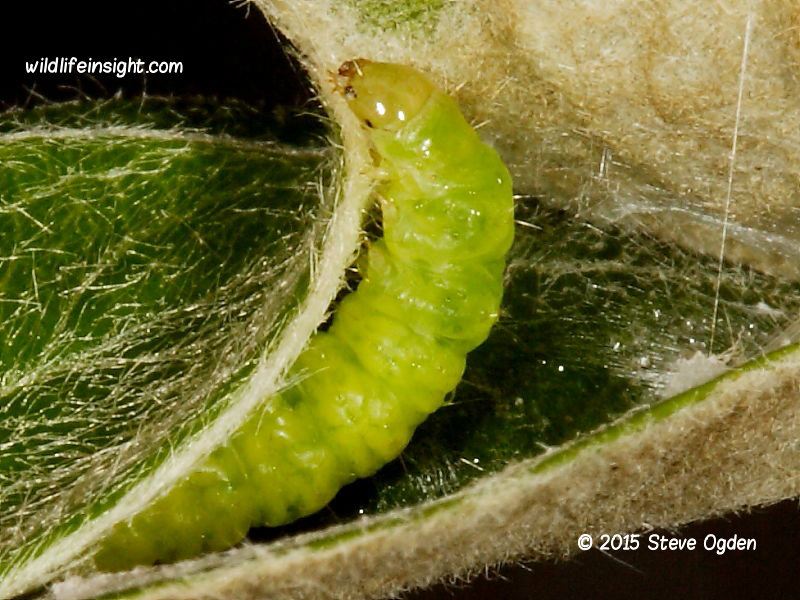 Much of the feeding takes place within leaf wraps and folds which may be attached to buds, leaves, flowers and fruit. The larvae also enter fruit via the calyx and feed internally.

The fully grown light green/yellowish caterpillars are about 20 mm in length and can easily be mistaken for several other species of leaf rolling tortrix caterpillars.

There are 3 pairs of true legs at the front, 4 pairs of prolegs on lower sections of the abdomen and a rear clasper.

The head is a pale greeny/brown.

Other caterpillars can be seen in the species pages and – 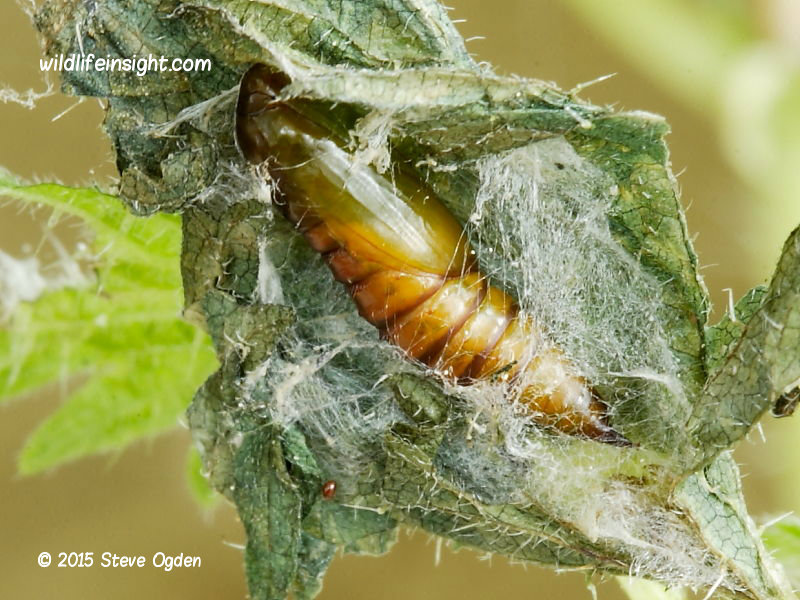 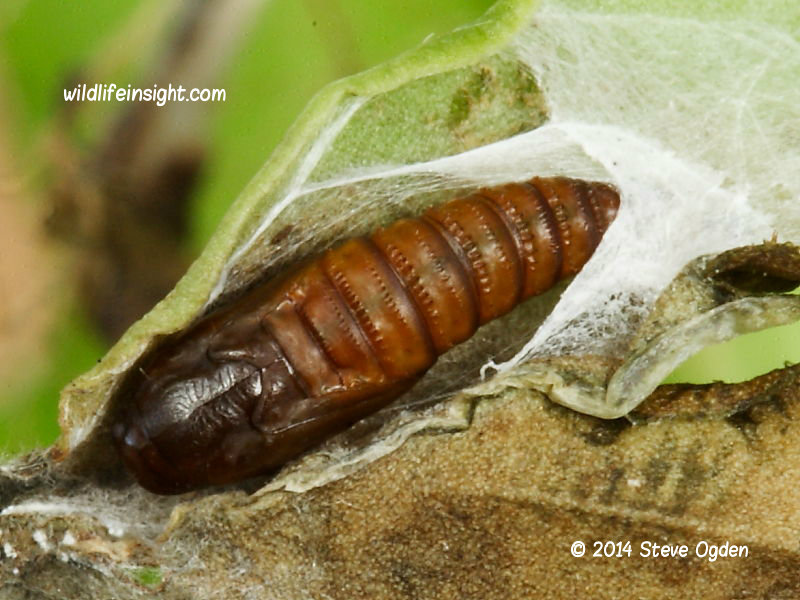 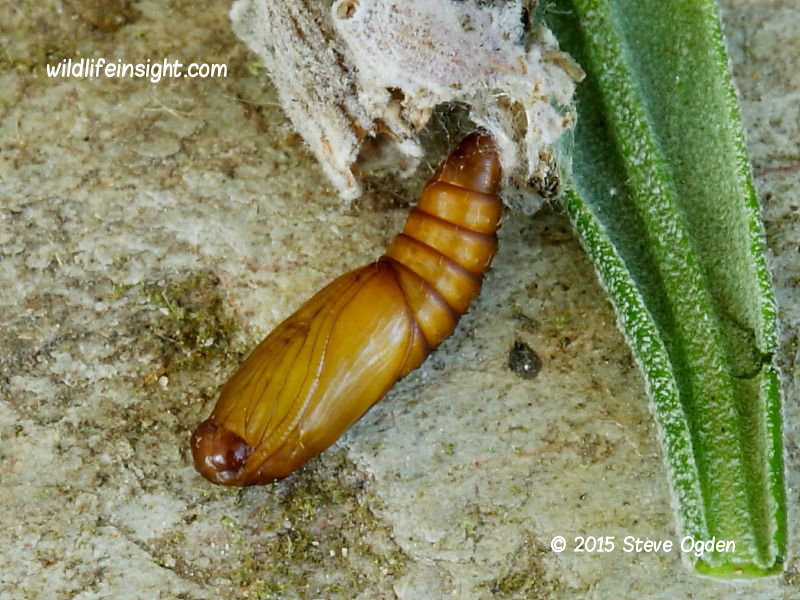 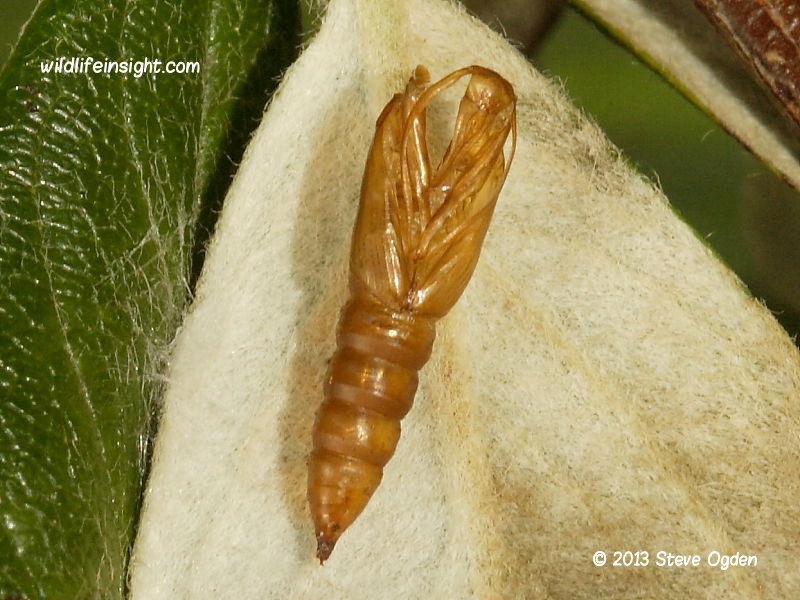 Recommended reference books – The most comprehensive Field Guide to the micro moths of Great Britain and Ireland.