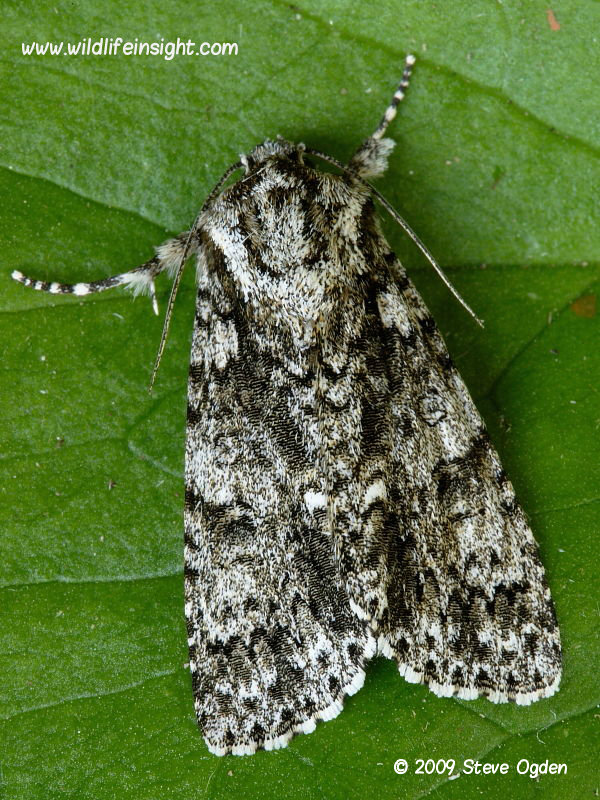 The Knot Grass moth is a common species throughout most of the British Isles ranging from the extreme south west tip of Cornwall to the Shetland Isles in the far north.

It occurs in a wide variety of habitats including gardens, open countryside and lightly wooded areas.

In the milder south the Knot Grass moth flies in two generations in May and June and again from August to September when it is regularly attracted to light.

The black, white and red caterpillars (larvae) feed on a wide variety of herbaceous and are commonly seen during the day.

More information on the Knot Grass caterpillar and their different coloured forms can be seen below.

Further information on other moth caterpillars can be seen in the 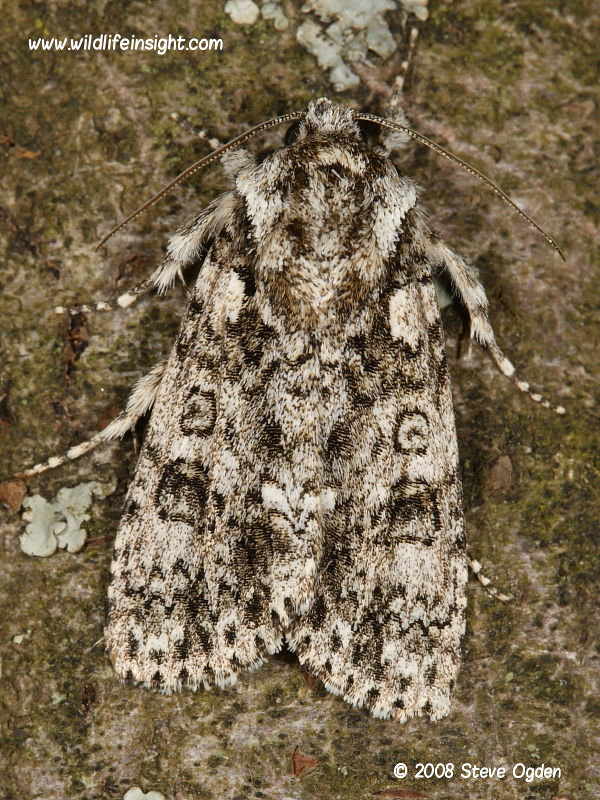 The moth has a forewing length of about 17 mm.

Although quite similar to several other noctuid moths the small white spots in the middle of the trailing edge of the forewing form a distinctive central mark when at rest – best seen in the darker specimen above left.

Other commonly found ‘Dagger’ species (Acronictinae) in the British Isles and many parts of Europe include The Dark Dagger, The Grey Dagger, The Alder Moth, The Sycamore, The Poplar Grey, The Miller and The Coronet. 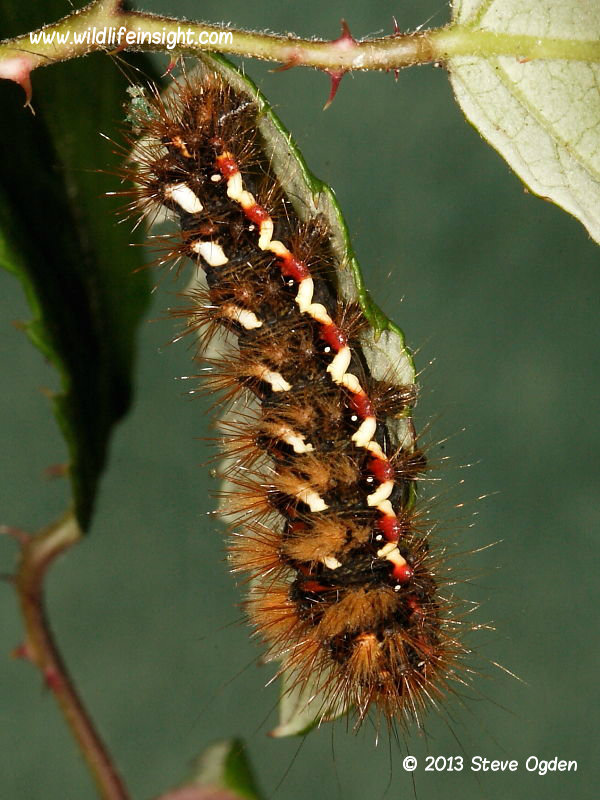 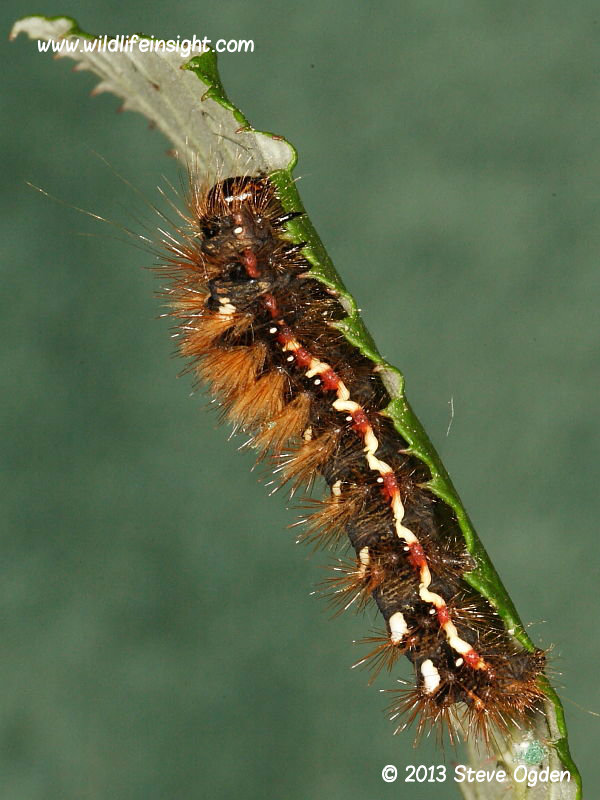 The Life cicle of the Knot Grass moth, Acronicta rumicis

Eggs are laid in clusters on a variety of herbaceous plants which normally hatch within 5-10 days.

The distinctly marked caterpillars (larvae) feed on a wide variety of herbaceous and are commonly seen during the day.

The caterpillars are fully grown within thirty days when they are often seen during the day on the larval food plants.

The prepupating caterpillars pupate and overwinter in a cocoon spun amongst plant and leaf litter.

The first moths emerge in early May. 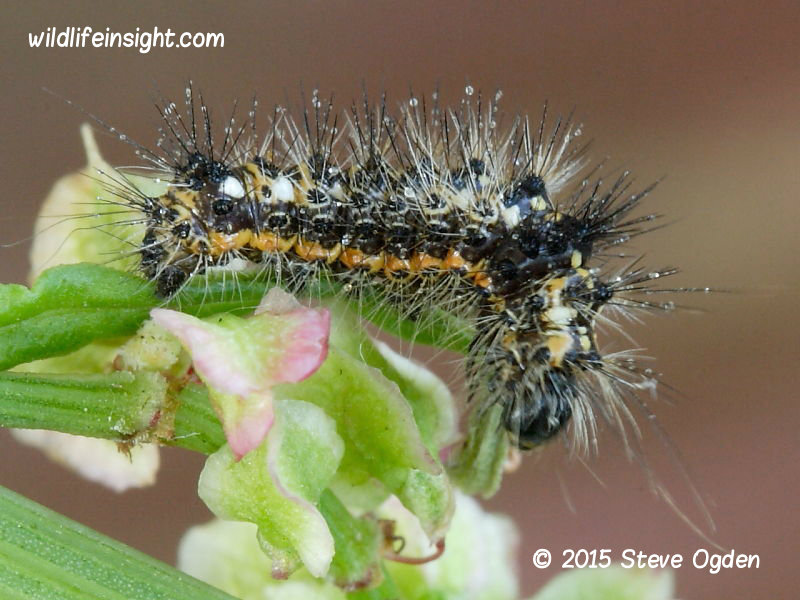 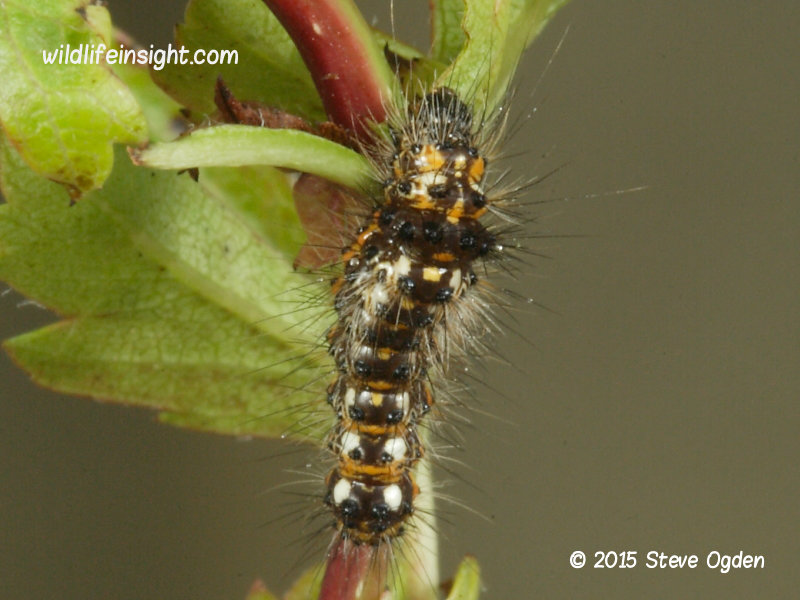 The caterpillars grow up to 40 mm in length.

The body can vary in colour between a light gingery brown to almost black with clumps of rusty brown pinacular hair.

The broken line of white sub dorsal patches and the wavy white sub spiracular line with reddy/orange spots are distinctive.

The Brown-tail caterpillar, which has particularly urticating brown hairs, is sometimes confused with the Knot Grass caterpillar. 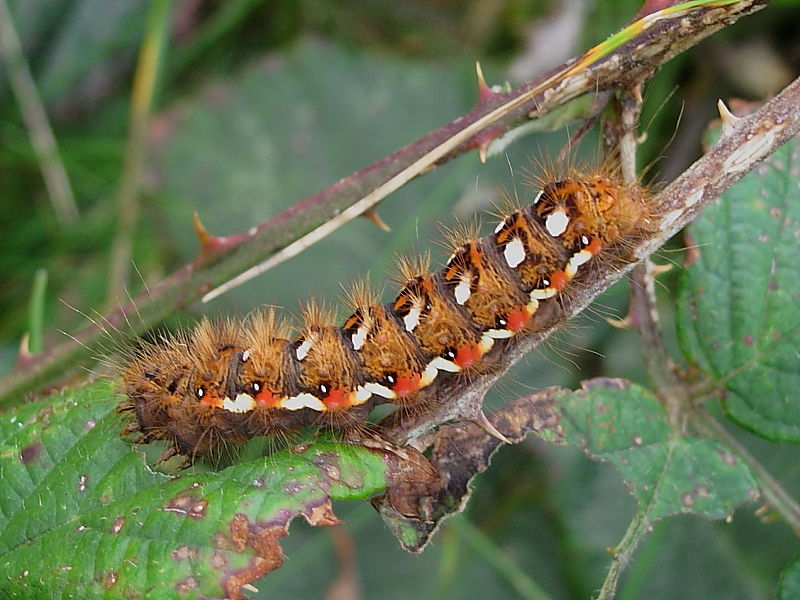 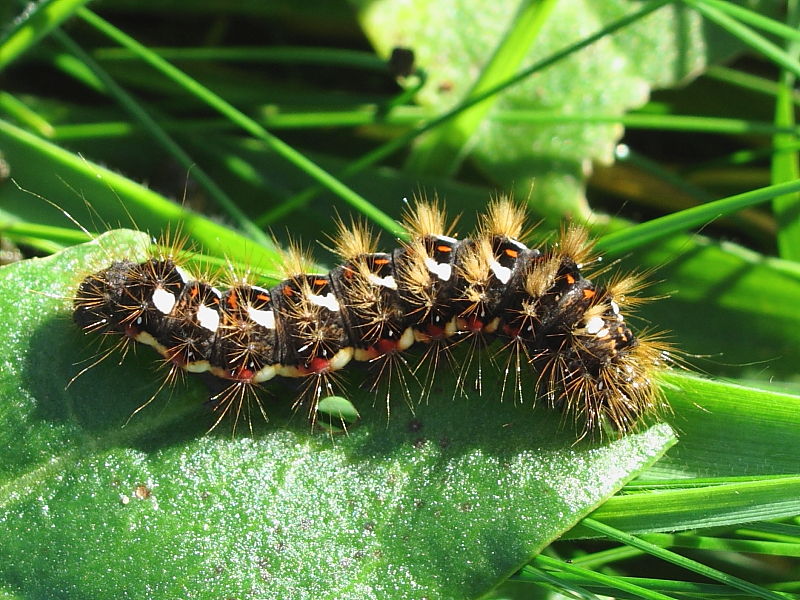 The caterpillars feed on a wide variety of low herbaceous plants including plantain, dock and knotgrass, as well as bramble, sallows and hawthorn.

They are frequently found in damp areas on the edge of streams and ponds where they can also be found on water mint and sorrel. 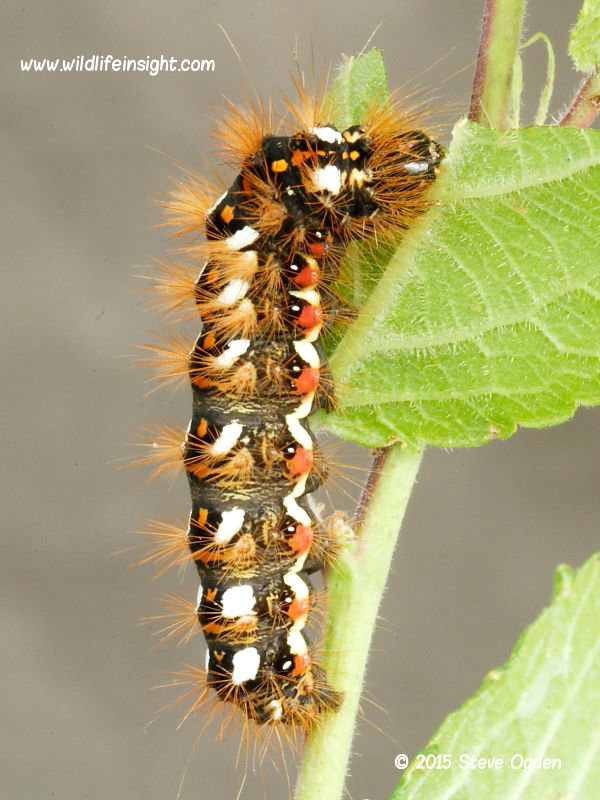 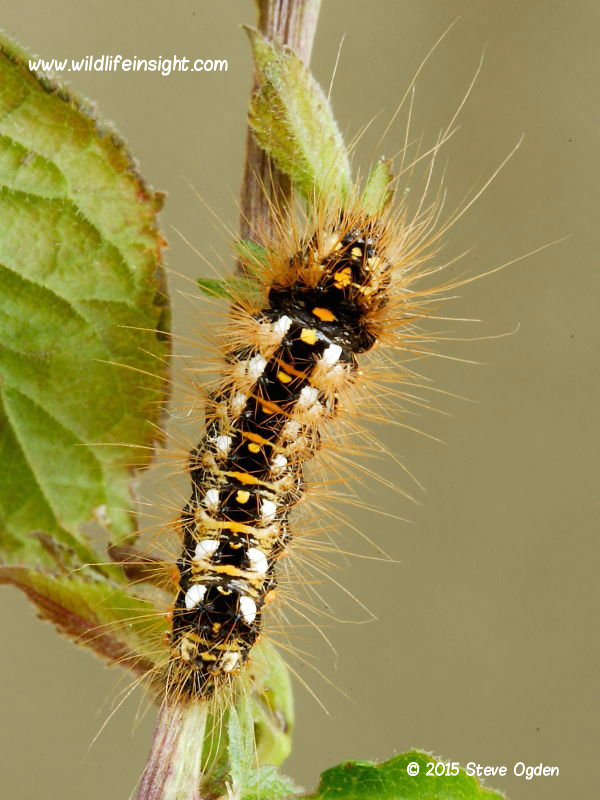 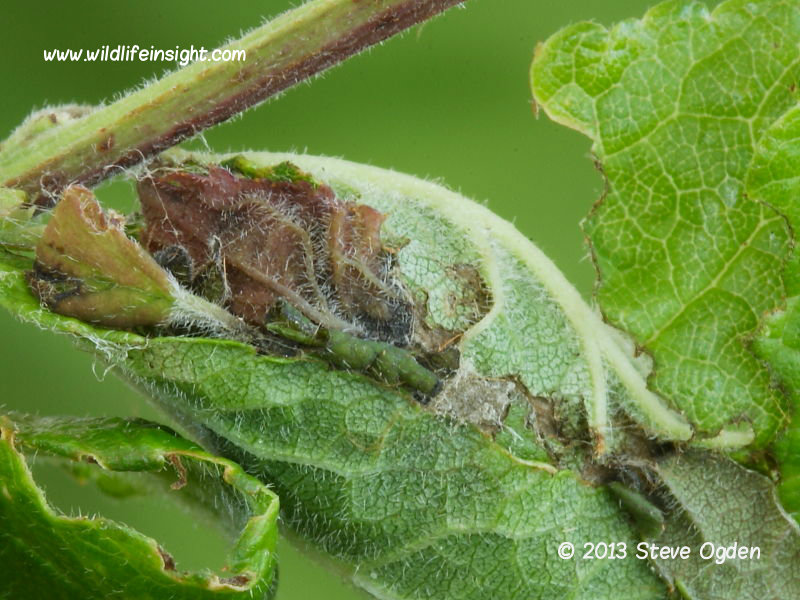 The cocoon of The Knot Grass caterpillar

When fully grown the caterpillars pupate and overwinter in a cocoon spun amongst plant and leaf litter.

Female moths attracted to light lay freely in captivity and the caterpillars are easy to rear requiring no special requirements.

The caterpillars are easiest to find when fully grown and pupate readily on leaf plant and leaf litter.

Early instars can be swept from low growing herbaceous plants. 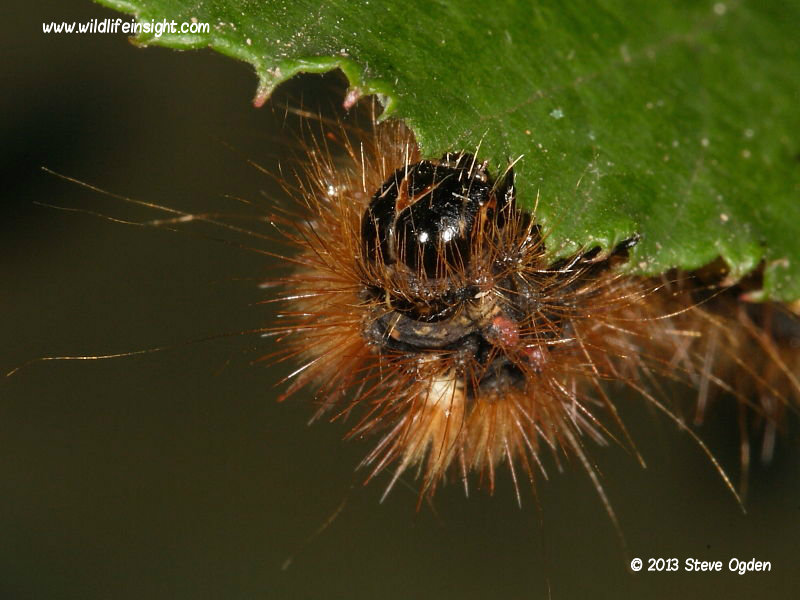 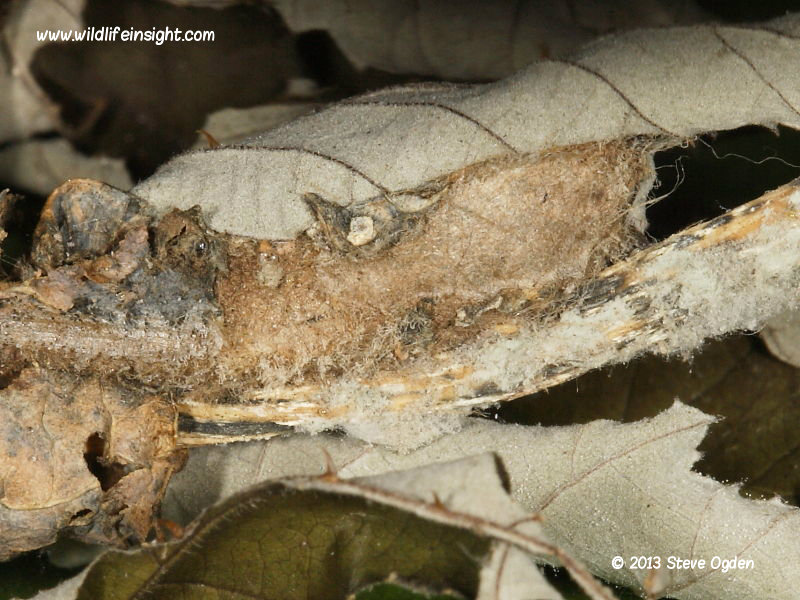 The Knot Grass larvae are susceptible to being parasitised by species of Cotesia wasps belonging to family Braconidae.

The featured Knot Grass larva corpse was recorded on a grass stem at the base of cliffs near Cape Cornwall on the Cornish North coast.

Several wasps were seen emerging from the silken web housing their pupae.