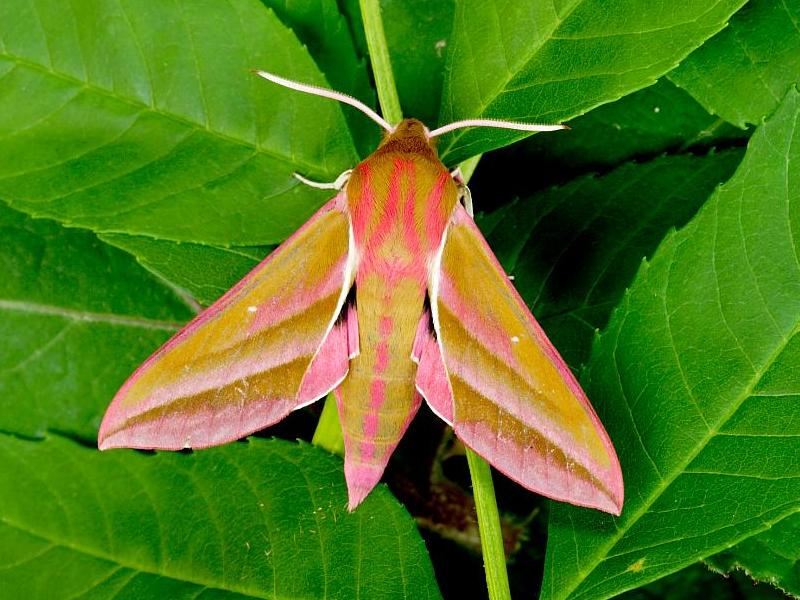 The Elephant Hawk-moth (Deilephila elpenor)- is one of the commonest hawk-moths in the British Isles, widely distributed throughout much of England, Wales, Northern Ireland and parts of Scotland.

It is found in a wide range of habitats including open countryside, on the edge of woodlands and in urban gardens.

It flies mainly in a single generation between June and September but with an occasional small second generation recorded in the south.

It is one of the most frequently attracted Hawk-moths to light.

Identification of the Elephant Hawk-moth 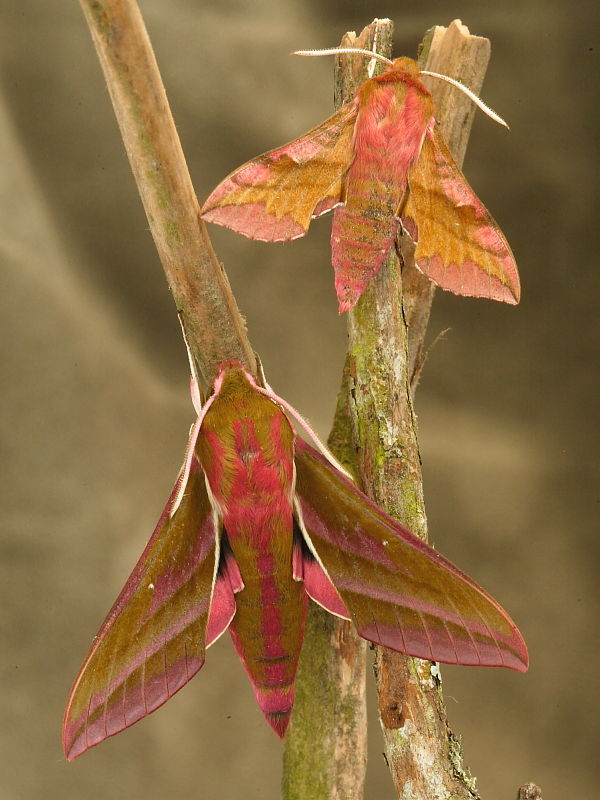 The Elephant Hawk-moth is one of the most colourful and instantly recognisable moths in the British Isles.

It has a forewing length of about 30mm.

Only the smaller Small Elephant Hawk-moth shares the eye catching shades of pink, green and browns – although there are distinct differences in the shape and order of colour banding.

The two species are not so frequently seen together in garden light traps due to the Small Elephant Hawk-moths preference for more open countryside.

Other common Hawkmoths are The Privet Hawkmoth,

The Eyed Hawkmoth, The Poplar Hawkmoth and The Lime Hawkmoth. 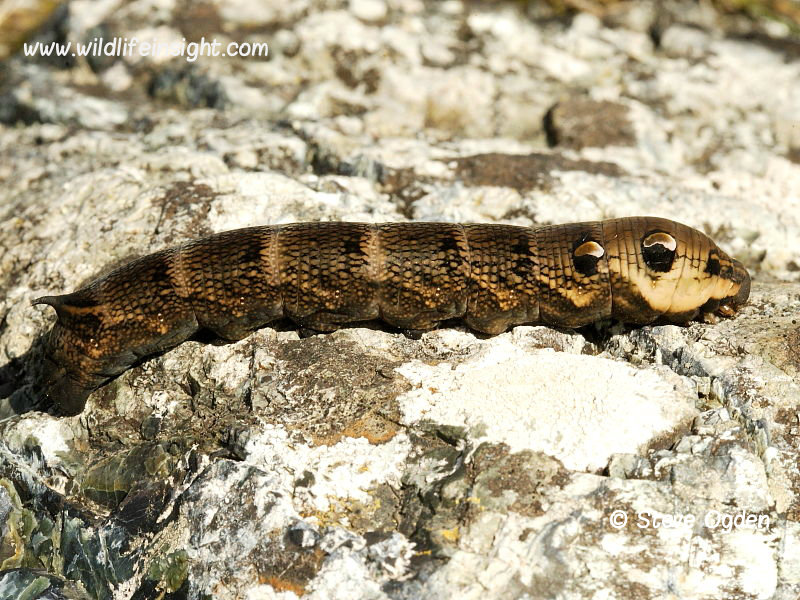 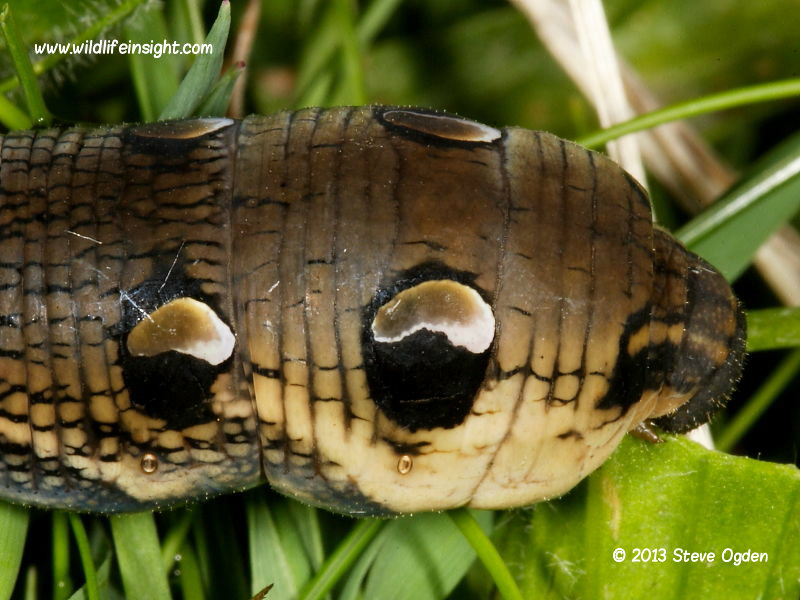 The Elephant Hawk-moth caterpillar grows to 85mm in length and is one of the largest and most distinctive caterpillars to be found in the British Isles.

It is also the most frequently seen hawk-moth caterpillar, often found feeding and wandering in search for somewhere to pupate in gardens.

The species is named after the caterpillars resemblance to an elephants trunk.

When retracted the caterpillars head recoils giving the impression of a much larger head. The two large ‘eye-like’ markings behind the head also suggest a much larger animal, appearing startling to predators.

Life-cycle of the Elephant Hawk-moth

The nocturnal adult moth flies mostly in a single generation at night between May and July when it is attracted to light.

Occasional small second generations have been recorded in the southern counties of the UK. 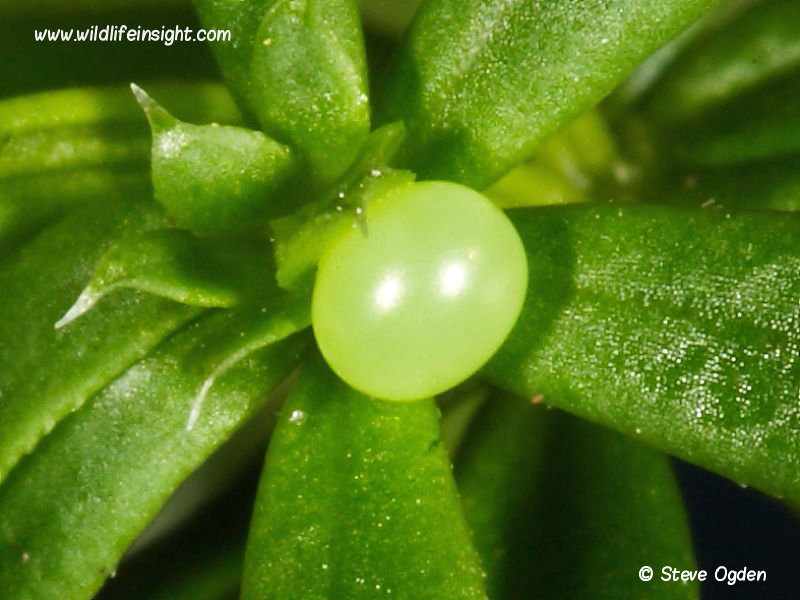 The females lay eggs singly on the leaves of the caterpillars food plants of rosebay willowherb and bedstraws.

In gardens they are frequently recorded on garden fuchsias but have also been found feeding on other garden plants such as dahlias and lavender.

The eggs hatch within 7-10 days depending on temperature. 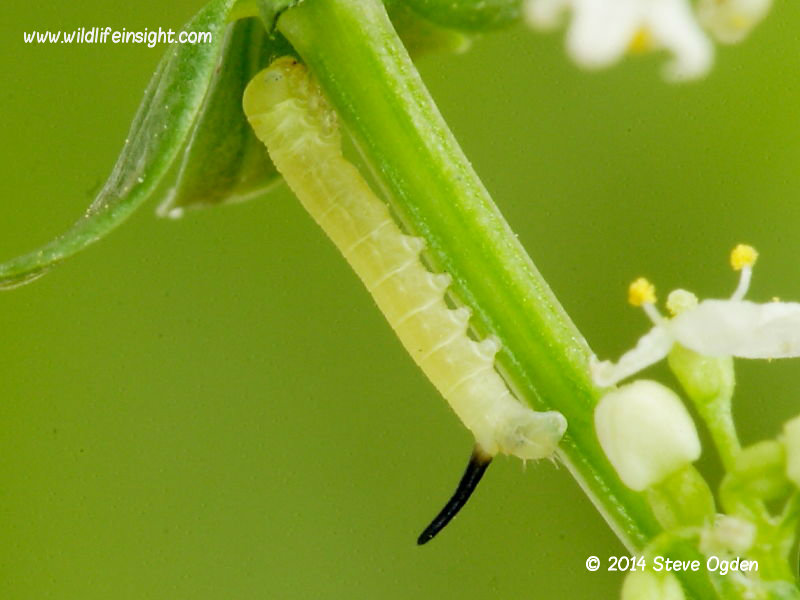 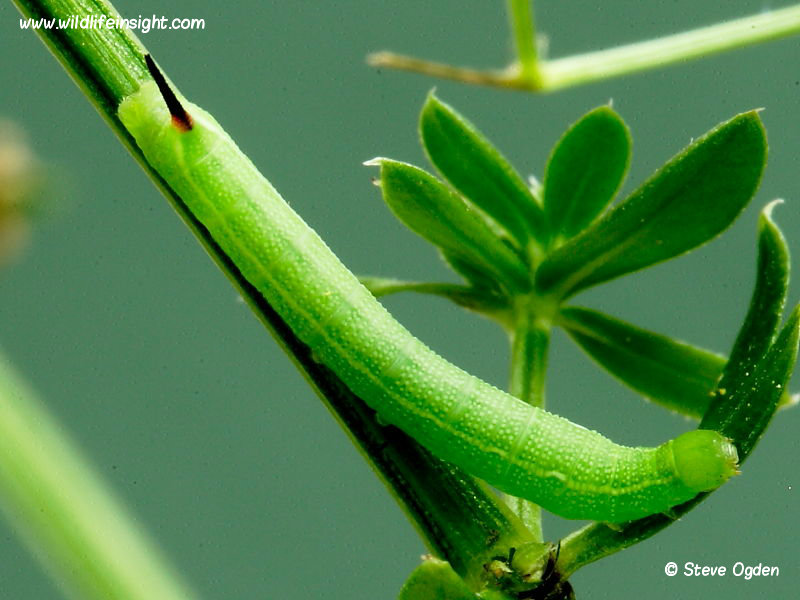 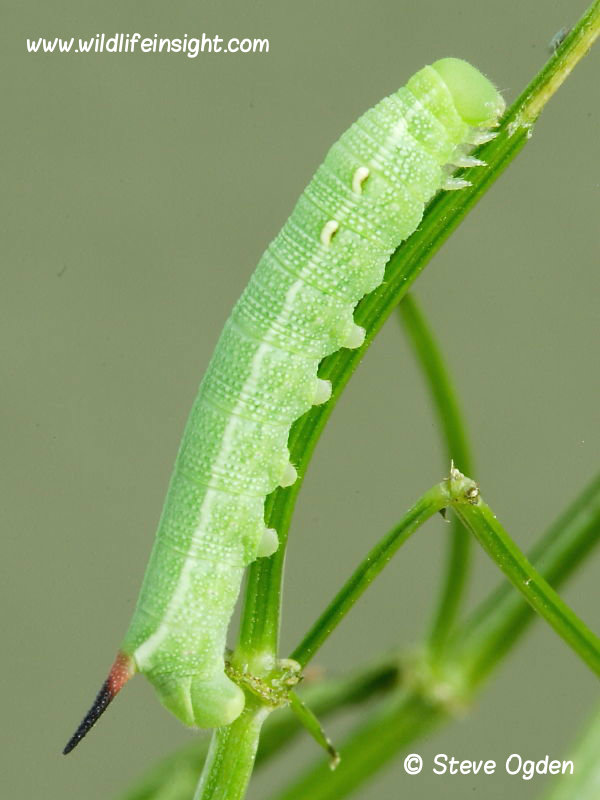 The day old caterpillars are 4mm long and pale green with a noticeable black tail-spike.

The young caterpillars are difficult to spot amongst the leaves and when larger feed at night, remaining low down near the base of plants during the day.

When about 9 days old and 15mm long the first signs of two pairs of ‘eye-like’ markings are visible on the dorsal area close to the head.

The images shown are of a brood in different instars reared from eggs found on hedge bedstraw in a Cornish garden.

On the same bedstraw there happened to also be two smaller eggs laid by the migrant Hummingbird Hawk-moth which were also reared through to confirm identity. 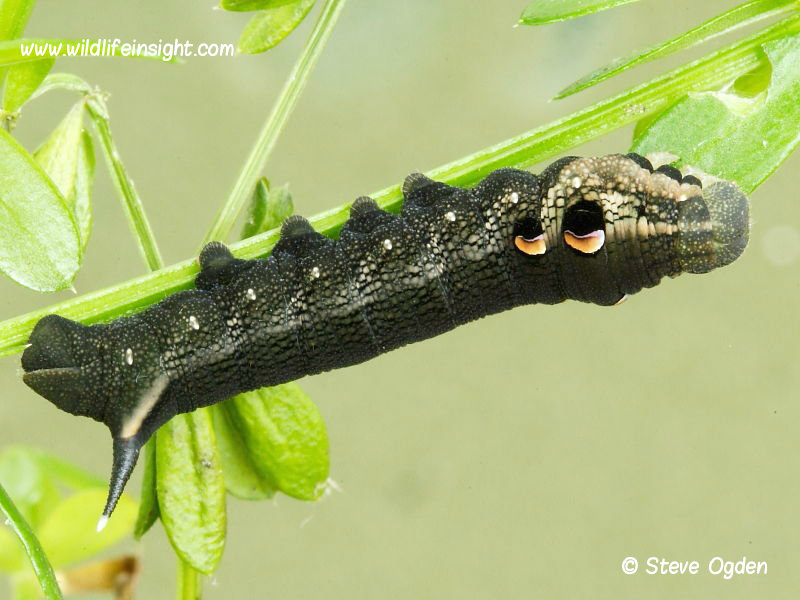 After 12-14 days and at 25-30mm in length many moult from green into a dark form, appearing almost black when fresh, with distinctive ‘eye-like’ markings .

The caterpillars are fully grown in about 30 days reaching 85mm in length.

The most common form shown above is a mix of various shades of brown and grey but green forms are common and occasional almost black caterpillars occur.

The image of the scarcer black form shown was sent in as part of an identification enquiry received from R.Bard and the green form by K.Holmes. 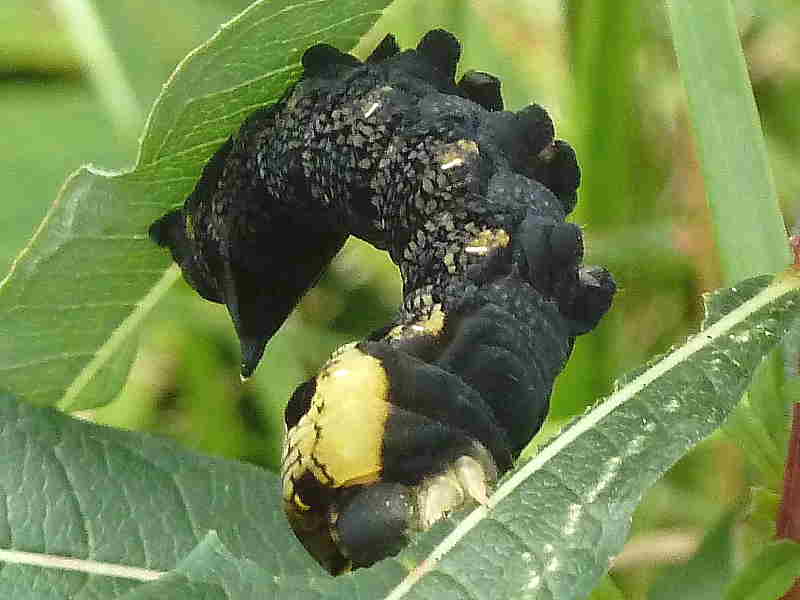 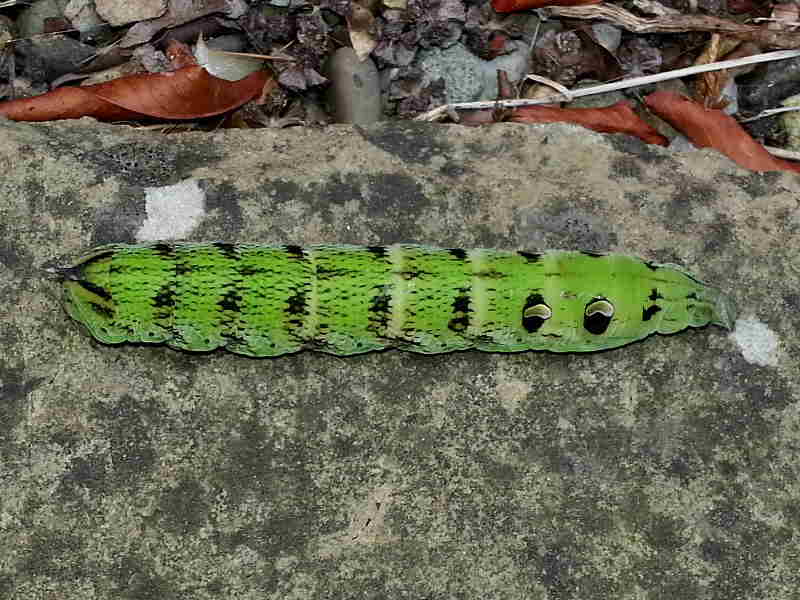 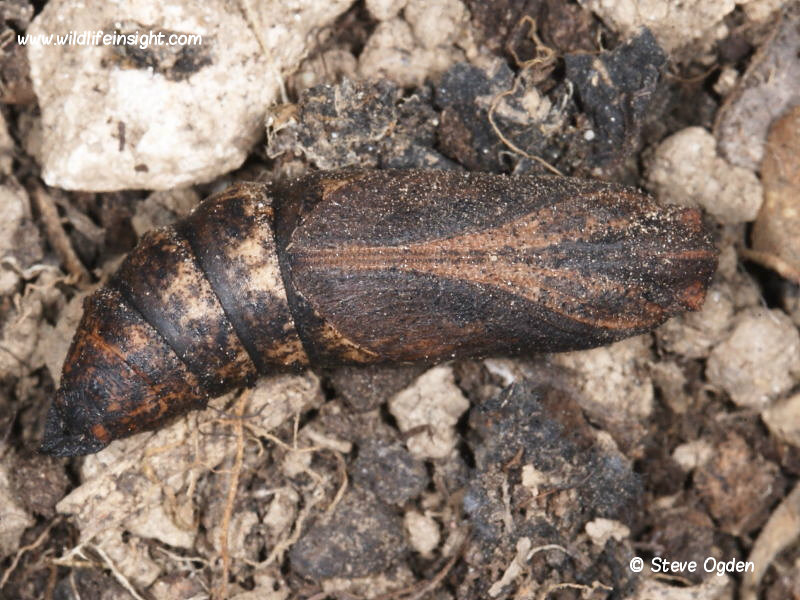 When feeding up in preparation for pupating the fully grown caterpillars are often found high up in the food plants during the day.

Once feeding has ceased they may sometimes be found basking in the sun on grass, paths, patios and lawns.

They have also been recorded being picked up and played with by cats which may explain why they are occasionally found inside houses.

When fully grown the caterpillars pupate just beneath the surface of soil or leaf litter where they overwinter.