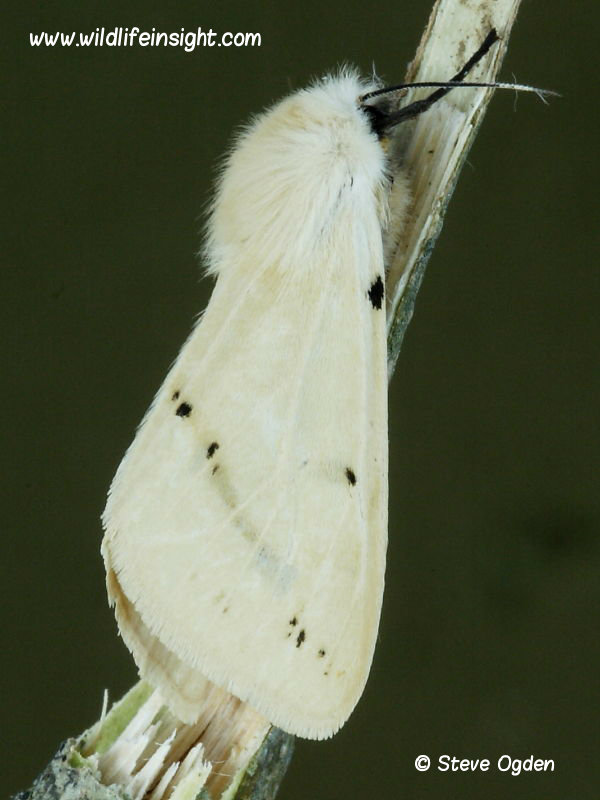 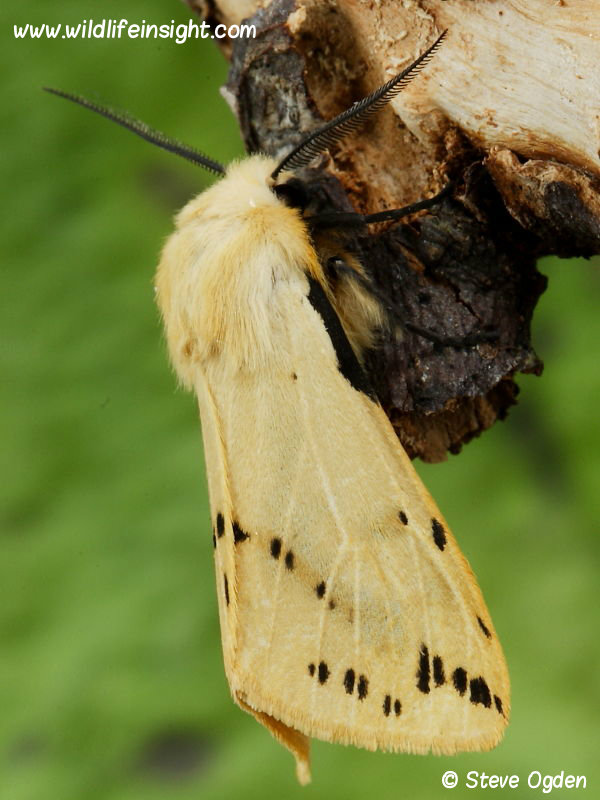 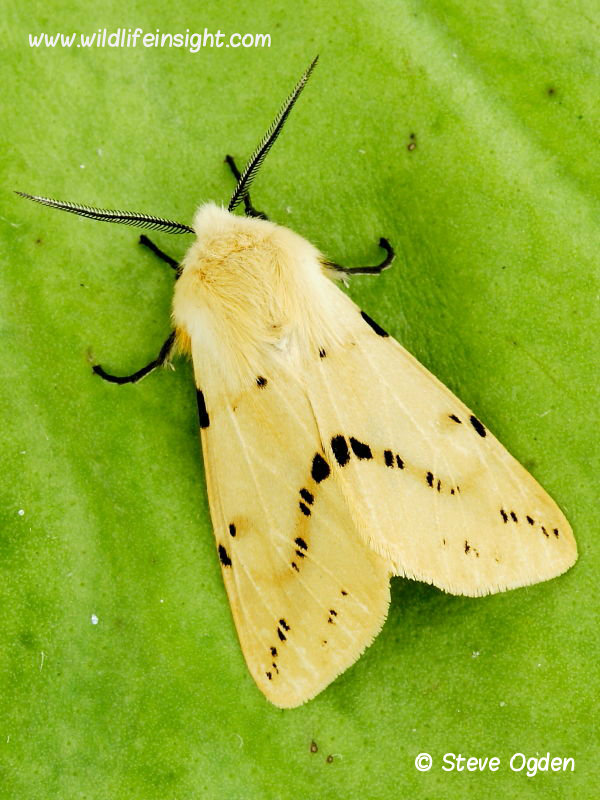 Life cycle and identification of the Buff Ermine moth and caterpillar

The Buff Ermine, Spilosoma luteumis, is a common species throughout most of the British Isles.

It flies in a single generation between May and July when it is attracted to light.

They are found in a wide range of habitats including gardens.

Information on the life cycle and rearing can be seen below.

Other caterpillars can be seen in The Caterpillar galleries

Identification of the Buff Ermine moth

Forewing length of about 20mm.

Normally easily identified by the black markings on buff/whitish wings.

However, there can be some variation in the number and distribution of black markings.

The males have feathered antennae. 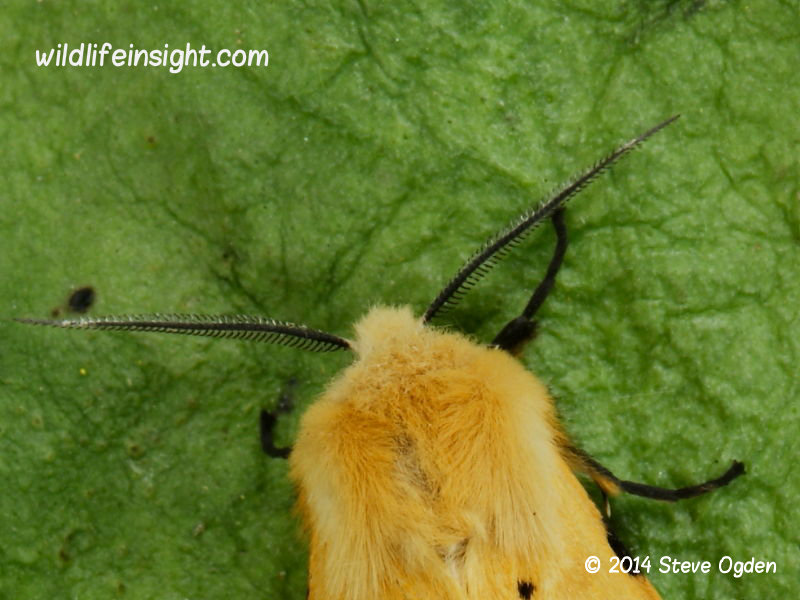 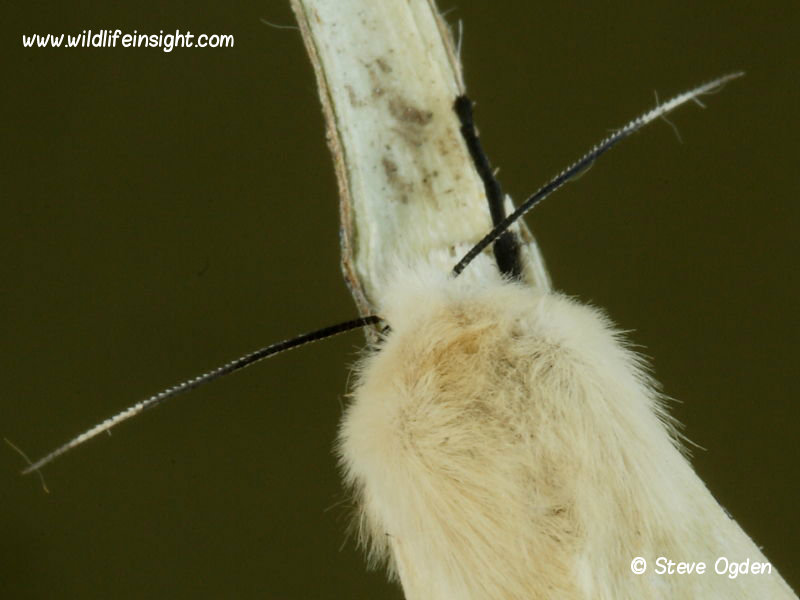 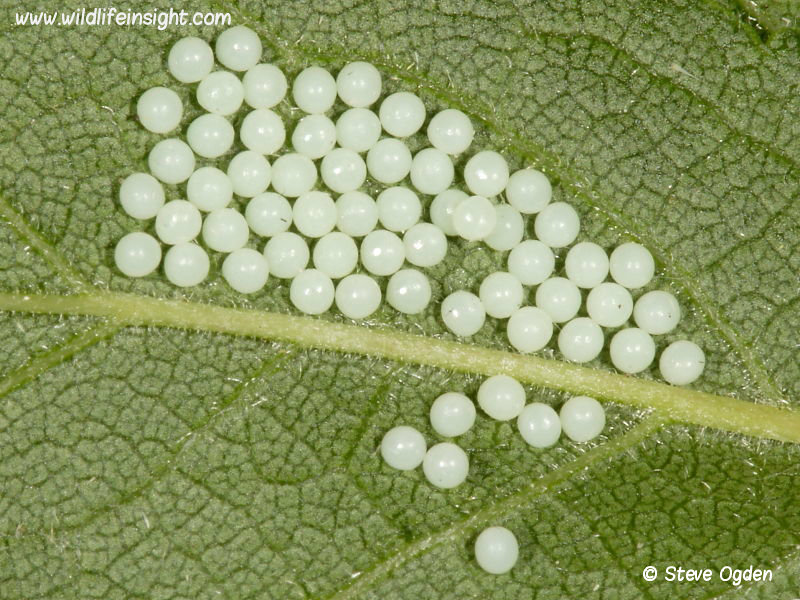 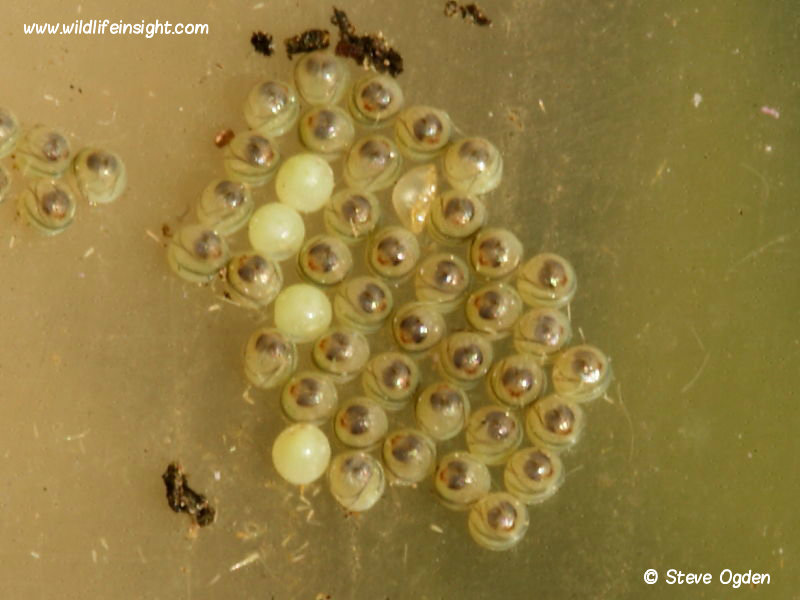 Adults fly between May and the end of July.

Females lay clusters of eggs on the foodplant . 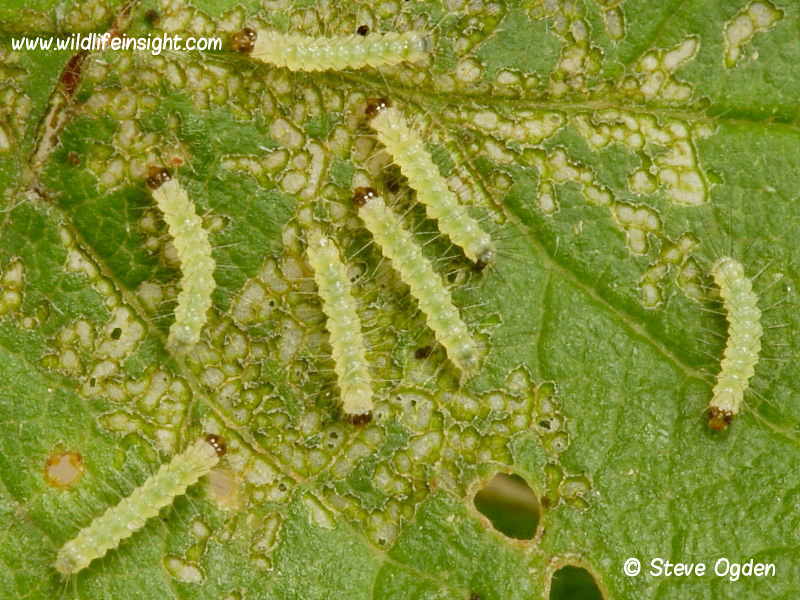 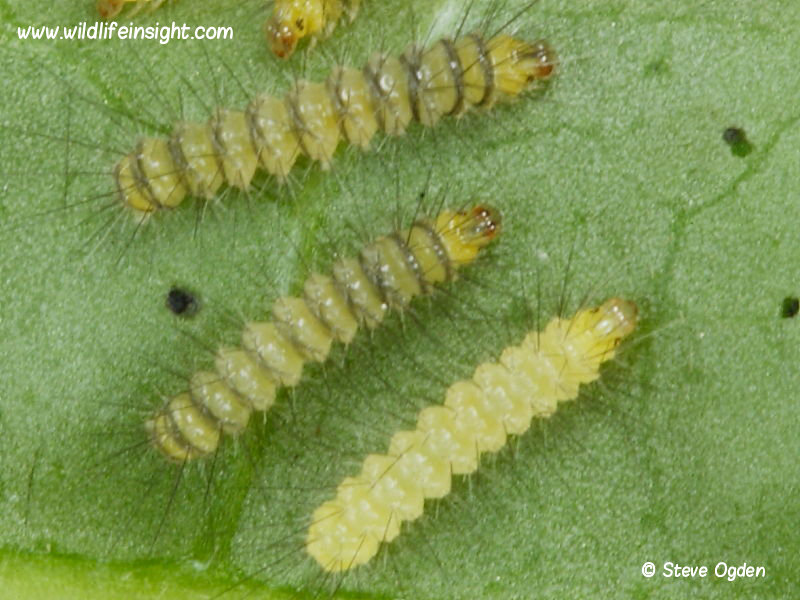 The Buff Ermine caterpillars feed on a wide variety of low growing herbaceous plants including dandelion, dock and common nettle.

At times several may be found feeding on the same plant.

The caterpillars become progressively more hairy with each moult.

They are generally fully grown within 30 days and about 45mm in length with a light brown head, pale dorsal line, a distinctive pale sub dorsal line and clusters of quite long brown hairs which can appear quite gingery in strong sunshine.

Having left the foodplant the prepupating caterpillars are often seen during the daylight wandering over the ground in search of somewhere to pupate.

They overwinter in a cocoon formed amongst plant and leaf litter.

The adult moth emerges in early May.

For help with caterpillar identification and more information can be found in the Illustrated Guide to Caterpillars. 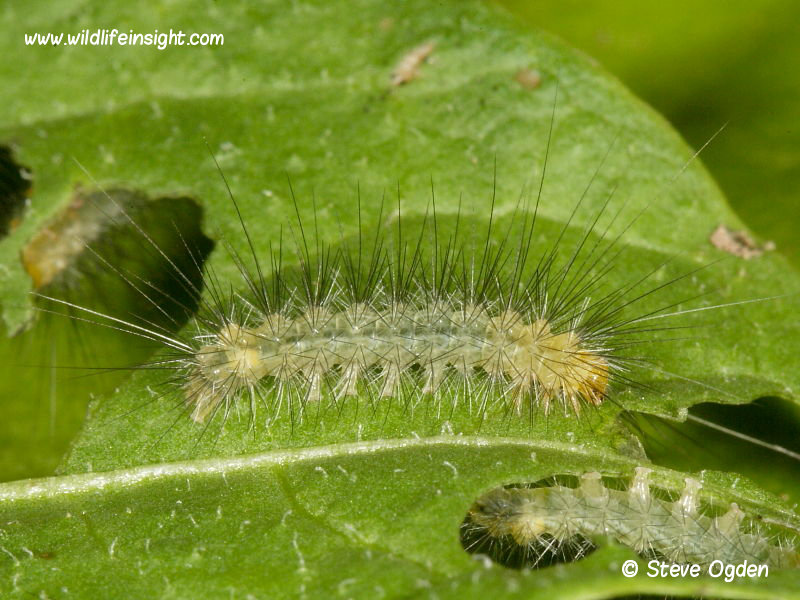 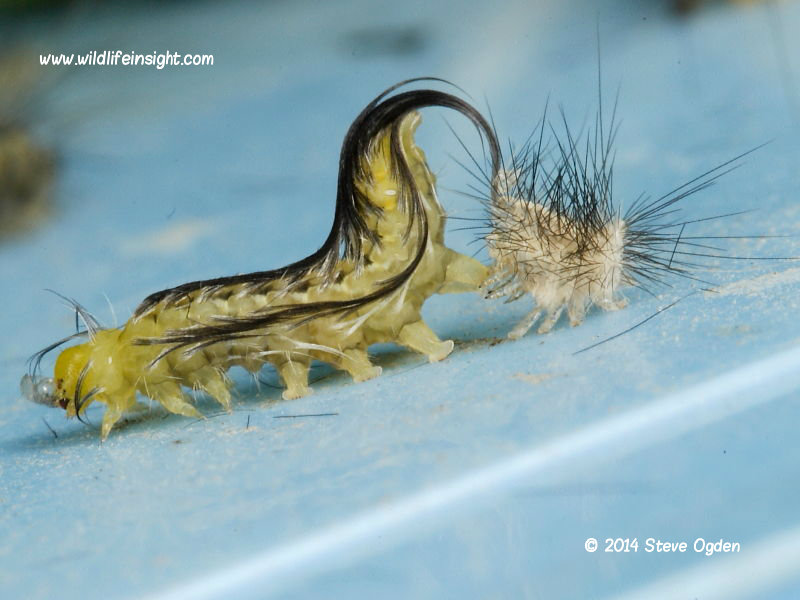 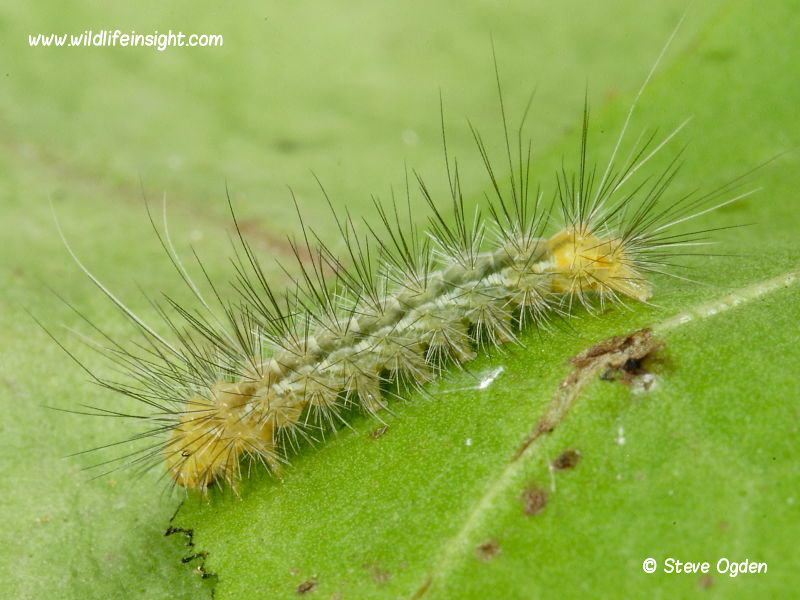 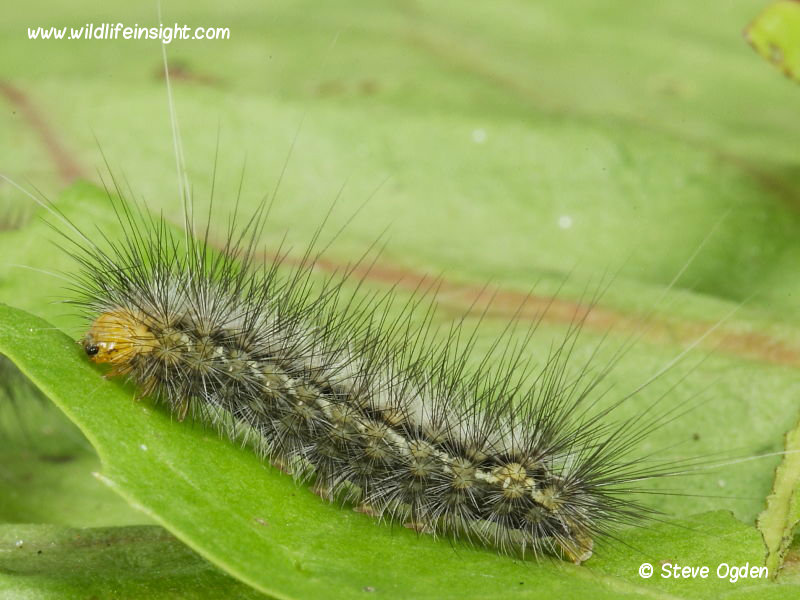 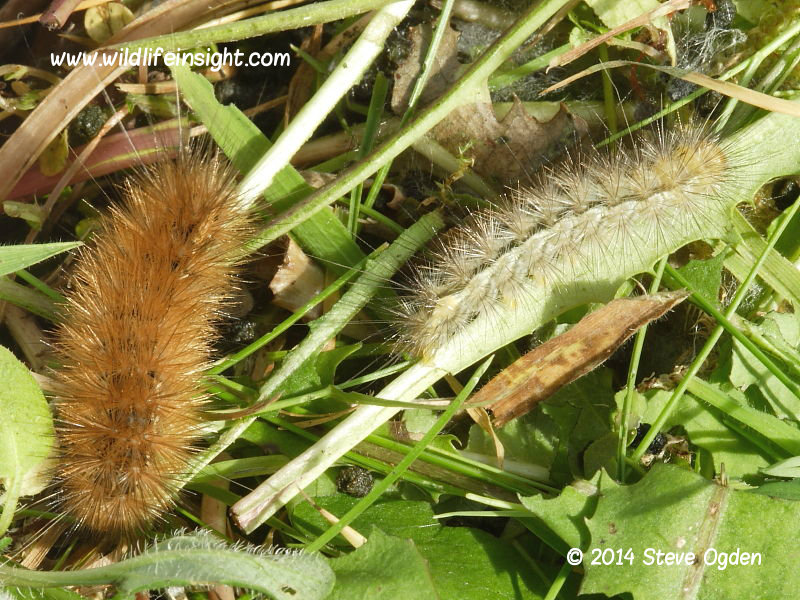 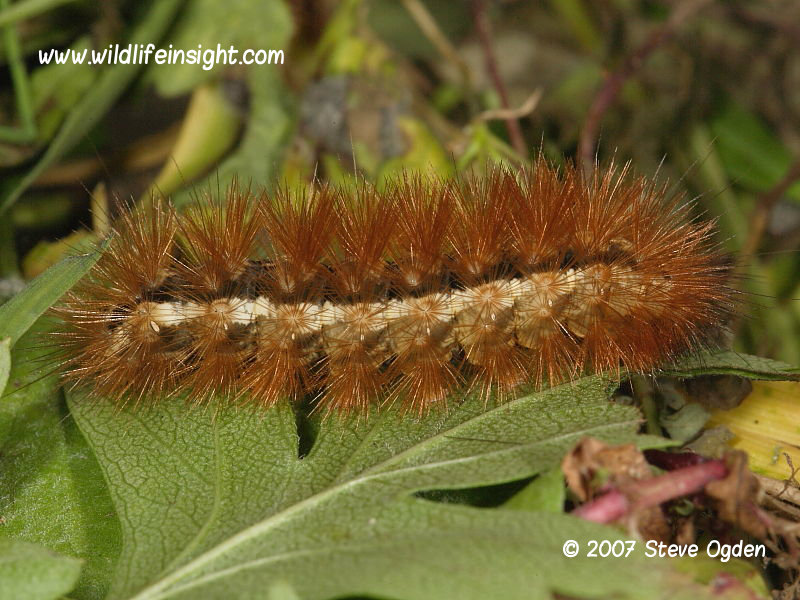 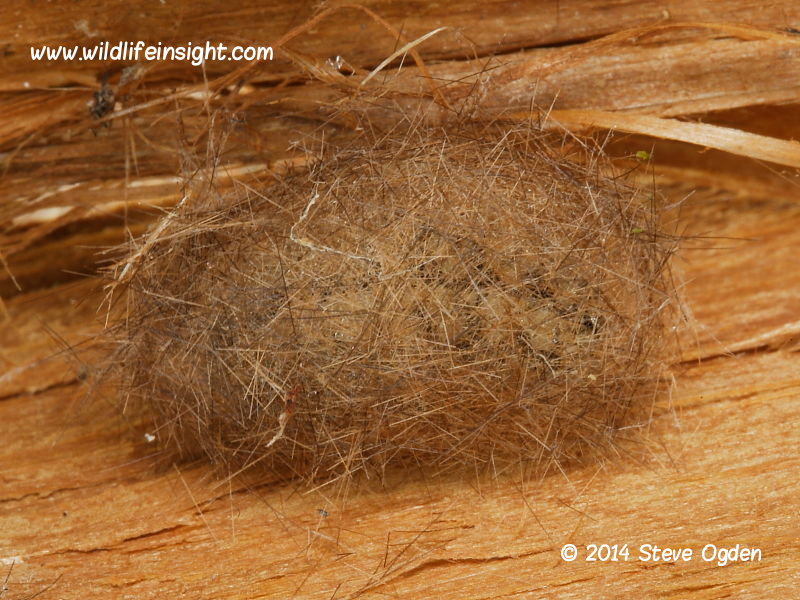 The Buff Ermine is very easy to rear either from eggs or collected caterpillars. Those fully grown caterpillars frequently found wandering are likely to have already stopped feeding and ready to pupate.

Female moths will often lay freely in light traps or when placed in a rearing cage with some foodplant.

The caterpillars can be fed on a variety of herbaceous and easily obtained foodplants such as dandelions, common nettle and honeysuckle.

When fully grown they will spin a cocoon amongst leaf plant litter.

The overwintering cocoon are best placed in a cool room or outhouse.