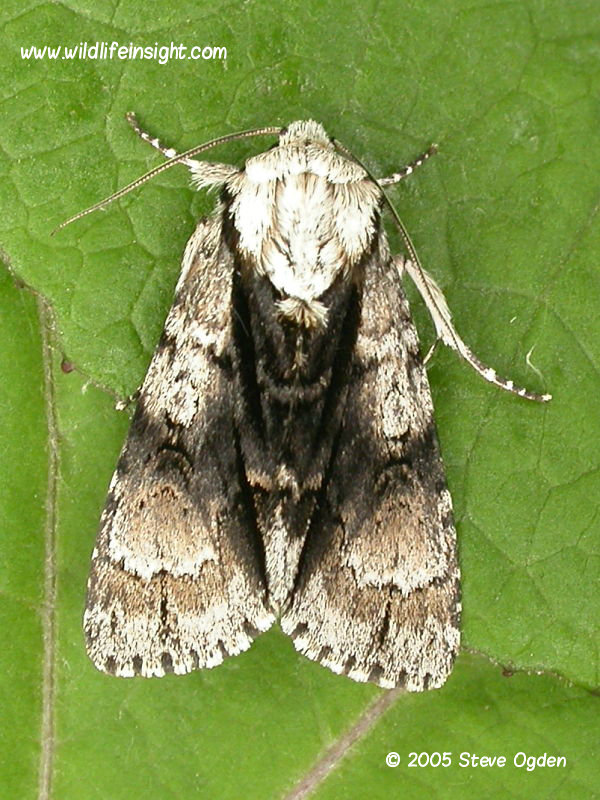 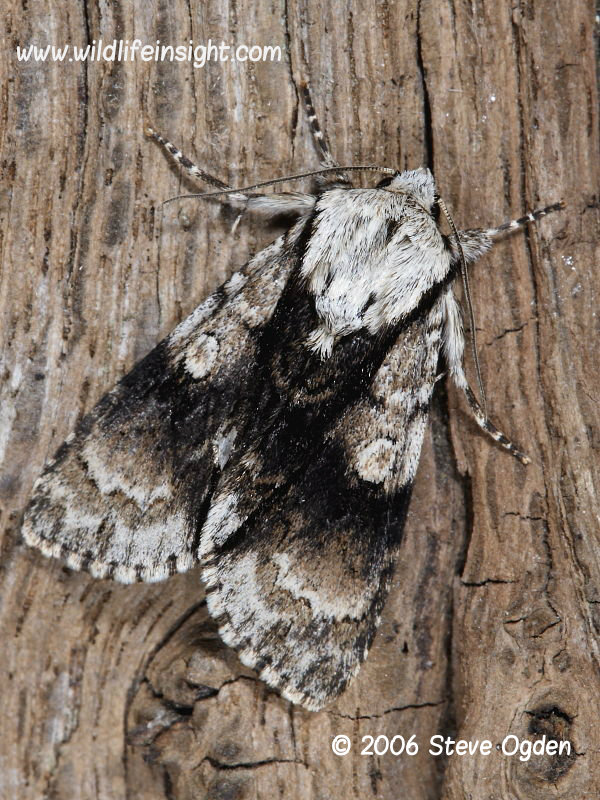 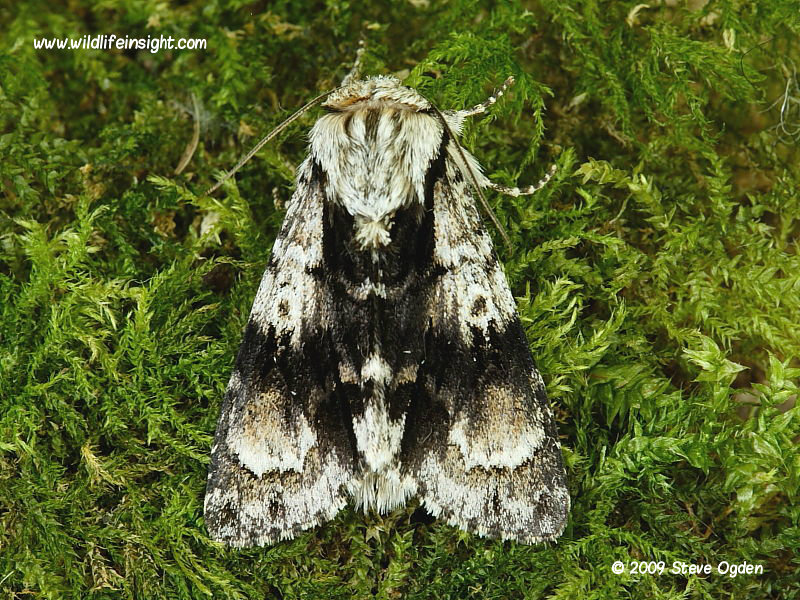 The Alder moth is a member of the large Noctuidae family of moths, sub family Acronictinae, many of which are commonly referred to as Daggers.

The adult moth is found throughout much of the southern half of the British Isles, large parts of Europe and eastwards into Russia.

The species has a wingspan of up to 40 mm and flies in a single generation from May to June.

In the south west of the British Isles it’s most commonly found in damp, mixed deciduous, wooded areas.

The photographs featured are of adult moths attracted to light at several locations in the south west of the UK – Somerset, Devon and Cornwall. 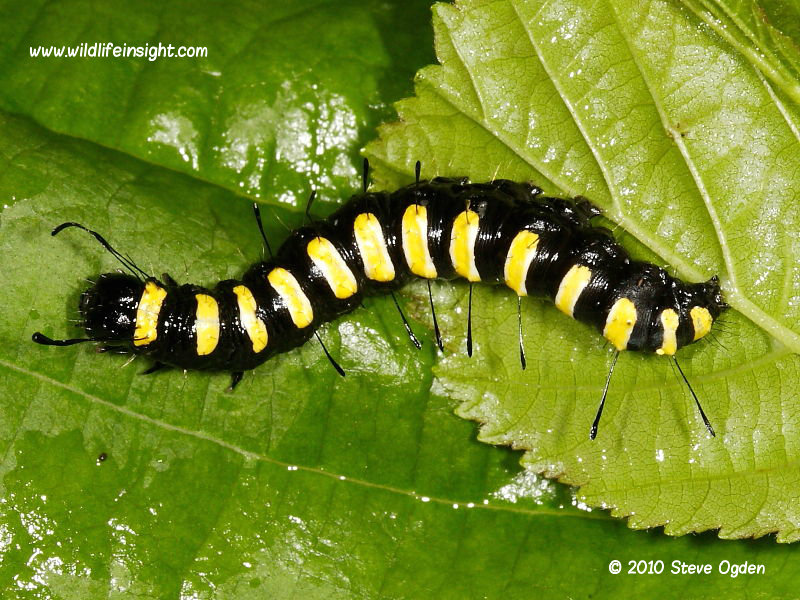 The fully grown, distinctive, yellow and black striped caterpillars are 30-35 mm in length.

Although the larvae feed on a wide variety of deciduous trees they are not commonly found when searching.

It seems probable this is because they tend to be out of sight on the upper side of leaves and well above eye level.

On moulting at about 25 mm the caterpillars take on the appearance of the fully grown larvae; having yellow and black stripes and glossy, black, club tipped setae. 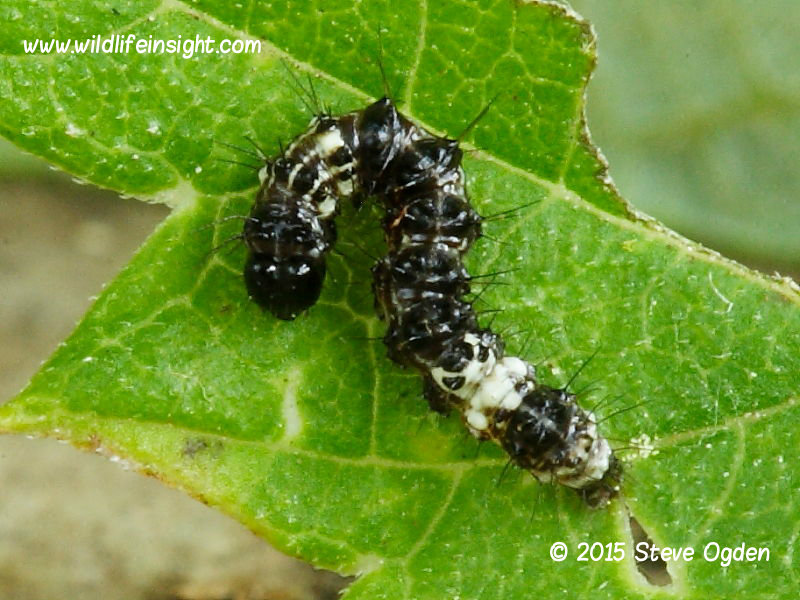 The featured photographs are of Alder Moth caterpillars found by chance when searching for other species.

The 6 mm long caterpillar was found on sallow in south west Cornwall while searching for Puss Moth and Sallow Kitten eggs and caterpillars.

The fully grown caterpillar featured from North Cornwall was found on the ground beneath a recently fallen beech tree. 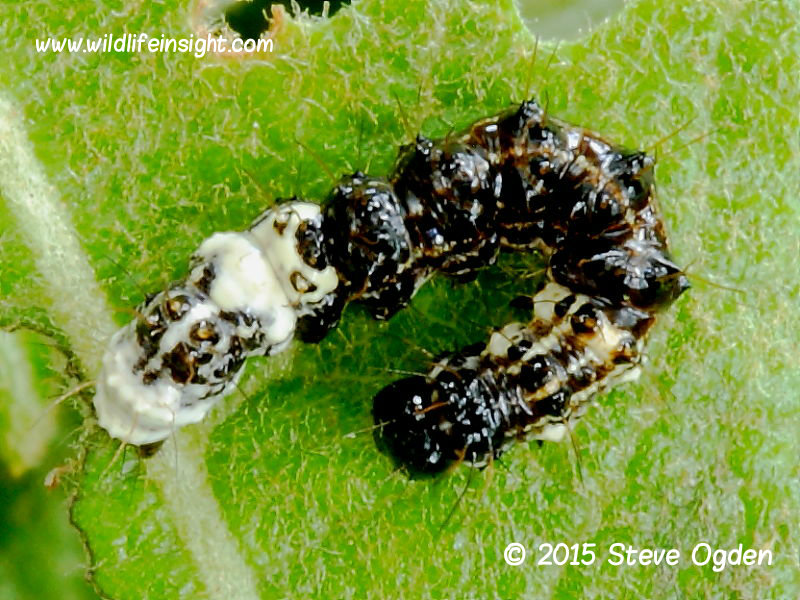 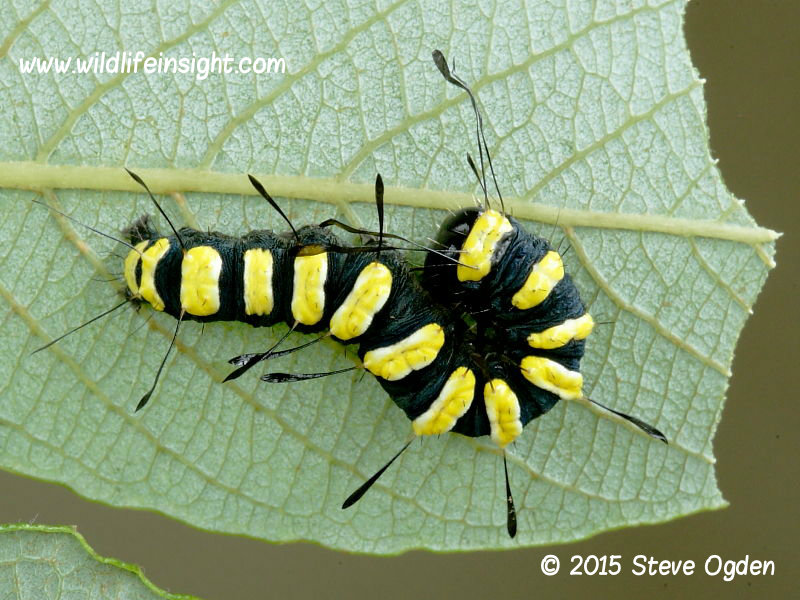 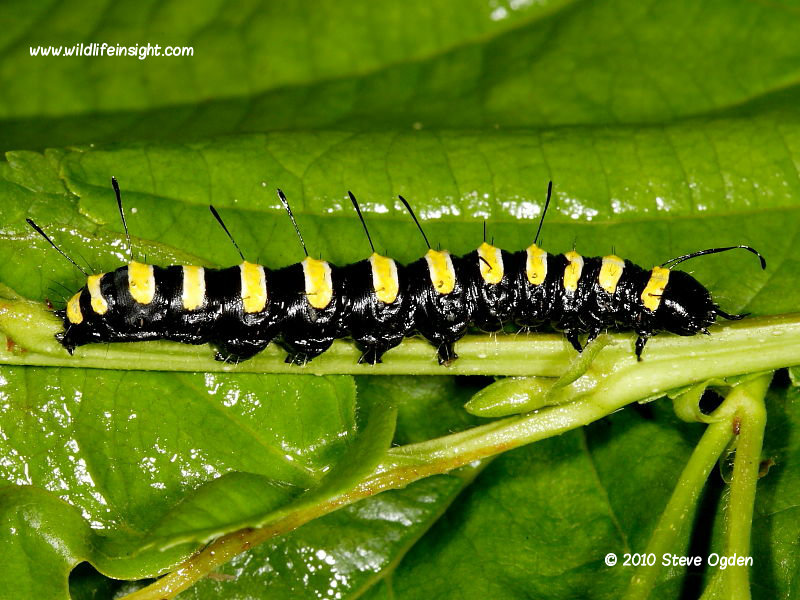 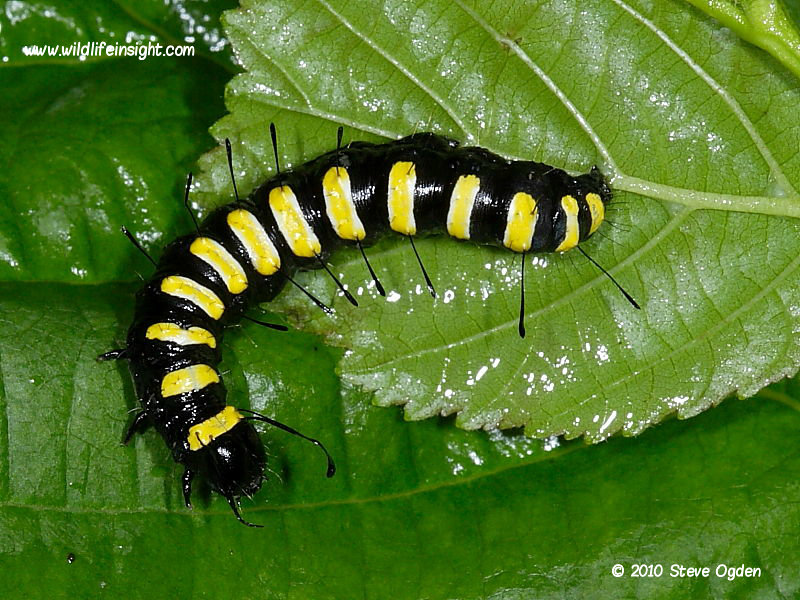 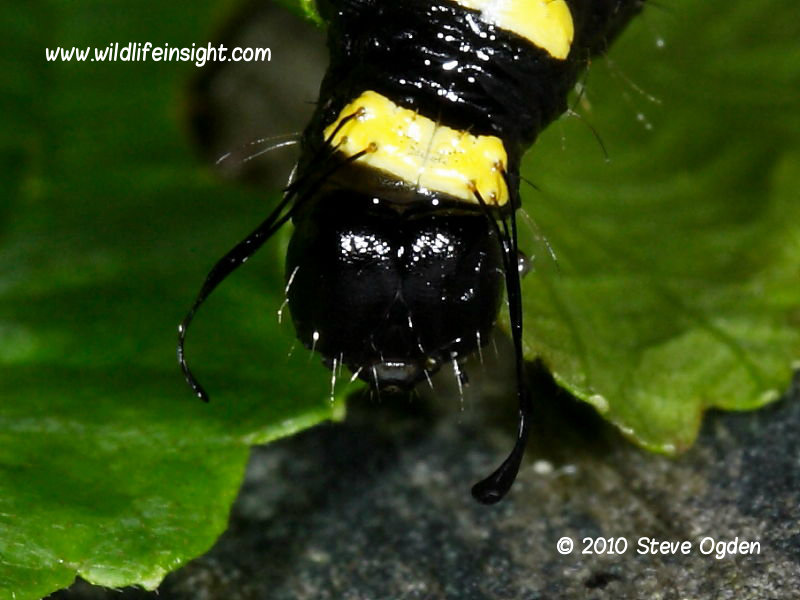 The Alder Moth cocoon and rearing 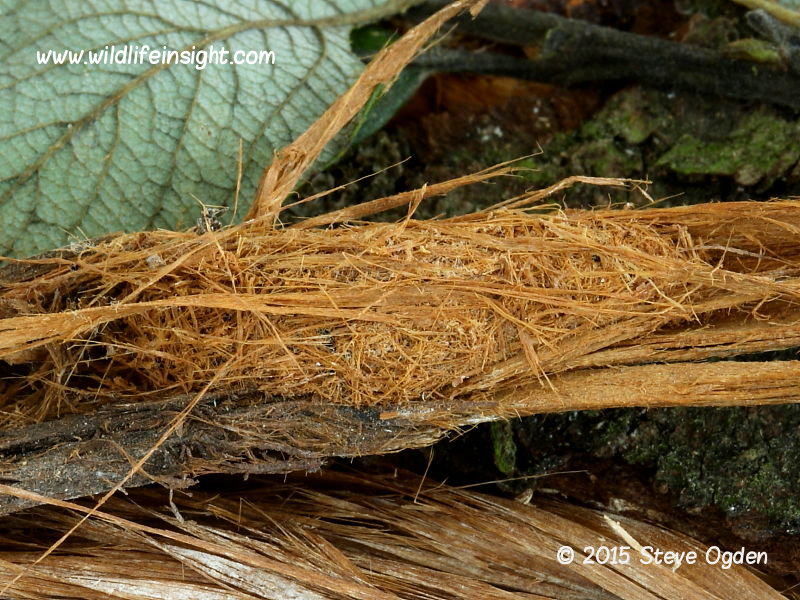 The 6 mm long caterpillar found on a sallow leaf was easy to rear.

The only additional requirement being the provision of bark and soft wood for it to pupate in.

After 24 days the fully grown prepupating caterpillar formed its cocoon amongst the bark.

In the wild the caterpillars burrow into soft wood of tree trunks to pupate.

The cocoon was placed in a cool room to overwinter.

The adult moth emerged in May the following year.

Other commonly found dagger species (Acronictinae) in the British Isles and many parts of Europe include The Dark Dagger, The Grey Dagger, The Sycamore, The Knot Grass, The Poplar Grey and The Miller. 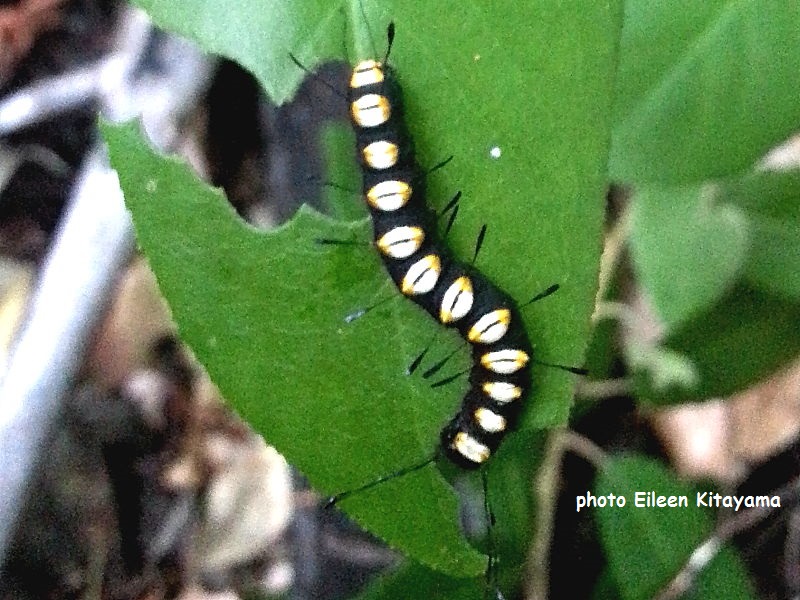 A very similar species in appearance to the Alder Moth is the Funerary Dagger moth, Acronicta funeralis, which is resident in the US and Canada.

The caterpillars also look similar, with glossy, black, club tipped setae similar to those of the Alder moth caterpillar.

In North America these setae have resulted in Funerary Dagger moth caterpillars being referred to as Paddle caterpillars.