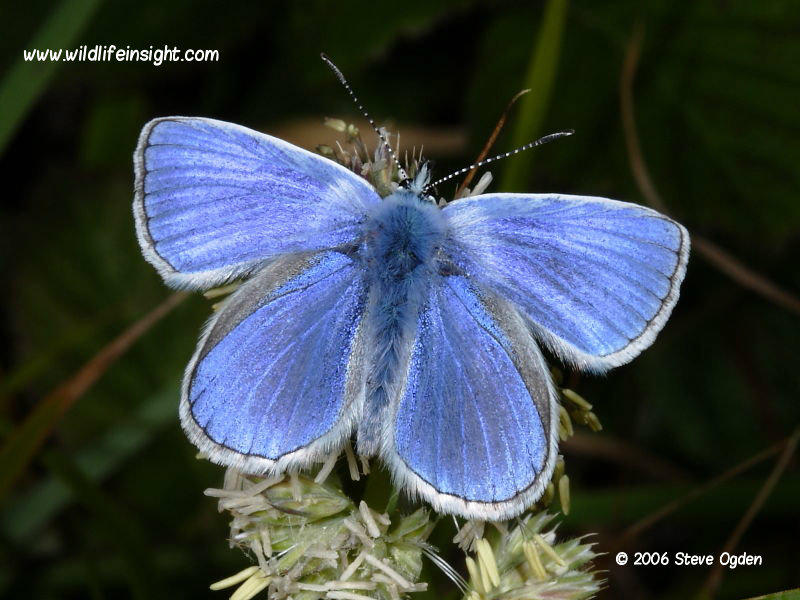 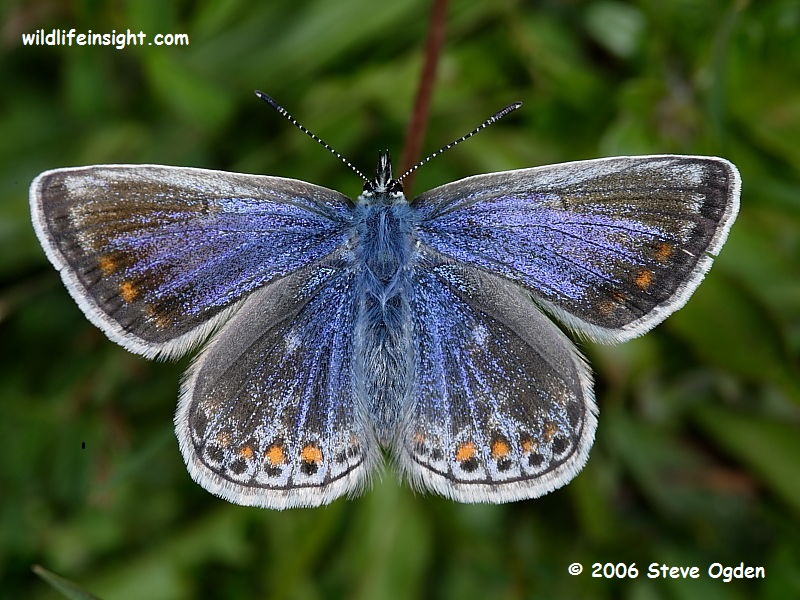 The Common Blue is the most widely distributed blue butterfly in the British Isles and large parts of Europe.

The butterfly is found in a wide range of habitats including urban areas, on uncut road verges and in gardens.

It’s a species that’s most abundant in open, unimproved landscapes with an abundance of wild flowers and relatively short grasses.

The number of generations and flight periods are dependent on local climate. In most of the British Isles it flies in two generations between May and the end of June and again from July to October.

In parts of Cornwall and in southern Europe further generations may occur. While in cooler northern parts and at higher altitudes the Common Blue is restricted to a single generation between June and September. 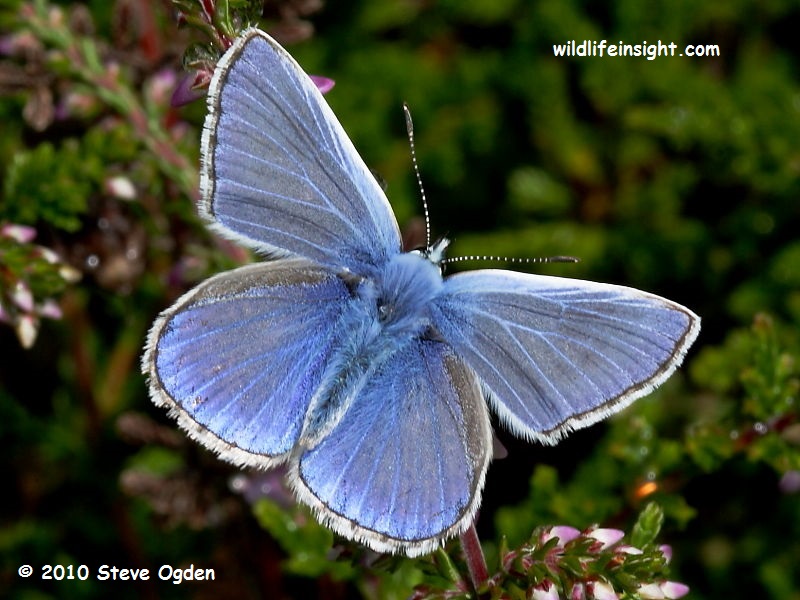 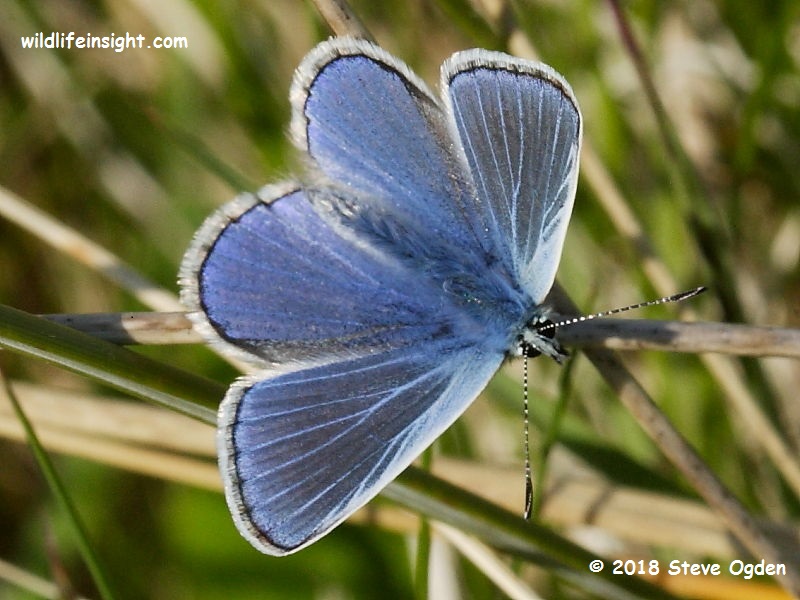 The Common Blue butterfly has a wingspan of C 35 mm. The upperside of the male is a vivid blue, edged in black with a white fringe.

The legs and antennae are black and white. 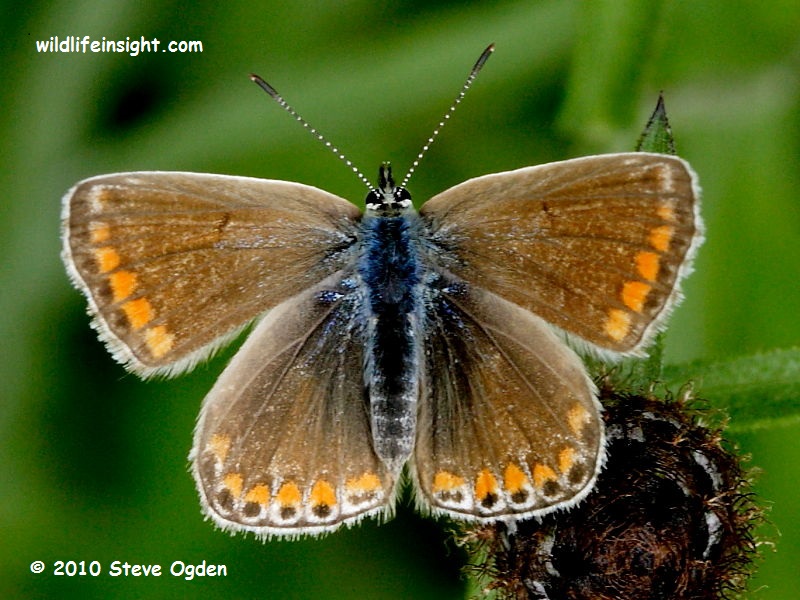 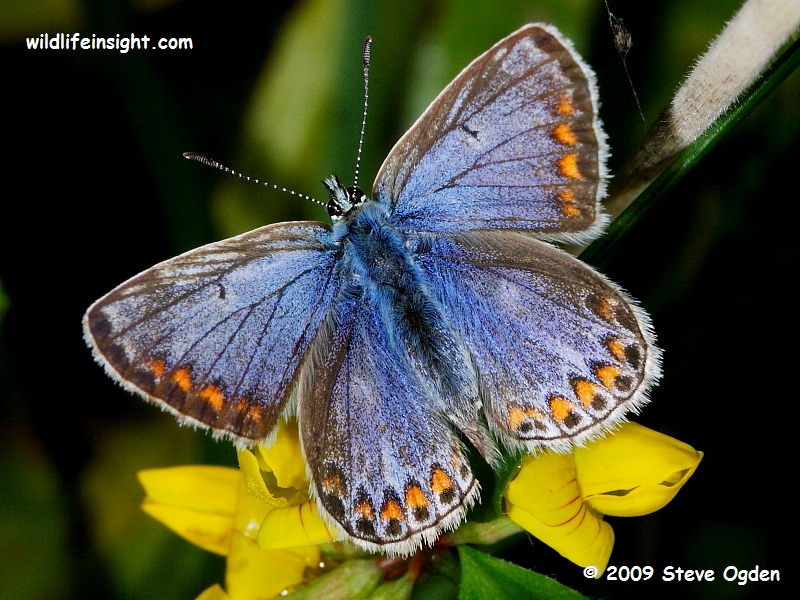 The upperside of a female Common Blue Butterflies is more variable than that of the male. The most common form being brown with a light dusting of blue scales. On the outer edge of the forewing are a series of orange spots edged on the outer side in black and petering out towards the tip.

The underwing also has a row of orange dots but with outer black dots highlighted in white.

Other female forms have blue scales extending with varying density over both fore and hindwings. 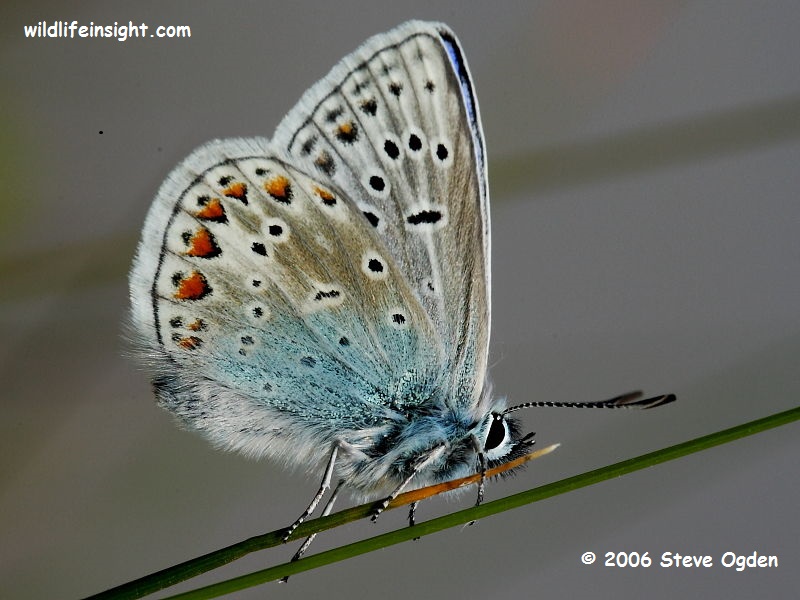 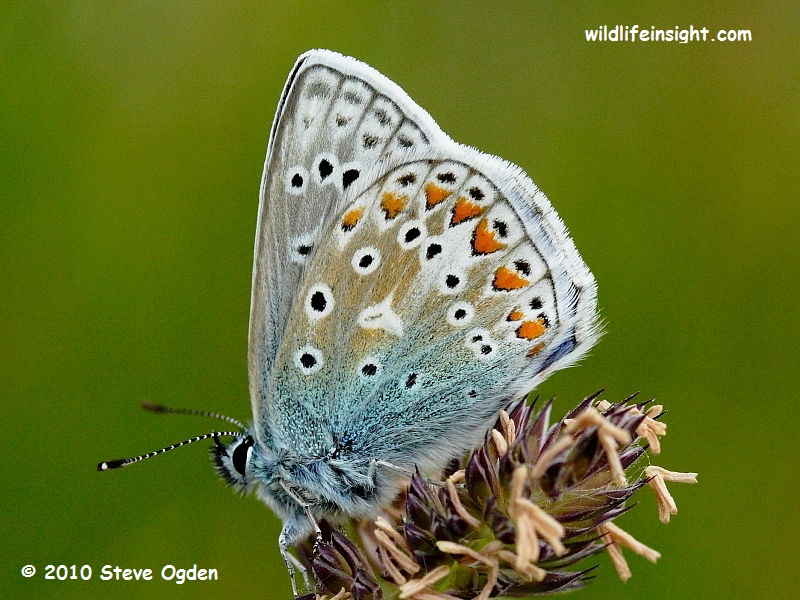 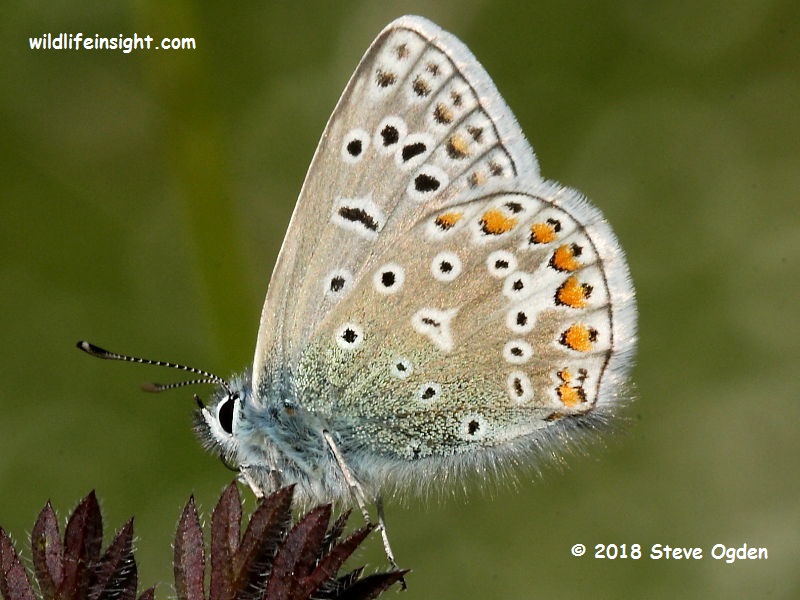 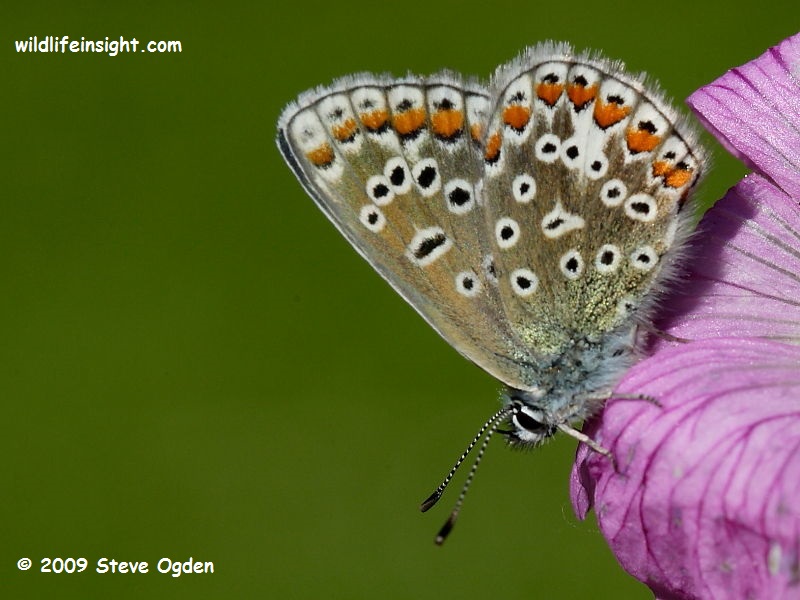 The undersides of the Common Blue Butterfly are distinctive. The distribution of black spots is often the most reliable way to distinguish the Common Blue from other blue butterflies, in particular when identifying worn specimens.

The male underside is a light grey with black spots outlined in white.

The female underside has a browner background to the that of the male’s but with the same pattern of black spots outlined in white.

The other most frequent Blue Butterfly found in gardens is the Holly Blue.

In southern regions of Europe there is a far greater diversity of Blue butterfly species, many of which can be seen in the Spanish butterfly gallery. 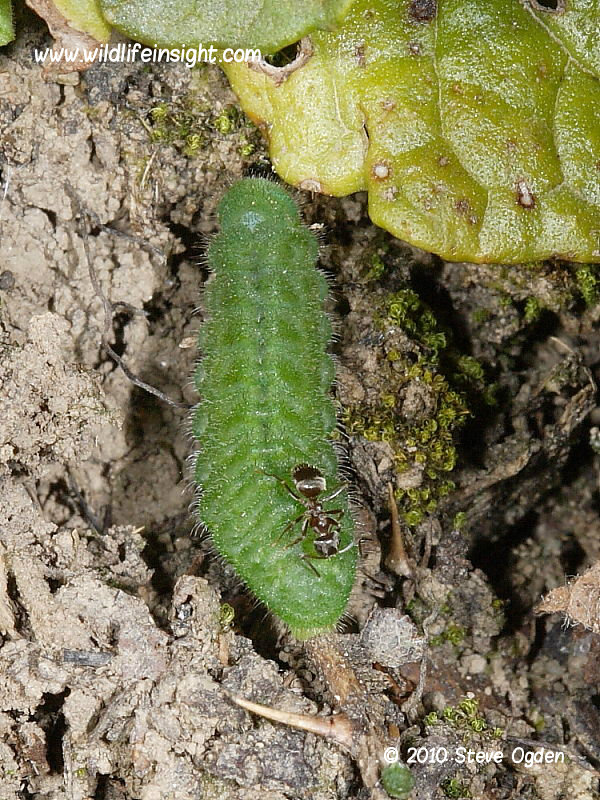 The fully grown caterpillar featured was reared from an egg found on clover being collected to feed the caterpillars of a Helice form of Clouded Yellow butterfly being reared.

Other caterpillars can be seen in the caterpillar galleries, species pages and latest sightings 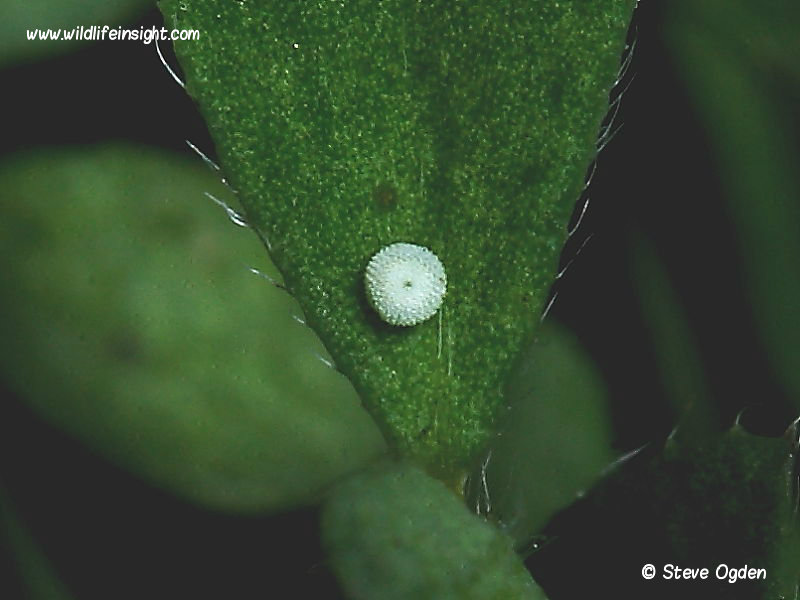 The circular eggs are .6 mm wide and laid singly, most frequently on the larval foodplant. Despite their small size the eggs are not too difficult to find but, as always, a short cut is to see a female butterfly laying.

Eggs hatch in c 6-9 days when the emerging caterpillars are 2 mm long, brown and quite hairy.

The eggs featured are those laid by a female Common Blue Butterfly on Bird’s-foot Trefoil on the cliff tops of Porthgwarra in south west Cornwall, near Landsend – cliff tops well known for seawatching, wild flowers and migratory birds and insects. 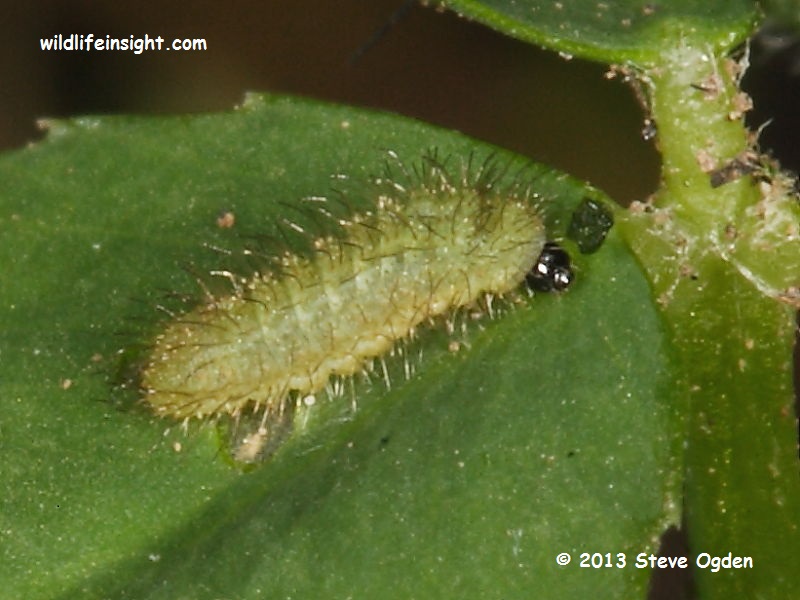 First feeding signs are pale impressions in the leaf of the tiny larva, where only one outer layer of the leaf has been eaten.

With each moult the caterpillar becomes progressively greener.

The caterpillar of the first generation is fully grown, 12 mm, in 4-6 weeks and pupates low down, near the ground under the foodplant.

Later generations of caterpillars overwinter low down on the foodplant when small and complete their growth in 9 months. 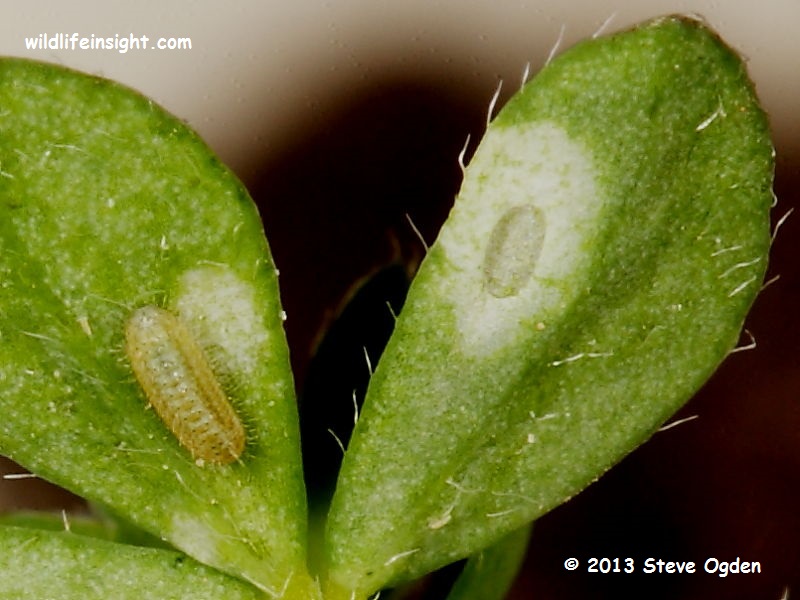 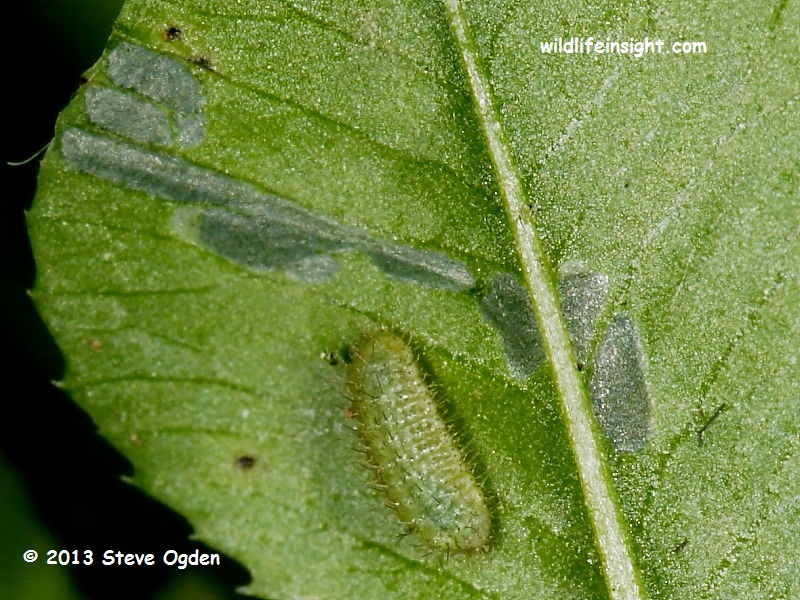 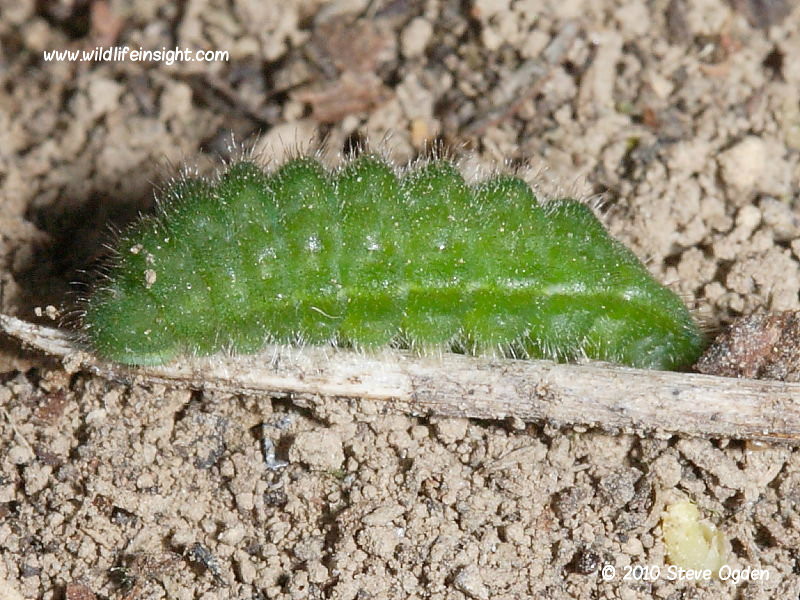