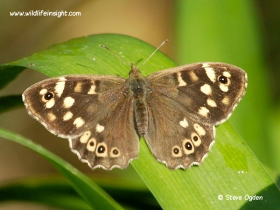 The Speckled Wood is a common butterfly in much of the southern half of England and in recent years has been rapidly extending its range northwards.

The species is widely distributed in a variety of different habitats including open woodland, along countryside hedgerows and in gardens.

The flight period is between early Spring and late Autumn when there are at least two broods and a partial third in the south.

The species is also well distributed throughout much of Europe where the nominate form P. a aegeria is the predominate form in warmer regions. 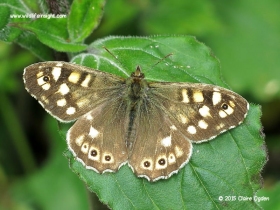 Speckled Wood butterflies have a wingspan of 47-50mm that give the impression of a dark brown butterfly with a series of pale yellow spots and markings.

Females are marginally larger than the males, have larger spots and more rounded wing tips.

Variations occur in the number and size of the pale yellow spots.

Both males and females of later broods tend to be darker.

In the British Isles and cooler northern parts of its continental range the predominant form is P. a tircis. 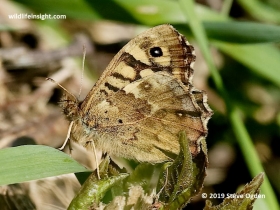 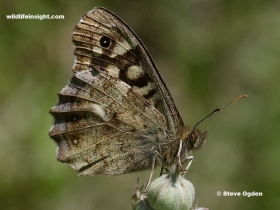 Undersides of the male and female are similar.

Other Butterflies can be seen in The Butterfly Galleries and species pages. 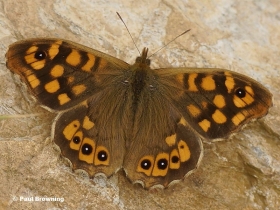 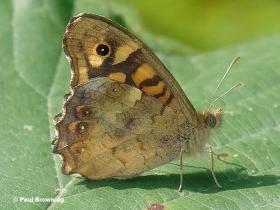 In warmer southern parts of Europe and North Africa the nominate form P. a aegeria is the predominant form.

The ground colour is a pale orange similar to that of the Wall Brown butterfly.

Those featured were recorded in Spain by Paul Browning. 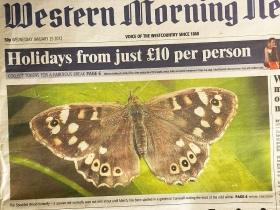 In the UK the Speckled Wood has two and in favourable summers a partial third brood between March and October.

Uniquely for British Isles butterflies the caterpillars of late broods may overwinter as either a caterpillar or chrysalis. This overlapping of different development stages can make brood numbers difficult to assess.

Although it has been recorded in every month the earliest butterflies normally emerge between February and March.

The Speckled Wood featured in the newspaper headline was an unusually early butterfly seen flying in a Cornish garden on the 13th of January.

Winters can be mild on the coast of South West Cornwall and mostly frost free. So it seems likely the overwintering chrysalis had been in a particularly sheltered spot with several days of sunshine triggering the butterfly’s premature emergence. 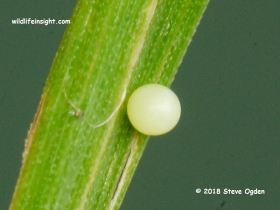 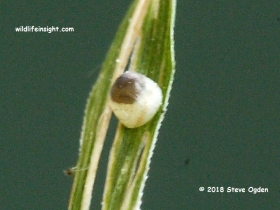 Single eggs are laid on the blades of a variety of grasses.

The egg featured above was laid in a Cornish garden on a seemingly unappetizing scrap of Annual Meadow Grass (Poa annua) sprouting from an otherwise barren stone wall surrounding a little pond.

Many butterfly species appear quite meticulous in searching out healthy plants capable of supporting broods on which to lay. However, on this occasion there seemed little chance of a hatching caterpillar surviving on such an unhealthy little plant. 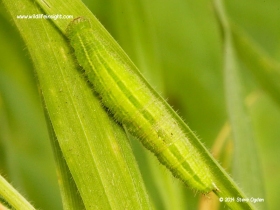 Speckled Wood caterpillars feed on a variety of grasses such as couch, annual meadow grass, false-broom and Yorkshire-fog.

Other Butterfly caterpillars can be seen in the Butterfly Caterpillar Galleries and species pages.

Moth caterpillars can be seen in the Moth Caterpillar Galleries and species pages. 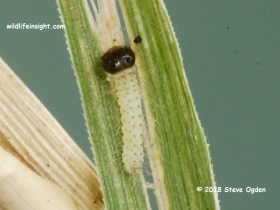 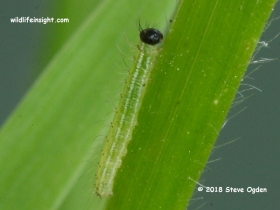 Caterpillars hatch within ten days and are 2mm in length, yellowish-white, with a disproportionately large black head and pale hairs.

After the first moult they are light green with pale lines.

Introduction to rearing moths and butterflies 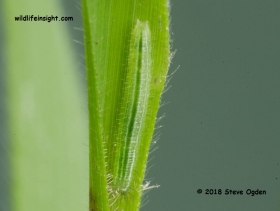 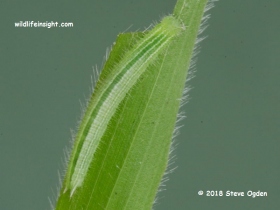 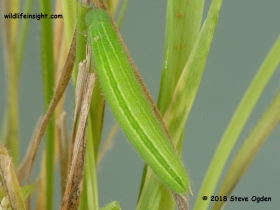 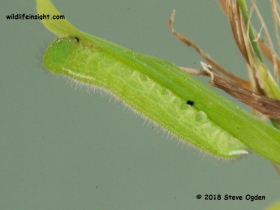 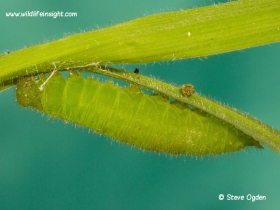 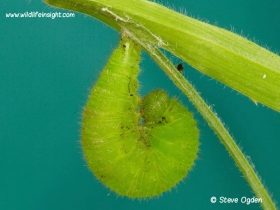 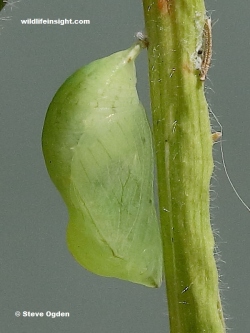 The late brood egg featured took 89 days for the caterpillar to hatch and pupate. This was twice the time of late Spring and Summer broods reared in warmer conditions.

Those Speckled Wood chrysalis not overwintering normally hatch after 3-4 weeks.

Should this caterpillar have not changed into a chrysalis to overwinter then it may have remained in this larval state for over 6 months.

The chrysalis was barely 10mm in length – quite small for a butterfly and caterpillar of this size.

Those reared have mostly been green but they may also be dark brown.