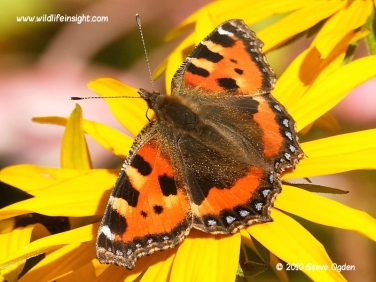 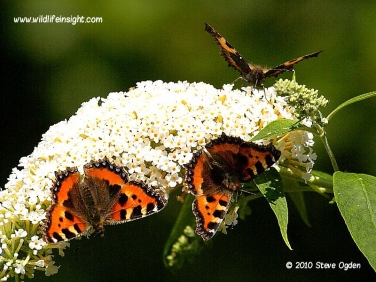 The Small Tortoiseshell Butterfly, Aglais urticae, is one of the most common butterflies recorded throughout much of the British Isles and Europe. Although numbers in the British Isles have declined significantly in recent years.

The butterfly occurs in a wide variety of habitats including gardens and open countryside where the larval food plant is nettle.

Two broods occur in the south and a single one in the cooler northern parts of its range.

Adults hibernate during the winter when they are often found in garden sheds and houses.

The butterflies are commonly seen nectaring on a wide variety of flowering plants and shrubs such as Buddleia. 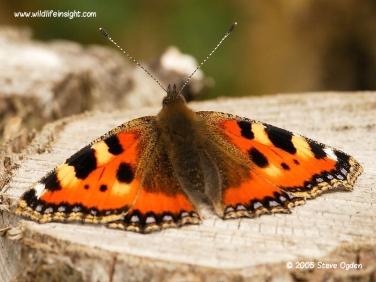 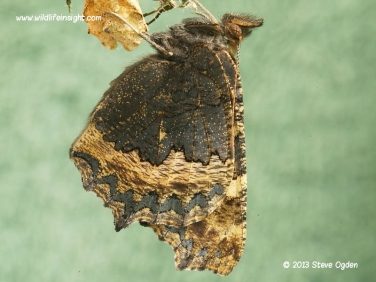 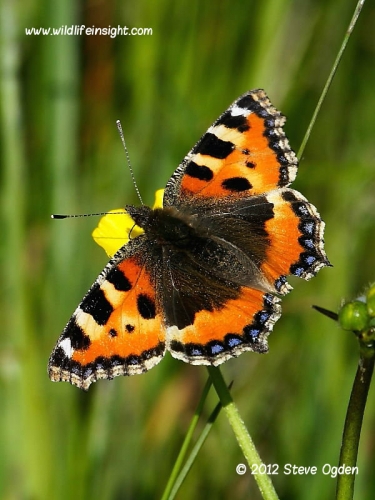 Identification of the Small Tortoiseshell

The Small Tortoiseshell Butterfly is unlikely to be confused with any other in the British Isles.

The similar Large Tortoiseshell is now extinct in the Uk, although occasional records do occur as a result of released captive breeding or immigrants from the continent.

Both sexes are alike with a wingspan of 50-56 mm. Females being slightly larger.

Aberrations do occur and it’s thought the form semi-ichnusoides, which has merging dark markings and a more washed out orange, is a result of the chrysalis stage taking place in high temperatures.

The adult butterflies are often seen nectaring on a wide variety of flowers and shrubs including dandelions, heathers, thistles and buddleias.

The Small Tortoiseshell has been recorded in every month of the year and hibernates as a butterfly.

The overwintering butterflies are one of the first butterflies to emerge from hibernation as early as February and March.

They are frequently found flapping at windows in buildings where the sun has prematurely raised the temperature. 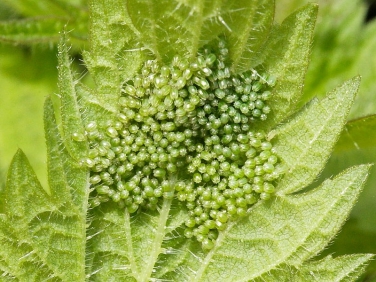 Eggs of the Small Tortoiseshell

Large clusters of several hundred green eggs are laid on the underside of fresh nettle leaves between April and May.

The eggs hatch within a few days depending on the temperature.

Other butterflies that lay eggs on nettle are the Peacock Butterfly, The Red Admiral Butterfly and Comma Butterfly. 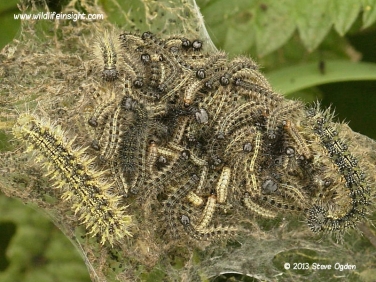 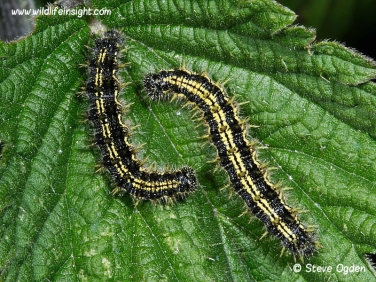 The caterpillars feed gregariously on nettle within a loose web until dispersing when nearly fully grown after about 21 days.

The brood are generally black at first but show a variation in colour as they grow, with some developing pale yellow lines down their sides and dorsal area while others remain mainly black.

The small clusters of short spines are mainly yellow.

At about 30mm the Small Tortoiseshell caterpillars are fully grown. 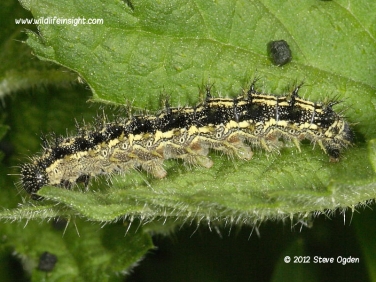 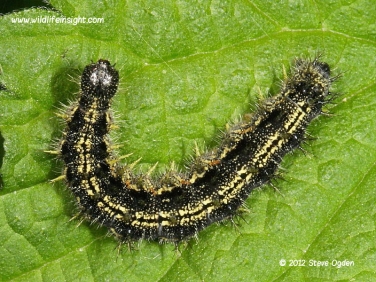 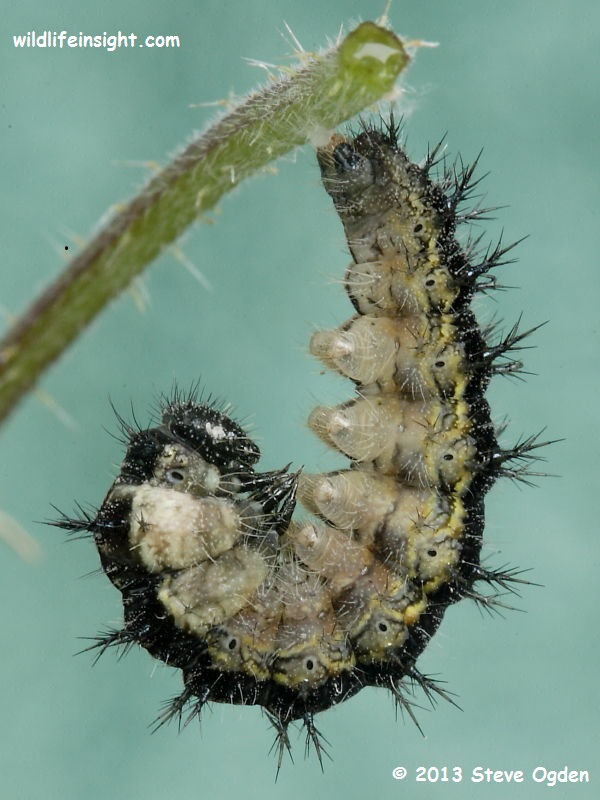 After about four weeks the caterpillars pupate, sometimes by hanging from nettle stems but more often wandering away from the larval foodplant to pupate on more stable structures such as fences, stone walls or the walls and ceilings of garden sheds.

To secure itself the caterpillar spins a silken pad onto the support into which it hooks its cremaster.

Once secure the caterpillar hangs down and turns into a chrysalis over a couple of days.

The chrysalis is variable in colour and beautifully cryptic, often resembling withered leaves.

The adult butterfly emerges in 10-14 days. 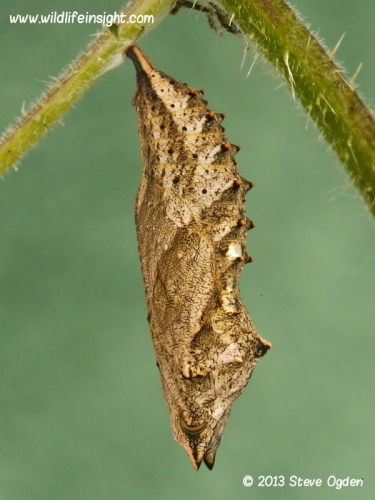 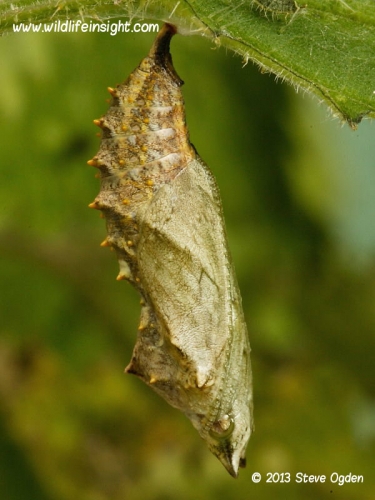 The second generation emerge between June and July and their offspring will over winter as an adult in a sheltered spot such as the crevice in the bark of a tree, a stone wall or inside a building.

The overwintering butterflies will fly as soon as it is warm enough and may often be found flapping at windows in houses where the sun has prematurely raised the temperature.

Parasites of the Small Tortoiseshell 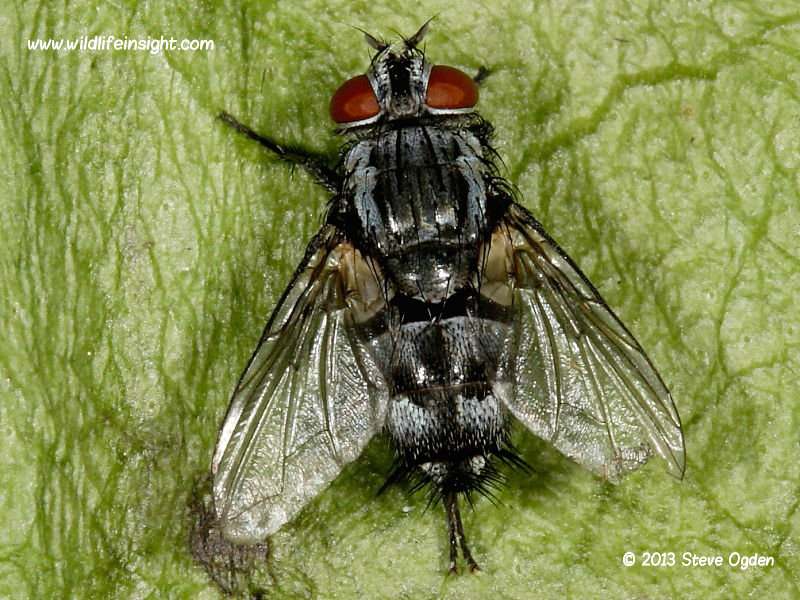 The Small Tortoiseshells recent decline is not fully understood, although loss of habitat, climate change and change in farming practices is thought to be partly responsible.

Much debate has also centered on the part played in the decline by the recent arrival in the British Isles of the parasitoid tachinid fly Sturmia bella whose larvae feed within the caterpillar before killing the host.

Although there are many other species of tachinid flies and wasps which are parasites of butterfly larvae this new parasitoid seems to have quickly become widespread throughout much of the British Isles at a time that has coincided with the decline in the Small Tortoiseshell Butterfly. A development, that may, of course, prove just to be a coincidence.

Given a chance nature often self regulates swings in insect populations so it must be hoped that a balance will soon be restored.

Those wishing to attract more Small Tortoiseshell butterflies to their garden should provide an area of nettles for the caterpillars, a wood pile for hibernating adults and a variety of all season flowering plants for the butterflies to feed on. 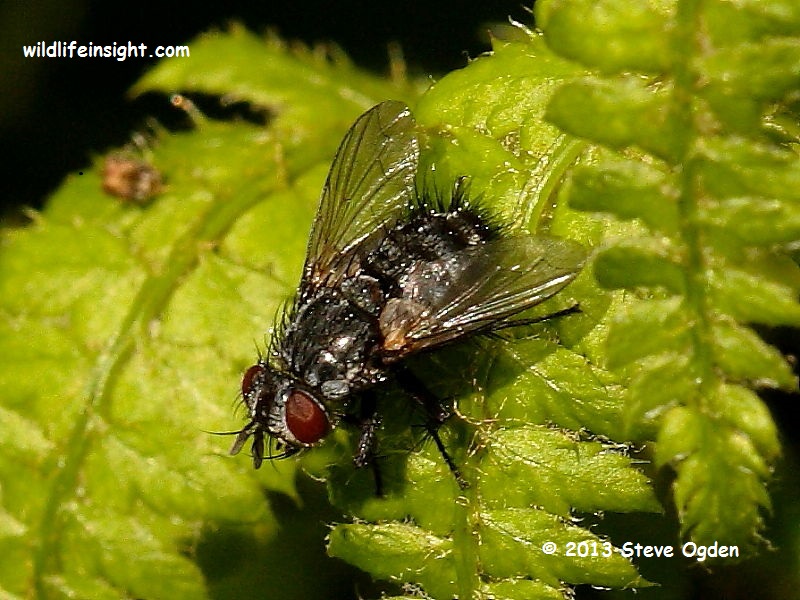 Please note that many of the parasites that prey on the larvae of butterflies and moths are difficult to identify in the field.

Those shown should only be used as examples of parasitoid tachinid flies.

Above left is likely to be the tachinid fly Bella sturmia which emerged from the pupa of a larva hosted by a Small Tortoiseshell caterpillar.

The photos left are of a tachinid fly – possibly Phryxe vulgaris, thought to be depositing eggs on nettle leaves supporting a web of Small Tortoiseshell caterpillars.

Also shown is a parasitoid wasp that also emerged from a pupa of a larva hosted by a Small Tortoiseshell caterpillar. 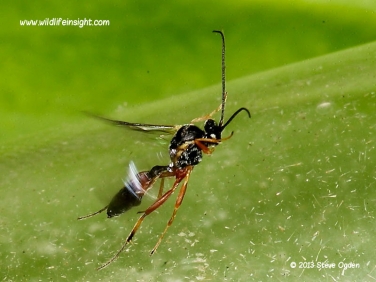 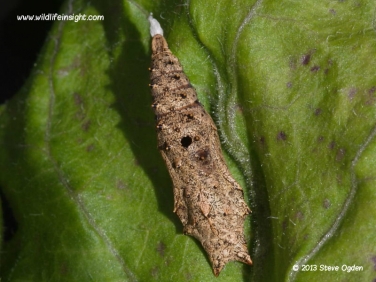