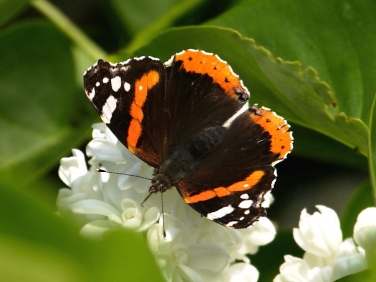 The Red Admiral Butterfly (Vanessa atalanta) is a strong flyer and regular migrant to the British Isles.

Due to its strong migratory instinct it’s found throughout much of the world including Europe, Asia and North America.

In the British Isles the butterflies are most numerous when breeding successes in North Africa and southern Europe coincide with favourable southerly air streams from the continent.

The butterfly is commonly found nectaring in gardens on flowers such as buddleia, hebes, heathers, sedums, bramble and Ivy (Hedera helix).

Ivy is a particularly important food source in the autumn for those preparing to migrate south and for the few that may attempt to overwinter. 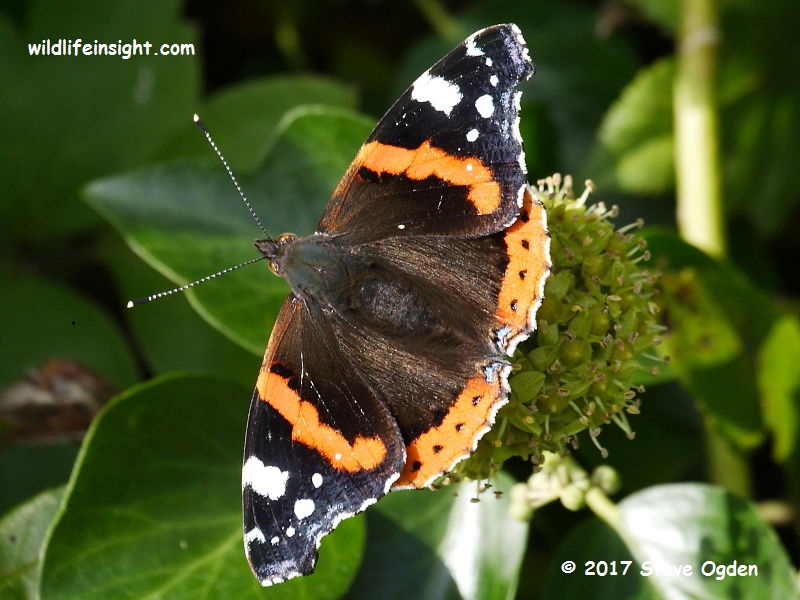 In northern parts of its world range the Red Admiral butterfly is unable to survive the cold winters.

However, in recent years, in milder southern regions of the UK both adults and caterpillars are increasingly being recorded overwintering.

More information on the Red Admiral Butterfly in Cornwall is featured below. 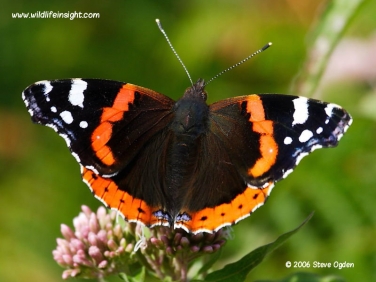 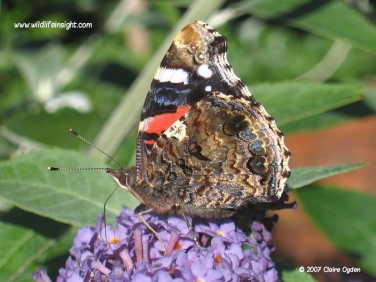 Identification of the Red Admiral butterfly

The Red Admiral is unlikely to be mistaken for any other butterfly in the British Isles.

Both males and females have a wingspan of about 55 mm and look alike.

When resting or nectaring with wings open the bold red and white markings set against a black ground colour make it a striking insect. 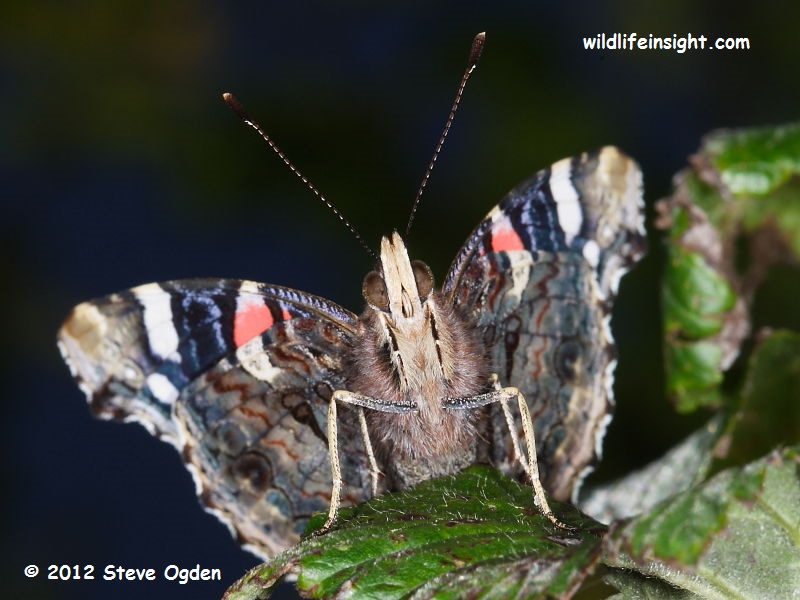 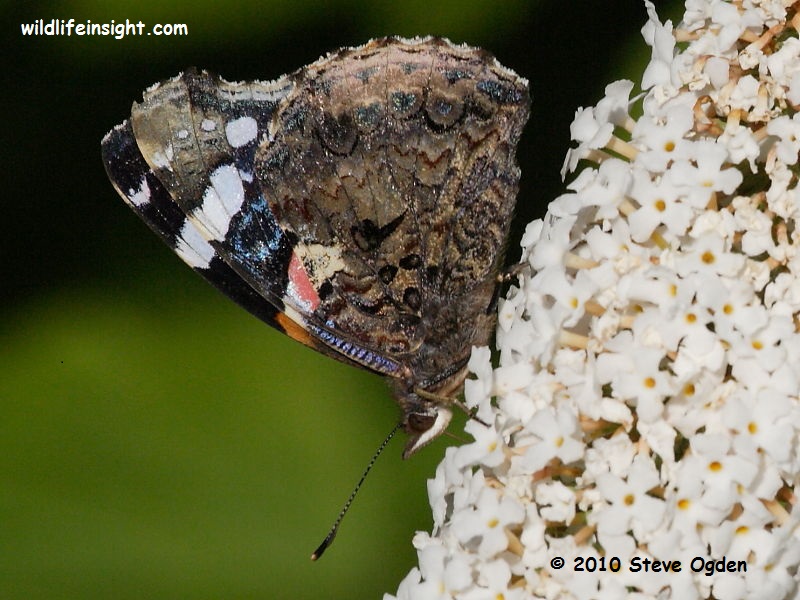 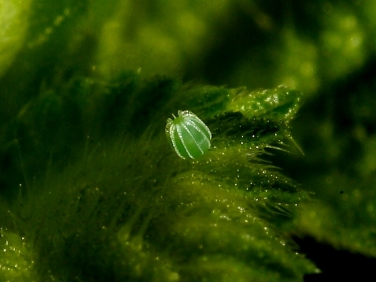 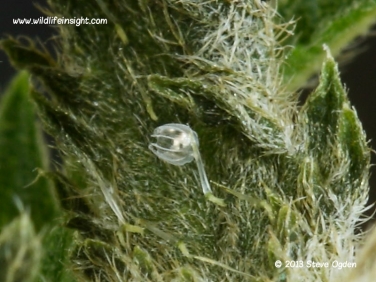 Migrant Red Admirals start arriving in the British Isles from the continent in the Spring with numbers building throughout the summer and early Autumn when weather systems are favourable.

Later in the year numbers will also be increased by the offspring of earlier arrivals.

Interestingly, sightings of the butterfly mating in the British Isles appear to be rare.

The females lay single green eggs on the upper side of the leaves of the larval foodplants – Common Nettle, Small Nettle, Pellitory-of-the-wall and Hop. 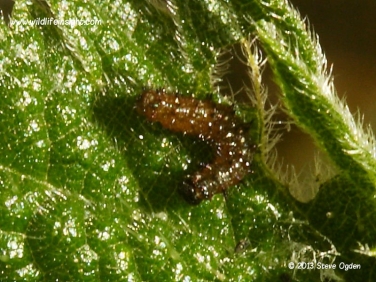 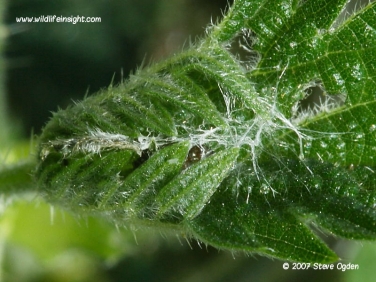 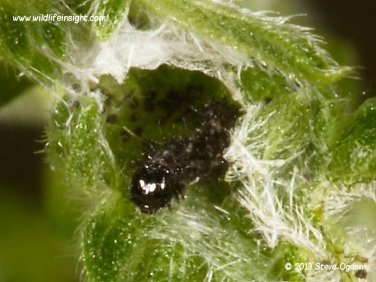 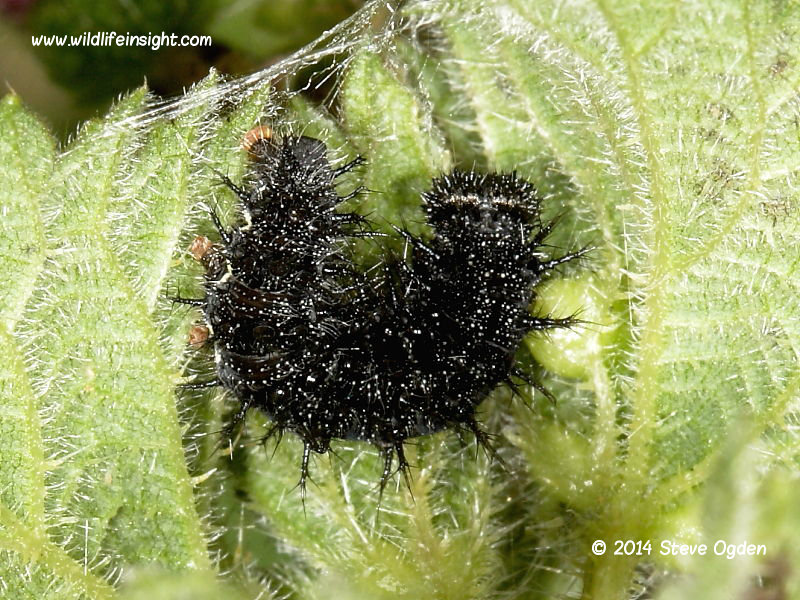 The caterpillars hatch in 7-10 days depending on temperature and are about 3 mm long and dark brown.

The larvae construct protective tents by folding together the leaves of the foodplant and securing with a spun silk thread.

These are most obvious on nettles and easily identified from the leaf rolls of common moth caterpillars such as The Mother of Pearl.
British butterfly caterpillars 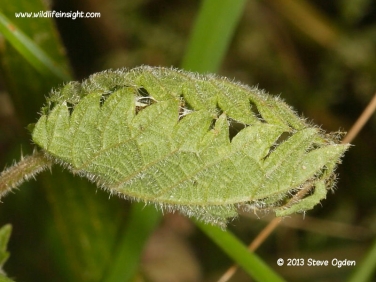 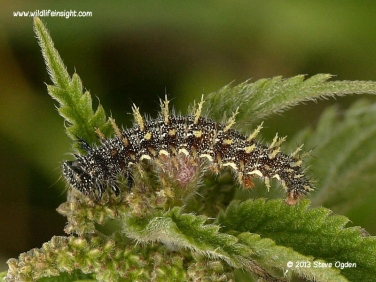 The size of leaf used to construct the tent increases to accommodate the growing caterpillar.

Growth rates are determined by temperature but in normal summer temperatures the caterpillars are fully grown within a month. 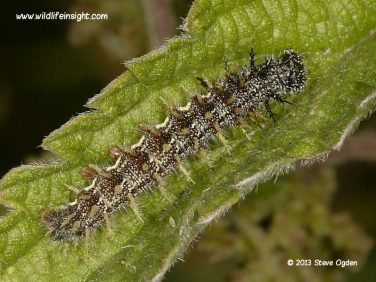 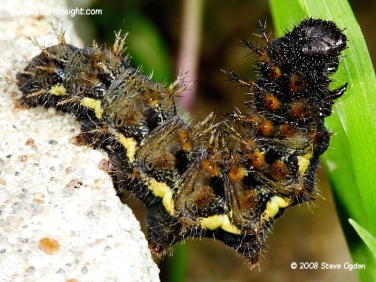 The fully grown caterpillar is about 50mm long and variable in colour. Most commonly it’s grey and black with a wavy, pale yellow line just below the spiracles and variably coloured hair spikes protruding from pale yellow/light brown pinaculae.

A much paler form commonly occurs with yellow hair spikes with variable grey and white mottling – as shown below. 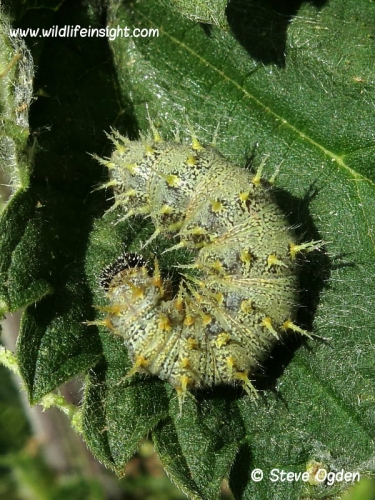 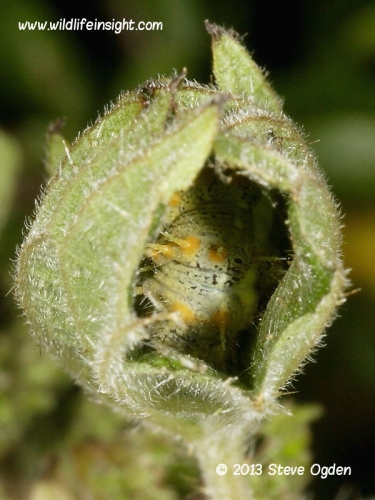 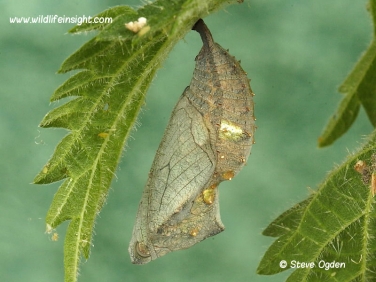 Pupation most frequently occurs within its final leaf wrap – the chrysalis shown right has had its leaf ‘tent’ removed.

The prepupating caterpillars may also be encountered wandering away from the larval food source.

The butterfly emerges within 2-3 weeks and if weather conditions are favourable may go on to produce another brood.

In the Autumn the main population attempts to fly south to the continent. 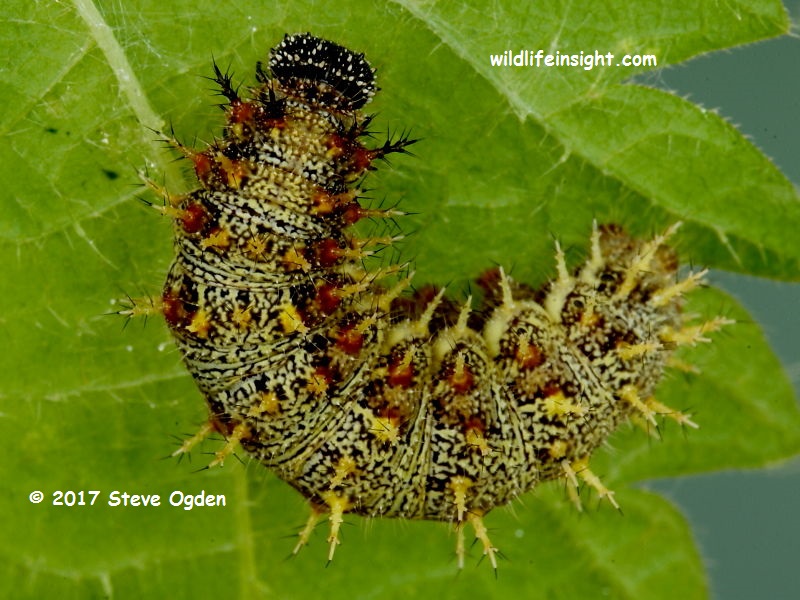 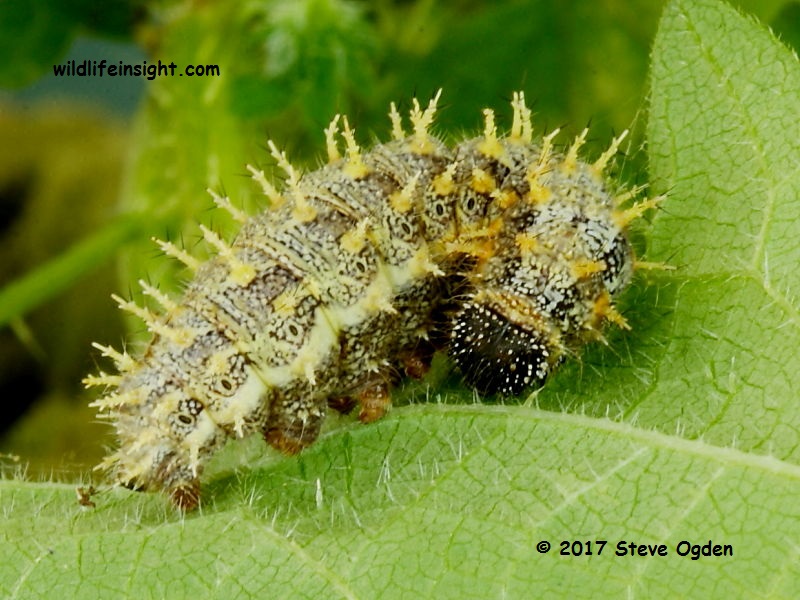 The Red Admiral Butterfly is a common species in south west Cornwall where I live. At times it’s the most abundant species to be seen in the garden and on coastal walks.

Although they may be recorded in every month of the year numbers are often greatest in September and October when dozens may be seen nectaring on flowering winter heathers and ivy flowers.

These large numbers are likely to be made up of a mix of late arriving migrants, the offspring of summer arrivals and butterflies stopping off to refuel prior to crossing the English Channel during their southerly migration. 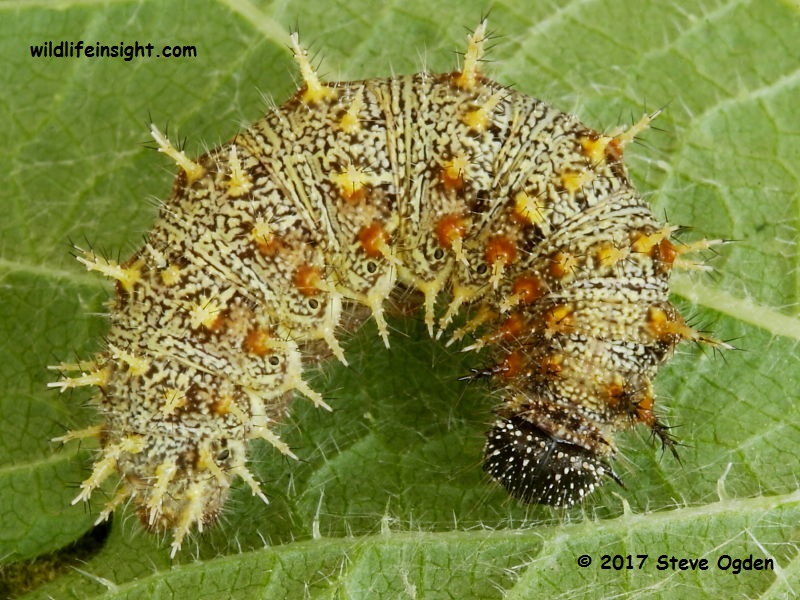 My own feeling is that a high proportion of these butterflies in coastal areas of south west of Cornwall at this time of year are recently emerged butterflies from earlier arrivals.

Certainly, large numbers of Red Admiral larval ‘tents’ are often conspicuous in nettle beds during the Summer and early Autumn.

However, it wasn’t until I began sweeping Pellitory on the Wall for Bloxworth Snout larvae that I was surprised to also record large numbers of Red Admiral caterpillars.

In areas where both Common Nettle and Pellitory of the Wall were present often many more caterpillars were found on the latter foodplant. 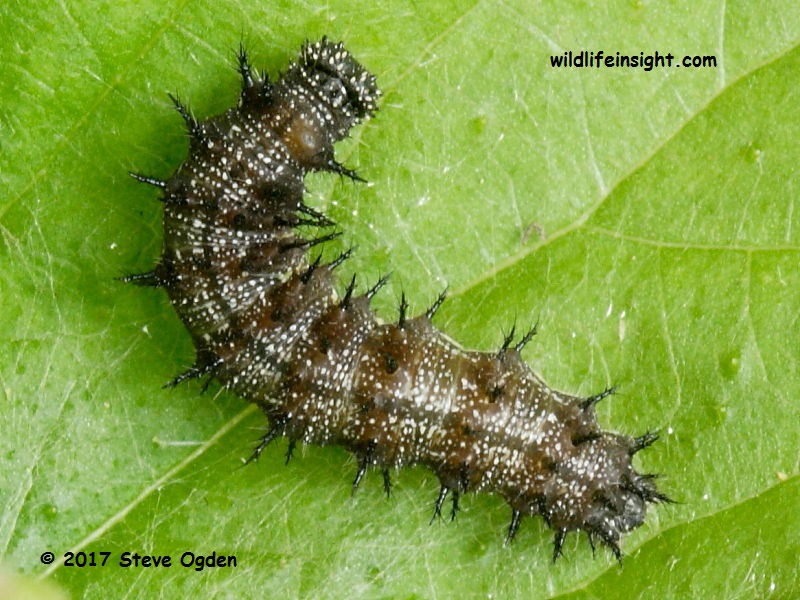 More surveying may demonstrate that in some coastal areas in South West Cornwall where Pellitory-of-the-Wall is abundant it may even be the principal larval foodplant.

The images of caterpillars featured are some of the different coloured forms swept from Pellitory-of-the-Wall on a coastal hedgerow near Falmouth in Cornwall during September. 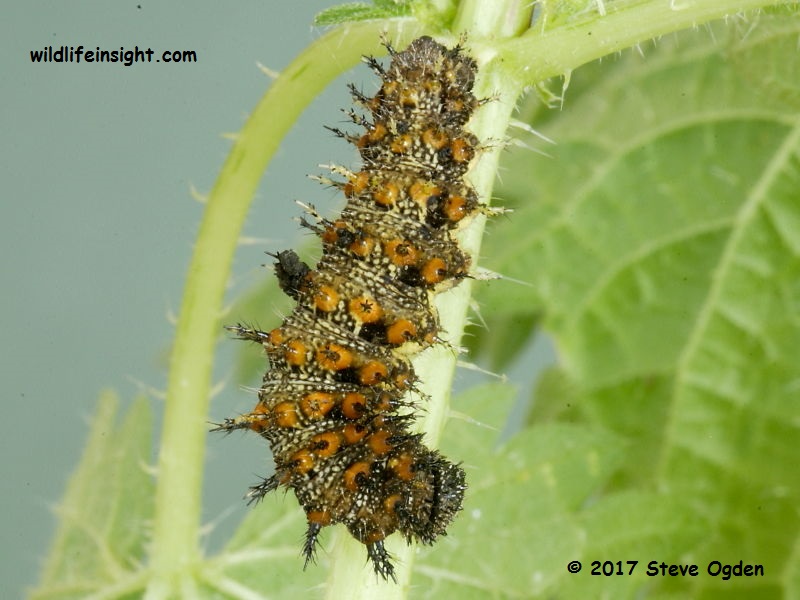 Overwintering of both Red Admiral caterpillars and butterflies also appears to be on the increase in this part of Cornwall.

Increasing numbers of Red Admiral butterflies have been recorded both in flight and hibernating in stone walls, outbuildings, and wood piles during the winter months.

Caterpillars have been recorded in every month.

Some of the images above are of caterpillars in various instars recorded during the winter on the Lizard Peninsular and in fields alongside the sheltered river estuaries of the Fal and Helford Estuaries. Although these caterpillars are slow growing during the cold months they do seem to be able survive the frost free winters.

A Cornwall Butterfly Atlas – Wacher, Worth and Spalding