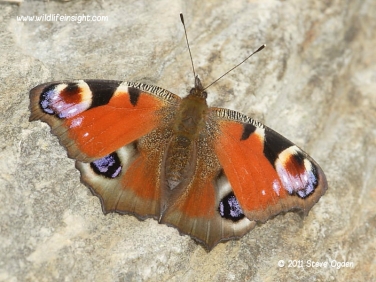 The Peacock Butterfly, Inachis io, is one of the most beautiful butterflies in the world.

It is distributed throughout much of the British Isles and Europe where it can be found in a wide variety of habitats including open countryside, urban gardens and wooded glades.

Although widespread the butterfly is normally only seen in small numbers. 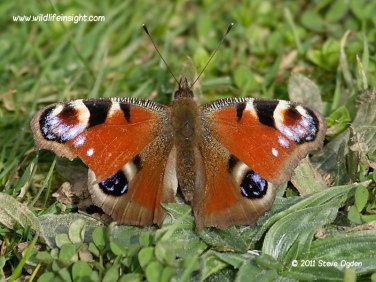 Both males and females are alike with a wingspan of about 55mm, the females being slightly larger than the males.

The butterflies are normally easily identified by the large ‘eyes’ on both forewings and hindwings but rare sightings of ‘blind’ specimens, lacking the eye like markings, do occur.

Other butterflies commonly seen in gardens are The Red Admiral, The Small Tortoiseshell, The Comma, The Painted Lady, The large White, The Small White and Green-veined White. 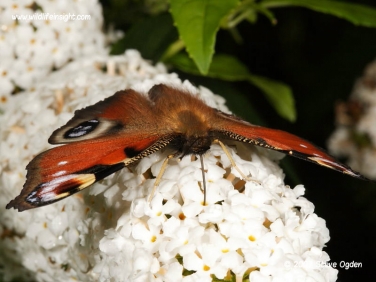 Single or small numbers of butterflies will hibernate together with wings closed.

When a hibernating Peacock Butterfly is disturbed,  it will open and close its wings, causing a rustling sound. The revealed ‘large eyes’ are thought to imitate a much bigger and more aggressive animal.

Despite this defensive posture overwintering butterflies are still vulnerable to predation by mice and birds..

Other hibernating butterflies found in the British Isles

These include The Comma, The Red Admiral, The Small Tortoiseshell and The Brimstone.

Hibernating Peacock Butterflies are one of the earliest species to be seen in the spring.

Those hibernating in buildings heated by the sun may prematurely emerge resulting in flight records as early as January. 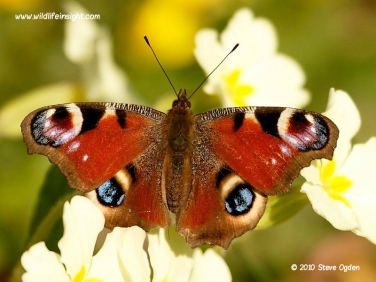 The males are strongly territorial and will often sit on a bare piece of soil soaking up the sun before taking off to ‘check out’ another passing butterfly or large insect.

The butterflies feed on a wide range of flowers and are frequently seen in gardens nectaring on buddleia.

The Peacock Butterfly is mostly single brooded but smaller second broods have been recorded during warm summers in southern counties such as Cornwall.

Females lay large clusters of as many as 500 green eggs on the leaves of nettle – the larval foodplant. 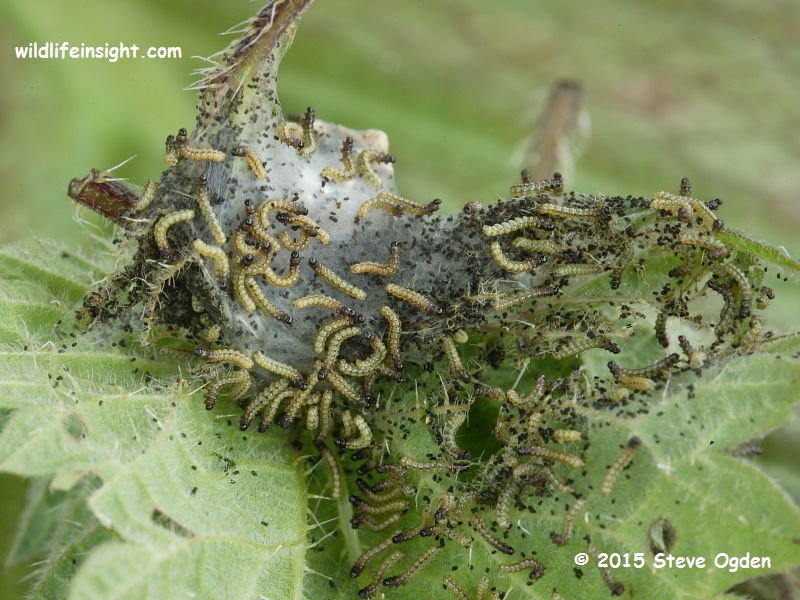 The larval foodplant of the Peacock Butterfly caterpillar is Common Nettle (Urtica dioica) also known as the Stinging Nettle.

As they grow they move together, from one nettle to another.

Most are fully grown in about a month and disperse over a wider area.

Many Peacock Butterfly caterpillars are heavily parasitised by species of tachinid fly. 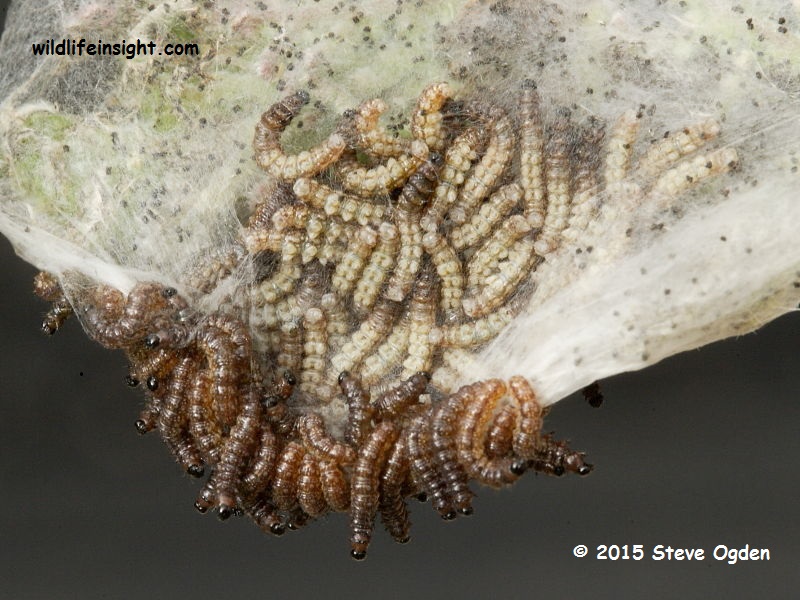 Nettles are an important larval foodplant for many butterflies and moths.

Other butterfly caterpillars commonly found on nettle are the Small Tortoiseshell, Red Admiral and Comma.

Moth caterpillars commonly found on nettle leaves include The Scarlet Tiger, The Snout, The Silver Y, The Mother of Pearl and The Small Magpie Moth. 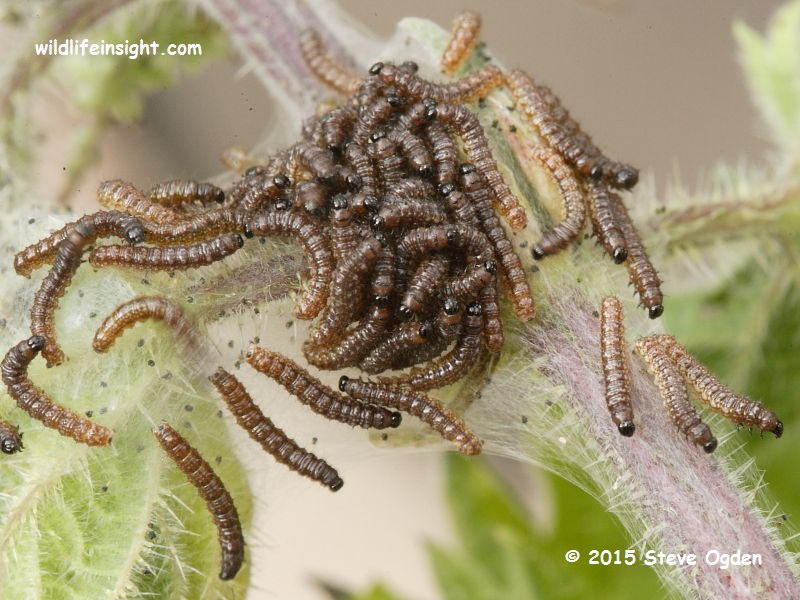 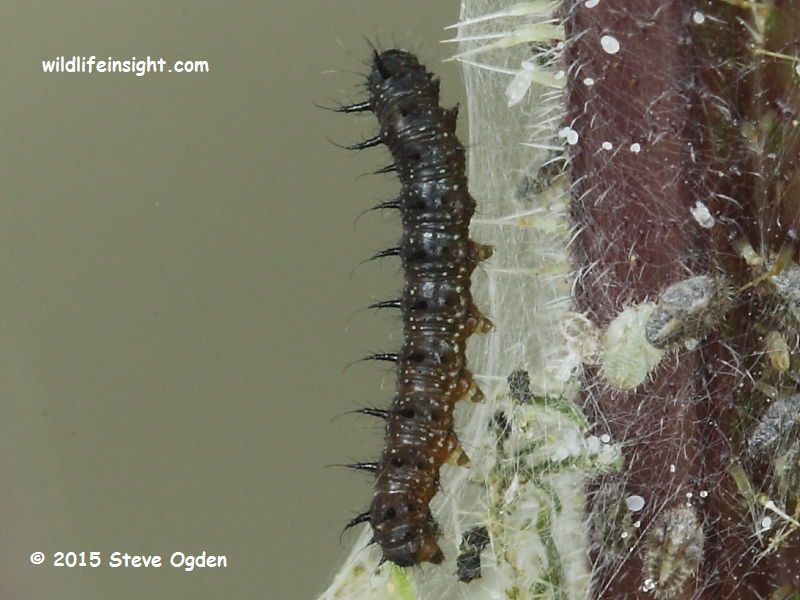 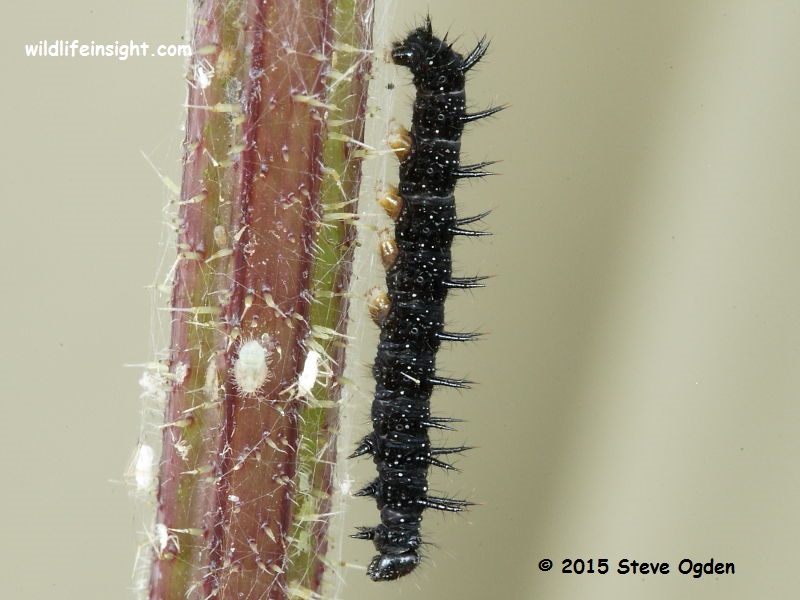 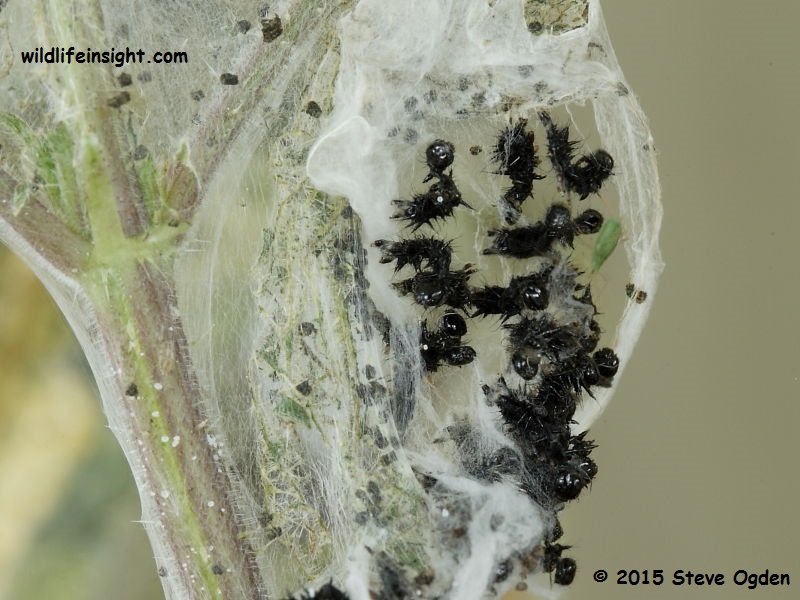 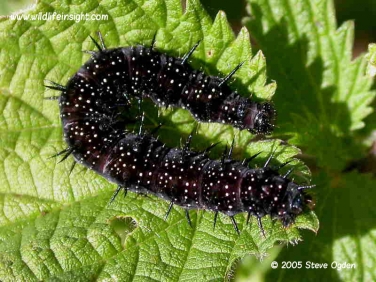 The true legs are black and the prolegs ochreous. 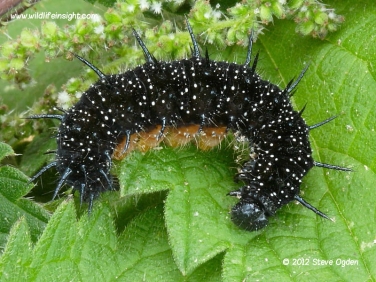 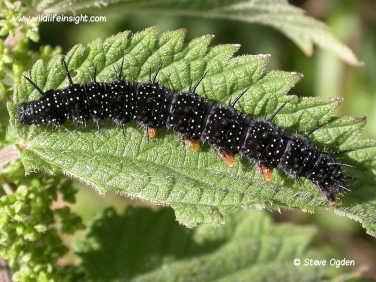 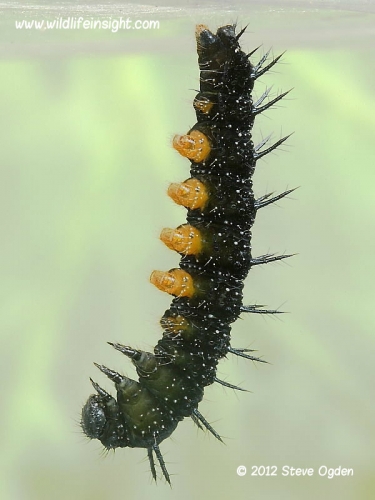 The pupating caterpillar forms a chysalis by securing its cremaster to a silk pad spun onto a suitable support such as a plant stem or nearby structure.

The remains of its discarded skin often remains visible on the chrysalis.

The newly formed chrysalis may be pale green or dark grey to reflect the colour of the leaves, plant stem or other surroundings.

The butterfly emerges in about 2 weeks.

The caterpillars are easy to rear but should be provided with a mesh over the top of the rearing container or suitable twigs to pupate from. 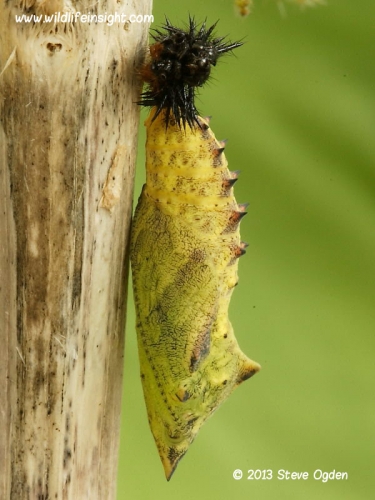 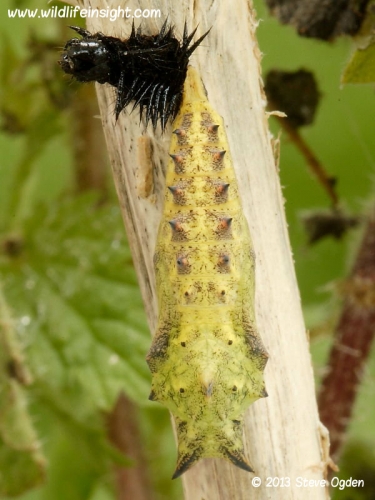