Introduction to the Meadow Brown Butterfly and caterpillar 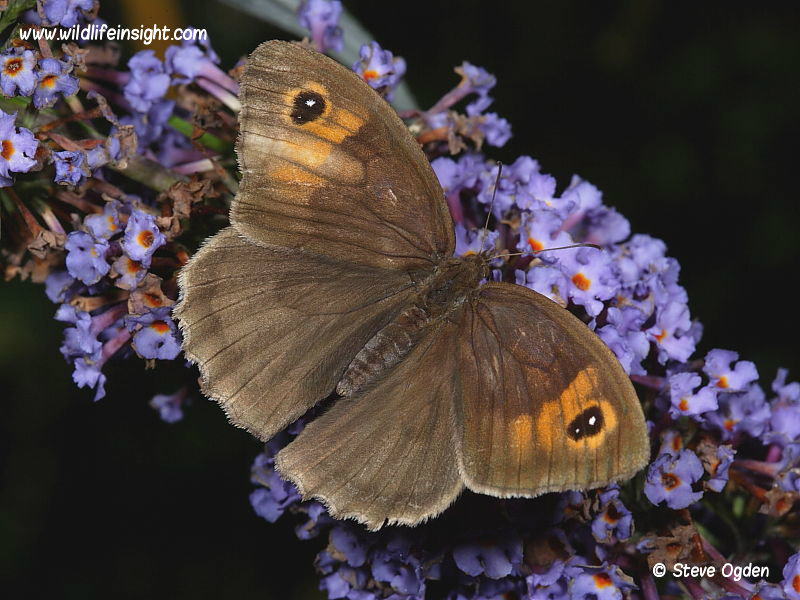 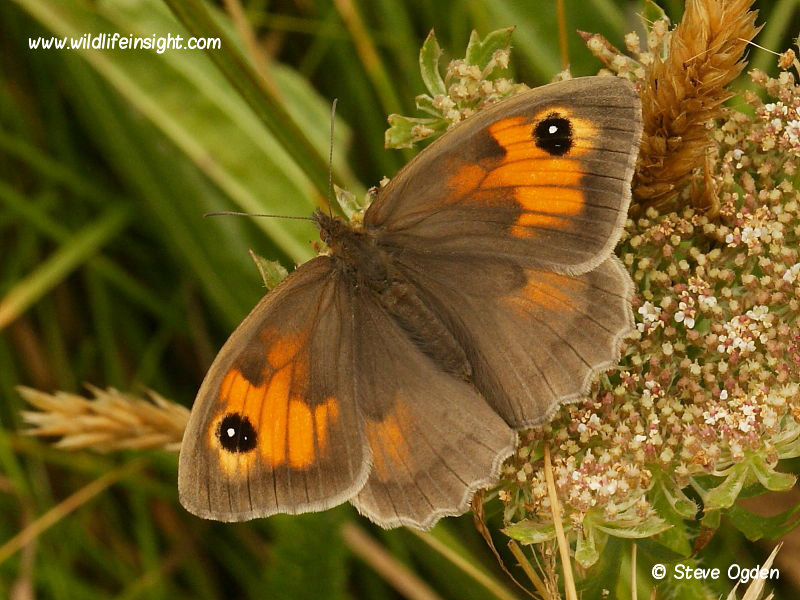 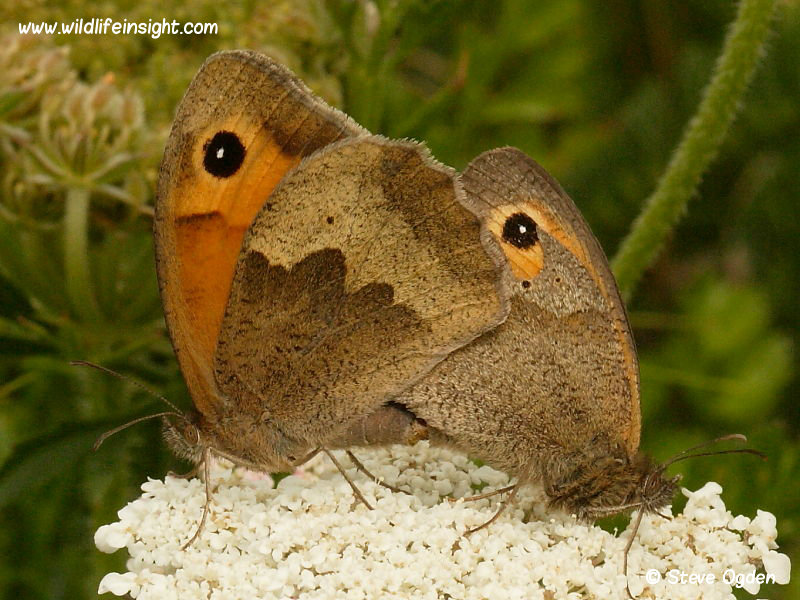 The Meadow Brown butterfly is one of the most common species throughout much of the British Isles and Europe, as far south as North Africa.

The species is most common in unimproved countryside where the larval foodplants of a variety of grasses is plentiful. These areas include open grasslands, coastal dunes, hedgerows, woodland rides and urban wastelands.

The butterfly is generally thought to be single brooded but its protracted flight period from May to October has led to speculation that it may have partial second broods. 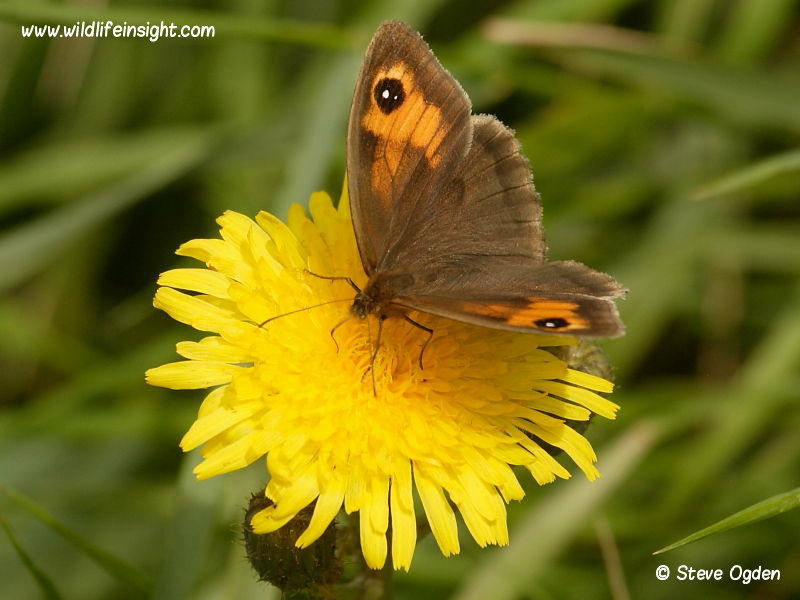 The Meadow Brown has a wingspan of between 50 and 55 mm.

Males are darker and slightly smaller than females.

The extent of brown, strength of orange and the number of dots on hindwings of both sexes can be variable.

Several subspecies occur which continues to cause much discussion. Here in Cornwall subspecies insularis occurs.

Butterflies are often seen nectaring on the flowers of a wide variety of plants. In particular, blackberry flowers in hedges bordering grassland provide a valuable nectar source. 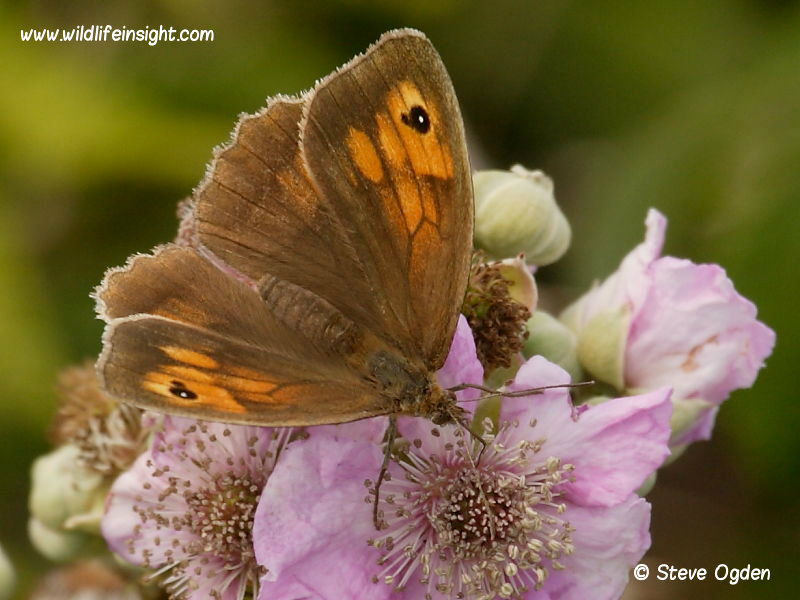 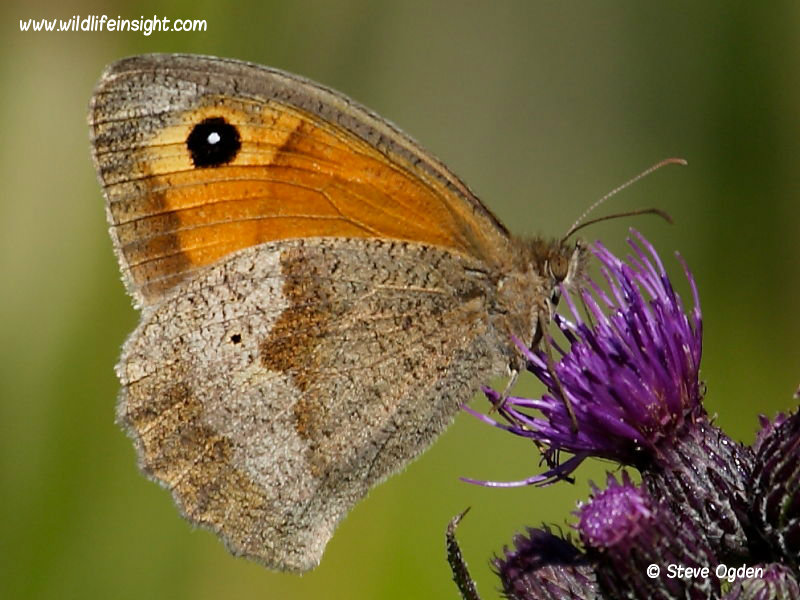 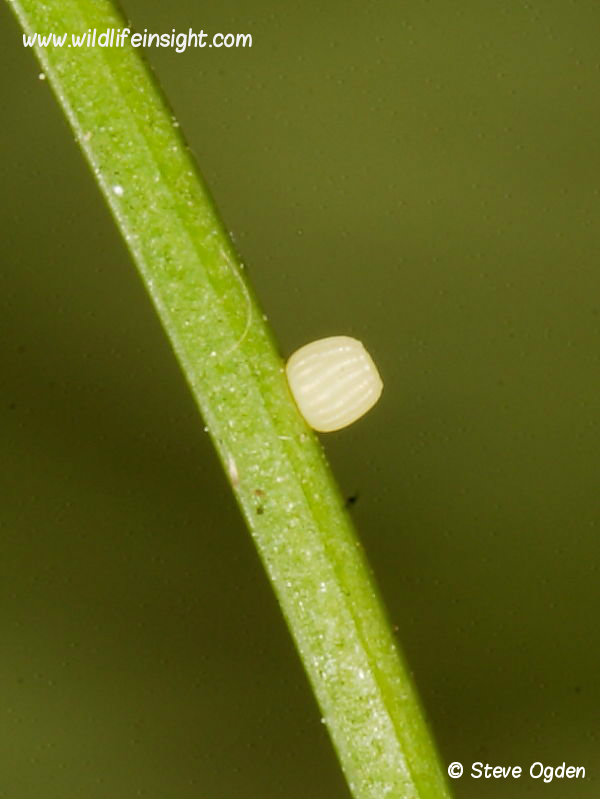 The Meadow Brown has a single brood with adults having an extended flight period. Butterflies emerge from late May and can still be seen as late as October.

The larval foodplants are a wide variety of grasses such as fescues, meadow grass, couch, cock’s-foot and false broom.

Eggs are laid either singly on the larval foodplant or dropped in flight.

The eggs are small, less that .5 mm in height, with over 20 longitudinal keels.

When fresh the eggs are a pale yellow but develop reddy/brown markings as they mature.

The most commonly seen blue butterfly in open countryside is The Common Blue. 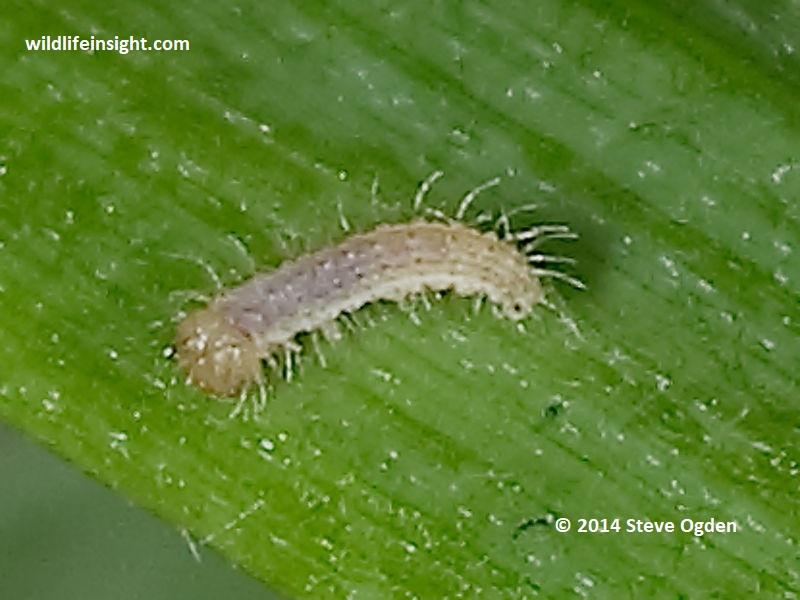 The caterpillars hatch in 2-3 weeks.

Day old caterpillars are about 1.5 mm in length, ocherous at first with pale hairs.

Other Butterfly caterpillars can be seen in the Butterfly Caterpillar Galleries and species pages.

Moth caterpillars can be seen in the Moth Caterpillar Galleries and species pages. 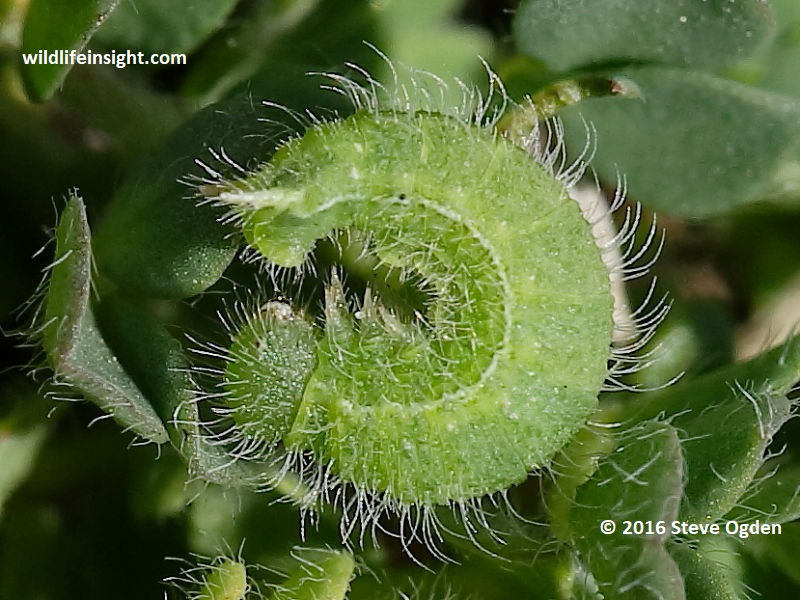 The caterpillars overwinter low down in the grasses and feed mostly at night during mild weather.

The caterpillars undergo 5 moults and are about 27 mm long when fully grown. 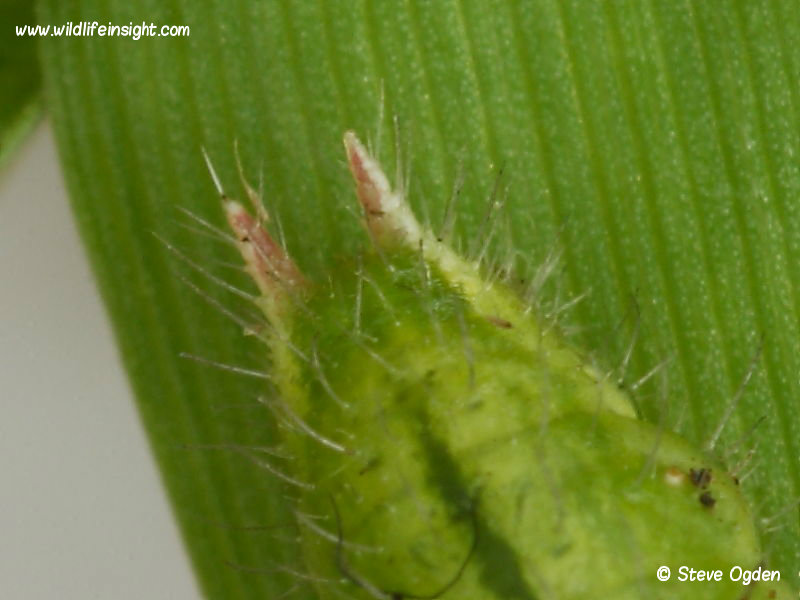 Growth rates are slow and variable with caterpillars being recorded in almost every moth of the year. This, coupled with a long flight period, has led to discussions over whether the Meadow Brown butterfly may have a partial second brood.

Above is featured an 8 mm long caterpillar found while searching for Silver-studded Blue caterpillars in the Penhale dunes on the north coast of south west Cornwall in mid May.

The image shown right is of a fully grown Meadow Brown caterpillar swept at night on May 5th in south west Cornwall. It seems likely that the butterflies resulting from these two different sized caterpillars would have emerged several weeks apart. 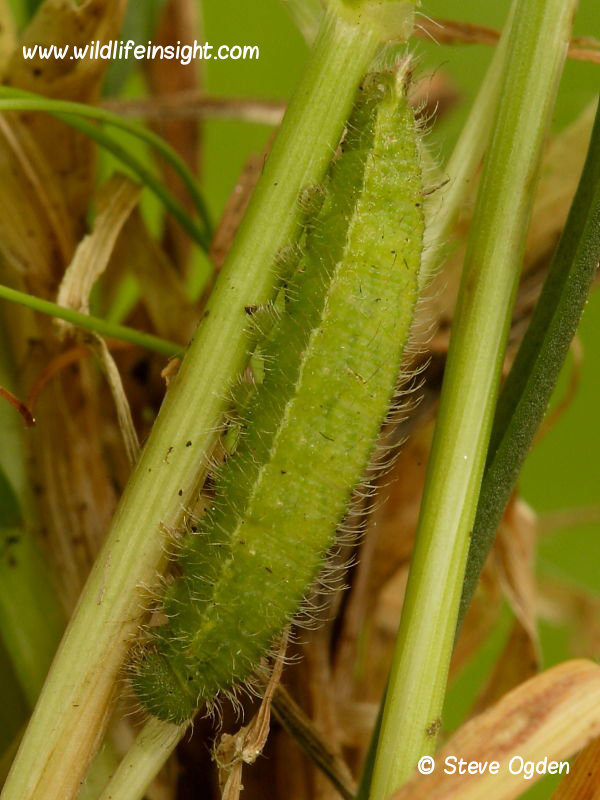 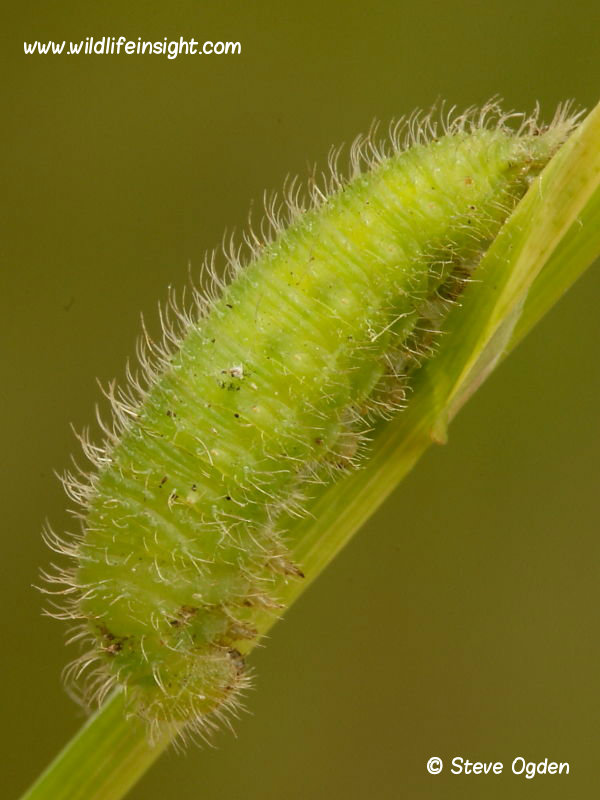 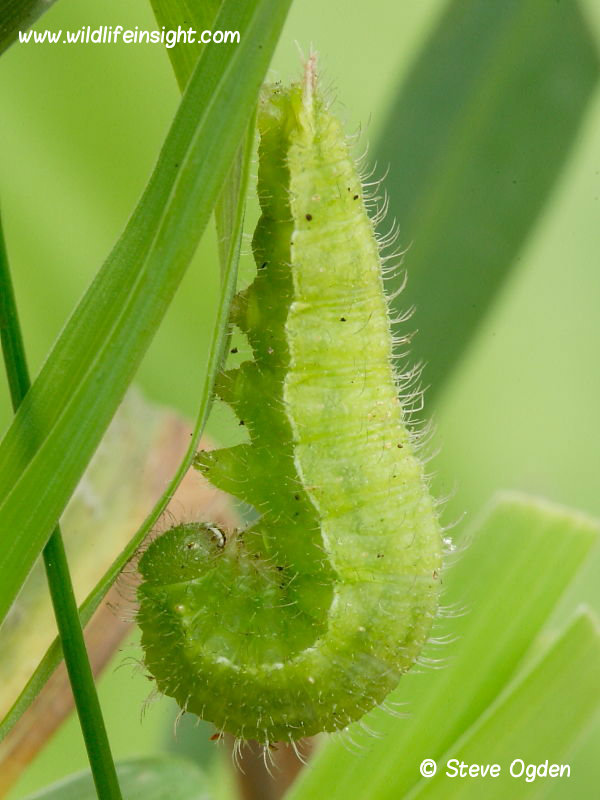 The chrysalis is about 15 mm long, pale green or green with black streaks and dots. The discarded skin of the caterpillar can be seen at the point of attachment.

The chrysalis is always green and hatches in 3-4 weeks. 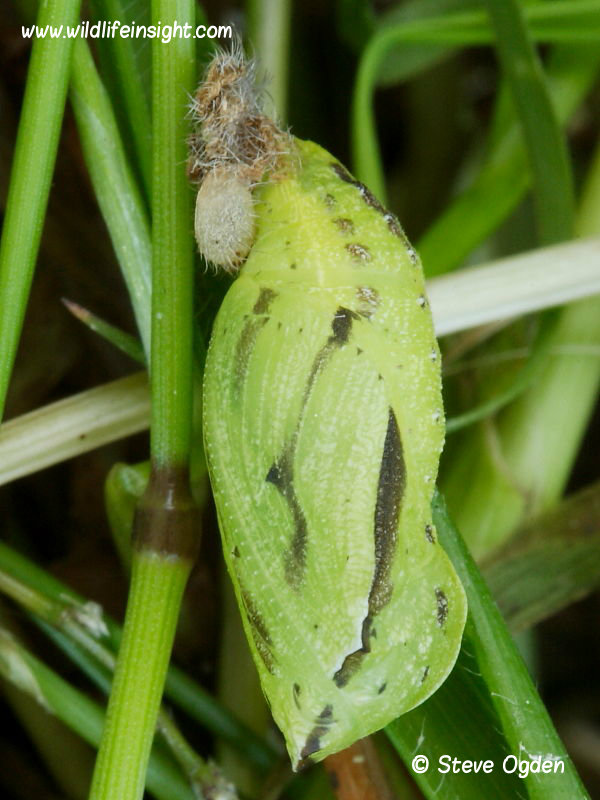 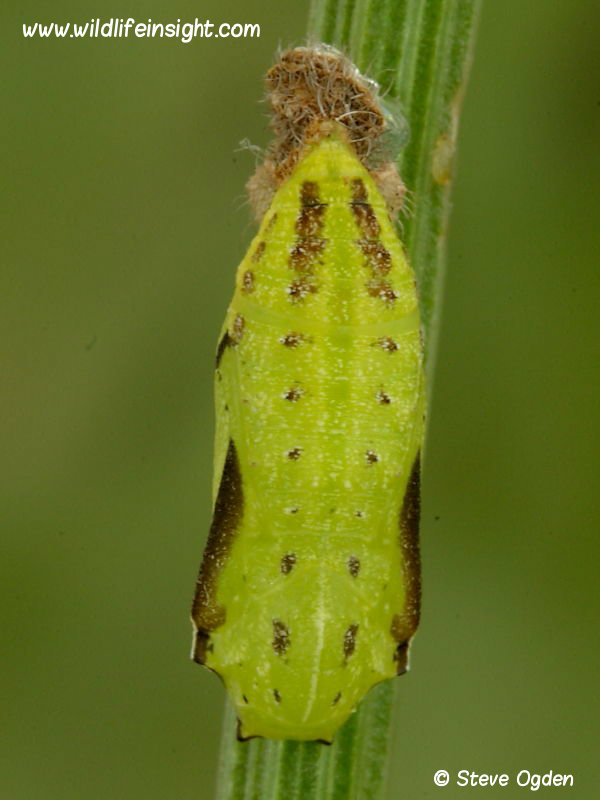