The Clouded Yellow Butterfly in Cornwall 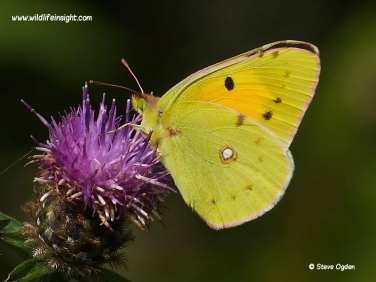 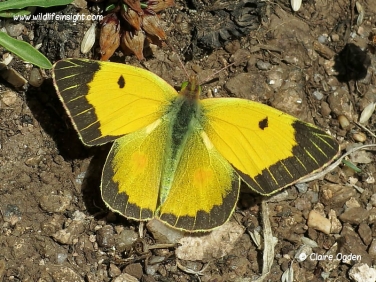 The Clouded Yellow butterfly is a beautiful migrant butterfly that we look forward to seeing every year here in the south west of Cornwall. Although seen annually numbers fluctuate wildly. In some years we’ll only see a handful and yet in others, as in the most recent years of 2006 and 2013, we have enjoyed the wonderful spectacle of hundreds flying over a single coastal field.
These ‘Clouded Yellow years’, as they are often referred to, coincide with warm summers, large broods abroad and winds emanating from Southern Europe and North Africa.

Indentification of the Clouded Yellow Butterfly 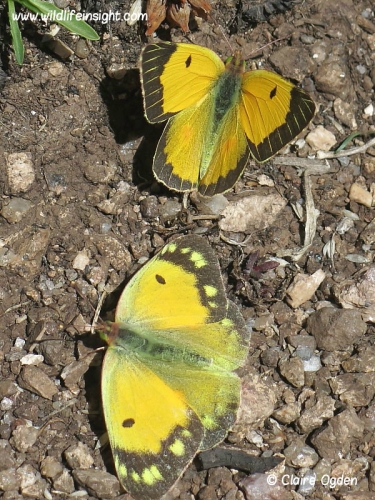 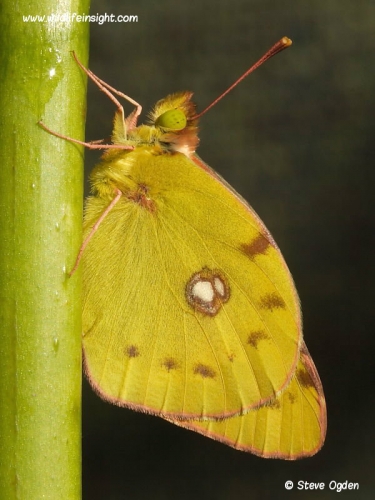 The one disappointing aspect about the Clouded Yellow is that it so rarely settles with wings open. Only once over many years
have we been fortunate to witness a courting pair with wings open.

Perhaps, but even more fortunately, we were able to grab the couple of photographs shown, taken on the cliff tops at Porthgwarra, a noted sea watching and bird migration site in south west Cornwall.

Despite its reluctance to settle with wings open it’s still recognisable from other butterflies commonly recorded in Cornwall and the rest of the British Isles.

However, the similar Berger’s Clouded Yellow and Pale Clouded Yellow which we have never managed to confirm a sighting of ourselves in Cornwall do require much closer examination to determine species. 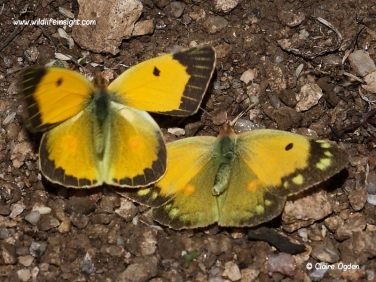 Both male and female Clouded Yellow butterflies have a large orange/yellow spot on the upperside of their hindwings and a single, fairly centralised black spot on their forewings.

The upperside of the male’s hind and forewings are a bold yellow with striking black borders dissected by fine yellow lines and
a fairly central black spot on the forewing.

While the upper sides of both the female’s fore and hindwings are often a paler yellow, sometimes much paler, with yellow spots in the black borders. 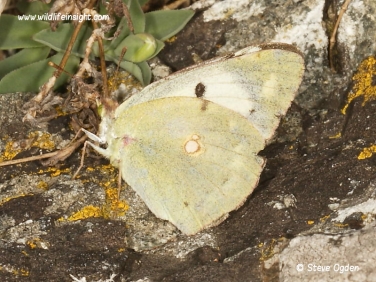 The strength of yellow is variable with some very pale specimens regularly sighted.

We frequently find it necessary to take a closer look at the the paler forms to distinguish from the pale, almost white, female Helice form that occur in small numbers.

Some paler specimens and in particular the female Helice form can be confused when flying at distance with ‘White Butterflies’.

Although, when closer views are had, we find the extensive black borders help identify even in flight

When settled with wings closed the undersides of Clouded Yellows are easily distinguishable from those of other butterflies likely to be seen in the British Isles.

The brown ringed white spots in the centre of the underside of the hind wing often form a figure of eight.

And the arc of brown and black spots towards the outer edge of the underside of both hind and forewings are also prominent features, although variations do occur.

The Clouded Yellow is a strong flier and we frequently see it battling winds on some of the most exposed coastal Cornish sites. Inland they are mostly seen in open countryside in rough grasslands and ungrazed fields. Although every year we usually have one or two visit the garden, but which generally only pause briefly to nectar on a flower before moving on. 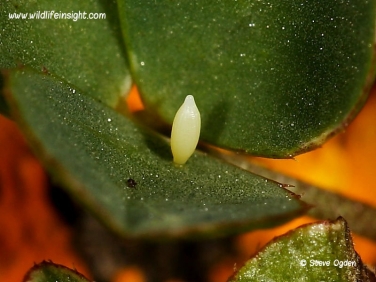 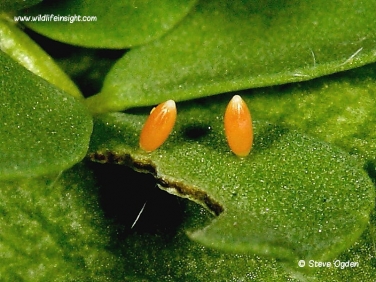 Eggs of the Clouded yellow Butterfly

Abroad in warm temperatures the butterflies are continuously brooded. Here in the south west of Cornwall the first butterflies normally arrive in late spring/early summer when females lay eggs singly on the upper side of the leaves of leguminous plants.

During the summer and Autumn it is not uncommon to see them laying on clovers and birds-foot trefoil along coastal strips.

The eggs shown above were laid by Helice forms on clover and birdsfoot trefoil on Rosemullion Head, in south west Cornwall.

They were reared through to see how many of the emerged butterflies would also be of the Helice female form. As it happened no Helice forms emerged from 10 reared butterflies, 4 of which were female. What can be deduced from such a small sampling is limited but may suggest that eggs laid by Helice forms of Clouded Yellows might still only result in a very small percentage of Helice offspring.

The single eggs are pale when first laid but change to orange within a few days and hatch within 10 days – dependant on temperature.

Caterpillars of the Clouded Yellow butterfly 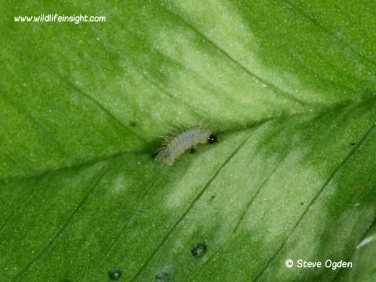 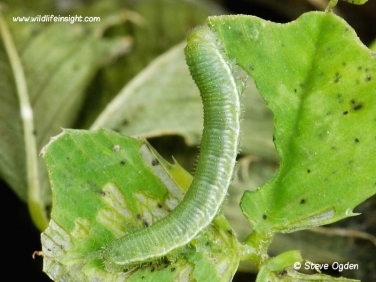 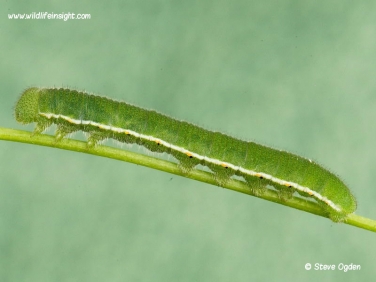 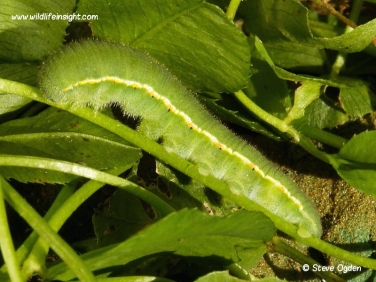 The images shown are of larvae reared inside during the trial.

The caterpillars were fed on clover and grew quickly, most being fully grown within 28 days.

In the wild they pupate by attaching their chrysalis by a silk girdle low down on a nearby plant stem.

In captivity several caterpillars secured themselves horizontally to the top of the cage netting.

The image of a chrysalis shown is of one lacking the securing girdle that had come adrift from the top of the rearing cage and had to be re-positioned.

The butterflies were reared in average temperatures of 18C but with peaks during the day of up to 30c and lows of 14c at night.

The adult butterflies emerged within 10 days. 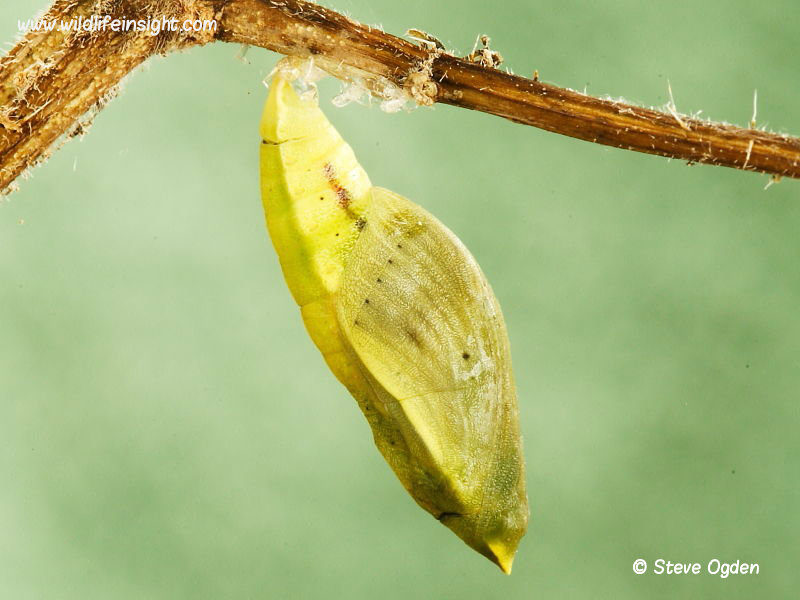 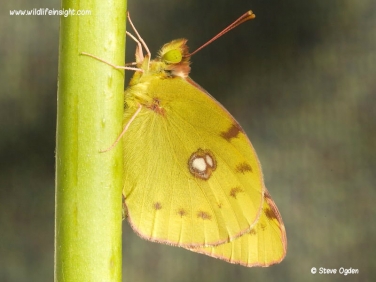 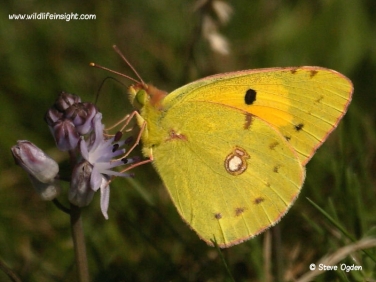 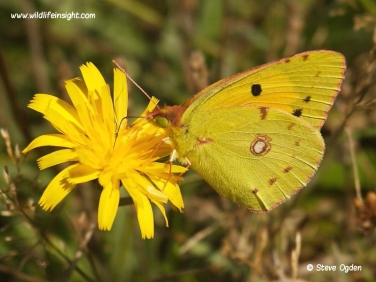 We see Butterflies nectaring on a wide variety of flower heads in the countryside and occasionally in our garden.

Purple headed flowers such as knapweed, thistles and coastal Autumn Squill are commonly visited as well as the flowers of many yellow composites.

Late flyers seem to have much less of a choice of nectaring flowers. We once saw over 200 in a single field alongside the Helford Estuary in late Autumn were they were restricted to nectaring on the few remaining yellow dandelion heads and yellow composites. 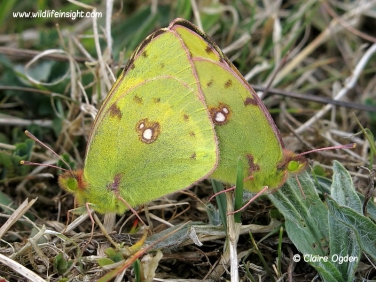 Survival and Overwintering of the Clouded Yellow Butterfly in Cornwall

Migrant butterflies arriving in late Summer/Autumn and those emerging from the broods of earlier arrivals will often pair and lay eggs. However, we have failed to find any surviving the colder months in any stage of their life cycle, even in the mildest parts of Cornwall.

However, in recent years, there have been occasional very early reports of Clouded Yellows before any signs of migration. This raises the possibility that some may have survived the recent milder winters, perhaps as either slow developing chrysalis or larva.

Most recently in 2014 Clouded Yellows were recorded in significant numbers in south west Cornwall during an exceptionally mild Autumn. Small numbers were still being recorded at the end of November. Whether this will result in some early Spring records in 2015 remains to be seen. The pair shown right were recorded in a field alongside the Helford Estuary in November 2014.

And in recent years we’ve found the over wintering caterpillars of another migrant butterfly, the Red Admiral, in two sheltered spots in Cornwall so maybe with warming winters a few Clouded Yellow may be able to survive in the future. Having another dash of yellow alongside the early flying Brimstone Butterfly brightening up the spring days would certainly be welcomed.

These are our observations and may differ from those of others, but hopefully by sharing them they may contribute to the general understanding of these fascinating butterflies.

We recommend and use the following wildlife reference books