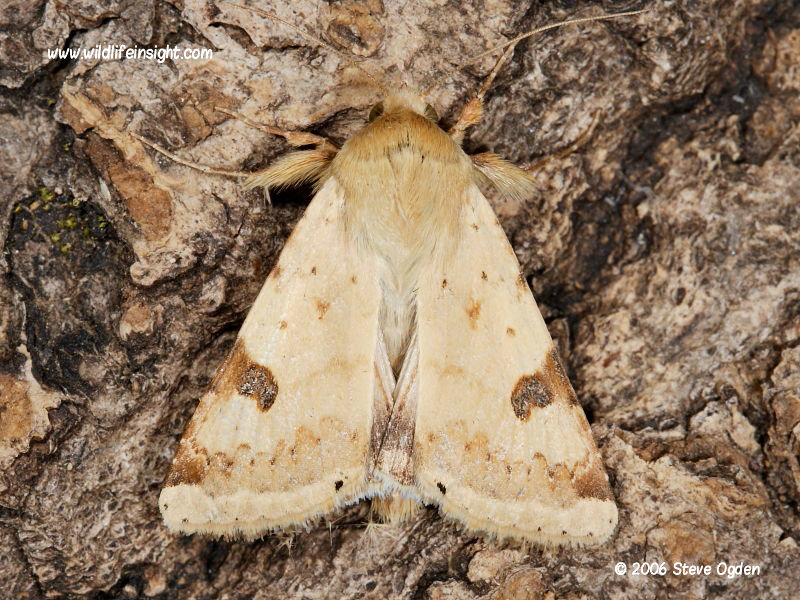 The Bordered Straw is an annual migrant moth to the British Isles from southern Europe and North Africa.

Numbers arriving are variable and influenced by weather systems and population sizes abroad where it can be continuously brooded.

Caterpillars from eggs laid by summer arrivals can successively develop in the warmer south to produce another generation but are unable to survive the winter.

In some countries the caterpillars are pests of agricultural crops

Caterpillars may accidentally be imported into the UK on produce such as cultivated flowers. 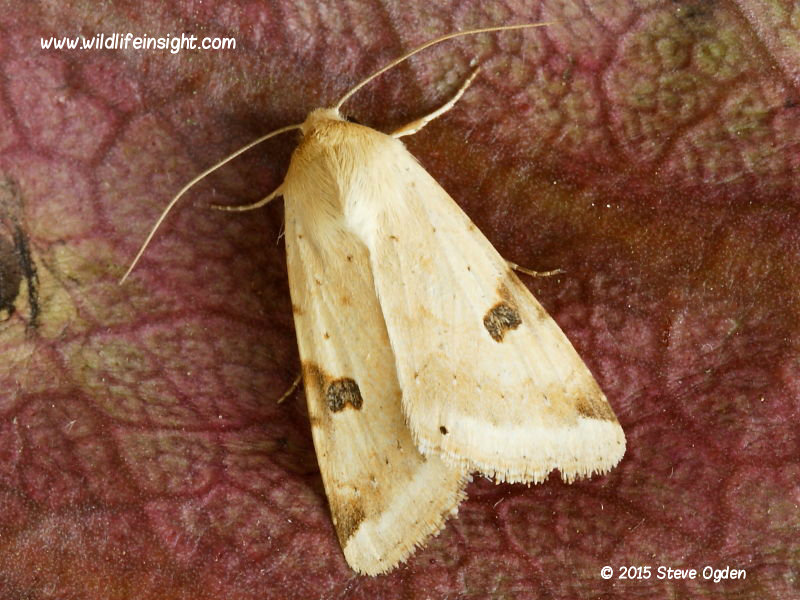 The adult moth has a forewing length of about 18mm and is easily identified by its light straw colouring and dark grey kidney mark.

Moths developed under high temperatures tend to be paler.

The Scarce Bordered Straw, of the same Heliothinae noctuid family of moths, is also an annual migrant to the British Isles and has caterpillars that are also frequently found on imported cut flowers. 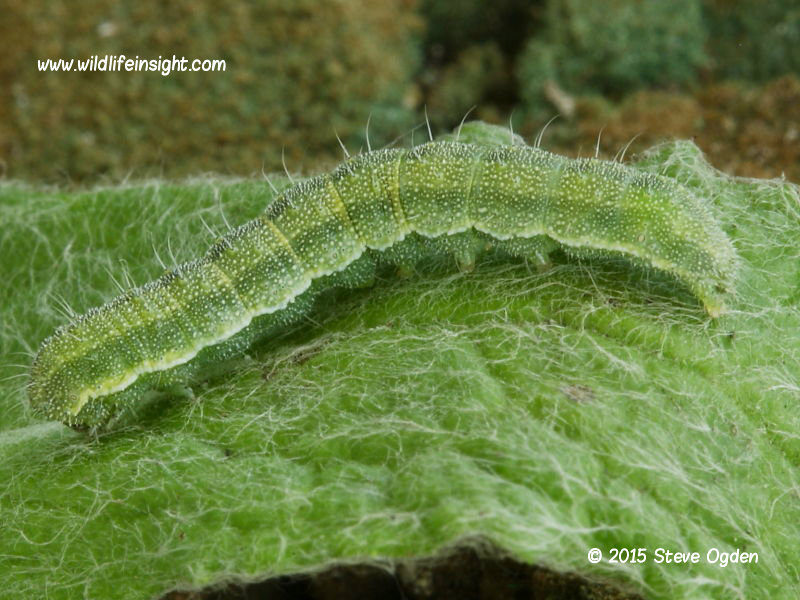 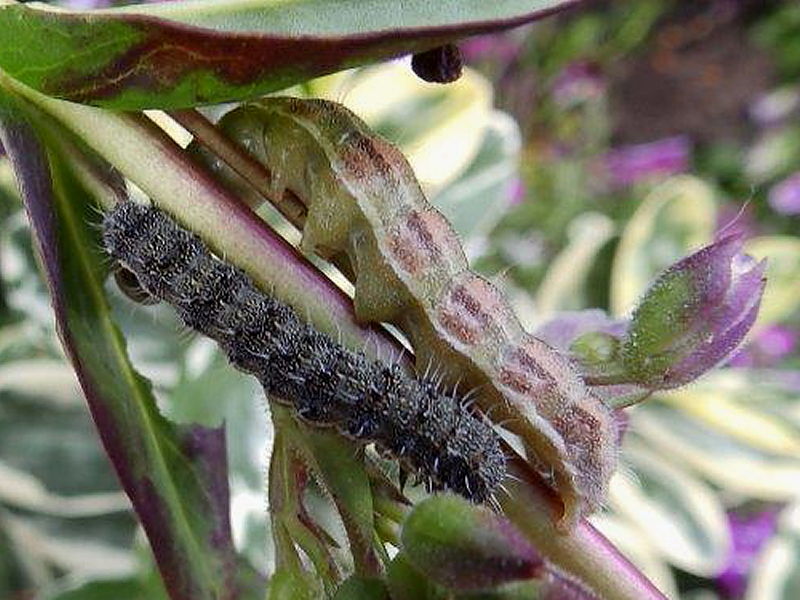 The caterpillars are 35mm-38mm in length and vary greatly in colour, with green, pink banded and darker forms of caterpillars commonly recorded.

Although variable in colour the tiny white pinaculars are usually easily discernible as a light freckling over much of the body even on early instars.

The heads are normally green with some variable darker mottling.

The photo of a pink banded and dark Bordered Straw caterpillar feeding on Penstemons was taken by Jeff Farley in his garden in Chard, Somerset.

Other moth caterpillars can be seen in the Moth Caterpillar Galleries

Life-cycle of the Bordered Straw moth 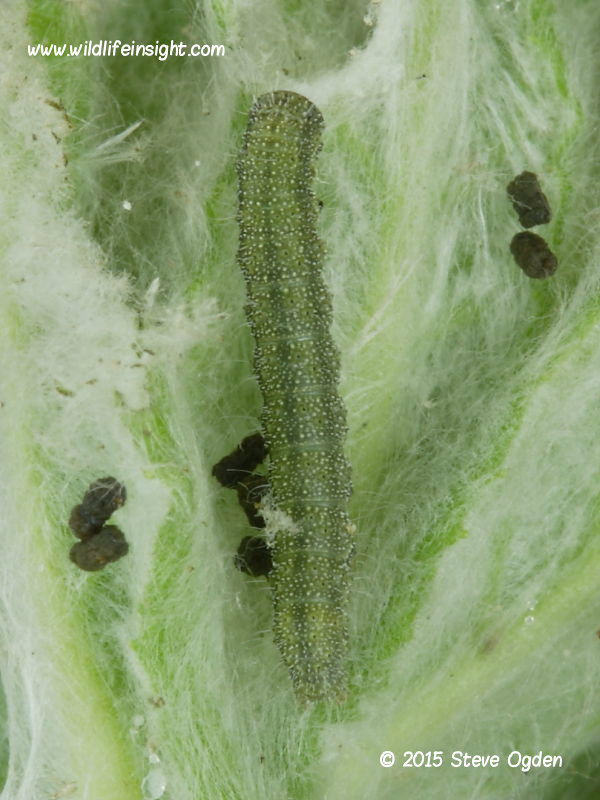 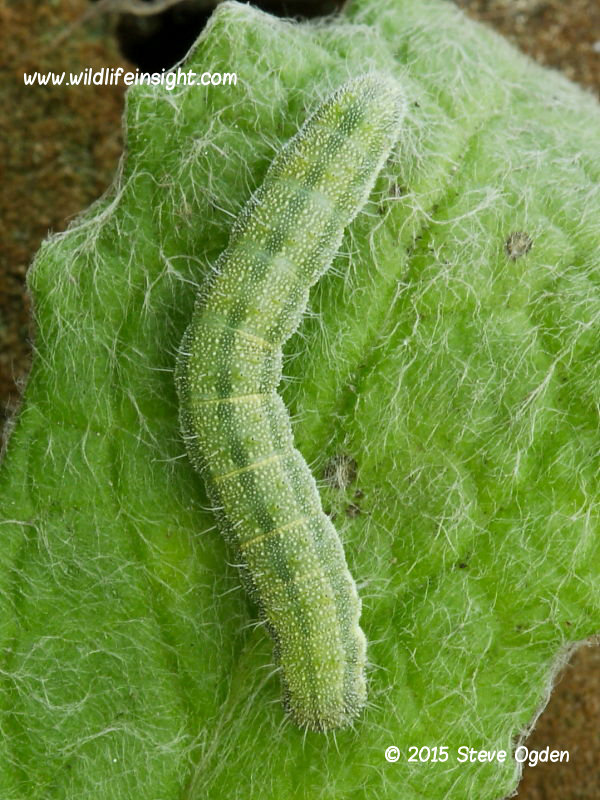 Large numbers of eggs are laid on the larval food plant – in the UK recorded on the flowers of Sticky Groundsel, Garden Marigolds, Common Restharrow and Fleabane.

The photos of the green form shown are of the same caterpillar when 8mm long and again when fully grown. It was found when 6mm long feeding amongst the tightly folded new leaves of Fleabane on the Lizard in Cornwall in June 2015 following an influx earlier in the year.

The caterpillars have also been recorded feeding on a variety of garden flowers including Petunias, Penstemons and Dahlias.

The caterpillars hatch within ten days and in high temperature are fully grown in less than four weeks.

Pupation takes place inside a slight cocoon in the soil or plant litter.

The adults emerge within 7-14 days dependent on temperature.

As well as being attracted to light the adult moths can also be seen nectaring at flowers during the day.

In hot temperatures abroad they may produce continuous broods but in the UK they are unable to survive the colder winters either as an adult moth, egg, larva or pupa. Consequently, even during years of large numbers of migrants arriving, it is unlikely that more than two broods occur in the warmest summers in the UK.