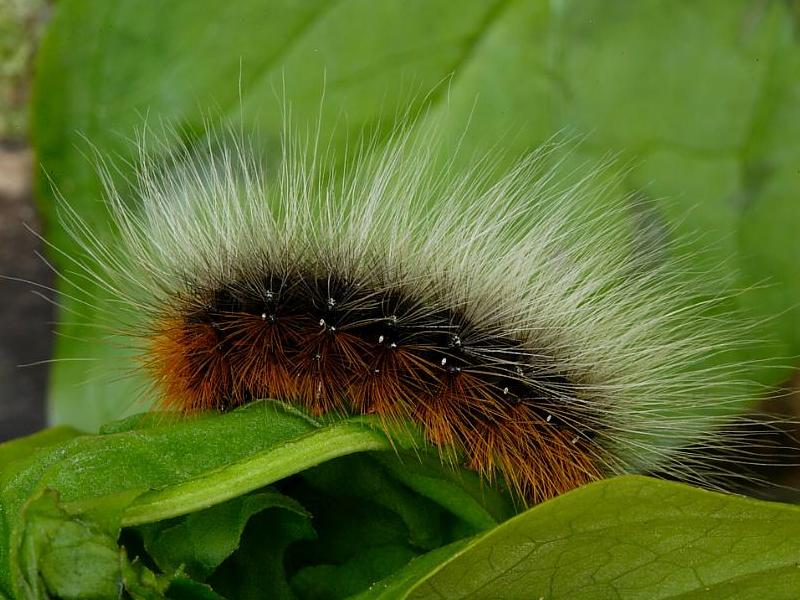 This North American caterpillar gallery has been added in response to the large number of caterpillar identification enquiries being received from US states and Canada.

The photos and sightings received will hopefully help others identify the most common caterpillars.

Caterpillars and larvae are terms used for the larval stage of an insect.

Please note that there are some hairy caterpillars found in many American states and Canada with hairs that can cause allergic skin reactions. Stinging caterpillars of North America

To simplify finding a caterpillar in the galleries species are broken into more commonly described terms and do not follow the scientific names and families.

Other insect caterpillars/larvae of North America

When identifying caterpillars the following pointers may be helpful.

Many caterpillars radically change appearance as they grow and moult (change skins).

Counting the legs may help by placing the caterpillar in a certain order or family of insects.

Some caterpillars found in the United States may also occur in other parts of the world and although the English species name may differ the scientific latin name will be the same. An example being Orgyia antigua which is better known as the Rusty Tussock Moth in the US but called The Vapourer moth in the UK.

So when identifying a caterpillar it may also help to look at the British caterpillar gallery which also includes some species occurring in other countries and continents of the world.

There is still much to learn about the early stages of many moths and butterflies. Whilst every effort is made to provide accurate identifications and information errors could occur. Should an error be spotted please let us know.

Several species of caterpillars are pests of trees and crops. These include several species known as Cutworms that feed low down among the roots and lower foliage of crops.

The caterpillars or larvae of other insects such as beetles and sawfly are also major pests of many agricultural crops and garden shrubs.

This photo of Eastern Tent caterpillars was taken by Amanda Fingerson in the state of Idaho.

More are featured in the Hairy Caterpillar gallery 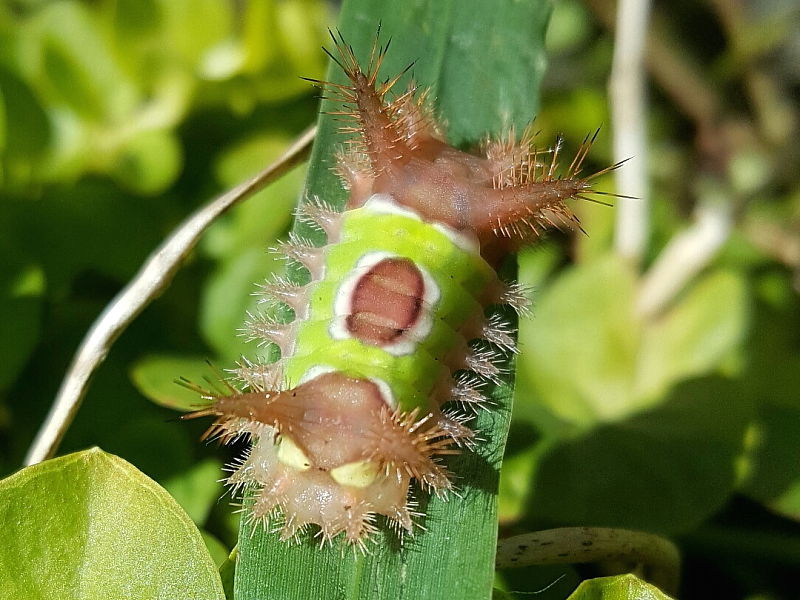 The extraordinary looking Saddleback caterpillar, Archaria stimulea, is a common species in much of North America.

It’s a member of the Limacodidae family of moths which are best known for the stinging hairs of their caterpillars.

Every year there are many reports of Saddleback caterpillars, also referred to as slug caterpillars, stinging people in many states.

It is one of the most frequently enquired about caterpillars and the one shown left was recorded by Shawn Williams in North Carolina. 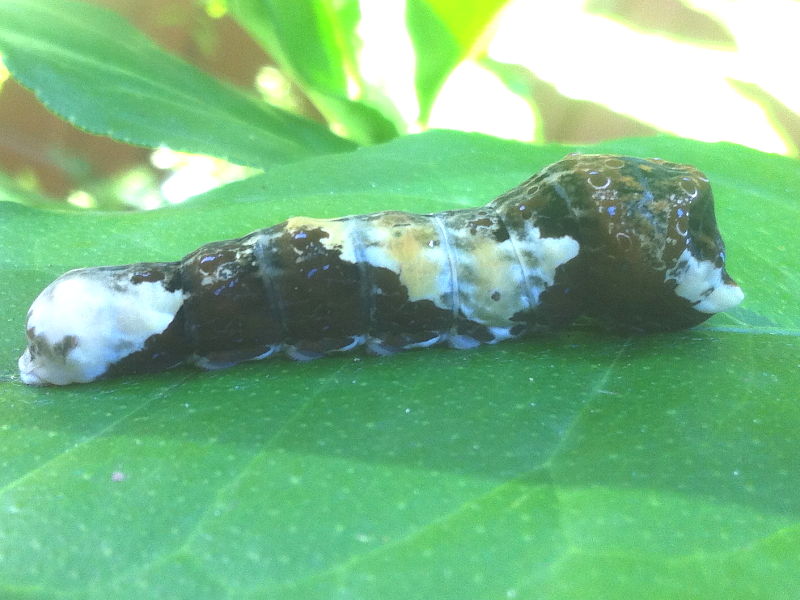 Fortunately most caterpillars are harmless and play a vitally important part in our ecosystem.

Many pupate and emerge as beautiful butterflies and moths to be enjoyed and appreciated by all.

This photo of the caterpillar of the beautiful Giant Swallowtail butterfly was sent in by Laura Wilder taken on a Citrus Tree in her garden on the Gulf Coast of Texas, USA.

These beautiful butterflies have caterpillars that resemble bird droppings to avoid detection by predators.

Largest caterpillar in the United States 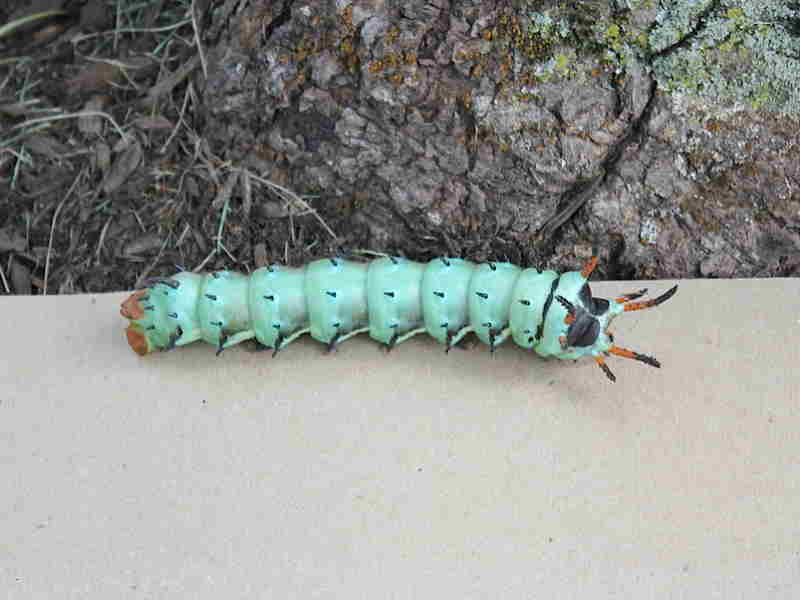 Many caterpillars are less than 2 inches long but some are much longer.

This Regal Moth caterpillar is one of the largest caterpillars found in North America reaching almost 6 inches in length and was recorded by Johnathan Pace in the state of New Jersey.

Caterpillars in this family are found all over the world and often easily identified by their tail spikes.

Some of these are featured in Large caterpillars of North America 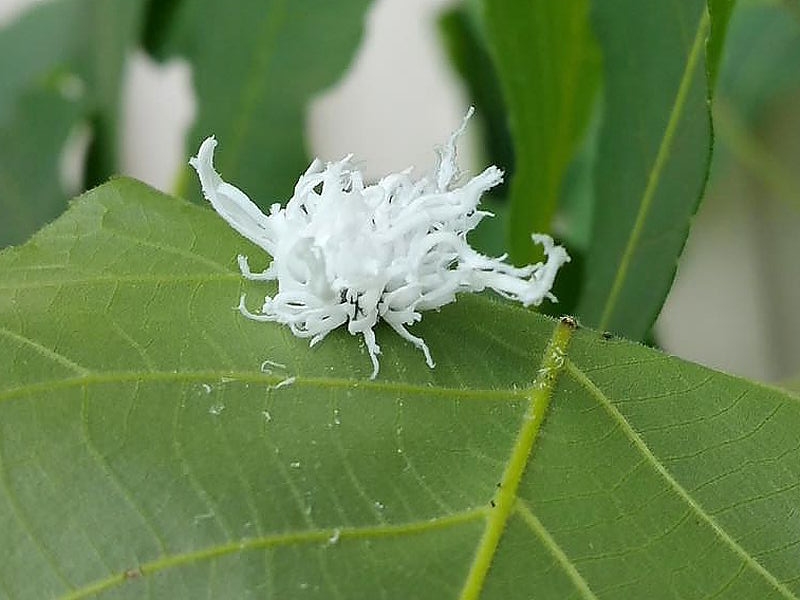 Some caterpillars in the United States look so extraordinary that it’s not always immediately obvious they are actually caterpillars.

Often the first task is deciding which order of insects such as butterfly or moth (Lepidoptera), fly (Diptera) or beetle
(Coleoptera) a caterpillar belongs to.

This photo of the extraordinary Butternut Woolly Worm, the caterpillar of the sawfly Eriocampa juglandis, was received from Gill Gambon, taken in her garden in Rockland, in the state of Massachusetts.

These are just a sample of your enquiries. Many more of your images will be added to the gallery with accreditation and those of particular interest included in a ‘latest sightings’ news item – so please keep sending them in to Steve Ogden – email address – wildlifeinsight@gmail.com

Please note: even if the caterpillar is not immediately identified the photo can still be added to the gallery for others to identify.

Other insects caterpillars of North America