Day 6 continued – Having completed our short looping detour of the Darling Farmlands and wild flower fields we rejoined the main R27 West coast road and continued on north. Our destination was Langebaan Lagoon in the West Coast National Park reputed to be one of the best birding sites in the whole of South Africa.

A direct drive from Cape Town, excluding our Darling detour, would have seen us arrive in the reserve in about an hour and a quarter. 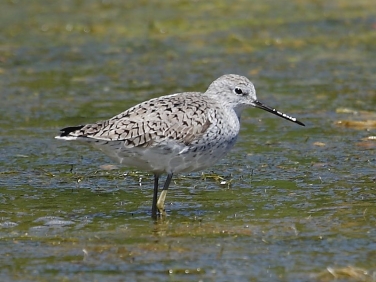 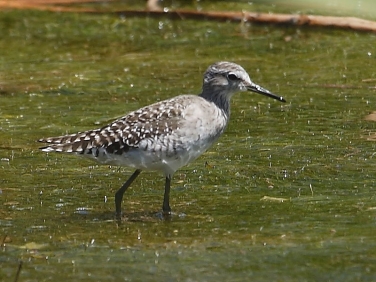 On arrival we began by visiting the Abrahamskraal Hide set amidst the saltmarsh on the southern side of the main lagoon.

Entering the hide we sat down and looked out onto a small fresh water pool surrounded by reeds.

Here we had excellent views of several familiar waders including Greenshank, Ruff, Little Stint and Wood Sandpiper. A Marsh Sandpiper was also feeding close to the hide and we had glimpses of a Black Crake as it streaked across the water from one reed bed to another. 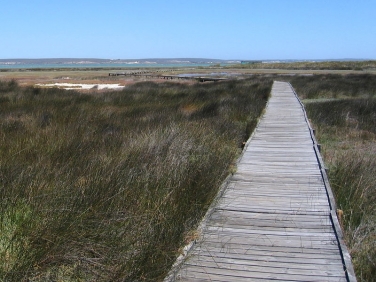 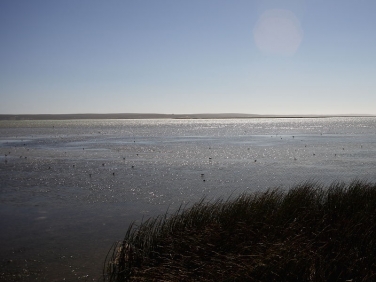 Although well worth popping into we didn’t stay long in the Ambrahamskraal hide as we were eager to move on to the main attraction – The Langebaan Lagoon, reputed to have some of the finest wader watching in the world.

Soon we were striding along the long timber jetty that extended out over the salt marsh to the Geelbek Hide. Built on the outer edge of the main reed beds the hide provides uninterrupted views over a vast expanse of the shallow salt water lagoon.

Eagerly we entered the hut and sat down in anticipation of sampling one of the greatest bird spectacles on earth. Wide eyed, we stared out at miles of featureless mud. The tide was out! Big time. Either that or there was a Tsunami on its way. 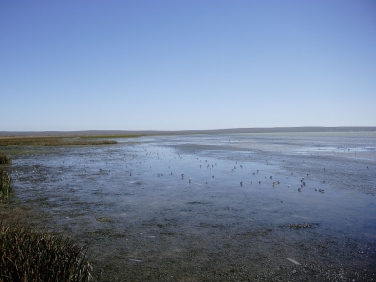 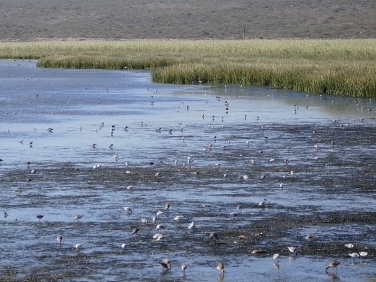 To this day I cannot recall whether we had planned it or were just plain lucky. I sense the latter as I don’t recall ever watch checking or rushing during earlier birding on the Darling Farmlands.

As any birder possessing any head constituent resembling a brain will tell you, for wader watching always check tides in advance.

Admittedly, there were a lot of waders out there but they were well spread out, with the majority merely distant specks.

However, within a few minutes of us sitting down and with the grumbles of disappointment still reverberating around the hide, the distant specks began to merge into a thickening, dark, shimmering line. Birds were heading our way. And not just ones or twos but hundreds, possibly even thousands. 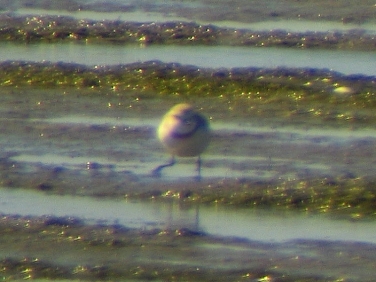 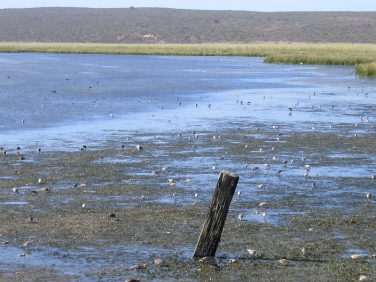 Scanning with the scope they came into focus. Before long tiny Chestnut-banded Plovers, a local speciality, were identifiable-just! I placed Claire’s compact camera against the scope eye piece to grab a record shot. Soon the scope became redundant and crippling views were had through binoculars. So flat was the landscape that the line of incoming water could be watched creeping at almost walking pace across the mud, pushing the birds on in front.

Waders began dropping in on the fast diminishing mud 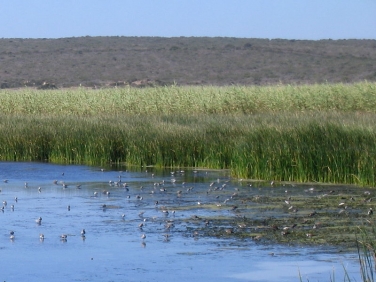 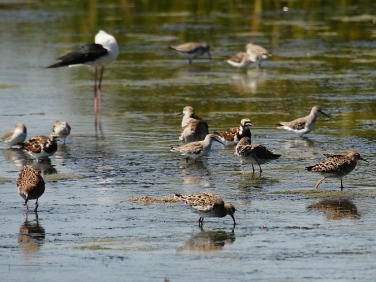 As the water closed in on the hide even more waders, having been dislodged from other parts of the lagoon by the incoming tide, rained in on the fast diminishing mud. Curlew Sandpipers, Turnstones, Black-winged Stilts, Ruff, Kittlitz’s Plovers, Sanderling, Egrets, Ibis, Herons – there didn’t seem to be anything extraordinary but the numbers and spectacle made the occasion.

It seemed barely a few minutes had passed by since we’d sat down and been faced with a plateau of featureless mud. The time information attached to digital images would later show it was about a thirty minute window of wader fest.

And now the waders were paddling around the hide stanchions and up against the reeds on either side.

I actually found myself standing up trying to see birds beneath the hide window.

Waders close to the Geelbek hide 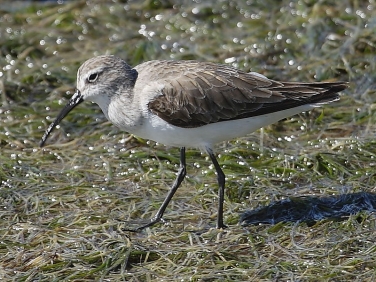 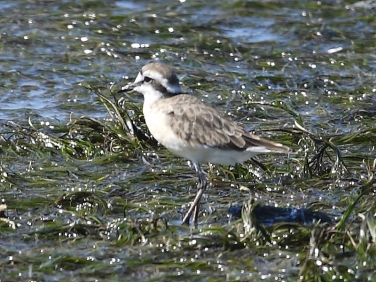 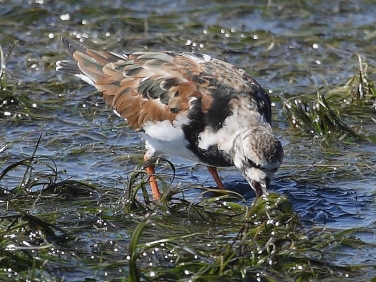 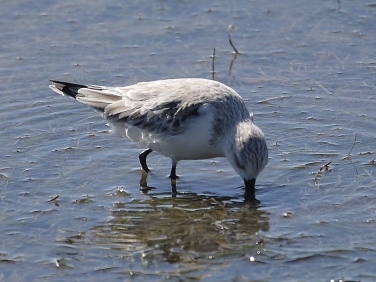 During this unforgettable event the only words exchanged between us were a string of bird names uttered in reverent tones – with the odd accompanying phrase yet to be formally entered into the oxford dictionary, used to succinctly describe unfurling events! Birders will understand. 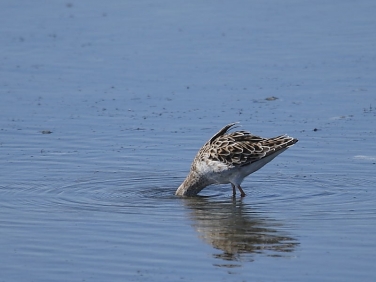 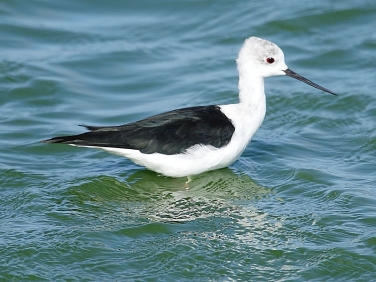 The importance of tide tables when birdwatching at Langabaan!

Then it was all over. First the small waders dispersed finding the water too deep, shortly followed by slightly longer legged ones such as Stilts and finally with water lapping their underbellies, the Herons, Ibis and Egrets also yielded to the rising tide and departed.

For about 45 minutes we’d witnessed some of the best close up wader watching we’d ever had anywhere in the world -but how close we had come to missing out!

There may have been other places around the lagoon that would have been as good or even better at different stages of the tide. We did in fact check out the Seeberg Hide which proved ill timed as the tide was already well past its best. Although a Black Harrier on the way was some compensation.

I can only surmise that the Geelbek hide would have experienced a similar spectacle once the water had retreated from the reed beds on the ebb and the first patch of mud become exposed. We had, for once, been incredibly lucky – or, as I would tell everyone later, our research and scrupulous study of tide books beforehand had paid off. 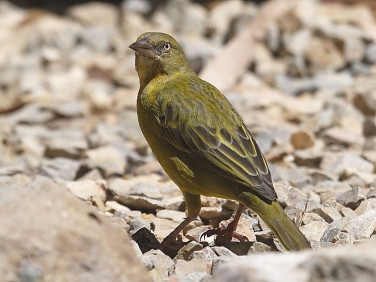 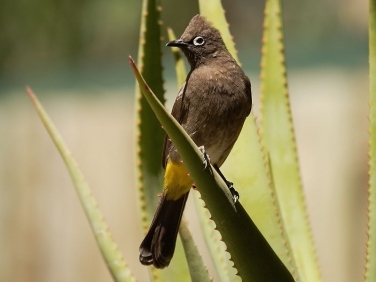 Fresh from our wader fest we sought a celebrative refreshing drink and refuge from the sapping heat in the Geelbek centre. We sat down at an outside table beneath a canopy and sipped pure orange juice.

It was good to be relieved of the weight of cameras and other optics. But, as ever, put the camera down and up pops a bird. First a Cape Weaver bird landed on our table and began mopping up some crumbs. Then a couple of Cape Francolin begun strutting around our feet as if they owned the place.

A Pied Starling was slightly better mannered, only venturing as far as the adjoining table. And a Cape Bulbul watched our every move from a nearby plant. 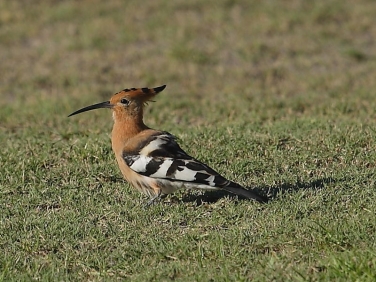 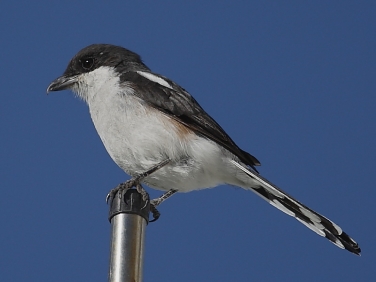 On a verdant nearby lawn, an African Hoopoe was probing for worms and on an over hanging television aerial a Fiscal Shrike sat looking out for insects.
The real stunner, though, and one that had me off my seat and running with camera in hand was an absolutely fabulous male Pin-tailed Whydah still in breeding plumage that showed fleetingly in a nearby stand of trees – its red bill, black and white plumage and trailing tail feathers compiling to make one of the smartest birds of the trip. Previous ones we’d seen further south had all lacked the breeding plumage and scarcely been pin up material. 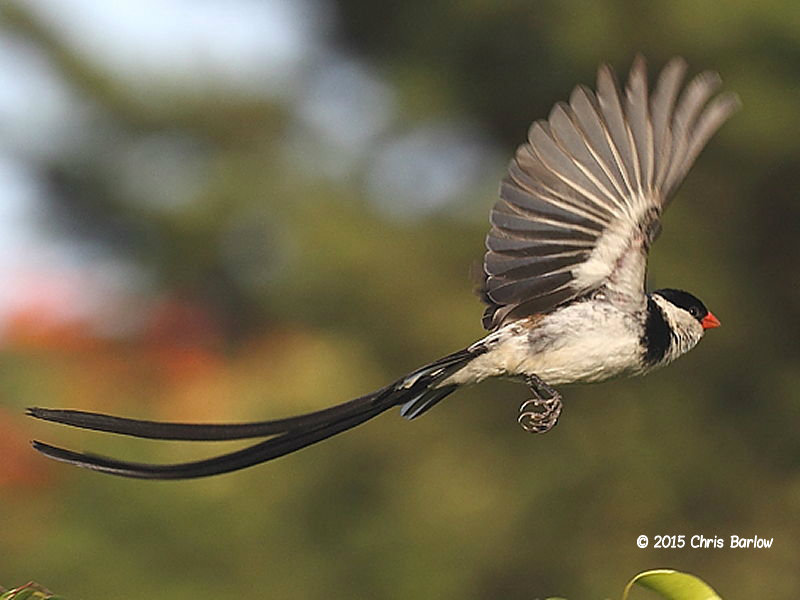 My description doesn’t do it justice and it was a real shame I didn’t manage a photo – particularly as my wife didn’t see it!

I am grateful for this image received from Chris Barlow taken of a Pin-tailed Whydah in Kenya – thanks for reminding me Chris!

All in all we’d had a cracking day. And so, with the sun already sinking in the sky, we headed back to another night spent, chilled glass of wine in hand, porcupine watching from the balcony of our holiday accommodation back on the Cape Peninsula.

Simply put, a visit to the Langebaan Lagoon will be one of the first places we’ll build into our travel itinerary when we return. I whole day will be set aside to explore the surrounding lagoon habitats. I might even consult a tide book! It would be good also to try and fit in the Berg Estuary system further north, another wader mecca, but this would probably require a two day excursion from the Cape.

Day 7, we simply had to fit in a visit to the Boulders Beach African Penguin colony one of South Africa’s most popular wildlife attractions.