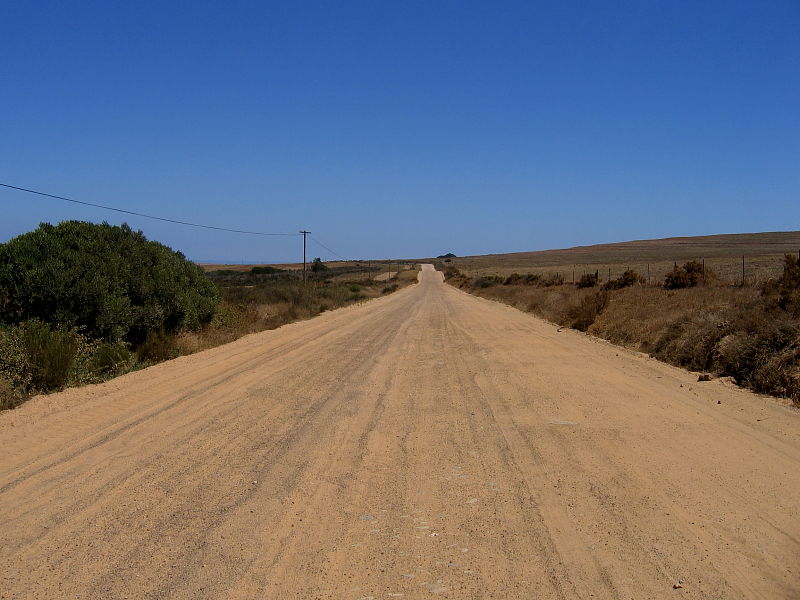 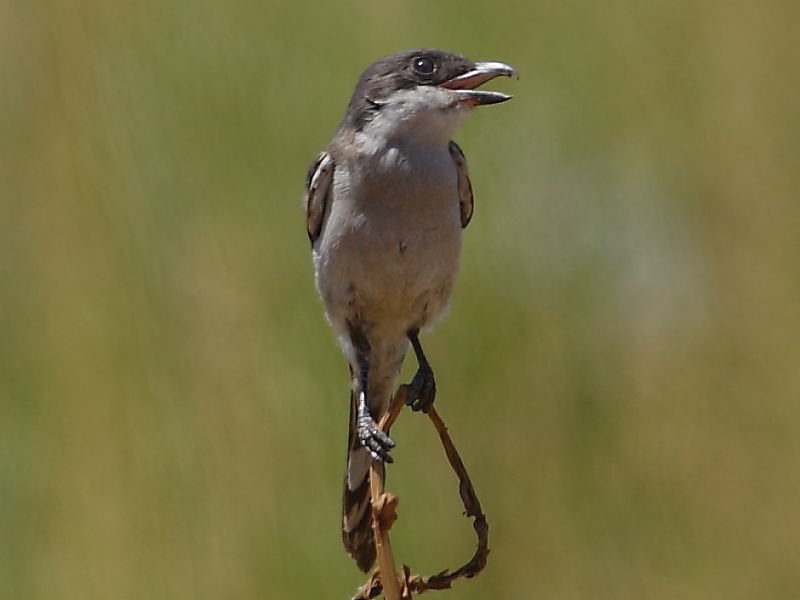 On the way we made a short detour across the Darling farmlands. It was notably hotter here than on the coast with the fields looking parched. Even birds such as a Fiscal Shrike looked to be struggling in the heat. At first sight the fields looked pretty baron but with patient scanning revealed plenty of bird life. Consequently the ‘little’ detour took us over two hours! 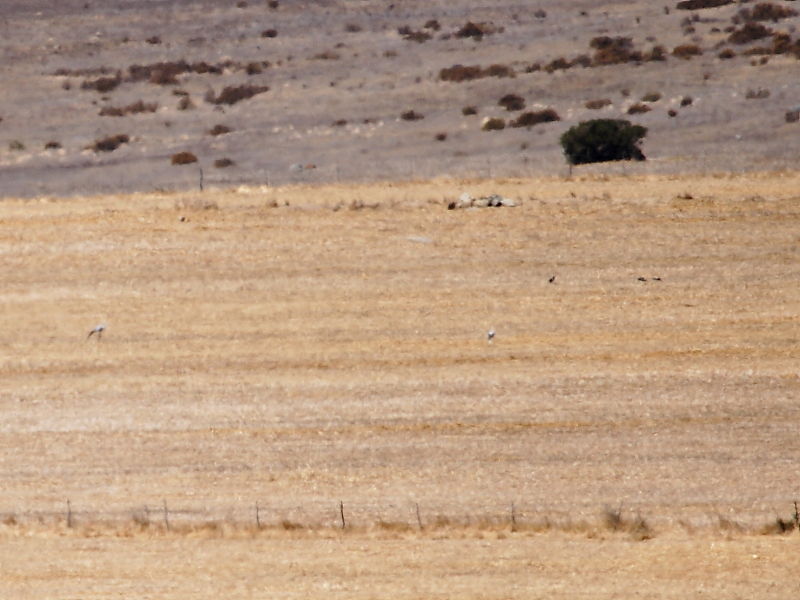 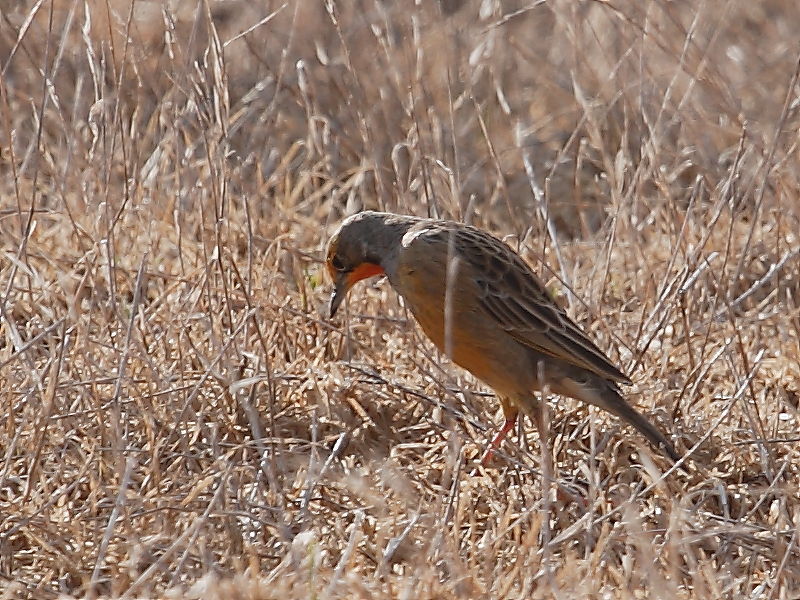 Many of the farmland birds were disappointingly distant. Several Blue Crane and two Southern Black Korhaan were feeding in far away stubble fields. During our two week stay we didn’t manage to get good views of Blue Crane, which was a regret as they are South Africa’s national bird. On all accounts we would have seen plenty if we had travelled away from the West Coast to the Overberg region in the east. Anyway, we did see some – check above left image! The endemic Cape Orange Throated Longclaws were also frustratingly too far away to really appreciate their dramatic yellow and orange plumage. 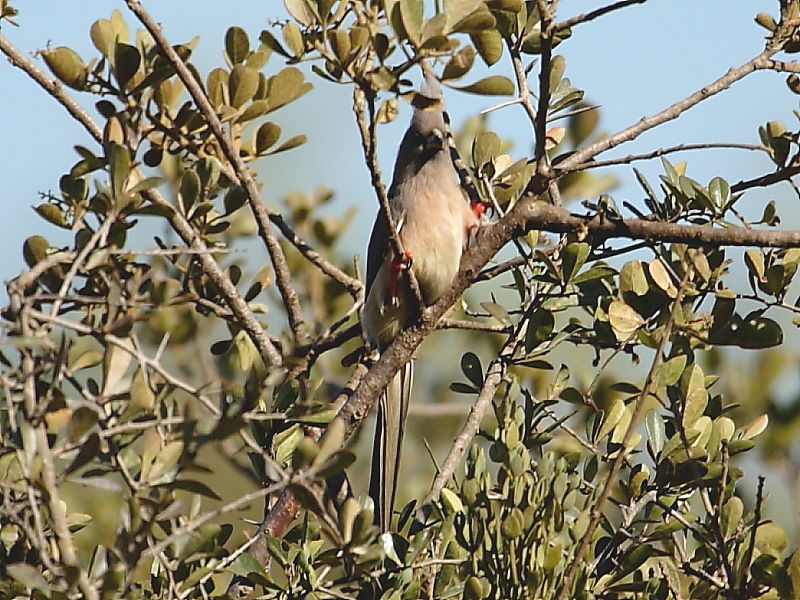 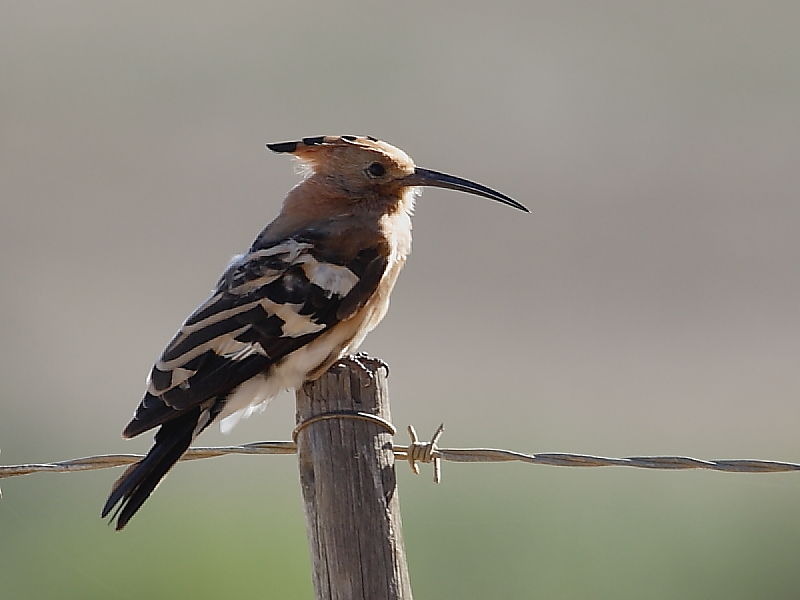 Amongst the bushes lining the road we saw Mousebirds with their long tail feathers. Deciding which were Speckled and which were White-backed wasn’t always easy but we left satisfied we’d had both species. Our first African Hoopoe was photographed through the passenger window as we passed it perched on a fence. 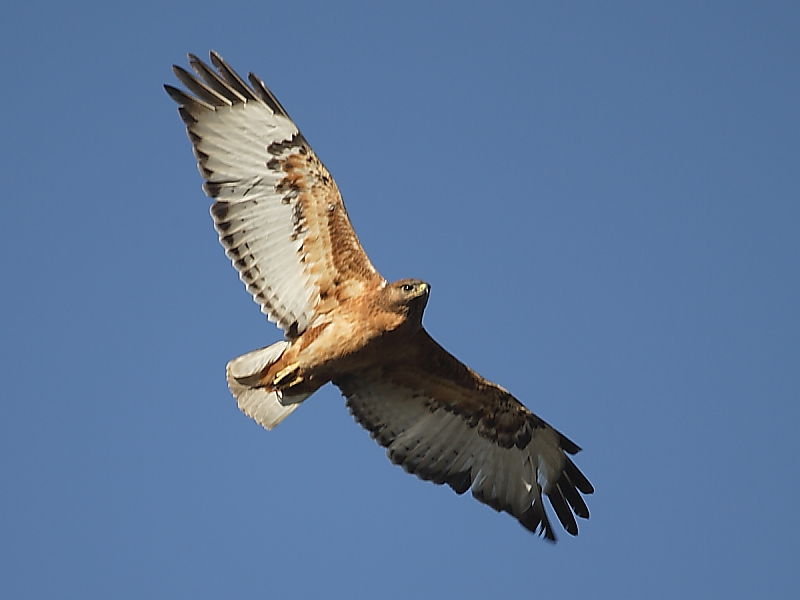 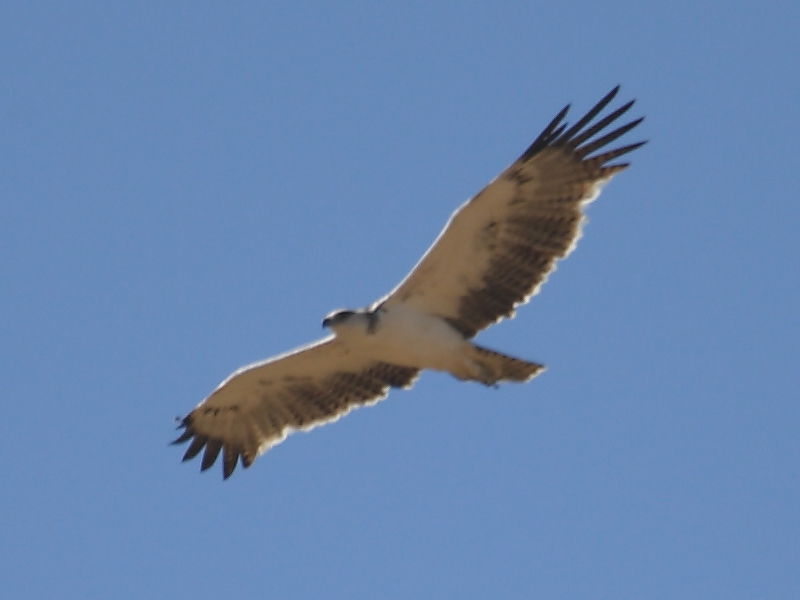 One of the highlights of this little detour over open farmland were the amount of raptors either sitting on posts beside the road or in flight. The most common being Steppe Buzzard and Yellow-billed Kite, but we also saw Lanner Falcon, Rock Kestrel, Black-shouldered Kite, Jackal Buzzard and a very dark species of Eagle. The pick was an unexpected fly over by an immature Martial Eagle. While several others went unidentified. 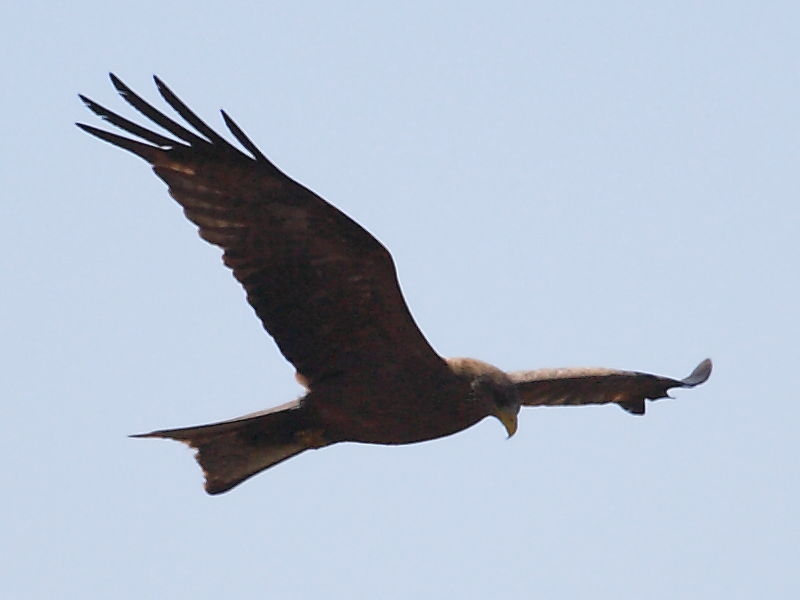 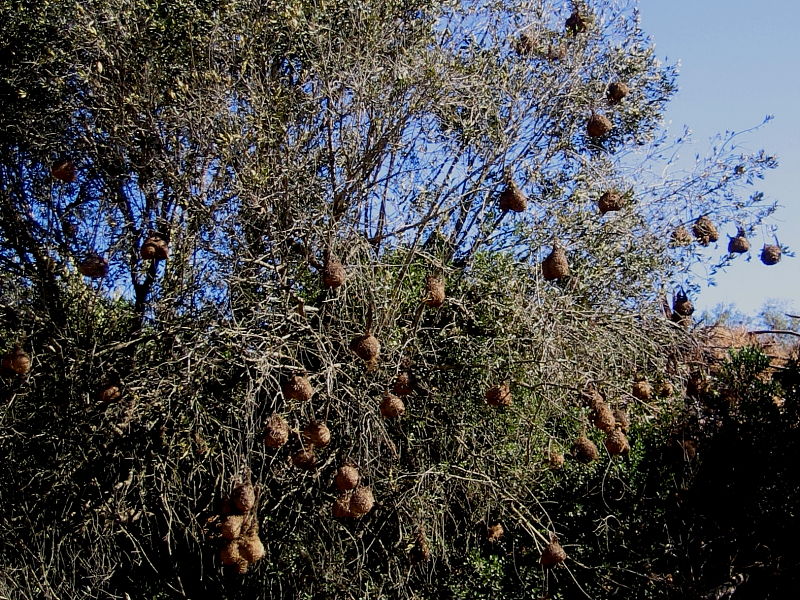 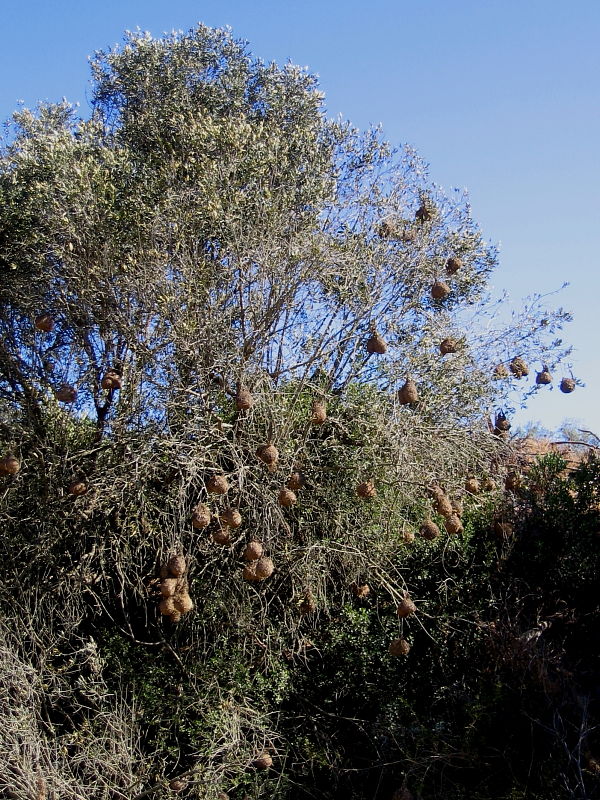 We passed one copse of trees dripping with weaver birds nests. And sitting it out in full sun were two Spotted Eagle-Owls. 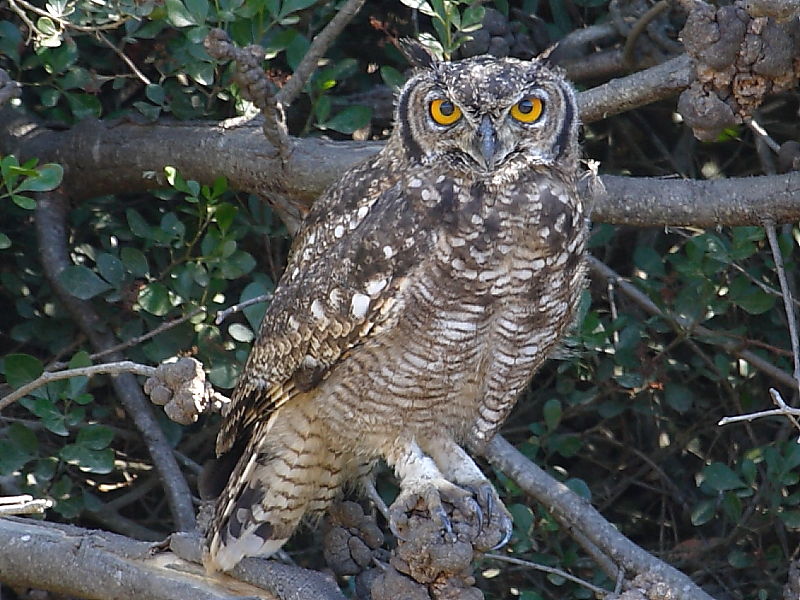 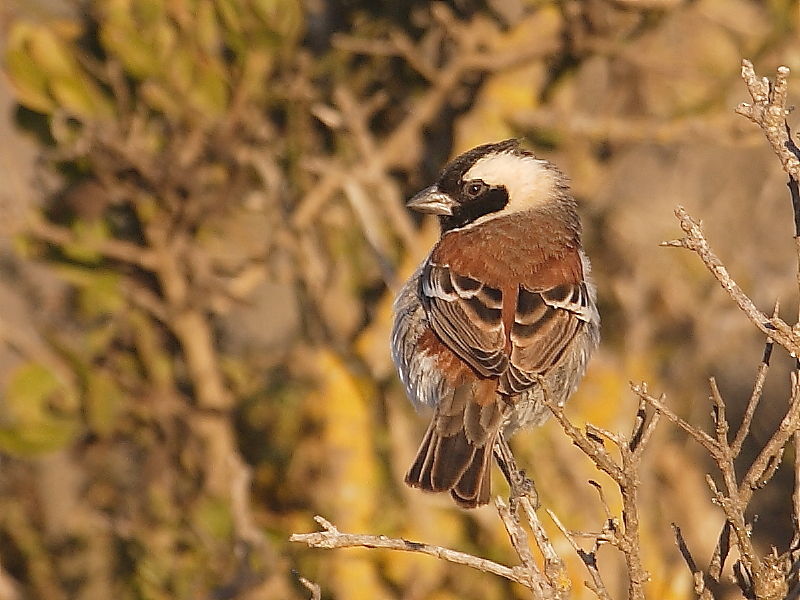 It seemed rather strange to pass two Spotted-eagle Owls sitting on a branch in full sunshine close to the road. The bushes held a few Cape Sparrow and we passed beneath an African stonechat sitting on some overhead wires. I tried in vain to photograph a Chestnut Vented Tit Babbler – smashing name that – sounds unapologetically filthy. Spurring me on to grab a photo it skulking in the bushes was the outrageously infantile thought of being able to recite its name while doing a slide show. 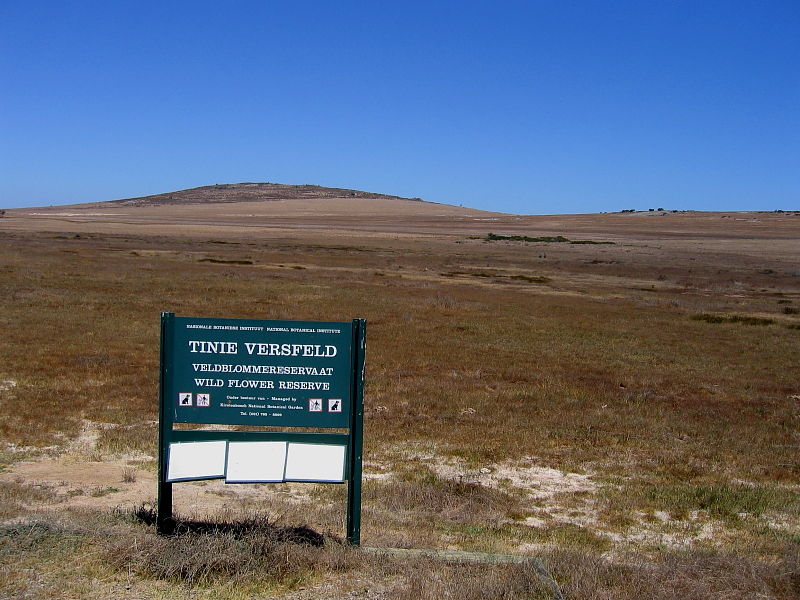 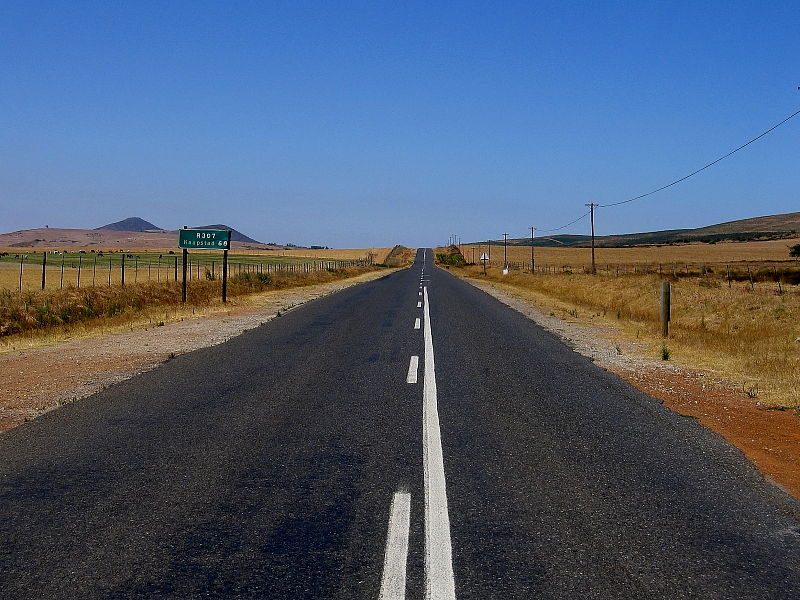 We stopped off for a few minutes at the Tienie Versfeld Wildflower fields. Being the wrong time of year we hadn’t any real expectations of seeing the riot of colourful flowers they are renown for. So it came as no surprise when we were confronted with uninspiring brown fields. A Spring visit would have seen a stunning multi coloured sea of wild flowers.

Without delivering anything too sensational it was a well worth detour. The raptors being the highlight and just the sight, however distant, of Blue Cranes was reward enough. During our stay we weren’t to travel often into open farmland and so this gave us a chance to see different habitat and species that we would otherwise have missed. As ever, with more time, we would have been certain to have seen more species in this open countryside.