Following Kirstenbosch National Botanical Gardens, Strandfontein, Paarl Bird Sanctuary and Paarl Mountain Reserve this would be the fifth dramatically different habitat we were to experience in less than 5 days.

Being only a short drive from our holiday accommodation it wasn’t too much of an effort to be at the entrance to the Cape of Good Hope Reserve by 8am.

As we drove in the early morning mist reduced visibility giving the impression of a bleak moorland with windswept low vegetation and sparse birdlife. 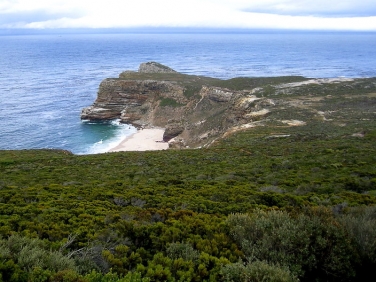 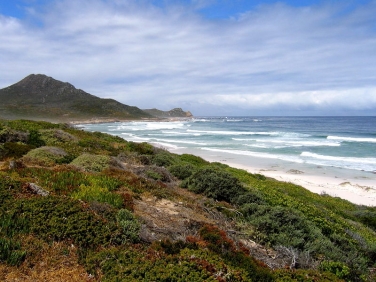 And in some ways for the birder that would be an apt description particularly when the proteas and heathers aren’t in full flower to attract the sunbirds and sugarbirds. But for the botanist it is a veritable Garden of Eden having over 1000 species of plant and eleven that are not found anywhere else on earth.

However, there is, of course, another very good reason why everyone, regardless of them being either a botanist or birder, pays the entrance fee to enter the Cape of Good Hope Reserve – it is the only access point to Cape Point, the most southerly point of the African continent. 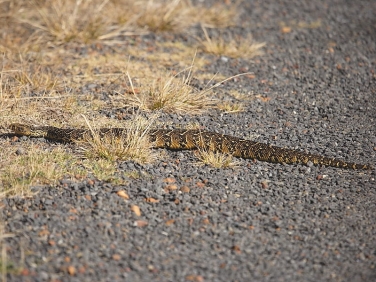 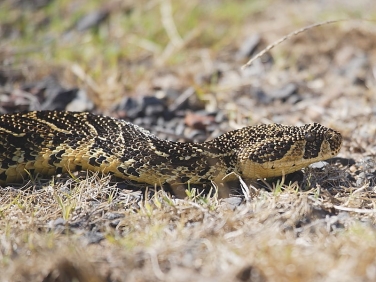 Fortunately, as we drove slowly through the fynbos down a well surfaced road, the sun broke through to disperse the mist.

We hadn’t gone far before a large snake lying in the middle of the road brought us to a sudden halt. Now, I regularly photograph adders in Cornwall, so what I don’t know about snakes isn’t worth knowing! It was obviously static because it was too cold to move and was trying to absorb heat from the road surface. An immobile snake was an opportunity not to be missed! And yet another opportunity for my wife to question my reasoning. 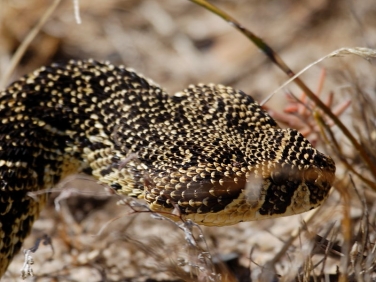 Even if I close my eyes today I can still see its scales gliding quickly across the view finder as I lay focusing on its head for a close up. … ‘too cold, can’t move!

There is an acceptable reason for the image right being blurred – it was moving and so was I!

Later I learnt that it was a Puff Adder, one of the fastest striking snakes in the world and responsible for more deaths in Africa than virtually any other reptile.

They also happen to feed at night, so aren’t dependent on the heat of the sun to raise their body temperature sufficiently to release a lightening strike.

If I’d paid attention to the large warning sign at Strandfontein on day 3 showing pictures of 5 deadly snakes I would have recognised it and made full use of the telephoto lens.

This sighting did somewhat dampen our enthusiasm for brushing through low vegetation in search of the elusive Hottentot Buttonquail.

Apparently the Cape is the best place in the world to see this species- we failed miserably. 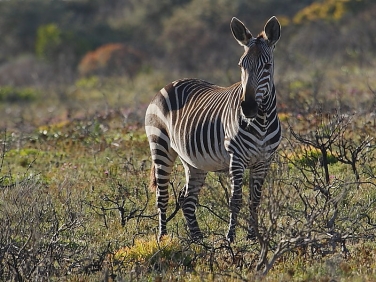 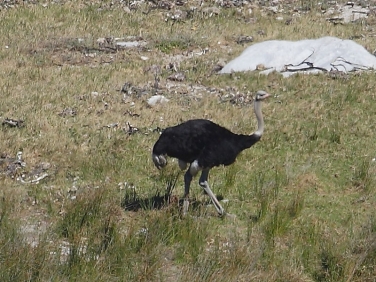 Big animals of the Cape Peninsula 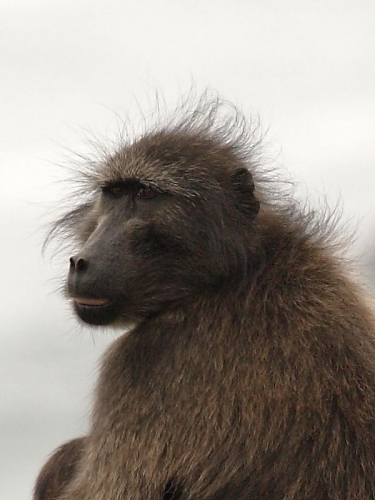 Just as the Puff Adder had been a surprise then so too where the handful of Zebras, Bonteboks, Baboons and Ostriches.

We hadn’t expected to come across any large animals.

The big African five may have been absent but it was as close as we were going to come on this trip to experiencing a big game safari.

Baboons on the Cape

We heeded the warnings about the Chacma Baboons which have a reputation for entering the cars of tourists and stealing food and bags.

Having lost their fear of people some have become dangerous.

Just the way they stared at you suggested they weren’t to be trusted, having a real ‘up yours’ attitude.

One large male baboon we regularly saw sitting beside the road outside Cape Town never failed to put two fingers up to us as we passed.

Birds of the Cape of Good Hope Reserve 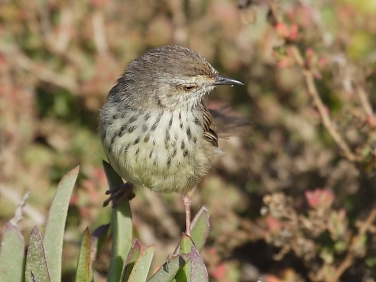 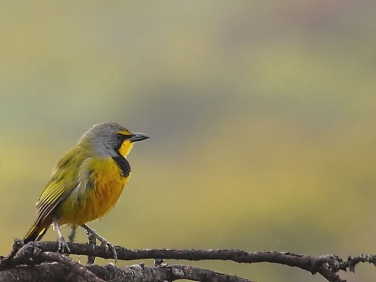 Birds of the Cape of Good Hope

Birds weren’t prolific in the low lying scrub but good views were had of a few species such as the common Grey-backed Cisticola and a very colourful Bokmakierie. 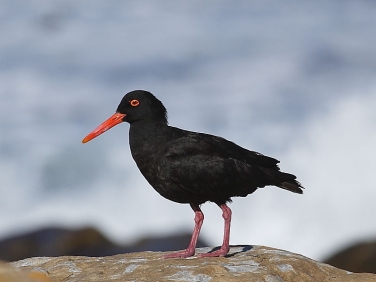 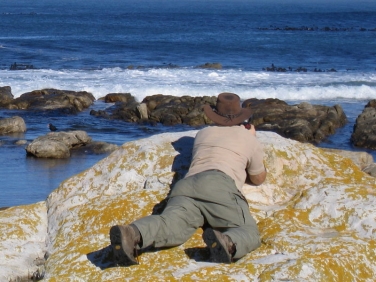 In places around the Reserve’s coastline the fynbos petered out onto stunning sandy bays swept by white rolling surf. We had lunch watching African Black Oystercatchers feeding amongst rocks and an assortment of gulls and terns flying past. Lunch was interrupted by an urge to wriggle across rocks on a quest for yet another photograph of an African Black Oystercatcher. In great light and set against blue water and white surf they make an irresistible image. 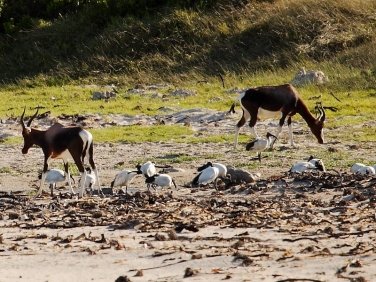 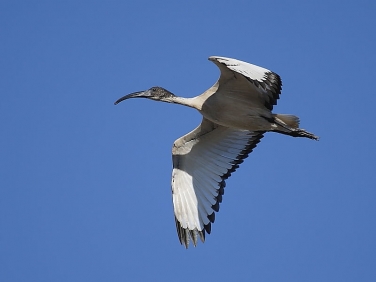 On one sandy beach we came across a small herd of Bontebok and flock of African Sacred Ibis feeding amongst seaweed tossed up above the high water mark by the Atlantic rollers. 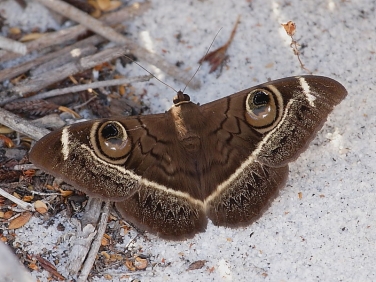 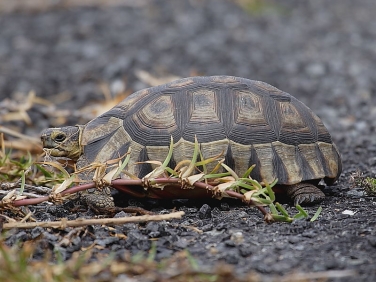 Whilst gingerly walking through the scrub, eyes checking the ground for snakes, we came across a stunning Striped Owl Moth. This beautiful insect came as a reminder of the huge diversity of moths there are in South Africa – many yet to be scientifically described. It was also the first of several rather painful reminders that I didn’t have a moth trap with me. It really is impossible to do anything but scratch the surface of any countries biodiversity in two weeks – let alone somewhere as uniquely diverse as South Africa.

As it turned out the Puff Adder was the only snake we came across during the whole of our South African holiday. Lizards were the most common reptile seen and we came across tortoises of variable sizes in many different habitats.

After lunch we drove up to Cape Point, the landmark that understandably most people making the journey to The Cape of Good Hope come to see.