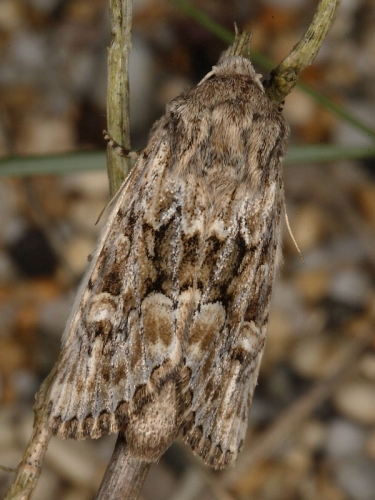 It’s not everyday that I’m invited to see and photograph a moth species new to me.

And certainly not one as fascinating as the Sandhill Rustic with its four subspecies, Leechi, knilli, guennee and demuthi, each differing slightly in appearance, having different larval food plants and living in varied and isolated populations in the British Isles and South West Ireland.

Of the four subspecies of the Sandhill Rustic the form Leechi is the one found in a single exposed coastal location of Cornwall.

Recently a group of us led by Adrian Spalding, a leading expert on this species, spent a few hours of darkness searching by torchlight a shingle bar on Cornwall’s South West coast.

It should be noted that this SSSI site is owned by the National Trust and the taking of specimens of Sandhill Rustic is prohibited.

Due to the species extreme localised distribution any collecting and trampling could jeopardise its survival. 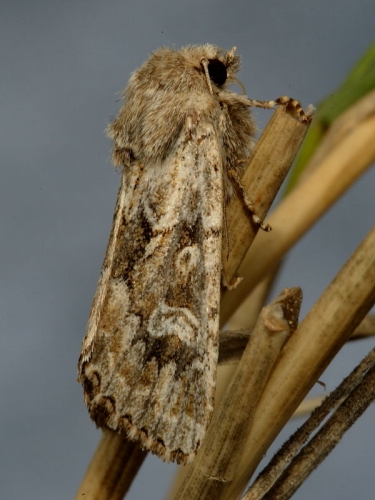 For many of us the night turned out to be a fascinating introduction into a moth that manages to survive in such an exposed coastal location, frequently doused by salt spray and threatened by inundation from the sea.

The adult moths have even been recorded swimming and are able to survive submersion in water.

During the evening several Sandhill Rustics were found sitting up a few inches off the pebbles on Sea Couch, the larval food plant.

We were even fortunate to witness a female laying her eggs in the stem of the food plant.

As the night progressed we learnt more from Adrian about the distribution of the other subspecies and how their habitat and larval food plants differ.

Many thanks go to Adrian Spalding for sharing his knowledge and Lee Slaughter for helping to organise what turned out to be a memorably enjoyable and informative evening for all.

Book on the Sandhill Rustic

Adrian Spalding will be publishing a book on the Sandhill Rustic in due course and an update on publishing dates will appear on this site once received.
Adrian’s web site can be seen at http://www.sandhillrustic.org/