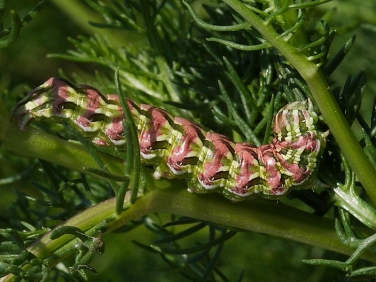 The fully grown Chamomile Shark caterpillar is one of the most striking and easily identified caterpillars to be found in the British Isles.

The caterpillar shown right was spotted on Sea Mayweed on the cliffs at Porth Joke, near Newquay.

July is often the best time to find these caterpillars when they are feeding up in preparation for pupating in the soil.

Identifying the adult Chamomile Shark moth from The Shark, Cucullia umbratica, is not so easy. 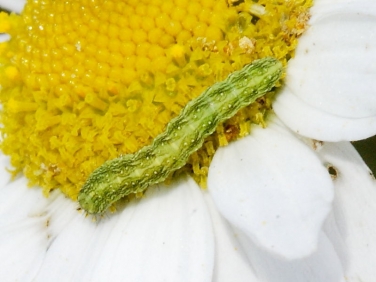 Identification of the Chamomile Shark caterpillar

The caterpillar can be found between May and July and is about 45mm when fully grown.

Surprisingly for such an outrageously marked caterpillar the Chamomile Shark can easily be over looked.

In strong sunlight the shadows cast by the Sea Mayweed’s narrow leaves match the green stripes on the caterpillar.

Early instar caterpillars (shown right) lack the dramatic pink colouring but can still be found fairly easily when feeding on the flower heads of the larval food plant.