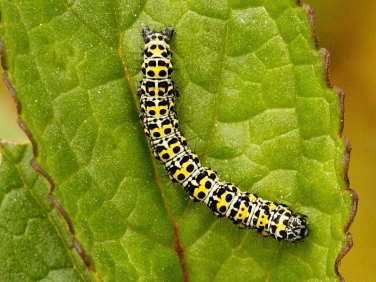 The Mullein moth caterpillar is particularly easy to identify with its strikingly bold yellow and black markings set against a general off white body, sometimes with a hint of blue.

We have received many emails of Mullein Moth caterpillars being reported on garden Buddleia bushes from many different regions of the British Isles.

Other food plants this caterpillar has been seen feeding on are Figworts and Mullein. 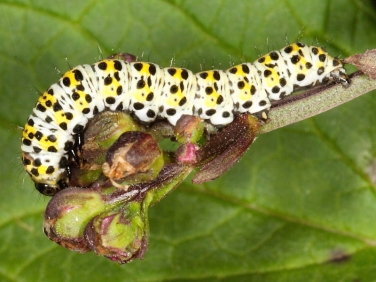 The images shown are of early and late instar Mullein caterpillars recorded last week on Figwort on waste land near Truro, Cornwall.

The fully grown caterpillar was later fed on garden Buddleia for three days before it pupated in the soil.

And here it may stay, buried inside a tough cocoon, for as long as 4 years before the adult Mullein Moth emerges!

It is worth noting that the caterpillar of the Water Betony moth is similar to that of the Mullein Moth but it seems uncertain whether the larval form of this species has ever occurred in the British Isles.