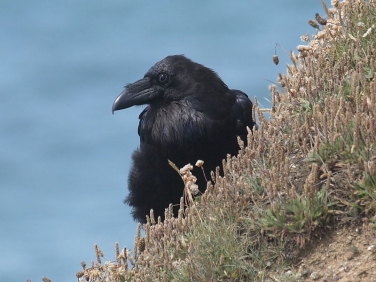 Fortunately for many people it’s not necessary to visit the Tower of London to see a Raven, Corvus corax.

Here, all around the rocky coastline of south west Cornwall, Ravens are almost guaranteed to be seen when walking the South West Coast Path or from any of the best sea watching places

However, they are wary birds and are frustratingly difficult to photograph with anything other an extreme long lens.

Often the best shots are of birds flying overhead. 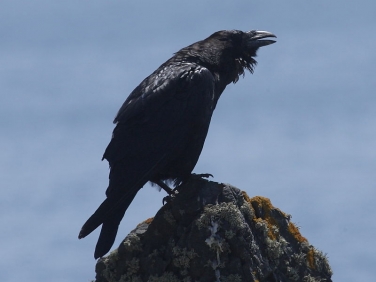 The best time to photograph Ravens is often when the juveniles have fledged and are sitting around on cliff edges calling for their parents to feed them.

The images shown are of recently fledged Ravens seen at Predannack Head on the Lizard and on cliffs overlooking Porth Joke near Newquay.

Their huge size, massive bill, bearded throat and ‘croaking’ call, the key identifying features of Ravens, were particularly well illustrated when these young birds were calling to their parents for food with extended necks.