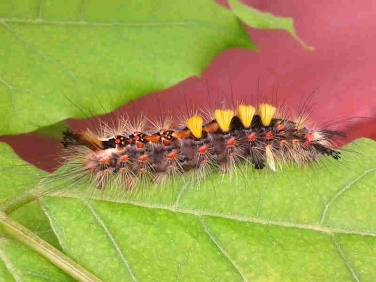 Amongst the many commonly seen hairy caterpillar identification requests recently received have been some more exotically marked caterpillars.

The most common has been the stunning Vapourer Moth (Orgyia antiqua) caterpillar reported in several different growth stages, known as instars.

It’s been noticeable how many have been recorded on Wisteria growing around houses and in gardens.

Thanks go to Martin for the use of his photo (left) of a late instar, yellow tufted form, Vapourer Moth caterpillar seen on Wisteria in his garden. 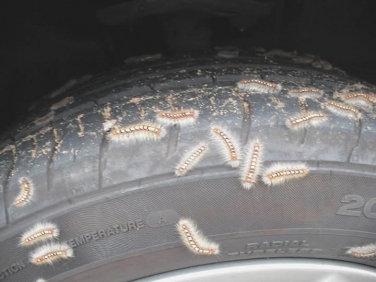 Another fascinating image was sent in by Paul of White Satin Moth (Leucoma salicis) caterpillars crawling over car tyres close to the banks of the Trent in Nottingham.

These were preparing to pupate and soon after being photographed began to disperse.

This was another example of how some caterpillars seem to seek out warmth in preparation for pupation. 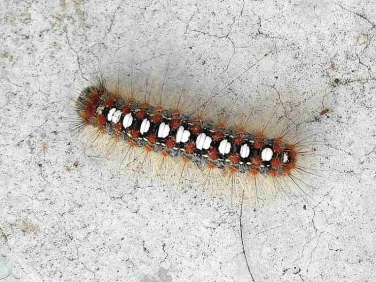 Further updates of caterpillars to follow will include some exotic species imported on vegetables and reared through and more Brown-tail caterpillar sightings which will include an account emphasising the potential health hazard of these caterpillars.

With your permission we would welcome the use of either good or interesting photos to share with others on this site. Email addresses will not be published.