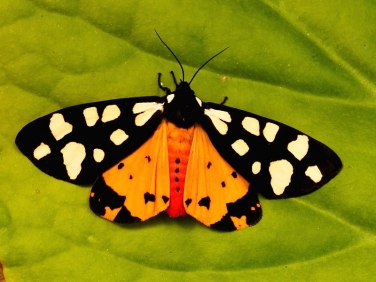 At the time it had seemed likely that the caterpillar would have been parasitized and all I’d receive for my hair brained antics would be a face to face confrontation with an ichneumon wasp.

But fortune favoured the brave (stupid) in this instance and the magnificent insect shown left was the reward.

Other Tiger Moths with hairy caterpillars – The Scarlet Tiger, The Garden Tiger, The Ruby Tiger, The Jersey Tiger 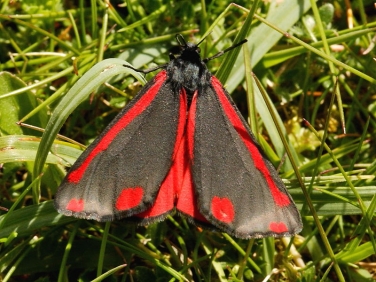 For keen photographers the real bonus of rearing an adult moth is that when it emerges it is normally in pristine condition.

So often when finding and photographing specimens of lepidoptera in the field they show signs of wear.

Frustratingly, in many cases it isn’t until the images are viewed on the computer that tares and little nicks in wings become evident.

The Cinnabar Moth right was still inflating its wings when seen last week but already had a hole in its wings. More about Tigers in Cornwall