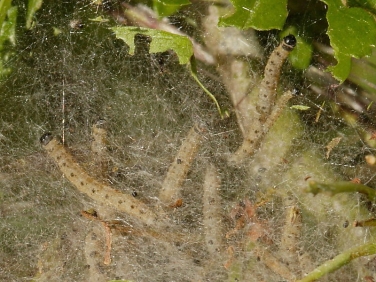 During a search for Lackey moth webs at Penhale Sands we came across three small webs containing hundreds of tiny caterpillars.

Although too early to be certain of the caterpillars identity, being on Hawthorn suggests they are likely to be the larvae of the Orchard Moth Yponomeuta padella – see more on caterpillar webs

Should this be the case then over the next few weeks these bushes and any vegetation nearby may become covered in webs. 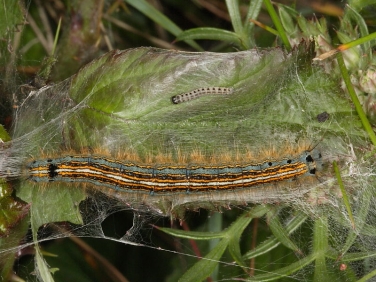 As reported in past sightings some of the webs that these moth caterpillars spin can create an extraordinarily supernatural spectacle.

Any plant or shrub in their path will be covered in a fine web.

Even fully grown Lackey caterpillars such as the one shown right may become part of the web if stationary for long enough.