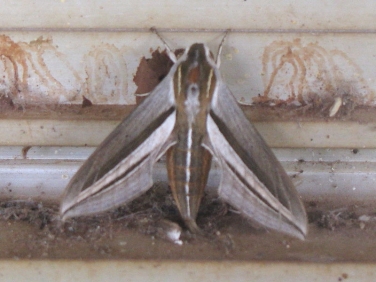 I have no doubt this is just a small sample of the amazing moth species attracted to their bedroom lights! I really can’t wait for the next batch. The images of Australian Privet Hawk Moth and Impatiens Hawk Moth (Theretra oldenlandiae) (shown above left) will join the Langia tropicus Hawkmoth previously sent.

The Noctuid Donuca orbigera (shown above right), also called “white banded”, really is an extraordinary species. It gives the startling impression of a face with big eyes and a row of teeth which, I presume, is designed to frighten off predators.

Apparently its underwings and abdomen are orange and if disturbed during the day appears orange in flight. 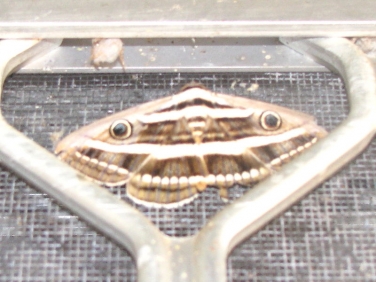 There are reports of Australian Magpies chasing these moths into grasses only to fly off without them. Whether this is because they could’t find the ‘orange moth’ they’d been chasing because once settled it had changed its appearance or, maybe, it had been frightened off by the threatening facial expression. Whatever, what an amazing creature and, once again, many thanks to Anne-Marie, Bradley and, of course, Madi, for leaving her bedroom light on!

How about leaving it on all night and seeing what’s there first thing in the morning?

Please note my Australian moth knowledge is limited and so cannot always be certain of identifications. Should anyone have any suggestions for alternative identifications I’d be pleased to receive them.