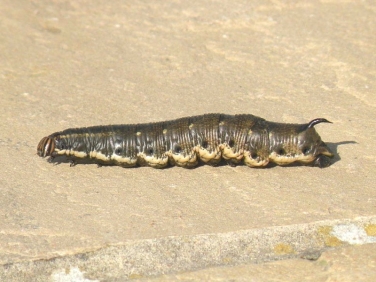 Although this species is a regular migrant in small numbers to the Uk its caterpillars are rarely found in the wild. The caterpillars feed on Field Bindweed and allied plants before pupating in the soil but are unable to survive our cold winters.

Peter has since told me that he had a similar caterpillar in his garden a few years ago. So, besides being positioned in a favourable location on the south coast for migrant moths, it seems likely there are plants close to his house encouraging the females to lay eggs. Many thanks to Peter for contacting us and allowing us to use his images.

The adult Convolvulus Hawk-moth is one of the largest moths likely to be seen in the UK with a wingspan of up to 120mm. It also has the longest proboscis of any British moth which it uses to sip nectar from deep within the trumpet like flower heads of plants such as Nicotiana, the tobacco plant.

It is not unusual to see these huge moths hovering at flower heads as the light fades and they can sometimes be watched at night in the light of a torch. The species is regularly attracted to light and can occasionally be seen during the day on garden walls and fence posts, although easily overlooked.

Reference: “Colour identification guide to the Caterpillars of the British Isles” by Jim Porter, “Field Guide to Moths of Great Britain and Ireland” by Waring,Townsend and Lewington.