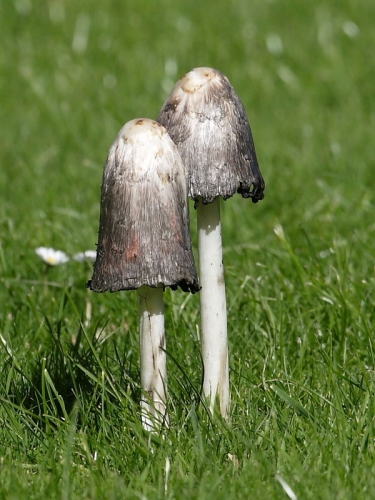 There’s a lot to be said about photographing toadstools. Firstly, they don’t have a nasty habit of flying off and, secondly, they can provide an image on a day that the birds and insects fail to show.

However, photographing toadstools, mushrooms and fungi in general may appear straightforward enough but when it comes to actually publishing the images on a public website certain issues arise that need consideration.

Firstly, these toadstools were in the middle of someone’s private lawn. The deed of pointing a long lens covertly through someone’s hedge and then to publish world wide the resulting images has been known in the past to cause a degree of public disquiet. Admittedly, these toadstools lack the same public interest as certain parts of the Duchess of Cambridge’s anatomy but, nevertheless, they too are an eye catching pair, belong to someone else and permission has not been obtained to take images of them.

Anyway, here is my cover-all – I haven’t a clue about fungi identification and nothing contained in this post should be taken seriously. I just happen to think they could be the Shaggy Ink Cap toadstool (latin name Caprinus comatus) also known as Lawyer’s Wig, which some people find delicious to eat but I would not entertain the remotest thought of eating as I haven’t got a clue what I’m talking about. And, in respect to the privacy laws relating to published photos, I consider these photographs and subject matter to be of indisputable public interest.