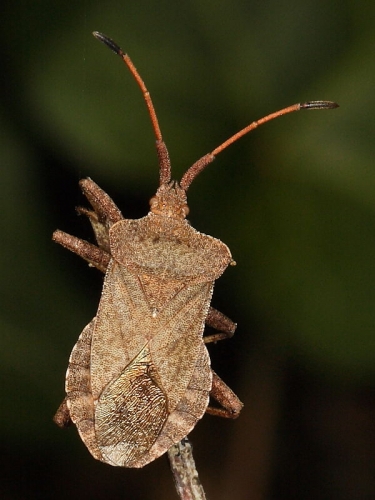 Of the 10 British species of Squashbug, Coreus marginatus, also known as the Dock Bug, is the commonest and largest species likely to be found in the southern half of the UK.

The larval stages, also referred to as nymphs, can be found from July until September feeding on the fruits and seeds of plants in the dock family.

The identification of the early stages of the Dock Bug is complicated by their rapidly changing appearance as they pass through each of the five instars before reaching adulthood by the early autumn.

Hatchings and larval development takes place over several months making it possible to find all instars including the adult form at the same time on the same plant. Seeing them together provides the ideal opportunity to study the differences between them and to take photographs.

An excellent time of year to find them is in late summer when they are feeding in the sunshine on ripening blackberrries and other fruits and seeds in preperation for hibernation. 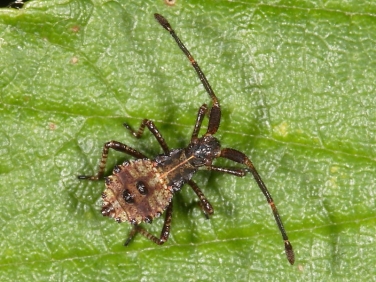 The selection of life-cycle images showing the various development stages of Coreus marginatus were taken with all the insects on the same Bramble bush.

The earliest larval stage (shown right) is already showing the charateristic long antennae of all squashbugs.

These Coreus marginatis nymphs would have recently emerged from a small cluster of eggs laid on the underside of a leaf in the spring by a female adult that had over wintered.

The second image (below left) shows the next development stage of the larva with the first real signs of elytra (wing casing) development but still having a narrow pronotum. 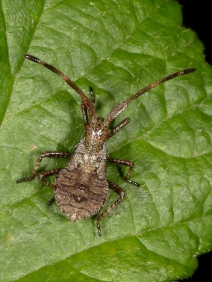 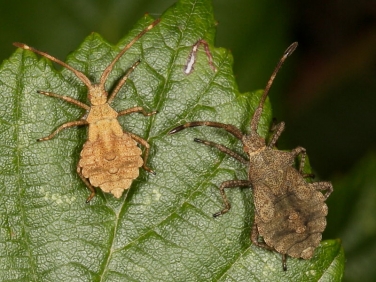 The larger final instar is much closer to the size of a fully grown adult with more developed elytra and wider pronotum. This species of Squashbug, in common with many other Squashbugs and Shieldbugs, tends to become darker with maturity as they approach winter and the particularly light coloured specimen shown is likely to darken with age.

The image at the top of this page shows an adult with fully developed elytra and broad pronotum and abdomen. This specimen is likely to have been an early developer as the adults, having overwintered and then bred, rarely survive longer than July the following year and these images were taken on 19 August. 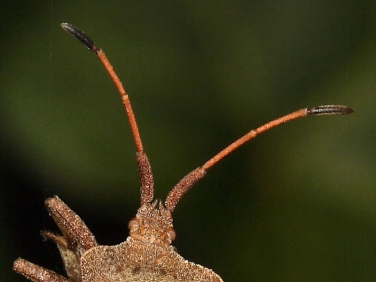 Identification of Coreus marginatus, the Dock Bug: Adult length approx 14mm, with a broad rounded abdomen, brown/greyish colouration, broad pronotum (like shoulders) and at the base of the two long black tipped antennae are two small horns.

The Box Bug is restricted to a small part of Surrey but is expanding its range. It has a narrower pronotum with pointed sides, a narrower abdomen and is an overall lighter reddish brown.

Enoplops scapha is a similar sized species which is a darker grey with a narrower pronotum and having contrasting creamy pale markings dotted around the edge of the abdomen. 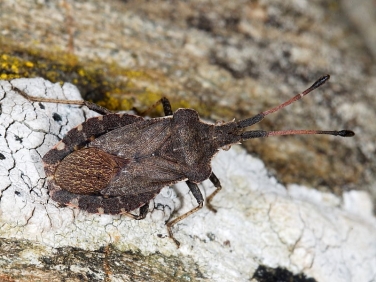 Other information: Squashbugs are members of the large Hemiptera order of insects known as true bugs. Within this group there are many families of insects and squashbugs are part of the order Hemiptera which includes their smaller Coreidae sub family.

They obtained their name Squashbug because of their pest status in the United States where some species such as Anasis tristis cause severe damage to squash crops.

In the UK the native species of Squashbugs have less of an impact on crops and rarely obtain pest status despite feeding on fruit and seeds. They have specially adapted mouth parts that they use to pierce plants and animals to extract juices. They are fully winged, have stink glands to ward off predators which have led them also being known as ‘Stink bugs‘.