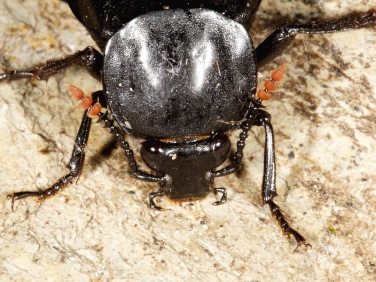 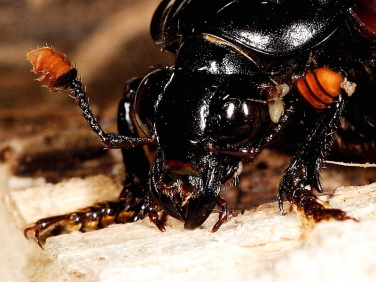 Identifying Necrodes littoralis and Nicrophorous humator, two large black British beetles, is not as difficult as it might appear at first glance. Although both these beetles have black truncated elytra, orange tipped black antennae and are of similar size, between 15 and 30mm in length, there are two features that help identification. The first is that the orange antennae tips of Nicrophorous humator are club ended whereas those orange tips of Necrodes littoralis are only slightly wider than the rest of the antennae and do not terminate so abruptly. See antennae identifying images above. 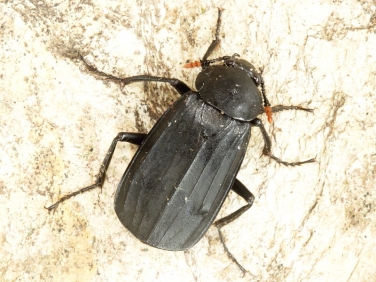 The second useful identifying feature can be seen by looking closely at the elytra, the hardened forewings covering the back, of Necrodes littoralis which have a bump about three quarters of the way down and which is absent on the elytra of Nicrophorous humator – see identifying image on the left.

As well as looking physically similar these two species of British beetle also share a similar life-cycle. Both are found throughout most of the UK between spring and autumn with Necrodes littoralis having a bias towards coastal habitat. Both species often fly at night and may be attracted to light and so are regularly recorded in moth light traps. Both beetles also feed on dead animals and lay their eggs on them providing the hatched larvae with an instant supply of food. However, whereas Nicrophorous humator is one of the burying or sexton beetles that buries its corpses, Necrodes littoralis feeds and lays eggs on carrion lying on the ground surface.