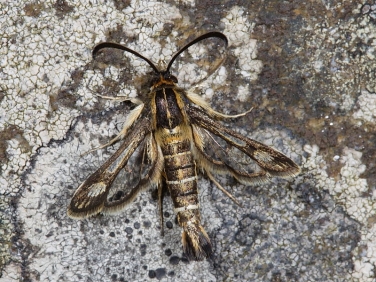 It’s not everyday that two species of clearwings are recorded in a single day without the use of pheromones.

Whilst photographing cliff top plants beside the South West Coast Path at Portscatho, on the Roseland Peninsular in Cornwall, my wife spotted a Thrift Clearwing (Synansphecia muscaeformis). Despite being a common species found all around the Cornish coast it is not often seen unless pheromone lures are used to attract the males.

Later, when checking out a bird calling from a small mixed copse of Blackthorn, Hawthorn and Willow trees just off the coast path, I was amazed to see a Lunar Hornet Moth (Sesia bembeciformis) settle briefly amongst the branches. Needless to say, as seems always to be the case, I had the wrong lens on the camera!

So I quickly took a couple of shots with the 400mm in the hope that with a bit of enlarging and image enhancing on the computer the shots would at least confirm the identity. It was just as well I did as it flew off before the macro lens could be fitted. Apologies for the poor image but I’m relieved I managed a record shot and was not left with the nagging thought it may even have been the rarer Hornet Moth! Restricted to Poplar trees and eastern England it may have been ridiculous to even contemplate the possibility of Hornet Moth but stranger things have happened. Anyway, I shall sleep soundly, as even from the poor record shot it is clear that there are no yellow shoulder patches on each side of its thorax that are diagnostic of Hornet Moth. 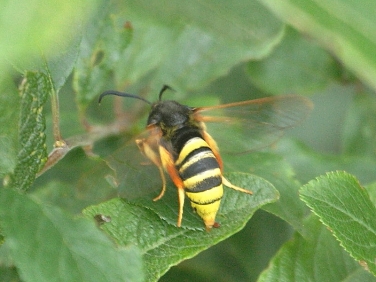 The Lunar Hornet Moth larvae feed for two years and pupate inside the trunk of willow and related salix species. The adult moth which has a variable wingspan of between 32-42mm and mimics a large wasp or Hornet is rarely seen unless just emerged and sitting on the bark of the tree.

Unlike the Thrift Clearwing their are no pheromones available to help the recording of this species which would suggest that it is probably under recorded. The most reliable way to locate them is to look for the old exit holes in the bark and then visit the site in the morning during July.