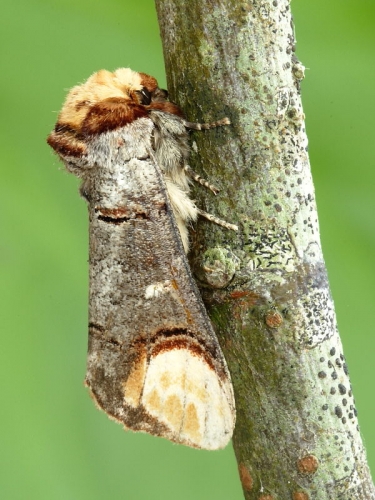 How can a species that is so difficult to see in its natural habitat also be one of the most recognisable species of British moth? Amongst over 2,600 different moth species of all shapes, sizes, colours and designs there is one moth, the Buff-tip, that once seen is rarely forgotten. Latest Buff-tip life cycle page with eggs, caterpillar and pupa.

During public moth events the Buff-tip never fails to receive the most gasps of astonishment from audiences. In fact, such is the amazement shown for this insect that I try whenever possible to take one along with me to show visitors in case one isn’t recorded on the night.

The Buff-tip certainly is an amazing creature. When settled on a Silver Birch twig the likelihood of it ever being noticed are very slim. Not only does its colour blend cryptically in with its surroundings but the blunt buff head looks just like a newly snapped off twig.

Having once been shown one of these wonderful moths, it is unlikely anyone will ever mistake it for another species as there are no other British species of moth that closely resemble it.

This species is a common moth found throughout most of the UK. It has a wingspan of between approximately 45-55mm and flies between July and August.

The 65-75mm long yellow and black caterpillars feed together on a range of deciduous trees until the final instar when they disperse and pupate in the soil beneath the food plant tree where they overwinter. The presence of Buff-tip caterpillars is often given away by large areas of the host tree becoming denuded of leaves.

About this moth photo and recording: Buff-tip attracted to an MV light, July 2012 in a Cornish garden.