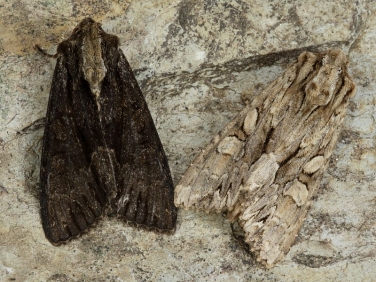 Dark Arches is normally an easily recognisable British moth but it does have other less common forms. Those of us interested in identifying lepidoptera soon learn to pick out the common Dark Arches quickly from amongst maybe as many as a hundred or more diferent moth species lured into a light trap in a single night. However, every now and then even a common moth can have you puzzled.

Inside my trap the other night amongst several normally coloured Dark Arches was an almost black one, the first aethiops form I’d ever seen in many years of recording moths. Apparently, they are more commonly seen in the north.

The image above shows a normal light coloured Dark Arches next to the scarcer dark form.

Many moth species have different forms, sometimes associated with different parts of the country. Often it is just a slight colour variation but some have more extreme melanic forms, appearing completely black. To make things more interesting, variations don’t end there with some species having variable patterns as well as colour differences. And if that isn’t confusing enough just when you think you have found a moth new to science it turns out to be an aberration of a common species.