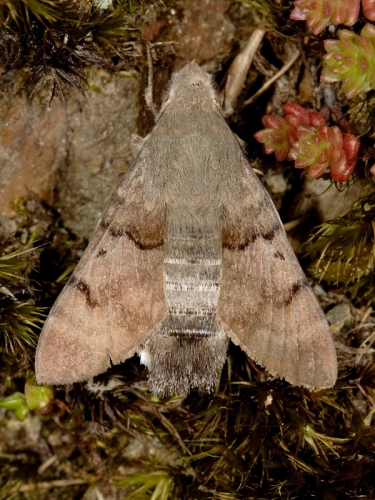 Migrants save the day. This years events, involving both daytime recording and night time trapping at brown field sites, are likely to have been severely hampered by the wet and windy weather sweeping most of the country. Certainly the weather was poor in Falmouth but we were lucky to have a brief interlude between the drizzle in which we enjoyed a walk around the moat and second world war gun emplacements surrounding Pendennis Castle in Falmouth.

Despite low temperatures and wind, the deep moat provided sufficient protection for a few hardy insects to be on the wing. 7 Red Admirals, 3 Painted Lady butterflies, 3 Hummingbird Hawk-moths and a single Diamond-back Moth were the migrants recorded. Most were reluctant to fly in the low temperatures and spent much of their time either feeding on Red Valerian or sitting on the stone walls.

Even the normally super charged Hummingbird Hawk-moths seemed reluctant to fly. One actually landing on the wall right in front of us providing a rare opportunity to photograph one with its wings closed in a stationary position.

The only resident moth species seen were Common Carpet, 3 Celypha lacunana, 2 Red-barred Tortrix and a Cream Wave together with one resident butterfly, a Speckled Wood. So it was just as well a few migrants were about. Of course, Falmouth has one of the mildest climates in the UK and so it would not be surprising if some of these species are managing to overwinter in such a sheltered location.